Source: Kickstarter Backer
Price: £10.99
Where To Get It: Steam

Attack on Cataclysm looks like an old school fighter. It has the story mode of an old school fighter: Two characters, standing in nothingness and talking to each other before character relevant fights (Everyone gets the “Go home and be a family man” type victory/defeat screens), and with the difficulty increasing as you get further in. 11 characters to compare to the frankly silly rosters of some modern fighters, including Jet, who the game as much as stated was “White Dudley” in the beta, Crow the creepy Shota (He plays a bit like Ryu or Guile from SF, but sounds like the creepy villains who’re “Only doing what’s best for you, darling”), and… Look, suffice to say, nearly every style of fighting, from chargers to grapplers is represented here, so thought was put into the roster. So far, so normal fightin’ game, right? 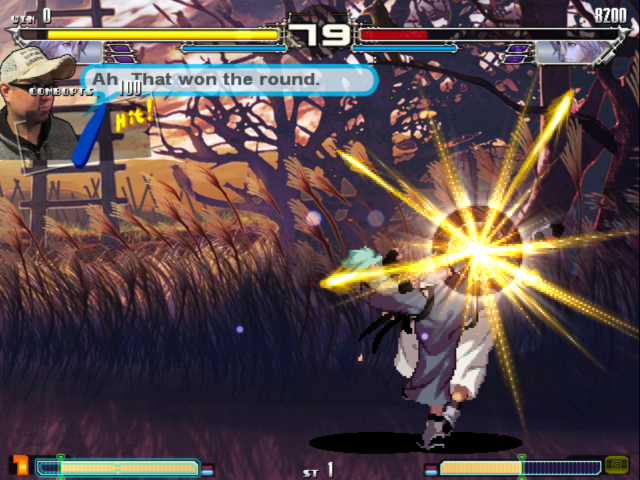 Attacks are pretty meaty, and use the SNK style direction + Low/High button.

Well… Not quite. The devs, you see, are ex-SNK, and they wanted to fiddle around with the formula, so there is no single block or parry. Sounds like a small thing, but in fighting games, little details like this matter. Specifically, it has a High-Low parry system. Two buttons for punching (Low and High), two buttons for kicking (Low and High), two button combos for throwing (Low and High), and two parries (Low and High). That last one is important, because if you get it right, you get to immediately counterattack, and will do more damage. Get it wrong, and not only will they get more attacks in, you’ll be completely open. Similarly, superjumps (down, then jump) are different, being lower when you jump forward, and they, also, have the risk of getting damaged more if somebody gets priority on you (IE – they hit first.) Don’t make the mistake of thinking that, because the controls are simple, and the special moves relatively limited, there’s no depth to this game.

So what does this mean? It means it’s a more thoughtful fighter, in a sense. Button mashing will mostly work against a normal CPU (Although bad matchups can obviously work against you), but against another player, you’re going to get wrecked harder than normal for attacking without consideration. It’s e-sports focused, and part of that can be seen in its social media plugin (Allowing you to tweet your victories/fights/losses), its tournament registry, and the commentators system. Yes, multiple commentators. Normally, in a fighting game, you just have one voice yelling things like WHAT A HIT or SPECTACULAR FAIL, but in Attack on Cataclysm, e-sports players and commentators like Kokujin (SFIII) or Kamichang (Soul Calibur 5) have recorded some lines of commentary, each with their own personalities, along with character commentary (so Chadha can tell you how bad your combos are), and you can pick between them (or, of course, have no commentator, for blessed silence while you beat the living snot out of your opponents without a sudden AIIEEEEEEE! Breaking your concentration.) 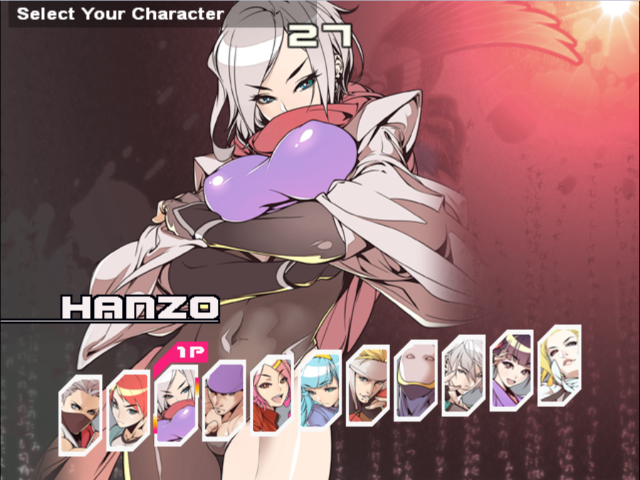 The game is alright, but the designs have a bad habit of boob-windows and spray-on clothes.

This isn’t to say I don’t have niggles. I have yet to find how to set my keyboard keys (It seems stuck in gamepad mode for key reassignment, and while I know a keyboard is “worse”, it still annoys), the game is always 4:3, so running in fullscreen is generally recommended (Leaving my windowed choices as Somewhat Small, or bigger vertically than my screen can handle at 2x, none of which are really optimal for me streaming my ass getting kicked), and the story mode seems a bit rough… Not in the sense of difficulty, I can generally beat Normal CPU in story mode, despite being relatively bad at fighting games, but in visual terms. Design wise, well… Hanzo in particular has a bad case of boob-window clothing design, and everybody has, to some extent or another, spray-on-clothing. Doesn’t make the game any worse in terms of gameplay, but I’m not a big fan of the ladies in this game, in terms of visual design.

For what the Yatagarasu team are asking for the main game, though (£10.99), it’s definitely worth a go if you like fighting games, although I personally think the pricing of the Custom Voice packs (£22.99) a bit much for something I’m not really going to use. Personal taste, I guess. 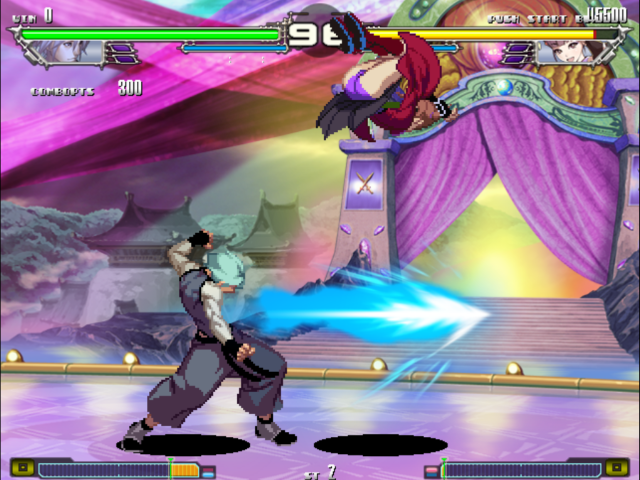 The Mad Welshman has a style known as Leap, Hit, and Pray He’s Not Parried. He proudly wears the bruises from sticking to this style.