Source: Review Copy
Price: £6.99
Where To Get It: Steam
Other Reviews: Early Access 2

The world of Caves of Qud (by Freehold Games, creators of Sproggiwood) is a harsh one. I’m too canny to starve, or go thirsty, but I’ve been killed by plants, by hyena-men, by mortars, and by bear-things that should not be. I’m having a whale of a time.

Genre wise, Caves of Qud is a roguelike set in a post-apocalyptic world. Three arcologies hold the last True Humans, who have all, in some fashion, been changed, and mutants are the “average” citizens. I’ve mainly been playing an Artifex, from the Ice Sheathed Arcology of Ibul, in the North, a caste not very good at fighting, but extremely good with the lost artefacts of the days where Things Weren’t Quite So Fucked. But that’s by no means the only option. There are four castes for each Arcology, and the variety of playing mutants, who start with much less money, but make up for it with powers like Light Manipulation (allowing them to not only light their surrounding area easily, but also create lasers by focussing light to a single, searing line). Of course, everyone has their flaws too, and no one build appears broken compared to the others. Perhaps because the world is so deadly. 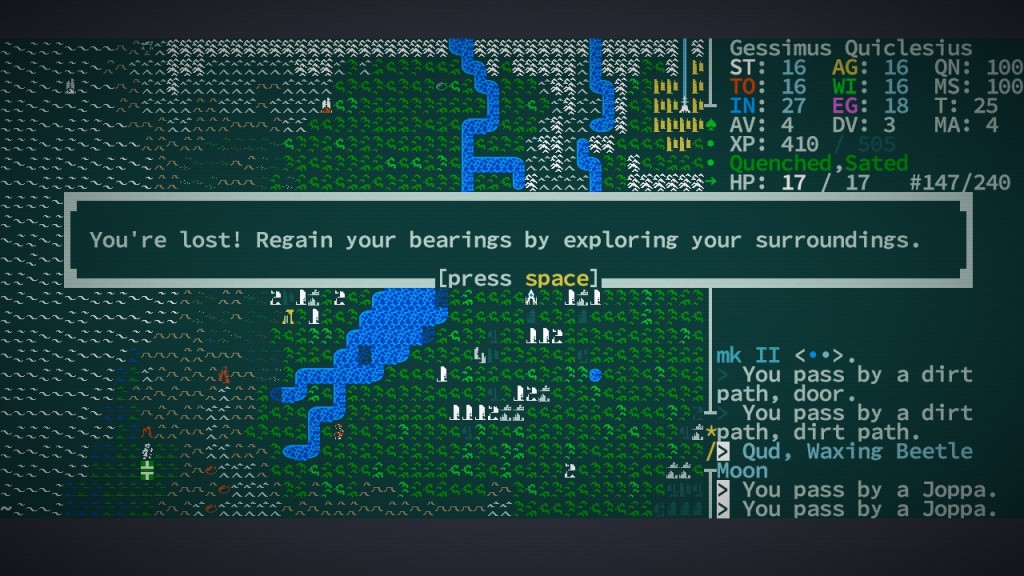 The world is big, and even a trip to the nearest ruin or cave can lead to unexpected trouble.

If you’ve never played a Roguelike, you may be thinking “It’s turn based, and the graphics aren’t modern and shiny, where’s the tension, where’s the excitement?”

You would be surprised. A good example would be a monster found semi-regularly on later floors of the very first dungeon, the Slumberling. Basically a massive, speedy, nigh unkillable bear that, if woken up, can rip you to shreds without much effort at all. Imagine he’s in the middle of a cave, and you’re passing him, step, by step… And then a Snapjaw Hunter (A hyena-man with a bow) fires at you. He didn’t hit the Slumberling or you this turn… But there’s going to be a chance, even if he’s aiming for you, that he misses horribly, and wakes the organic death machine up. In the end, it’ll only be a small comfort that, after dealing with you, it’s probably going to kill the Snapjaw that killed you. What’s your move? Shoot him? Block the arrows as best you can with your body, and hope he doesn’t kill you before you close? Or worse, miss you and hit that Slumberling? Even with the game being turn based, tension is definitely there. It’s just you have all the time in the world to think how you’re going to react to the situation. Still doesn’t mean you’re definitely going to make the right choice. 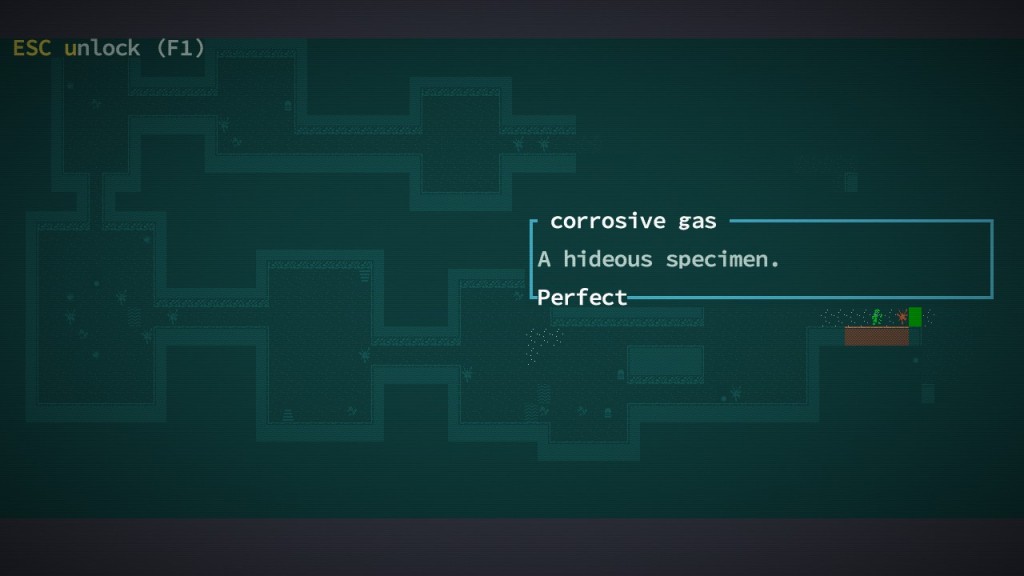 Enemies can use items just like you can. Case in point: This acid cloud didn’t come from me.

The interface for the game, as far as Roguelikes go, is actually quite good. Everything has a place, you can easily switch between inventory, or quests, or equipment, even if you went to one of the others without intending to, and everything is clear. The amount of artefacts isn’t huge, but it’s big enough that there’ll always be something you’ll find, providing you live that long, which makes you giggle and wiggle in your seat. And, if you want to stick with and master a single class, the option is there to replay your last character (Albeit with a different selection of equipment) There’s no single skill you have to have, and the skill tree gives you a fair bit of wiggle room. Do you go for Axes, tripping and headbutting enemies as you go? Long Swords, with a skill path that allows you to melee swathes of enemies at once? Or perhaps Persuasion, getting other people to do the dirty work for you, and taking the various traders to the cleaners instead of the other way around? There’s a lot of options, and I definitely enjoy that. Hell, some of the best fun I’ve had in this game is in getting lost, and encountering Gorilla cultists, hunting for water (Both the game’s currency and a necessity. Tip from one who found out the hard way: Don’t take traders for all their “money”, as they’ll die, and upset their friends. Some of whom are mutants with very big guns), and seeking strange new device plans, in equally strange locales (I really have to visit the ocean. I think I will, this run. Just for the hell of it.)

What I’ll admit I don’t enjoy so much is that some of the enemies are not entirely fair. I mentioned Slumberlings are nigh impossible to kill in the early game, but that won’t stop them spawning in the first caves you visit. Ruins are, in the early game, almost certainly deathtraps, with a much higher chance of encountering a still-active heavy weapon turret that ends your life than a much needed artefact. It’s not recommended for the easily frustrated, and it’s definitely not a beginner’s roguelike. But for the price they’re asking (£6.99), it’s definitely a good roguelike, with some interesting ideas. And there’s more on the way. 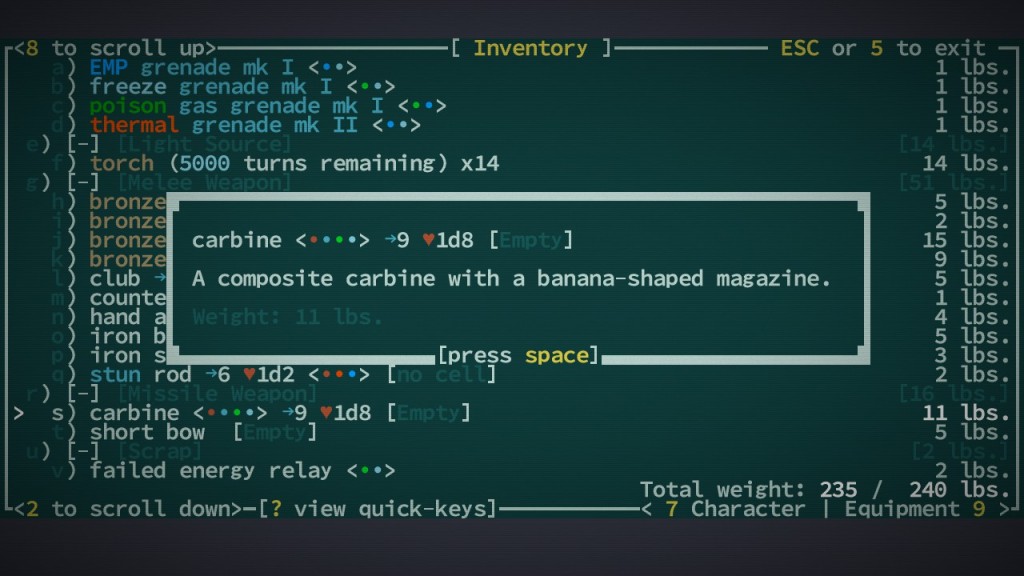 You may not understand if you’ve never played Roguelikes, but seeing this was both awesome and terrifying. I don’t *like* it when the RNG likes me. And, sure enough, I died shortly thereafter.

The Mad Welshman wanders the jungles of Qud, forever dying, forever going back in time. Sometimes he’s a mutant, sometimes he’s a True Human. One day, he shall find the mythical “dying of old age.”