White Wolf, purveyors of the World of Darkness (In which supernatural creatures of various kinds try to deal with their problems, including the need for secrecy) have… Very identifiable writing, at times. Style, they can do. Purple prose, they can do. The fantastic, they can often make believable, even relatable.

Subtlety, nuance, and focus, however, are often things that escape them. And these two pieces of Interactive Fiction very aptly demonstrate this. When one of your two showpieces is called (no joke) “We Eat Blood And All Our Friends Are Dead”, you know you’re in for a very White Wolf time. Whether you will enjoy that time very much depends on you. But I’m not betting on it. Let’s unpack why. 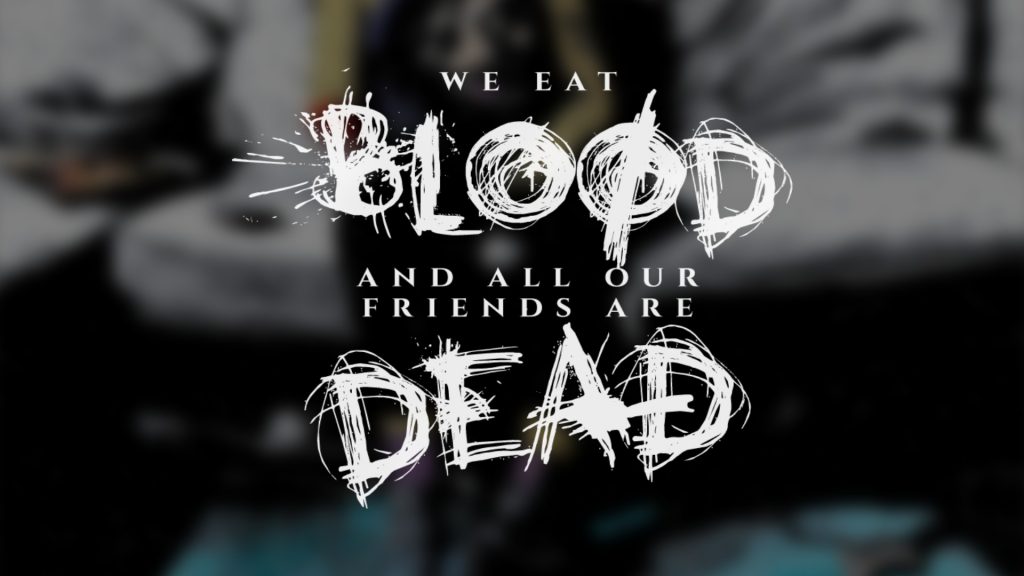 First up, let’s get the nice out of the way, because it’s all too brief. The mobile phone conceit of We Eat Blood is a nice one. Not one we haven’t seen before, but it works in the context, and allows for multiple threads. That’s good. Similarly, Refuge (The Mage portion of this twofer) has some cool visual stylings you’d associate with Mage (glitching, sigils, and the like.) So, visually, the stylings are pretty good. Similarly, for the most part, the tunes and sounds are also well presented.

So, there’s your style. Mostly. But the core of an Interactive Fiction is the writing, and its here… Where it starts to fall down. The general premise is that these are introductions, two people thrust into their respective supernatural worlds. But both quickly run into their own problems. Let’s begin with We Eat Blood, the stronger of the two. You are an artistic type, a drug user, general fun-haver, and, after a party, everything went horribly wrong. You can’t eat food anymore. You feel hungry as heck all the time. You have to learn how to deal with this. Oh, and your dead mother is also a vampire, a creepy one speaking in imagery, and there’s a racist bus driver, a lab monkey turned ghoulish killer, and… 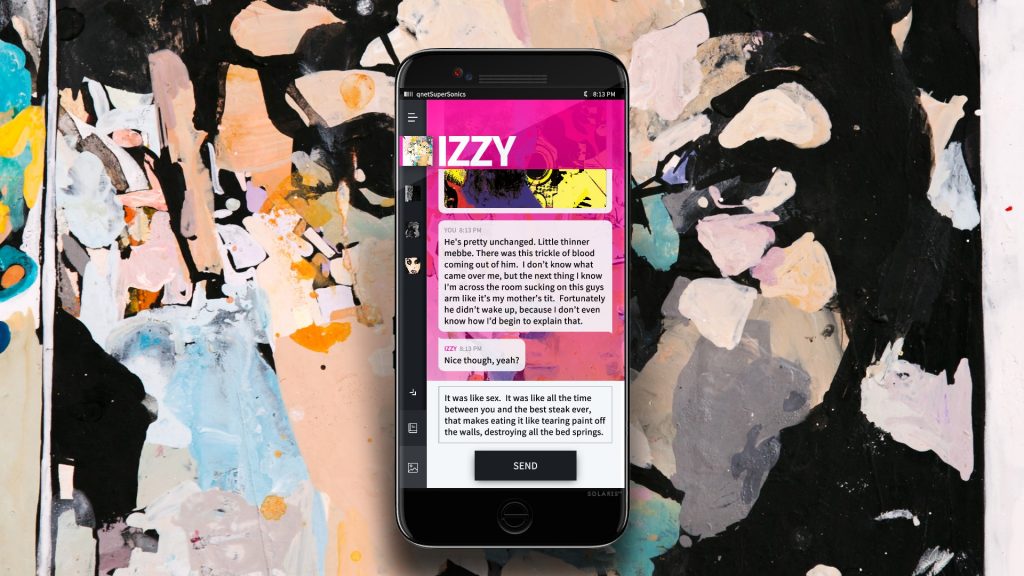 Hey, did you know that vampires were originally more zombie like, and sex had next to nothing to do with things? Well, now you do!

…It has a hard time keeping focus. There’s a lot going on in We Eat Blood, and it’s about as subtle as a bag of bricks wrapped around a smaller bag of bricks. The main character is an artist surrounded by artist friends because it allows really purple prose about how sexual bloodsucking is for a vampire, oh my god it’s so good, it’s like having communion with God, only that communion is also fucking, and… I didn’t actually mind that so much, having experienced my fair share of it when I enjoyed White Wolf RPGs (I still do, to some extent.) But the story is trying to build a world that’s meant to entice you into the World of Darkness without actually referring to things, so as to keep the mystery going, so if I didn’t know WoD, old or new, I wouldn’t have realised (possibly until the end) that I’m a Nosferatu, my mother’s a Malkavian… I could go on, but there are supernatural things, and Hunters (yes, with a capital H) and Ghouls, without explanation or context, and, rather than entice, it somewhat turned me off with how it seemed a collection of incidents without any real focus.

Now, I mentioned a racist bus driver, just off hand, and this is as good a segue as any into the Mage portion of the duo, Refuge. The name is, I’m assuming, a play on words on a couple of levels, as the main character is a woman called Julia, who lives in Malmo, Sweden, working for Nordic Aid with Syrian refugees. Her husband is a maker from San-Dieg- Oh. Wait. This would be a good time to mention this half of the duet I ragequit pretty early on. Because, like We Eat Blood, it’s highly unsubtle, and reading it felt like a highly painful clout to the head.

So… Minor digression here: Done well, games that discuss Issues (capital I, the big problems facing us today) are perfectly fine. Done badly, you have something very much like Refuge. Our heroine is a loving wife for a techbro who’s helping the girls into Maker culture, and is obviously the “good” , and the introduction of the “bad”… Is where I ragequit. 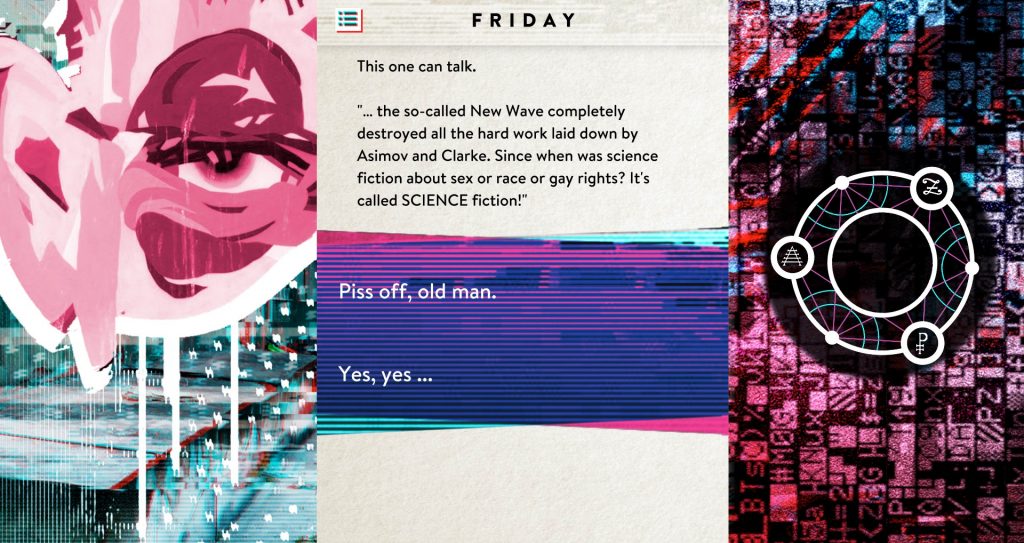 Yes, I get that this so-called “Professor” hasn’t actually *read* any Clarke or Asimov, if they’re saying dumb shit like this. Yes, I get that we are constrained by our “nice person” character to only be mean passively or actively. I GET IT.

Julia, I largely didn’t feel one way or the other about until this segment. She’s “generic nice person”, so generic, in fact, that it wasn’t until I looked at the store page that I realised she was a she (The first person narrative doesn’t help there.) But while yes, this guy is an asshole who, I would lay money, will be at the right-wing rally that apparently happens later in the game (Because this is a game about Issues as well as the introduction to the world of Mage), these responses are… Bad. And this so-called professor is quite obviously Bad, and the main character is so obviously Good, and I can almost hear the capital letters forming around this narrative. I could also hear poor ol’ Dr. A starting to revolve rapidly in his grave, but that’s purely by the by. When, before the bad things even happen, you find the reader yelling “I F*(!IN’ GET ITTTT!”, like Billy Connolly at an opera, it is a sign that you are handling things with all the subtlety of a Bagger trying to do microsurgery.

It may come as no surprise to learn that most of the story revolves around the Nordic Aid, magical elements kind of take a background to the whole thing for most of the narrative, and that the black-and-white presentation continues pretty much throughout. Oh, and for those of us waiting to hear if the Mage elements are as formulaic as they can be, yes, the character Awakens at a rave.

In summary, while We Eat Blood is unfocused in places, it is definitely the superior of the two games, but… Honestly, I can’t recommend either. They’re not terribly good at introducing you to the World of Darkness, or even their relative segments of it, there’s only the tiniest hints of subtlety in the writing at places, one character is only halfway relatable (We Eat Blood’s, who is still an asshole), while the other is a cookie cutter Nice Person, and, because of their primary conceit, you may not even realise there are multiple paths through the game (Seemingly mainly influenced by early choices), because of course the game isn’t going to tell you you’re a Nosferatu, or a Gangrel, or a Hollow One, or whatever the hell. And that, funnily enough, is sort of a problem. They become generic, rather than part of their world, one by trying to introduce too many elements, the other by sidelining the magical elements with a hamhanded handling of the refugeee crises in our world and the resurgence of nazi assholes calling themselves the “alternative right wing.” 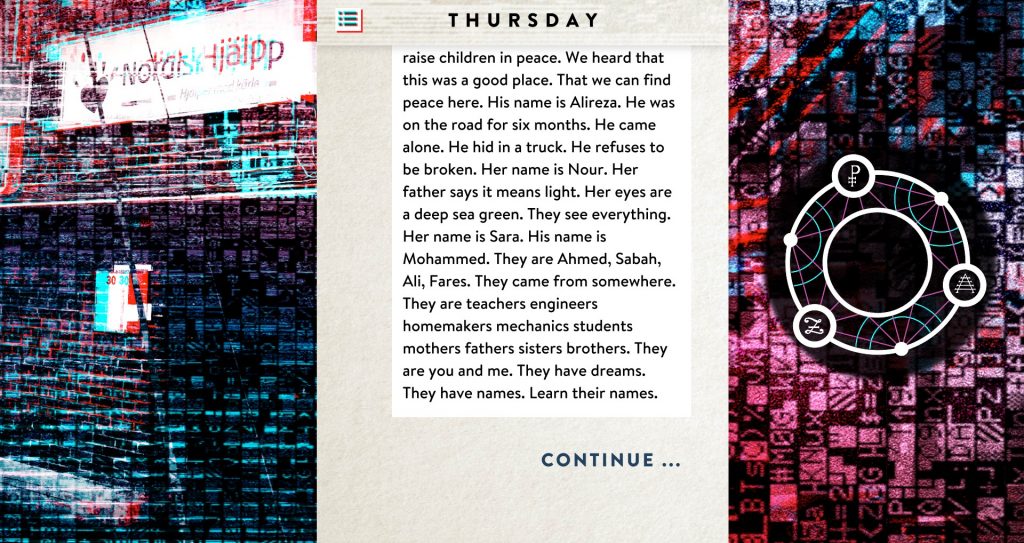 Hitting that “Compassion” button like there’s no tomorrow. I mean, it’s good advice… But there’s a page and a half of this. I’M TALKING ABOUT SUBTLETY AGAIN, IN CASE YOU HADN’T NOTICED.

The Mad Welshman remembers the names of all the supernatural beings who cross his path. There’s That Guy, and That Thing, and This Thing, and…