Source: Cashmoneys
Price: £5.99
Where To Get It: Steam, Official Page

It’s not often I get to review a game that’s so very honest about what it is: A hidden object/person search in the purest sense of the word, where the entire point is to click on things in the hope that yes, that’s the one you’re looking for. Or, y’know, get eyestrain trying to do it legitimately. That’s an option too.

Clicking on things, as it turns out, is the wiser option. As is discovering the scroll wheel does zoom in and out in many places. And that click and drag moves things. The game doesn’t outright tell you any of this, but you do discover it fairly quickly and organically, so I can’t really have a go at the developers for that. 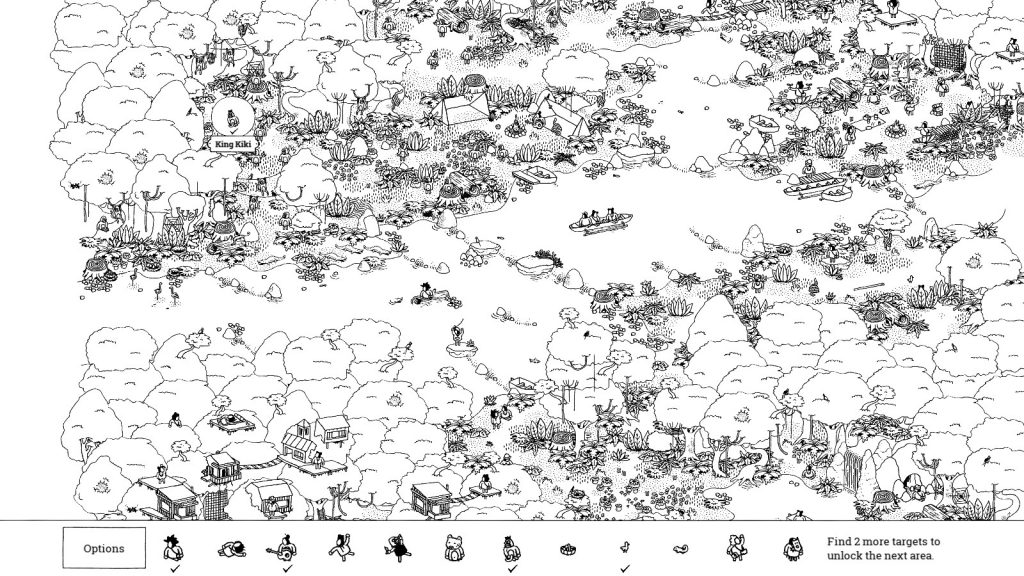 Goodness me, there’s a lot going on here, isn’t there?

In fact, there’s a lot going for what, at first, appears a simple and unassuming game, and a lot of that is because the developers have done their homework on both their source inspiration (Things like the Where’s Wally?/Waldo? books) and how a game… Can somewhat get around the limitations of their source.

Like the hidden person books from which they’ve drawn inspiration, there are stories in each image. The butterfly hunt. A day at the farm. A concert in the middle of the desert, which proved… Not to be the best idea. But interaction is required to fully spot everything you want (Although you can move forward before spotting everything, if you so desire, which is very nice.) Some people and objects are hidden behind leaves, or rocks that you drag, or, in one case, you have to appease the gods of the corn for your blessing to appear (Yes, I’m being cryptic. It’s not a long game, so I’m trying my damnedest not to give you any hints that the game isn’t.) Clicking on the objects to find in the bottom bar will give you a hint. Not always a very useful hint, but then, they weren’t always very useful in the Where’s Wally books either. And, of course, sometimes something is more apparent zoomed in, than zoomed out. 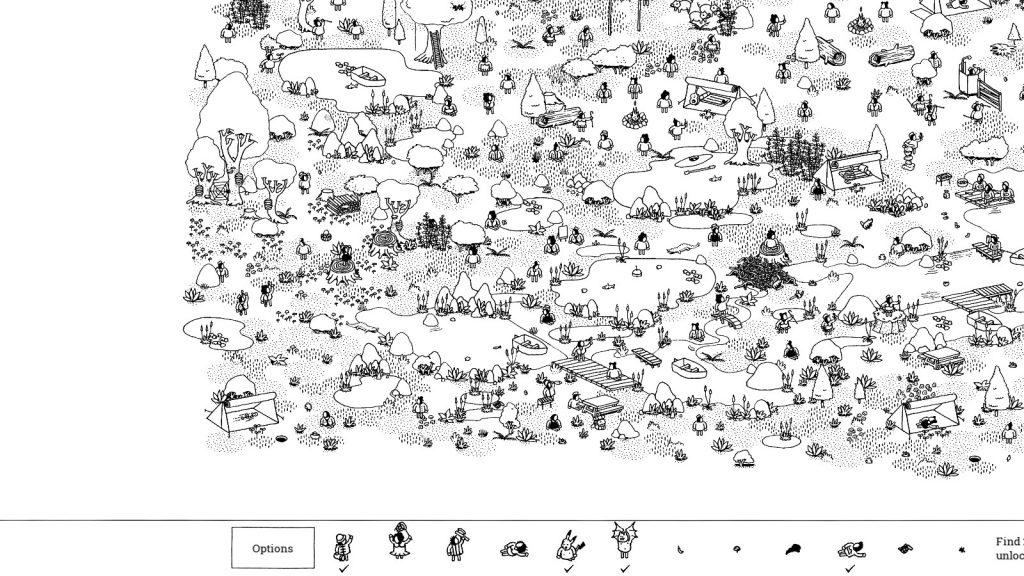 All these lovely… HEY, SHEPHERD! THAT’S NO PLACE TO TAKE A SHOWER!

Adding to this is the charm of the audio. Pretty much everything is done, soundwise, via foley, aka “Let’s try and imitate the noises with our mouths”, and I shamelessly love that. There’s a sense of playfulness about it as a result. Similarly, while the black and white line-art of the visuals may be a turn-off for some, it neatly sidesteps colourblindness issues that could be such a problem in hidden person books, and, again, it has charm.

Honestly, there’s only two things I would really criticise, and both of those are effectively niggles: The flavour text boxes for each level don’t run on a replay (You can delete your progress and replay), and the varieties of left mouse interaction aren’t very well explained (But become apparent with experimentation on the second level.)

For the price, one and a half times that of one of those pocket Where’s Wally books, I’d honestly recommend Hidden Folks to fans of this sort of thing, and for folks who want a relaxing, somewhat likeable game that involves just exploring the landscape.

The Mad Welshman grinned as he moved the train down the tracks. Ostensibly, he’d find one of those people he was hired to… But the hero tied up in front was definitely a bonus!