The sea is a harsh mistress. She is also, in Diluvion, a strangely empty one. Unless you count pirate ships, of which there are plenty. 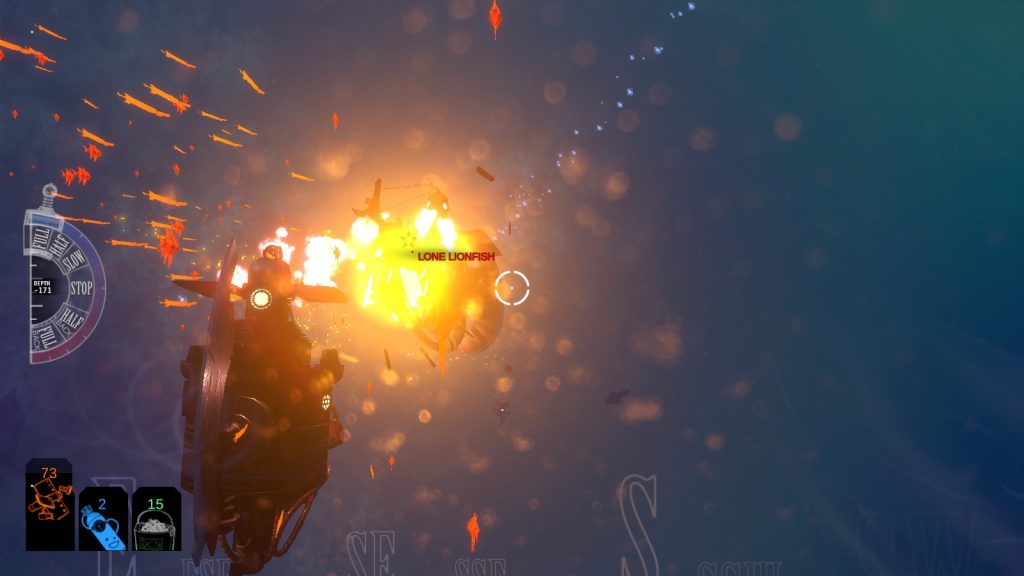 Thankfully, at this range, it’s almost impossible to miss. The day is mine!

Let’s step back a bit: Diluvion is a submarine adventurey simulation type thing, in which you pick one of three ships, eventually upgrading to better ones that can go deeper, picking up crew and having adventures as you go.

There’s just one problem: It’s not very intuitive, and it doesn’t feel all that rewarding. It is, without doubt, pretty. When you find an ice block, several times bigger than your sub, or an abandoned research station surrounded by mines, you can’t help but wonder at the stories. But, even with the landmarks, those stories are mostly one liners, and most of what you’ll be seeing, even if you work out how to efficiently use the faster currents to get around, is murky dankness, filled with the bacteria and dead flesh of the ocean, the marine snow. 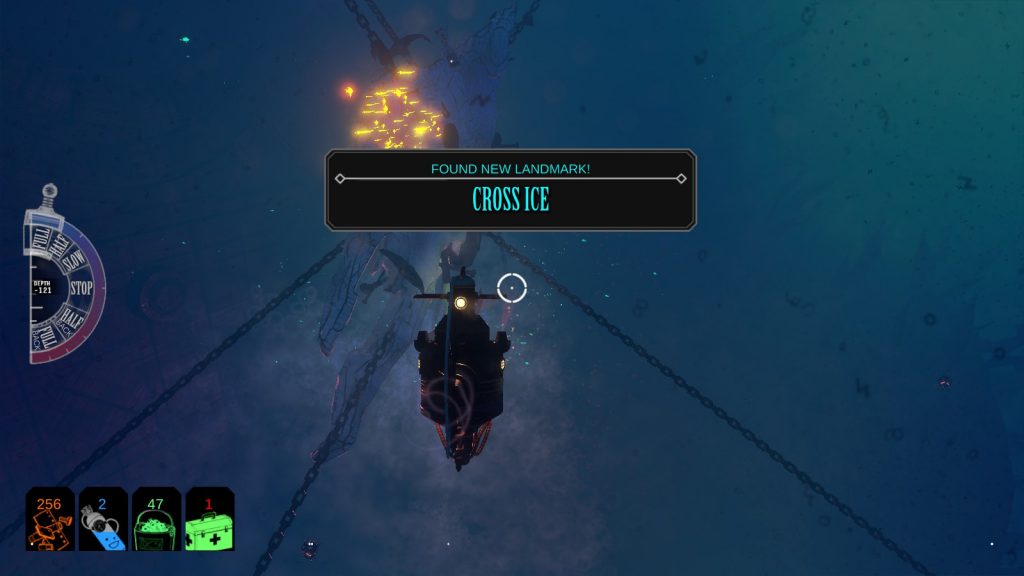 Not the shiniest landmark. But still an *impressive* landmark, considering…

The main thing that comes to mind with Diluvion is that yes, it’s a fairly open world, but it’s an open world without a whole lot to do. The first main quest (Upgrading the sub) is effectively an extended fetch quest, asking you to find scrap (Which is the easiest, being common, and ammunition for your main guns aside), reinforced plates (Seemingly only found in a minefield, because this is a post-apocalypse), engine parts (Seemingly, again, only found in certain areas), some blackberries (God knows how they’re grown, but I’ve also found Ferns and Daisies, so… Good job?), and a morse radio (Again, found… Somewhere. Somewhere I haven’t been yet.) Meanwhile, most of what this entails is docking with abandoned research stations, Loot Spheres (No, really, that’s what they’re called), pirate ships you’ve attacked, hunting around a hand drawn 2d representation of the thing you docked with for chests, and looting the buggers. Occasionally, there will be a crew member to hire (Including, weirdly, in the pirate ships you cripple with your scrap cannons), a trader, or an event hidden behind a door, itself gated by whether you have a crew member (Who you will potentially lose) and a crowbar (Which you will definitely lose, regardless.)

Again, these… Just blend into each other, to be honest, the majority not even being noticeable, let alone memorable. Crazed crewman to calm down was the most common one I saw, along with “There is a loot chest here, but it’s dangerous to get, maybe a crewman will help!” Meanwhile, Lady with Party Hat seems to get about a lot faster than I do, being seen in multiple places, at multiple times, sometimes even in the same building. Sometimes she’ll be running a bed and breakfast. Sometimes, she’s got absolutely nothing to say. Sometimes she’s a crafter of charms, which, due to the strange world, actually have an effect. But she is Lady with Party Hat, and unfortunately, you can tell me no different. 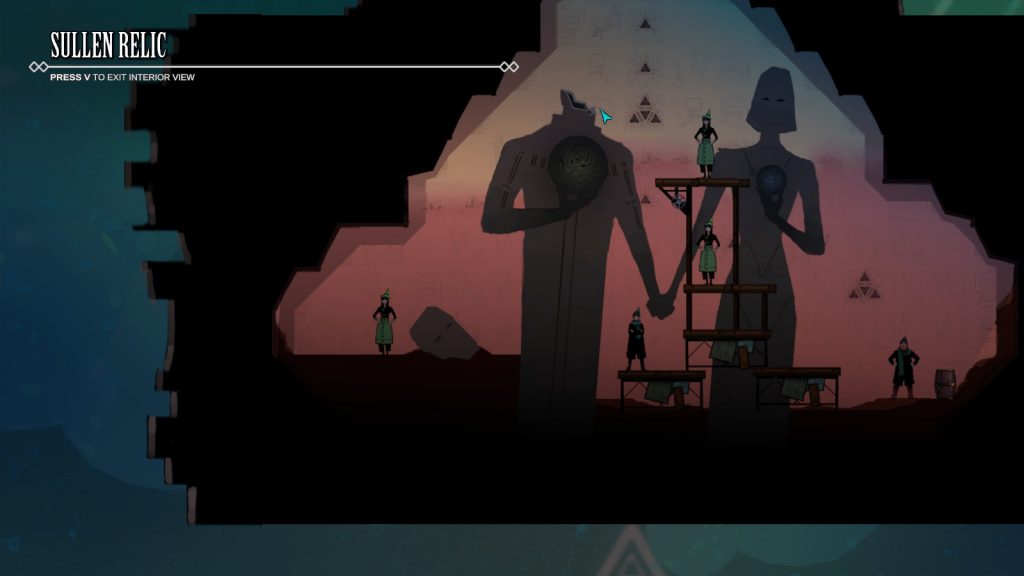 There is an over-arching story to this, by the way, something about a treasure, with everything unknown but its rough location (Very Deep Underwater), that apparently will make Everything Alright… But, for all that there are excellent ship designs, and the buildings are interesting, the sameness of a lot of the ones you encounter dulls the overall experience. It’s interesting, in its way, how a first quest can really mess up an experience. There are interesting things to find, and I’ve mentioned a few (Another would be the Angry Captain. Poor feller’s driven himself into an electricity pylon, and needs to make the cash to get towed), but despite seeing these things, I’m bored, and this big ol’ fetch quest is a big part of that.

It doesn’t help that, as mentioned, it’s somewhat unintuitive, and a little bugged to boot. When entering the settings, mouse sensitivity and the window size aren’t remembered between sittings (Occasionally causing swearing as Apply resizes beyond what I was comfortable with), the crew end up being pretty numbers, and applying them is odd, combat depends upon you remembering turret position, and just because something is a landmark, doesn’t always mean its a checkpoint. To be perfectly fair, dying is not a big problem, as you can reload from the last checkpoint just fine, but switching between 2d captain mode (For talking to crew, boarding ships, etc) and the main 3d mode is annoying at best, and, even with the addition of a slowdown function to switch crew between stations in combat, frustrating at worst. 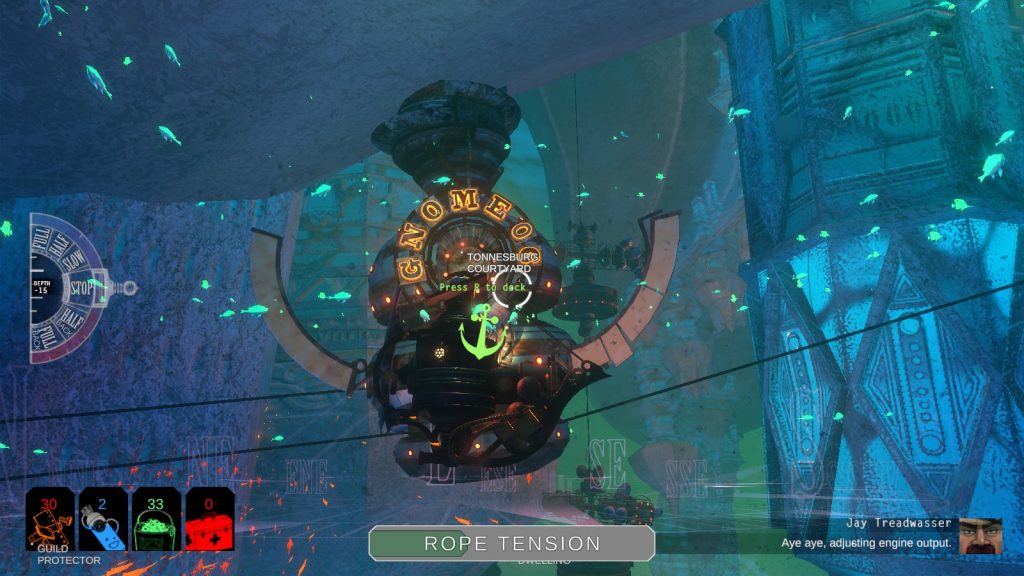 Tonnesburg is, so long as you look around, a surprisingly lovely place. You will be coming back here. A fair bit.

I can see Diluvion being perfectly fine if you go into it with the right mindset, aware of the grind and just wanting to chill out, spend some time. It does, as noted, definitely have its pretty side. There was obvious attention paid to the aesthetics, there’s obviously a world out there. But it’s not really for me. If you want a chill submarine time, then I don’t think you could go far wrong with Diluvion. But if you want something a little spicier, quicker, and a little less grindy, I definitely wouldn’t blame you.