I’d like a moment of silence for the crew of the ISS [Insert whichever one you chose here] . They pushed the boundaries of mankind, of science, but, in the end, they could not prevail against…

…And this is basically going to be the beginning to many a story of The Long Journey Home, which, in true science fiction traditions, begins with a jump drive going wrong, and being cast into an unfriendly, but definitely populated galaxy. One way or another, humanity is going to learn about the galactic community. 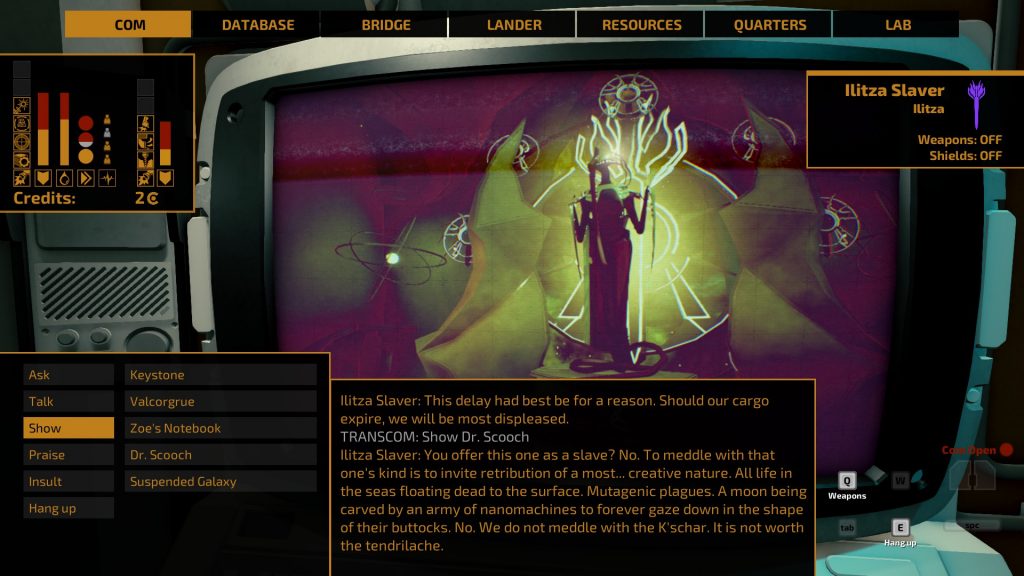 As it turns out, the Galactic Community doesn’t appreciate Galactic Pranksters. Not even the decadent bits.

In any case, the game is very simple in its controls, with most of the movement done with the mouse (Left click to thrust, Right click for retros when they’re available, and both for JUMP DRIVE. Be warned, hold it down until you’re actually gone), and some keyboard keys… Y’know, occasionally. Like tab to go into the ship interface, q to charge your weapons and shields or turn them off, and space to fire ’em off. So the game’s fairly accessible, with the caveat that, until (or, more likely, unless) you find or buy some upgrades, it’s very newtonian in its movement, fairly realistic, so everything steers like a god-damn barge. Nonetheless, the space elements themselves, once you get used to it, are just fine. Even space combat can be very interesting, if nail biting.

And then there’s the lander game. Hoo boy. This, folks, is your core method for getting resources, and often for exploring. You orbit a world, and if you see words like “Vulcanism: Severe”, “Temperature: Extreme”, “Gravity: High”, or “Convection: Moderate”, you sigh and prepare for your lander to get damaged. Or, y’know, go somewhere else, but you might also see the words “[That Resource you need right damn now]”, “Ruins”, or “Biotics”, all of which imply a chance for gain. Let’s lay out how this might go. On “Gravity: High” or above, you’re going to fall like a bat out of hell, and even with burning from the moment you’re allowed to, you might still slam into the planet. You’re going to be burning a lot of fuel just on staying afloat, and you’re going to need more to escape. Meanwhile, with “Convection: Moderate” , the winds will occasionally start blowing in one direction or another, and, unless you have something to lessen the pain, believe me, the winds are going to have their say more often than you will. “Temperature: Severe/Extreme” , meanwhile, means that, without good heat shields, you’re basically going to be taking damage for as long as you’re down there. In the case of a world with convection and high gravity, with gases to harvest and a ruin, the odds are high you’ll be wasting a lot of fuel trying to suck up those gases, as you have to be flying above a gas vent to get those sweet, sweet fuel chemicals. 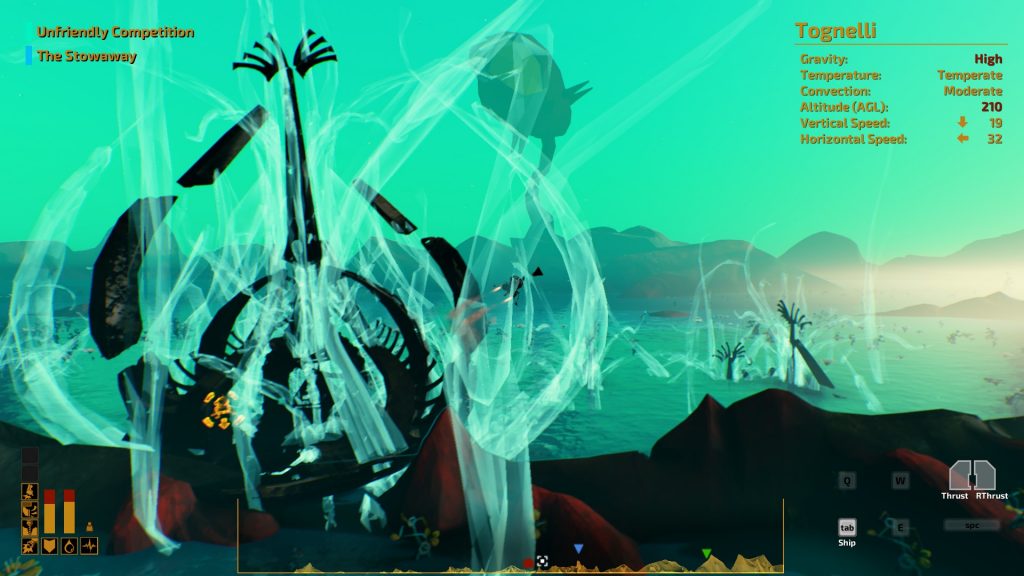 This isn’t to say worlds aren’t interesting a fair amount of the time. But not pictured was the two or three minutes wrestling with the wind so I could SODDING LAND.

You might have gathered that I don’t like the lander game much, and Explorer Mode (the easier mode introduced since the game released) only tones down a fair bit of it. Gas Giants remain trading fuel for damage. The dread “Sector full of Pulsar Systems” (High radiation damage periodically while you’re in the system) will still happen… Just less often. And the aliens will give you somewhat of a break, but certain races will still declare you their Ever-Mortal-Enemy for not doing certain jobs for them. Which leads us nicely on to what I feel the best part of the game is: The aliens.

There’s a fair few of them, from the hyper-feudal walking beards, the Meorcl, to the cheery, rugged gate explorers, the Reeve. The nigh lawless and decadent Ilitza, to the calm and lawful Logos… There’s a fair few, and each has their own character, wants, dislikes, and threats. One of my favourites, perhaps, was the Cueddhaest, who are both cheerily trying to explain their faith to my meatsack crew, while trying (badly) to disguise their revulsion at our fleshy, not-rocky forms. “They’re still taaaaaaalking, brother!” , I heard one disclaim, and his calmer, more open friend, over our equally more open comm channel, states in reply “Well, hopefully they’ll stop soon.”

Charming, friends. Real charming. In the end, it’s the aliens that draw me in, and the lander game that repels me. The worlds and events are somewhere in between, ranging from space mysteries, to things you are likely to screw up on and piss somebody off if you don’t have the right item, or the right gossip, or the right… something to deal with it. The game very much banks on you replaying the game to get through it well, maybe even get home with all the crew intact, and nobody having been truly pissed off (the best of all possible endings.) Am I okay with that?

Yeah, I’m okay with that. Not everybody will be though, so my own advice is to read, not just this review, but a fair few more, to get a better picture of the game before making a purchase. It’s certainly got its interesting points, but to play fuel conservatively is to play moderately slowly, carefully, and cautiously, and I know not everybody has that time. 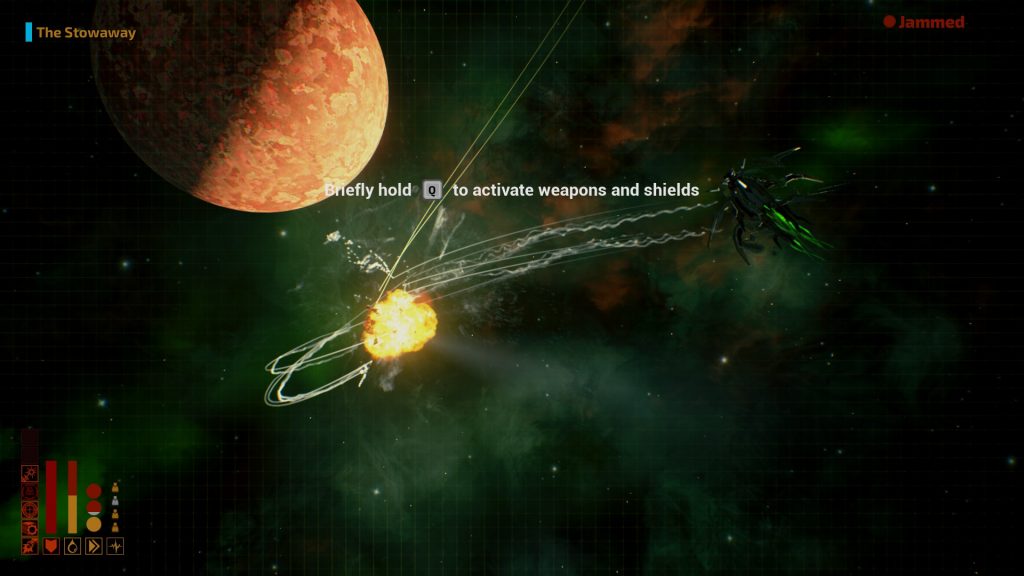 There is a very good reason not to get into space combat until you have better kit. Namely, that you’re crap at it.

The Mad Welshman was the main engineer behind the Jump drive. He still, to this day, blames those stupid shield engineers for what happened.