The Aquatic Adventure Of The Last Human (Review)

Source: Cashmoneys
Price: £6.99 , £10.99 for the deluxe edition, which includes the map they didn’t really put in the game.
Where To Get It: Steam, itch.io, Humble Store

I liked the Souls games. I loved Shadow of the Colossus. I like me some Metroidvanias (I 100%ed Symphony of the Night at least once, which was… A thing.) I don’t mind me exploration. But Aquatic Adventures of The Last Human feels, to me, like it didn’t really learn from them. It tried. Bless it, it tried. But I feel like core lessons weren’t learned. Let’s go into that. 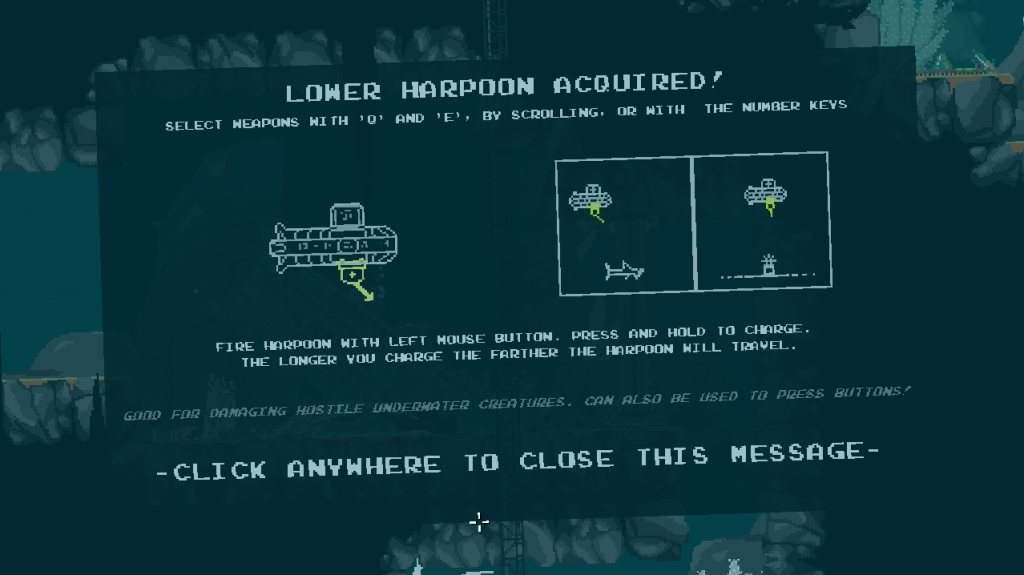 Where’s the Upper Harpoon, you say? Only once you find enough upgrades, cabrone!

First up, the first weapon. I found it, was led into a room that looked suspiciously like a boss arena, and lo… It was. This would all be well and good, if the first weapon wasn’t the thing it was. But the first weapon was a harpoon. That only fires from the bottom of your craft, because reasons. Not just that, but a really slow to charge harpoon. We’re talking a good three or so seconds between max charge shots. Which, as you might expect when the boss is an annelid around 100 times larger than your ship, about as useful as a wet fart in a diving suit. Let’s compare that for a second with, say, the Souls games and SotC, shall we?

In the souls games, similarly, you start with utter tat, and similarly, the bosses feel more like you’re giving them a tattoo than actually harming them, the first time through. But firstly, that changes rather rapidly, and secondly, no matter what you’re doing, you’re quite obviously giving it your all. There’s a sense of effort to connect with, a struggle for life, that shows in every grunting, snarling, huffing movement you make. Similarly, in Shadow of the Colossus, once you find a colossus, the fight does take ages, but you don’t mind because the entire struggle is visceral… You have to hold on for dear life, jump on something that could squash you like a bug with a mis-step, and when you do manage to do something? Oh my, the accomplishment! 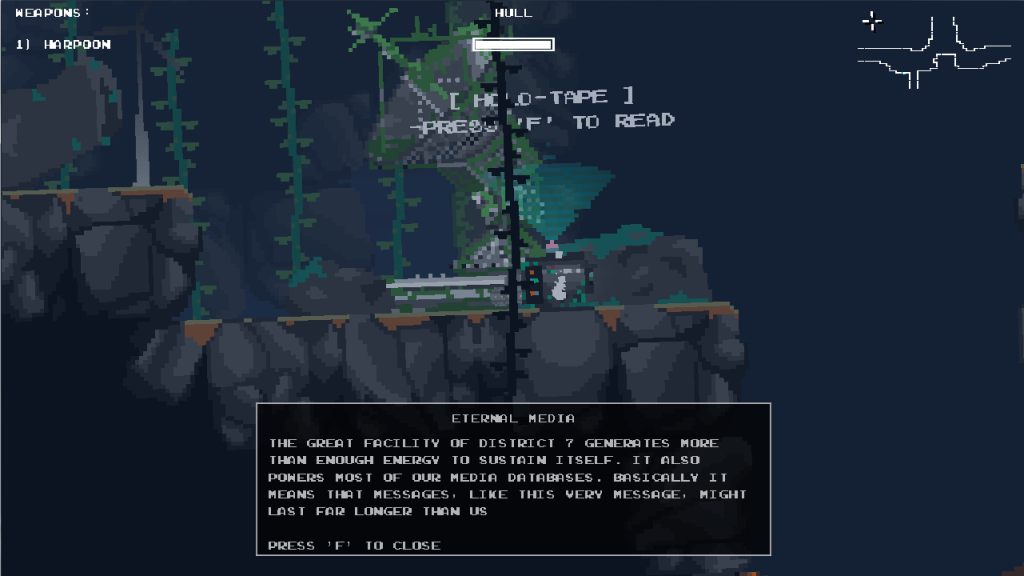 The story of humanity is apparently a struggle between Terrorist BluePeace, and an increasingly authoritaria- Wait, where are you going?

There is none of that in the early fights of Aquatic Adventures. What there is is “wokawokawOkAwOkAWOKAWOKAWOKAWOKA- CHUNK”, except for the times when certain attacks occur, when it becomes “brmbrmbrmbrmbrm ch-ch-ch-ch.” Those are the sounds, specifically, of charging up your harpoon to attack at its highest damage and range (piddling), and the sounds of avoiding projectiles of some sort while firing your harpoon at its weakest as quickly as you can (About twice a second, at an estimate.)

In other fights, in other worlds, other games, I at least feel something. But in the early fights of Aquatic Adventures, I feel, at best, like some brigadier calmly calling “Chap with the flukes, five rounds… Er… As rapidly as you can manage, private.” And then, occasionally, something will kill me that I didn’t even see coming. Because the other thing this game doesn’t do well is readability.

Make no mistake, it’s pretty. I appreciated how different strata of this underwater world feel different: From the top, which is relatively simple outposts, the last remnants of a now dead humanity, to Settlement Seven, media dominated, with generators and television screens that have somehow survived several millennia of saltwater corrosion (Somewhat optimistically), to Central, the dark, authoritarian part of our slow descent into extinction. But navigating these areas, and more, are somewhat of an annoyance, as many are dark, and all of them are somewhat hard to read. Similarly, the majority of underwater creatures (In the beginning at least) aren’t hostile, but I spent the first thirty minutes shooting inoffensive fish because… Well, I couldn’t be sure. As it turned out, the thing I didn’t even see coming was one of the second boss’ attacks. Which is a good point to mention the bosses. 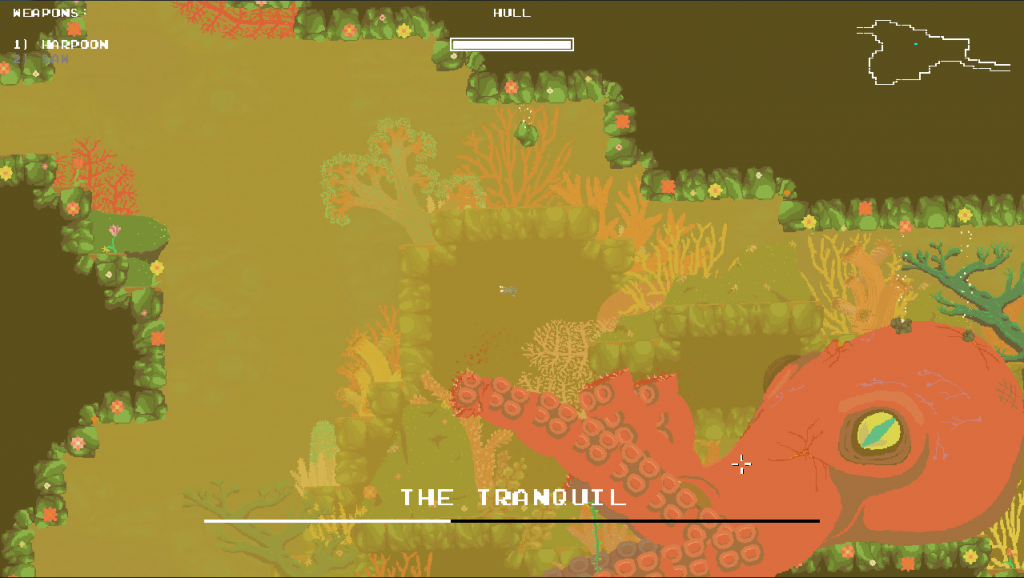 The Tranquil, about two minutes after it started annoying me…

I thought, after the first few fights, that it would become less tedious. It didn’t. Even with charge upgrades, and a saw to get me new areas, my choices of boss were a fish that constantly healed itself unless I destroyed, er… The bits of itself it was shooting out, then eating to heal; An octopus which required slowly weaking limbs, chopping them off… Aaand they came back completely for the second half. No, you don’t get a checkpoint, and no, at no point do you feel awesome for doing it. Mostly, you just get annoyed when a segment you thought you’d damaged enough wasn’t as damaged as you thought, or you got damaged despite having the saw, and that kills you, forcing you to do the whole tedious mess… All… Over… Again. Oh, and while it would be spoilers to mention where a certain useful utility power up would be, suffice to say, it’s in the very last place you would look.

This is the worst part. The music is good. The visual aesthetic (once you ignore what the nice gamma slider person says) is okay. But this is a game about the end of humanity (Apparently through several terminal cases of stupidity), and I… Don’t feel anything. When a boss kills me, the “You died” and restart to checkpoint just makes me sigh a little. When the messages from Blue Earth Alliance (Think Greenpeace, but definitely terrorists) turn up, I feel no reason to care. Everything I’ve come across in this game is emotionally detached, and strangely devoid of anything beyond surface detail that I can really get to grips with. That, at least, triggers an emotion or two: Sadness and feeling awkward. 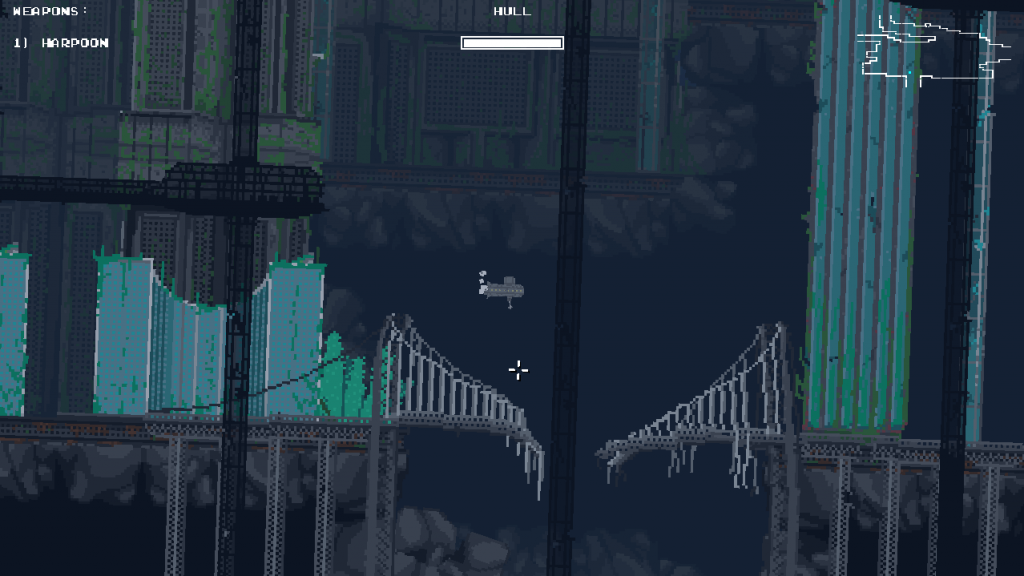 This used to be above water. Now, it’s simply a curiosity.