Source: Early Access Backer
Price: £14.99, £18.99 with soundtrack
Where To Get It: Steam, Humble Store, GoodOldGames 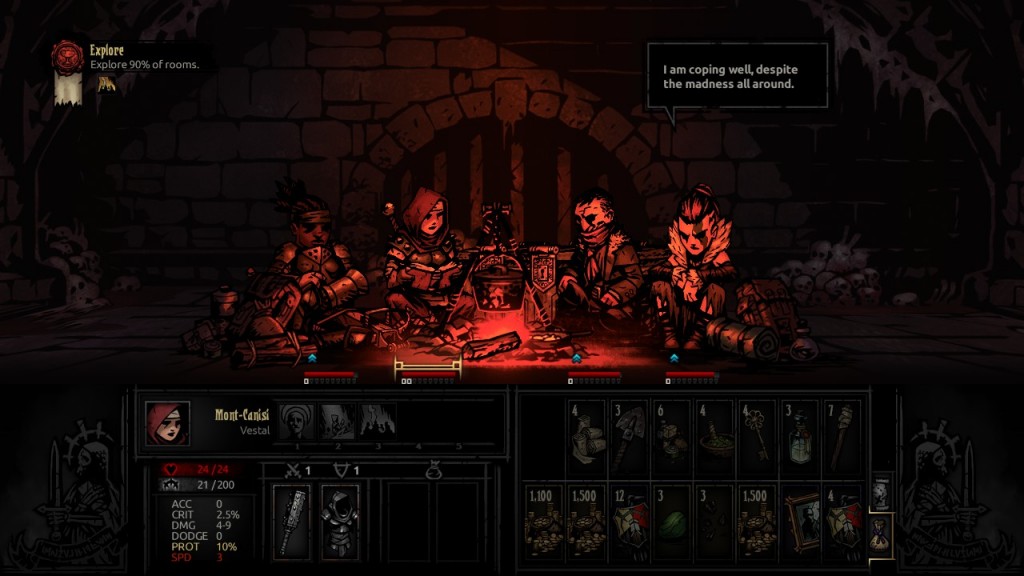 This… Is the essence of “IKR?” in Darkest Dungeon.

For those who haven’t seen me talk about Darkest Dungeon before, it’s a gothic Lovecraftian strategy RPG with procedurally generated elements, where you, the inheritor of the [Insert Doomed Family Lineage Here] mansion, must cleanse the dark taint of your now corrupted home with the aid of adventurers who are going to become diseased, raving, and dead in their droves as a result of your relative’s delving into Things Wot Man Was Not Meant To Know. But that’s fine, they’re assholes anyway. Good example, each game starts with Reynauld the Crusader, who is a God-Fearing Kleptomaniac, and Dismas the Highwayman, no longer allowed to gamble in any township he visits because he’s a widely known cheat. There’s some customisation allowed from the get-go, and random chance begins affecting you from the first dungeon, making no two playthroughs exactly the same (I’m playing from the beginning again right now, and, after finishing the tutorial, Reynauld got a -5% to his ranged skills, a much better result than last time, where he became a God-Fearing Kleptomaniac who wouldn’t pray… Making it impossible for me to let him regain sanity until I unlocked the Sanitarium, several forays later.) To make it extra amusing, there is an achievement for keeping these first two the whole way through. 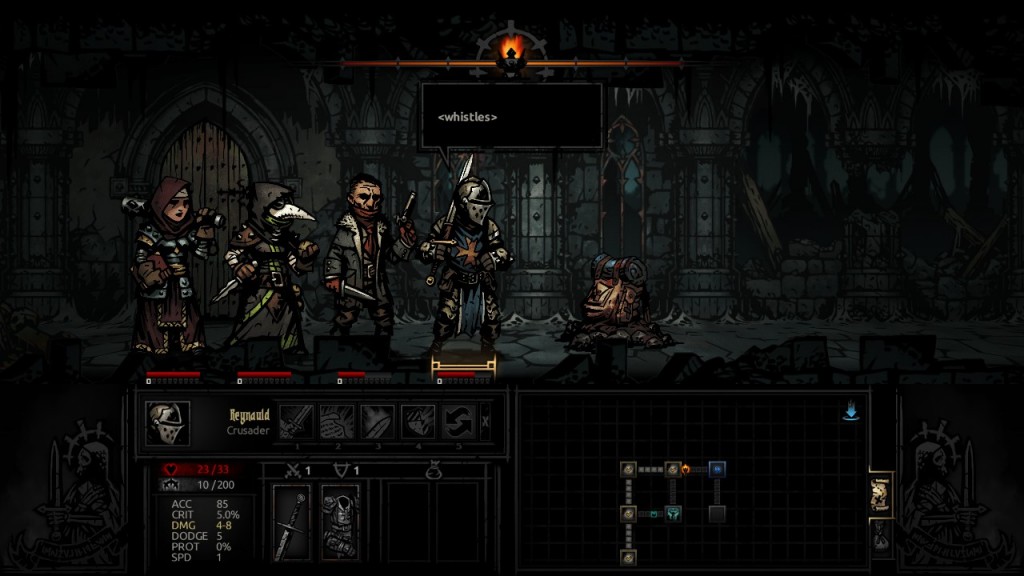 And this is where “I like it” and “I can’t really recommend it” start to conflict. Even in the early stages, Darkest Dungeon was not the friendliest of games, and as time has gone by, it’s only gotten more complex, more difficult… Which is awkward, because it started somewhat challenging, and has proceeded to “Even after you understand the game, you’ve still got a chance of losing enough folks and quests to set you well behind the game’s difficulty progression, leading to a slow, graceless fall into the realisation you have to restart.” But, equally, I can’t deny it’s one hell of a ride down, with the game oozing atmosphere from pretty much every pore. The funereal town music, the heavy inks of the visuals, leading to a grim, Mignola-esque feel to the visuals that… Well, is really praiseworthy, and the narrator… Ahhh, Wayne June as the narrator deserves great things, for making the defining character trait of “Dull Hopelessness” both an entertaining and emotionally affecting experience. You can feel the weight throughout the game, and so the narrative mixes well with the story (Which, hey, is about trying to complete a hopeless, madness inducing task!) 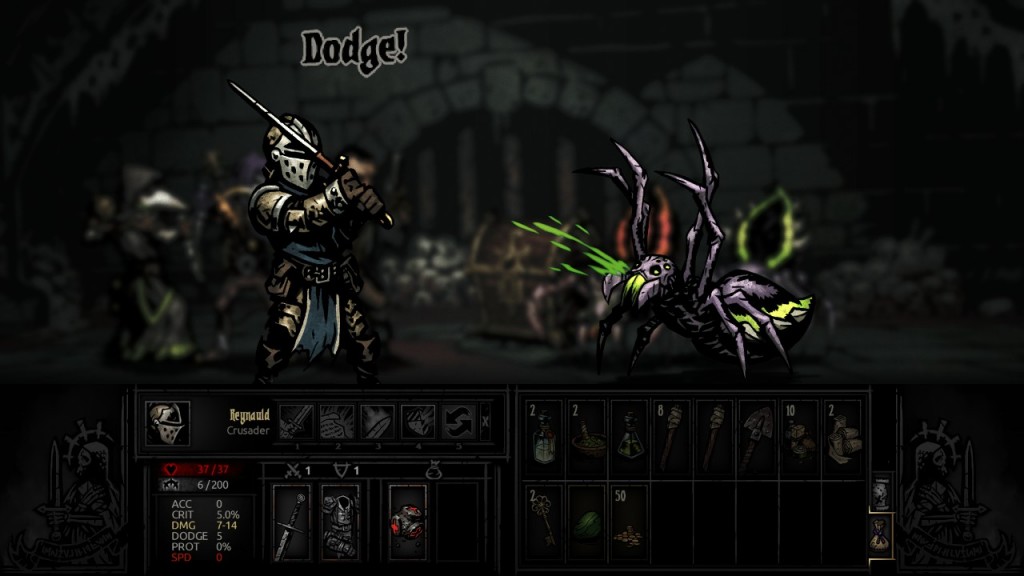 Oh… Yeah, arachnophobes might not want this game. Just sayin’ …

Unfortunately, that weight, that sense of grim restraint, also affects the game in its rules. Some characters do well in the light, some in the dark. Most classes do particularly well in only one or two positions out of the four adventurers who enter a dungeon, and being surprised can ruin pretty much any party’s perfomance. Some items in the dungeon can be neutralised or improved by using inventory items, and they’re often specific to the dungeon type (So locked chests, for example, require keys, which is obvious… But Iron Maidens can give treasure instead of tetanus with the use of medicinal herbs). Afflictions and Diseases change the character, and stress can, if you’re not careful, quite literally kill your characters… Which can definitely be gained more easily than lost. All the while, money is a problem, and the over cautious player must, paradoxically, take greater and greater risks to stay afloat, the larger the dungeons get. Meanwhile, recovery not only depends on those ever dwindling funds, but on whether the Caretaker, that sad, broken soul, isn’t currently trying to drown his woes in the particular brand of solace you specifically needed for one of your better adventurers. This, and much, much more, has to be remembered and kept in mind often if you really want to complete The Darkest Dungeon… Hence why I can’t really recommend it. 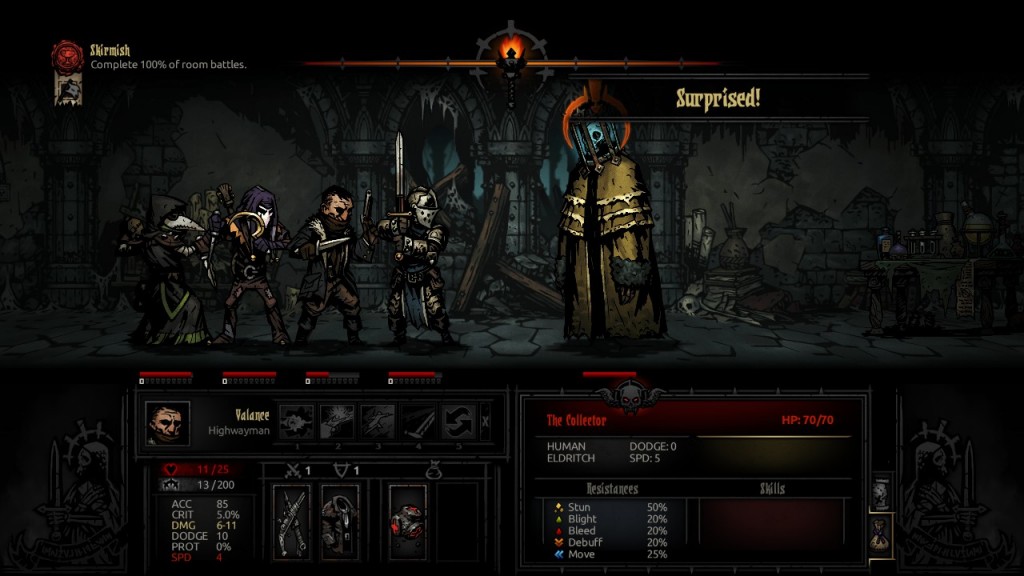 I will, however, say that sometimes, its worth it, to see a grand horror surprised by your ultimately futile resistance.

But hey, even though I can’t recommend folks buying and playing it because, in a very real sense, the game resists it with the sheer amount of things to keep track of that can screw you over with a moments’ inattention (Or lack of awareness), I’d still say to watch a few playthroughs and ask around, because the atmosphere, at the least, deserves to be experienced. Even if the game wants you to suffer when playing it.

The Mad Welshman is aptly named. He has seen things… Things behind the cackling facade we call reality. Entire worlds, between one quad and the next. And behind it all, the RNJesus, bubbling and fluting madly away, uncaring of humanity…