StarCrawlers, by Juggernaut Games, is the latest in a few games this year and last that’s exploring the ol’ step based RPG formula that we know and love, and… Honestly? I’ve never been more scared of those galactic punching bags, Space Pirates, even if… I don’t think that’s entirely intentional at this stage. More on that later on. 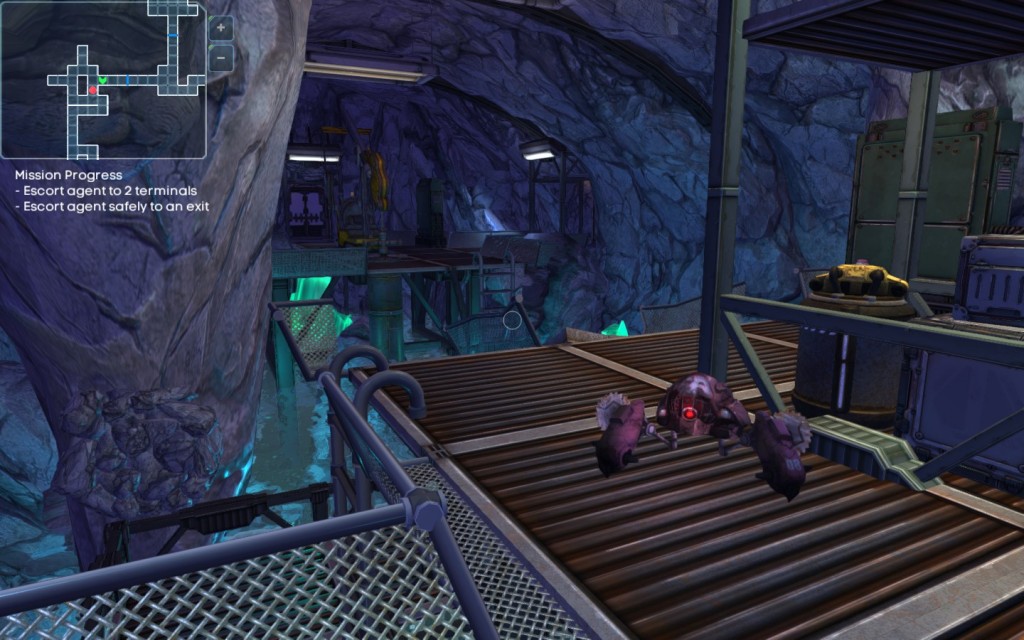 Encounter groups are visible in the main world, much like Might and Magic titles, although this won’t always tell you the whole story.

If you’ve played more recent step-based RPGs (So named because they involve taking single “steps”, rather than smooth first person movement) like Legend of Grimrock, and older step-based games like the Might and Magic series (A heavy inspiration), then you’ll know what to expect with StarCrawlers: You go into dungeons, occasionally solving simple puzzles, but mostly using your party to beat the stuffing out of various beasties and achieve their objectives with the power of TEAMWORK. The kind of teamwork that RPG heroes do, that is… Maximizing the amount of pain they can lay onto a group.

There seems to be more on the way, but the basic gameplay is already there: You kill things for XP (Although not as much as you’ll get for doing the job overall), and loot things in order to make your pretty numbers go up, and occasionally take on story missions that seem to hint at Shenanigans (Capitalised because these are Space Opera Villain Shenanigans, the kind that results in the death of worlds, rather than banana custard over somebody’s face), and allow you to pick your side between various players in a sci-fi universe (From the UFP, Corporate Overlords, to people like the Workers’ Collective, essentially one of the few unions left around in the far future, it seems.) In between said story missions, you’ll do procedurally generated dungeons, with the puzzles and encounters being based on the tileset and objective. Mines, for example, have Radiant Ore, which, as far as I’m aware, only an Engineer can deal with, while Corporate Offices are the Hackers’ main playground. Similarly, protecting a scientist means exactly that, with no sweet reward if he dies before you leave, while one of the few mission types that doesn’t involve pissing someone off involves doing them a favour while fighting off animal or robot type enemies. 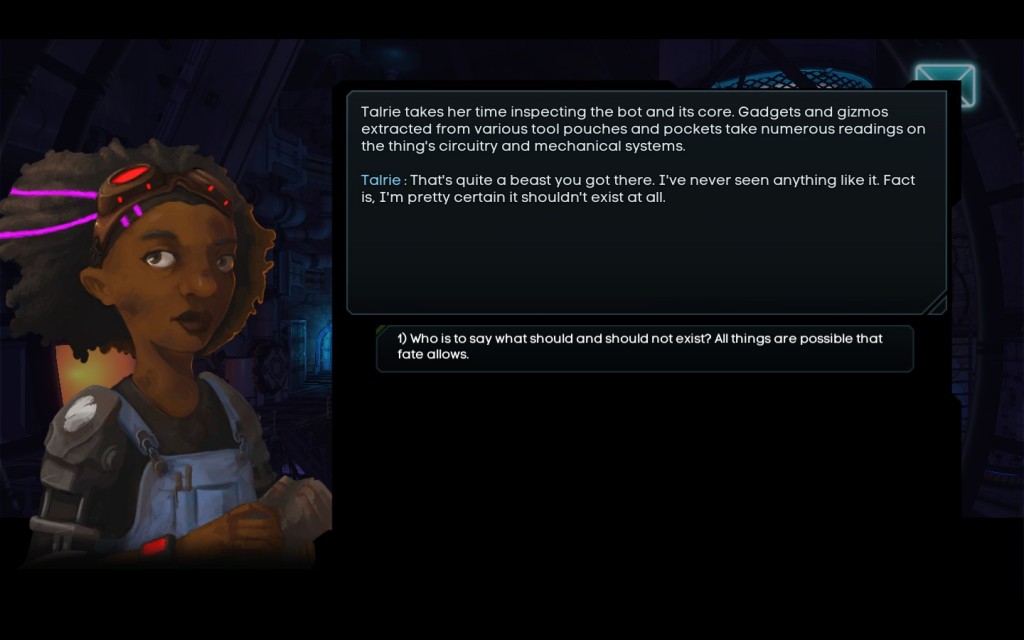 An example of the Void Psyker’s personality, and the character art (Which is also good)

There’s quite a cast of characters, too, with eight being playable off the bat, and at least one unlockable through the first story mission, each with their own uses, quirks, and mechanics. The Prototype (A stupidly advanced killer robot with some programming issues, and the aforementioned unlockable), for example, is all about massive damage, but with the caveat that if you use their powers too much, they’ll malfunction, and odd things will happen, eventually leading to them being out of the fight. So far, of course, this is reading more like a feature list than a critical review, but it’s important to get across how complex the game is under the hood, before examining how accessible it is, and whether that complexity is good or bad.

Funnily enough, it’s fairly easy to get into, as the first few story missions are balanced around a single character, two at most, and it’s entirely possible to either get three out of the nine or so characters in your party (Four can be taken on any one mission), or two well kitted ones by the time you hit the Aurora Starliner (The third story mission, and the one where the game’s story starts kicking off.) There are also multiple saves, skill respecs (There aren’t, currently, enough skill points to achieve all of more than a single tree, out of three per character), and each character’s role is well explained, even if their quirks may take a little getting used to. Also helping is that characters are not, strictly speaking, gendered (Male or female is fine), although their characters seem firmly fixed at the present time (And are likely to remain so): The Void Psyker is a bit monkeycheese, because it turns out messing with the dark between the stars messes with your perception of reality, the Smuggler is morally grey, the Prototype is torn between being violent braggart and friendly, poetry creating nice person…

…The writing, as a result, is okay. It’s not going to win any awards, except perhaps Good Use of Archetypes/Stereotypes. But the combat is accessible, the tilesets are pretty nice, with some variation between them (Grimy starship, Nice starship, and various Plot Starships, as one example of the subsets), and their own little quirks (Including, in some missions, faction loot, which, if you take it, will worsen your relationship with… Very possibly the very person who hired you.) So far, it’s seeming like it’s well worth the money if you like step-based RPGs, with some cool stuff. And yet, as I often say, no game is perfect, and definitely no game that’s still in development. So what do you have to watch out for right now if you buy it while it’s still being made? 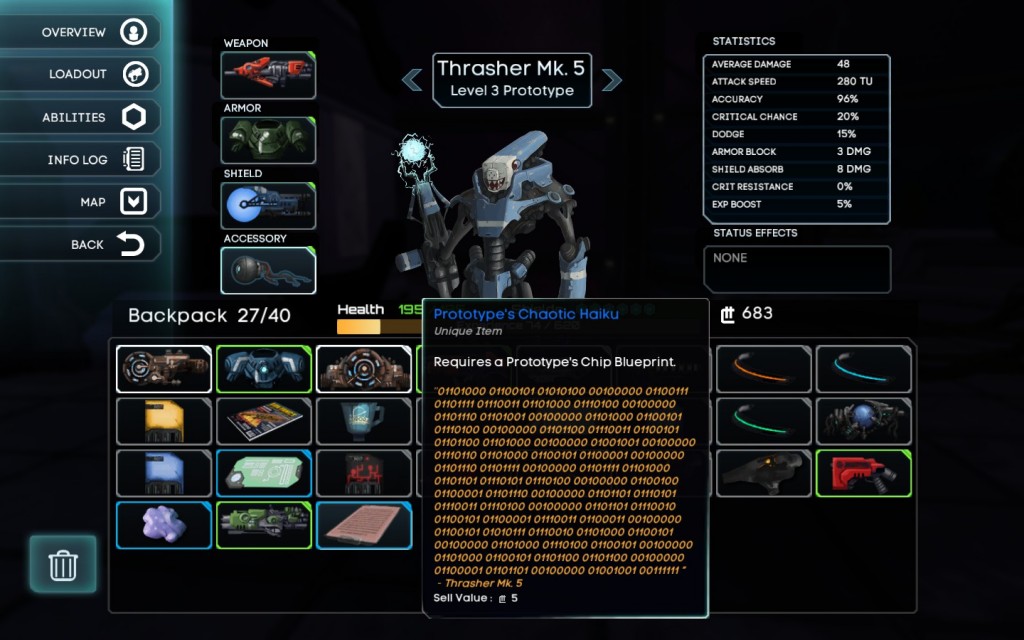 Some characters even have loot you gain for exploring their mechanics. Malfunction a lot? have a haiku!

Balance. As I’ve mentioned, this is a complex game under the hood, and while it tutorialises quite well, new things get introduced, and then have to be fine tuned. A good example of this would be the aforementioned Space Pirates. Yes, I did get there.

I don’t take Space Pirate missions anymore. At least, not until they’ve been through the balance grinder… Because that “Normal: For Level 3” or the like? It Lies. Space Pirates come in groups of 1… to 5. And there’s rarely just one group. They have pretty average hit points for humans, and pretty average damage for humans… But they’re the only human group right now that I know of, that can start with a full group… Nearly everything else is monsters or some variety of robot, mostly individually weaker than the party. Space Pirates, on the other hand, are only “below par” because they don’t have the wide ability grouping that the party does… And this actually makes them more dangerous. They take time to whittle down, and all that time, the only thing they’re going to be doing is a constant stream of damage, damage that, of course, whittles you down. As I mentioned… There’s rarely one group, and nearly all of my sadquits (I can’t really call them ragequits, because I wasn’t angry, just resigned) have been through either missions involving them, or missions involving Corporate Officers (Who have at least twice the normal human HP, and can summon other monsters.)

The latter set of encounters, by the way, was my fault. This game already has the beginnings of a faction system, and, as it turns out, pissing off Chimera Biopharm (Think the Umbrella Corporation) was a bad idea. Because the very next mission after I’d hit the “Okay, we want you dead now” threshold (Something like -60 Reputation), I’d decided to raid Chimera… And they welcomed me with a series of encounters that rapidly picked my party apart, even turning up in some missions only slightly related to them because… Well, they really wanted me dead! 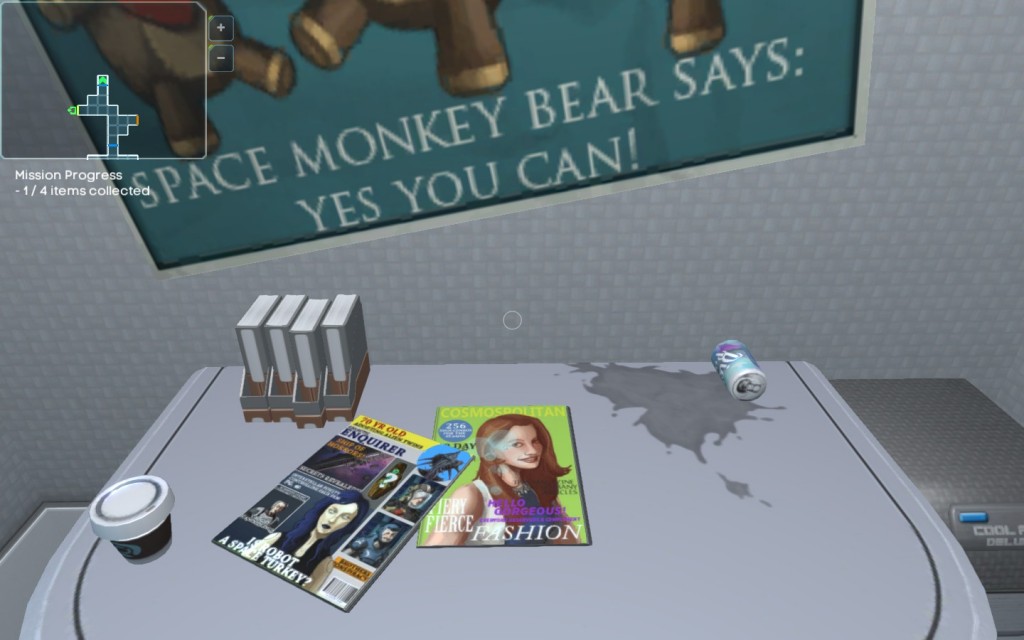 Sometimes, there are interesting and… Odd bits of furniture. This was in a Corporate Office.

So, right now, StarCrawlers is in a place that interests me critically, but I’ll freely admit isn’t for everybody: The midgame so far (About Level 5) currently feels a little grindy, and is about where the missions started blending into one another for me (Mainly because I had to do more of them to get to those aforementioned Story Missions), and I’ll happily admit that I have yet to get to the current “endgame”, the full levelling of my characters, because sooner or later, I run into one of those balancing issues, and it kills my interest in that save.

Do I think the game has promise? Yes, it’s pretty damn clear that Juggernaut knows their RPGs, and knows how to put them together. They’ve shown, over previous updates, that they do know they have to balance things, and I’m as confident as I can be that they can get that mix right. Similarly, a lot of effort has gone into both accessibility and environment, and even the placeholder designs for newer enemies such as Security Turrets shows that mix of wanting to give an impression of the final design, while concentrating on how they work. Do I think it’s worth a gamble of £15? Yes. But the usual Early Access caveat applies: Be Aware It’s Still In Development. It may only start to seem obvious after your twentieth or so mission, which hints at why I feel this game has promise, but it will happen.

In the meantime, I’m going to keep plugging away until release. The game definitely seems worth that. 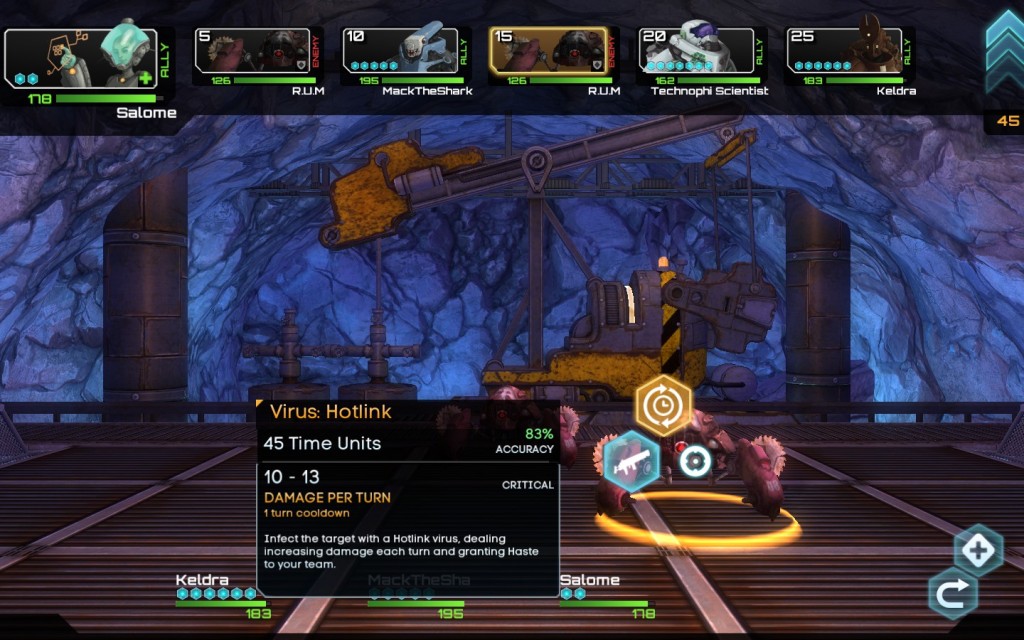 This is a screen you’ll see a lot of. It’s actually quite friendly, and intuitive.

The Mad Welshman drew the powers of the Dark to him, and giggled. He had such sights to show!