Enter the Gungeon is, at its core, entertaining. But it is definitely not the kind of entertaining that suits everybody. I’ll try to unpack that as we go along, but essentially, it’s a procedurally generated twin stick shooter set in… The Gungeon, home of more ammunition and projectile weapon puns than you can shake a boomstick at, along with a gun that can kill… The past. CUE OMINOUS MUSIC! 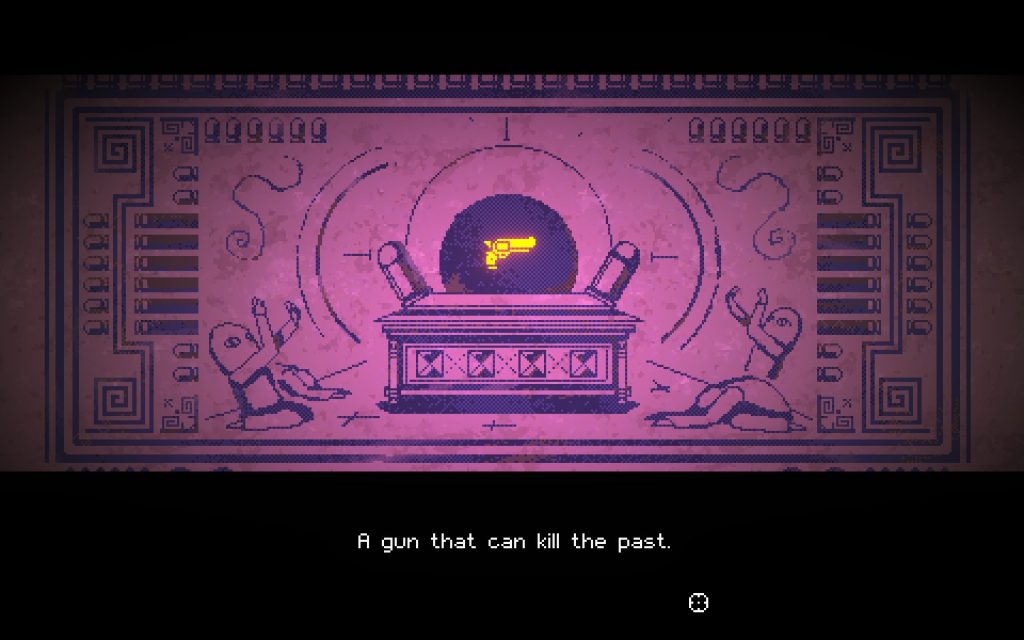 See? It’s got a parchment drawing and everything, it’s obviously both important and super cursed!

The game itself is pretty responsive, and, much like other procedural twin-sticks like Binding of Isaac or Nuclear Throne, I almost never feel like dying is anything but a failure on my part, as there’s quite a few tools to deal with the swarm of bullets that will head your way, including that most important one, the dodge roll with generous invincibility frames, and the limited “Blanks”, which destroy all visible bullets, and slightly knock back enemies. There’s a variety of guns, a variety of enemies, and a number of secrets and unlocks that were enough to stump the collective player base for all of a week or two (Which doesn’t sound like much, until you look at the guides, and realise how much was there to be discovered. So, er, go you, fellow players of Enter the Gungeon!)

However, the game likes keeping its secrets perhaps a little too much. I thankfully know what most of the items do as I get them, although rarely before I’ve used them for the first time, but the guns? I have no idea if a Wind-Up Gun (Which gets weaker the further into the clip it goes, as its spring firing mechanism winds down, presumably) is better or worse than the Barrel of Fish (Shoots fish, and an associated small puddle. Oh, and it sometimes stuns enemies), or the trusty RPG (Which… Well, blows things up but good, and is slow to fire and load.) 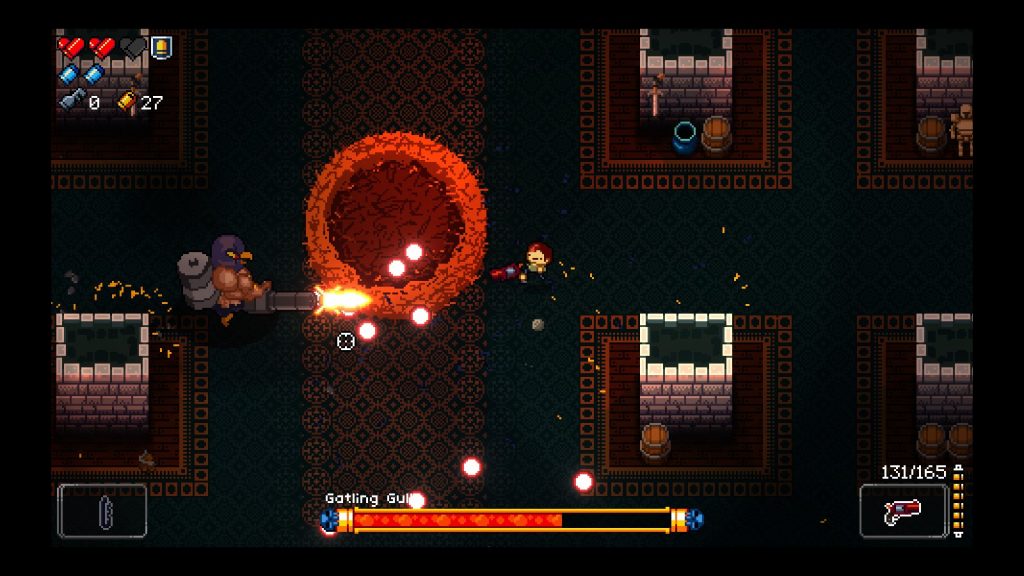 The Gatling Gull: Buff and violent. It killed a pig once, although it was aiming for a Gungeoneer.

I get it, really I do. It’s like potions and weapons in a “proper” Roguelike (Quote marks fully intended), where you don’t know what a thing will do until you try it or somehow identify it, but I’m specifically mentioning the guns because I know that’s going to be a turn off for some, and I’d rather they knew now than getting all ranty later. Similarly, the difficulty in levels can also be somewhat erratic, to the point where I dread the mention of certain bosses, such as the Beholster (Has quite a few potential attacks), or the Gatling Gull in a completely open arena (Where I know most of the fight is going to be dodge rolling rather than shooting), while simply shrugging at others, such as The Bullet King, whose patterns are pretty easy to pin down. Enemies, also, are somewhat inconsistent, as a room full of bullet bats is a case of “Er, is this threatening?”, while Lead Maidens and the setup of a certain possible level 1 encounter (Screenshotted below) makes me break out in a cold sweat.

Basically, I’m saying it likes its mystery a bit much, and I think the difficulty “curve” is a bit… Inconsistent. 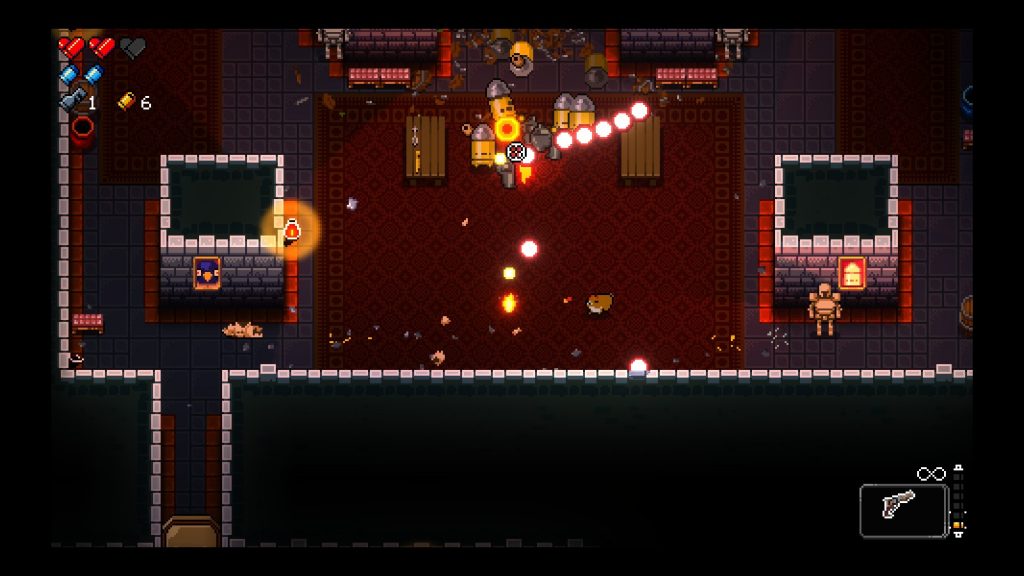 By no means the most difficult encounter in the game. Not even close.

Otherwise, the music isn’t bad, the sound effects are varied and, in some cases, suitably meaty, the visuals are consistent and well put together, so the main thing I’d really have to say about Enter the Gungeon is that your mileage will vary a little, but will vary a lot more if you don’t like mystery about those things wot you’re firing other things from. I’m not really going to comment on the story, firstly because I have yet to complete a loop of the Gungeon, and secondly because… Well, you’re not really encountering all too much of it except towards the end. Overall, Enter the Gungeon is definitely a case of “Your Mileage May Vary.”

The Mad Welshman rolled behind a table. Someone was trying to kill him, and they were bullet shaped… THINK, DAMMIT, THINK… Do I know this casing?