Well, hot damn. Not only has it been a previous interwubs incarnation that I last reviewed Starbound, it’s changed. And I mean “From the last stable update” changed. So well done, Chucklefish, for keepin’ such changes as “The plot is now there, and somewhat important” and “Oh my sodden underthings, I don’t have to tramp halfway across the system to see a bloody Stargate?” 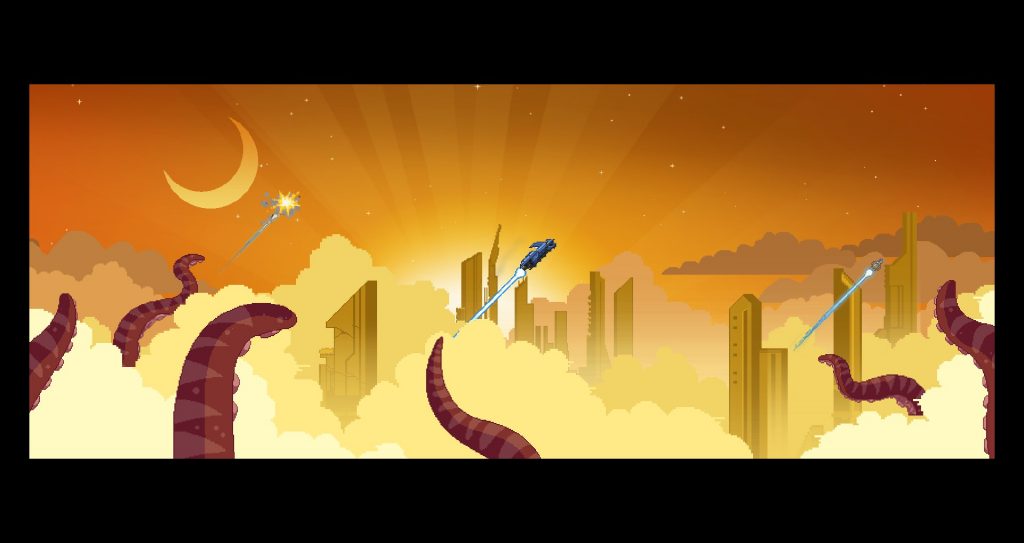 TENTACLES DESTROY EARTH: In other news, look at this cute space puppy!

I already kinda liked Starbound, and came back to it at various points during Early Access, from the early “UGH, CAVEMAN TIER” whiny days, to the days when you vaguely had things to do and all the biomes were in, to when quests happened and bosses made a vague sort of sense… To this. It’s been a three year journey, let’s check out how things have gone with a brand spanking new character, the lady Hylotl Hachiro (Yes, it’s a boy’s name, shut up and stop judging, asshole! Hachiro does what she wants, and she’ll science you if you disagree!)

Hachiro started her in-game life on a high note… Graduating from Protectorate University, to be part of the peacekeepers of a shiny age of intergalactic harmony. Which is then immediately screwed up by tentacles that destroy Earth. Go figure. Hachiro manages to escape, but finds herself on a lost world, with a pet to feed, herself to feed, and a StarGate Teleporter of some kind right where she lands. She then moved into a ruin nearby, set up her various crafting tables, a campfire, and (eventually) a bed, dug down to the core before she even had iron armour, and did two obstacle courses. Now she can dash and double jump. 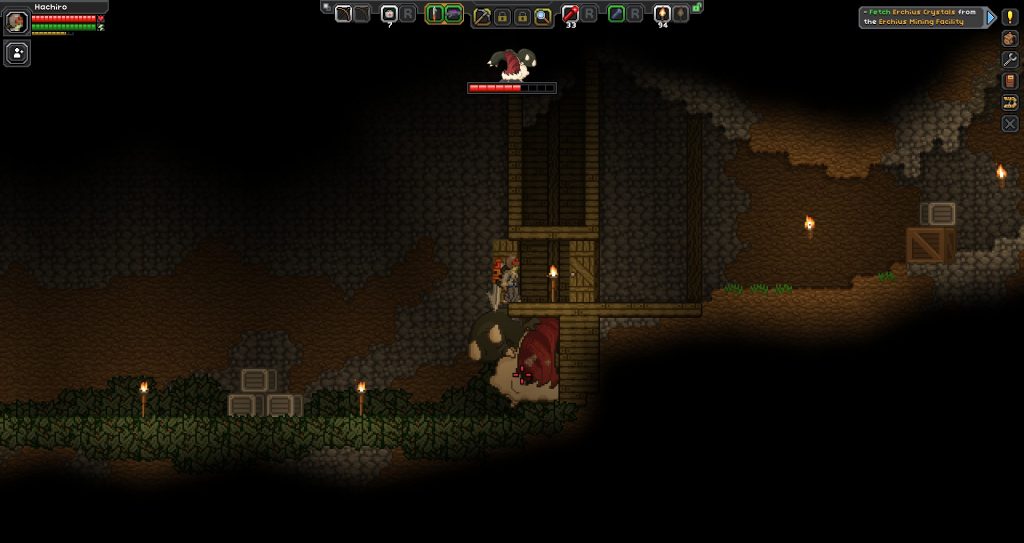 Oooh, that’s a big momma, alright! Thankfully, I have a gun, and patience. It has neither.

Compare this to the previous update’s “Bobbert”, the Glitch, who escaped without any prologue, dug down to the core after many travails, upgrading to Iron armour so he could fix his engines so he could schlep to the edge of the system to get a quest. Which he needed the iron armour for. As you can see, we’re off to an improved start. But, as the update giveth, it also taketh away. Unlike Bobbert, Hachiro has yet to give an assassin a cake, can’t cook proper food yet, needs more and different things for even iron armour and weapons, and Survival mode now means “You drop most of your inventory when you die.”

Which is definitely a reason to play cautious. For example, places I have dropped all my shit:

So, I like the changes. I like the story. I love the friendly tooltips. But I’m probably not playing Survival again unless it’s with friends. I just get too frustrated at losing most of my stuff, and dying several times as I trek halfway across a planet to find it. Also of note is that the mod scene, having developed over the three or so years of development, is alive and well, so the experience can be heftily customised via the Steam workshop. The soundtrack is great, the visuals are finely honed (I have little to no colourblindness problems here, always a good sign!), and…

Basically, there’s a heckuva lot of game here, a little grindy in places (As survival exploration games can be), but it’s got charm, it’s got story, it’s got a lot of cool things, and I would recommend it quite highly.

Of course, since it’s been in Early Access for most of its development cycle, I have the strong suspicion most of the people reading this already know that. But it’s nice to see a game come out of Early Access this strong.

…And then the bat behind him knocked him into the lava.