We’ve all seen games where there is “optional content that adds to the story.” Similarly, there are games where playing again introduces new things. But there are times when the execution of these features can harm perception of a game. For this mini-essay, I’m going to be picking on two games: Arkham Knight, and Zero Time Dilemma. In both cases, I’m going to be presenting a before and after seeing this. On the Arkham Knight front, we’re dealing with “optional content” , and for Zero Time Dilemma, it’s a second playthrough thing. Let’s start with that.

Omigod, how annoyed I was when Delta got revealed. “It was me all along, the pretend deaf, blind man in a wheelchair I don’t need, who’s been watching you and controlling your every move! All for the best of motives, of course, and all this pain and suffering you’ve personally experienced? Means jack shit because I, personally, didn’t do anything. It was all those other Deltas in other timelines!” 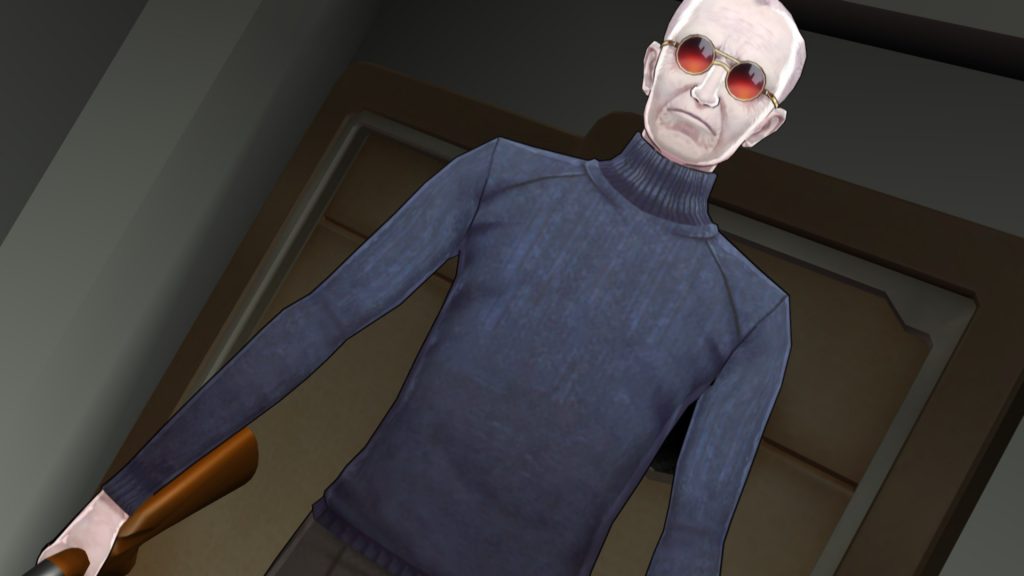 This man lies at the root of both the story… And the problems.

I was all ready for a rant about ableist writing. I was all ready for talking about how the reveal was poorly foreshadowed. Here, we have a deaf and blind man who’s ignored, who you have no clue about his existence before a certain scene involving twins being copy-pasted through time-space, and then it turns out it was all a cheap trick. Even when we get to the “After”, Delta is an asshole. But this rant? Technically unjustified. 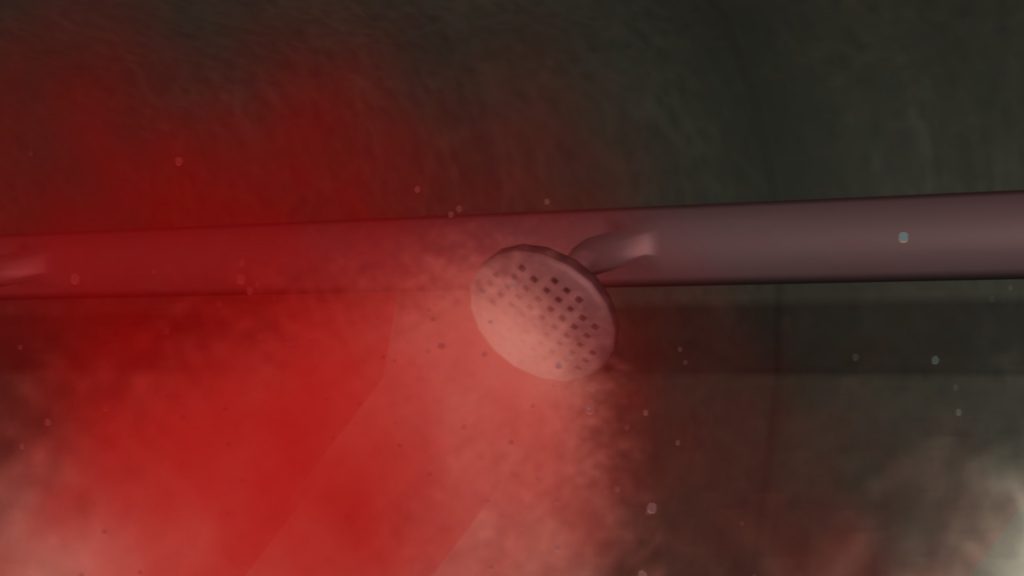 As a side note, the sound design in this scene is extremely gruesome. Kudos.

Because then I looked up signs for Delta’s existence. Oh, they’re there alright. But many of them are super ambiguous, and only a few am I kicking myself for missing (The Q-Team death shower, for example, has three puddles of flesh. Except Sean is a robot, and doesn’t have flesh. Then again, there’s no wires or electronics either.) Shadows on the camera that are actually Q/Delta/Zero and his wheelchair. That one scene where Sean and Eric look like they’re talking to the dog (via a cut between Eric and the dog, Gab), but are actually talking to Q/Delta.

There’s just one problem. A lot of these require a second playthrough, or even a third, if you’re even halfway good at Zero Escape games. I finished the game in one solid block, one night, all achievements. And that hurt my perception of this particular plot point, because, with ZTD, there are no other outcomes. It is a Visual Novel in the purest sense because you get all the Bad Ends along the way, and there is one, True End. So, for many, the question would be “Why go back?” 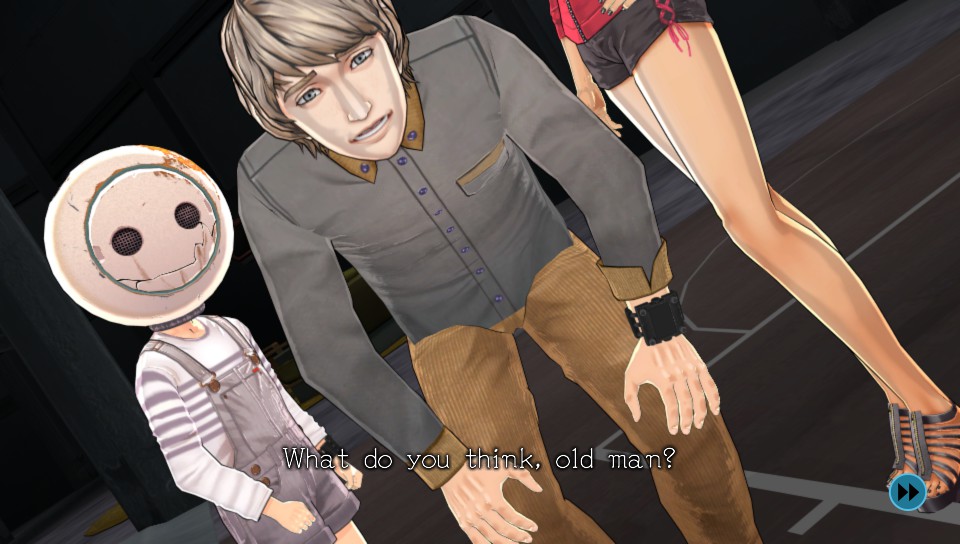 He’s not looking *down* . There’s your clue.

There’s your answer. You sort of have to to properly understand how you’ve been led by the nose. And there’s no incentive to when you think you’ve had a Not Twist pulled on you. It wasn’t. It’s just a lot of the foreshadowing was ambiguous enough that you thought it was.

Of course, it doesn’t stop Delta being an asshole, in any of the timelines he’s in. He’s not a hero for what he does. He’s not an antihero for what he does. He’s a villain who, in his world (and only in his world), technically won. We’ll leave aside the question of “Well, how the hell does Delta exist in all those timelines when he was only born in one and copied to one other?” , because the narrative does leave room for saying he was copied to a lot of timelines, not all of which we’d see. 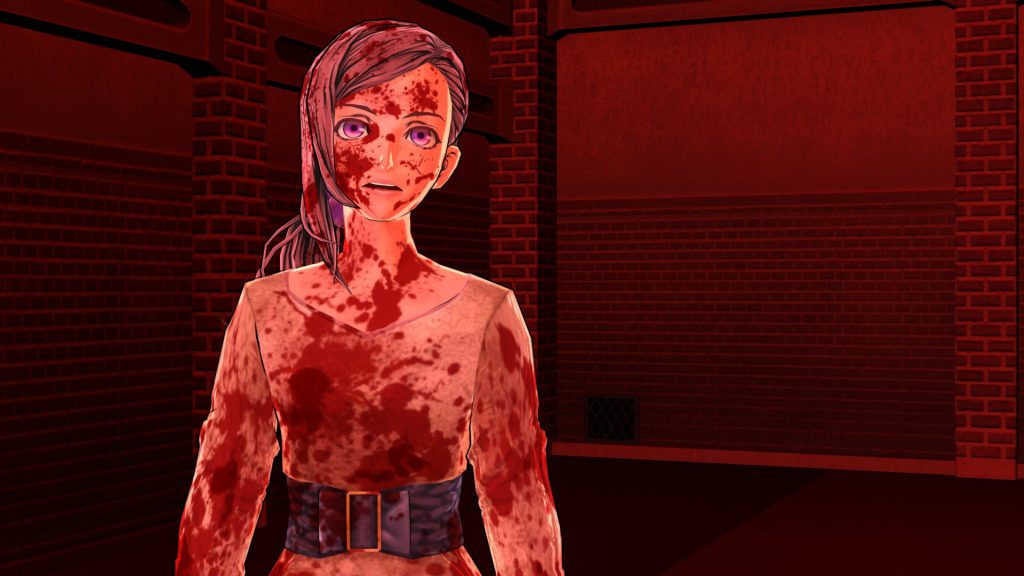 Reminder: Things like this happened. But in different timelines, so it’s *perfectly fine*

So what about Arkham Knight?

Ohhh boy. Arkham Knight kicked up one hell of a stink, not only for its shoddy PC port, but for its treatment of women characters in the games. Of particular note would be Barbara Gordon, whose suicide raised many an angry cry of “FRIDGE FRIDGE FRIDGE!” , and, in the DLC, Francine Langstrom, wife of the man who would become ManBat, who is just… Dead. Before the story even begins. Now, for those who don’t get what the cry of “FRIDGE!” means, it refers to a somewhat sexist piece of comics writing called “Women in Refrigerators”, where the death of a woman character is used purely to motivate the hero or otherwise affect him. If you guessed that the original, trope naming example was of a woman being hacked up and placed in a hero’s refrigerator, you’d win an imaginary cookie. 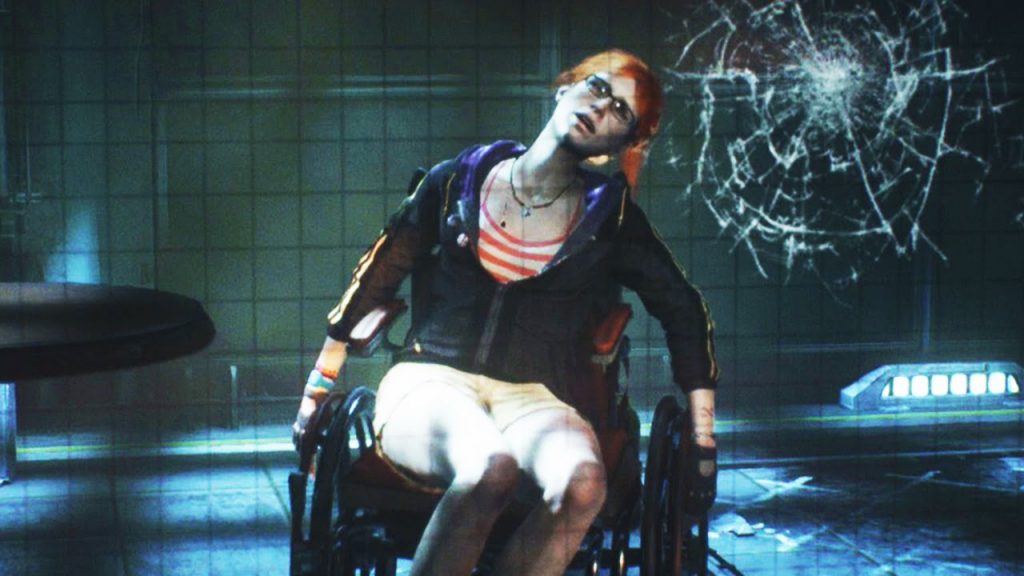 It’s not the only example of writing perceived as shoddy in Arkham Knight, and not the only shitty character treatment. Poison Ivy, despite being a Chekhov’s Immune Person, spends most of the game in jail. She doesn’t, to my knowledge, plead with Batman to be let out, and, until a pivotal scene, she doesn’t mention how her plants, the supposed core of her character, will also die if Scarecrow releases his fear toxin. After this pivotal scene, she sacrifices herself for Gotham. These treatments were bad enough that even male writers, such as myself, Evan Narcisse (Kotaku) , and Elijah Beahm (Gameskinny) noticed.

Of course, things could get missed. And they do. But does it make it any better?

In the case of Barbara Gordon, the words “It gets better later!” have been used often, in one form or another. Barbara didn’t really die, it was a Fear Toxin hallucination. She saves her dad, Batman, and distracts Scarecrow, throwing herself off a building because she knows the Bat will save her. She helps in one of the final fights, hacking an army of drones. 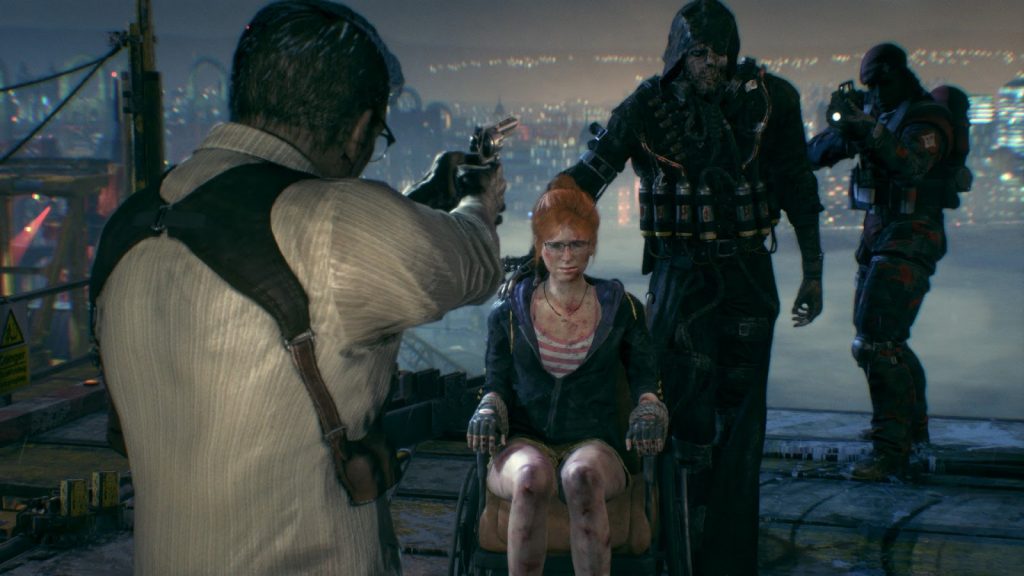 But, as AnnotatedDC (Among many others) points out, this doesn’t change the fact that she spends the majority of the game either a captive (Damselled) or with Batman and Gordon both being manipulated into distrusting each other, leading to this “It gets better later!”, by said fake suicide, which, sorry to say, “Gets Better” crowd, still makes it a Fridging. Similarly, Francine Langstrom, if you go back to the Langstrom lab after doing the Manbat quest, has vanished, leaving a message behind in blood that deeply implies she has become a (Wo)ManBat also. Batman is still emotionally affected into doing the thing. Batman still does the thing. And, to make things even more fun, this is an example of something you most likely will miss, because you’re given no reason to go back there that I’m aware of.

Oh, and Poison Ivy may not have actually died, because there’s a plant where she fell. That one you at least have a chance of spotting without knowing that it’s there… But it’s extremely ambiguous whether that’s a good sign, or a monument to the sacrifice that, unfortunately, doesn’t make the writing of that arc any better. Nor does it make her design in Arkham Knight any less sexualised. People have seriously said to me that the design in Arkham Knight is less sexualised than The Animated Series. Here’s the two side by side for comparison. One of them is slightly better. 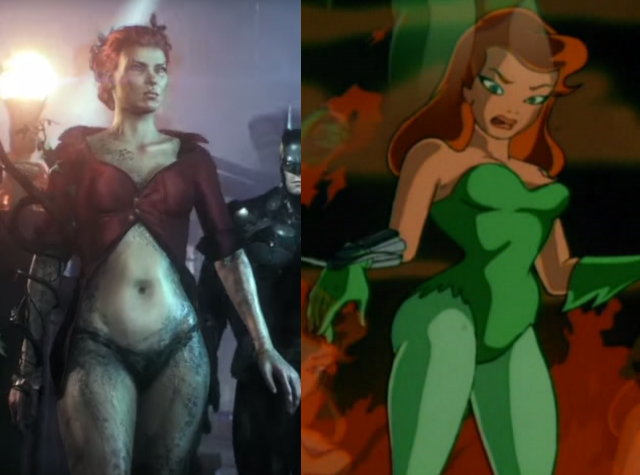 One is a Victoria’s Secret model. The other wears a leotard and leggings. Oh, let’s not forget the crossbow.

Catwoman, who you may have noticed wasn’t talked about until now, does, genuinely, get somewhat better. She’s freed somewhere around the halfway point, and, providing you get all the Riddler Trophies, gets her own back on Mr. Edward Nygma. Of course, you only get the “freed” part unless you do get all the Riddler Trophies (And not even that until you do a certain proportion), and, while the trophies are easier to get, and in smaller numbers than Origins, it’s still a collectathon task that not every Arkham Knight player has done.

So, Arkham Knight: Not quite as badly written as folks say, does have its high points… But still not great.

It’s important, when designing a game, to be aware that tying your story to optional content, or a second playthrough, may not necessarily be a good thing, because if it’s something important to that story, like Dr. Mrs. Langstrom not actually being dead, then perception of your game can become somewhat negative.