Source: Cashmoneys
Price: £14.99
Where To Get It: Steam
Other Reviews: Early Access 2, Release

Confidence is a fine thing, bravado a little less so. So you can imagine my surprise when I see the words “Three years to develop The Book of Demons” (and it’s still in development), and then the intro to the game reveals it’s just 1 part of a seven part, presumably episodic set of games meant to create more accessible versions of popular game types, I worry somewhat. I also find two words that are going to be the theme of this review. 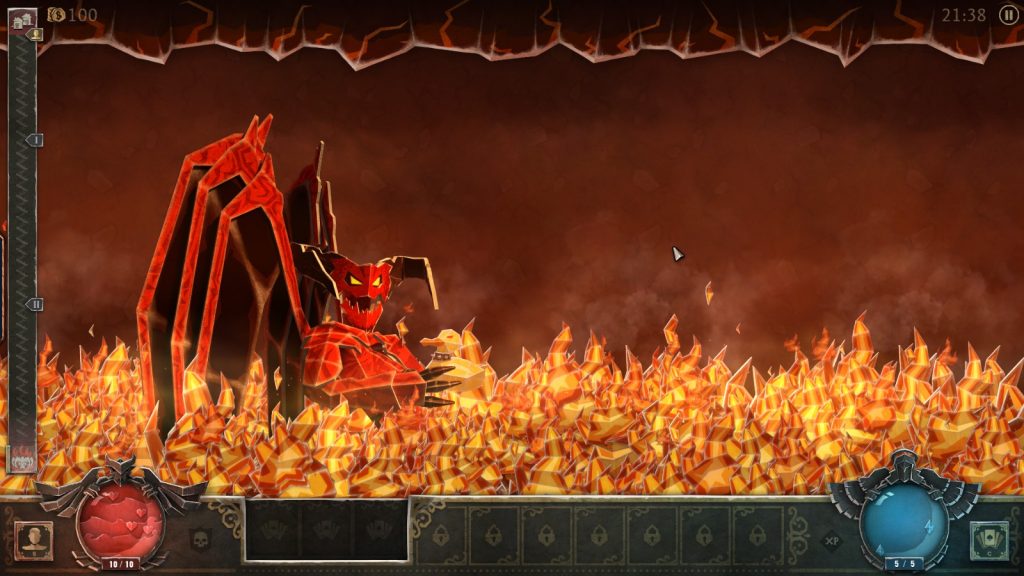 These are not words said lightly. Games do exclude some players, sometimes because the developers don’t get that they want to attract new players… Yes, you can market a game to the “truly hardcore”, but you’re only limiting your audience that way, even beyond genre. Sometimes it’s because of the nature of the genre itself, and the impression I get is that The Book of Demons is trying to make ARPGs “accessible” so people can… Return2Games. Oh ho, ho ho ho ho.

There’s just one problem. I’m not even a third of the way in, and those two words are beginning to sound increasingly hollow. Let’s discuss why. Starting with how The Book of Demons tries to simplify the ARPG formula… Because, in case it wasn’t obvious by the screenshots, this is meant to be a sort of Diablo Lite. There’s a town, it’s been infected with an evil under the church, and hell has broken loose. Heck, the first quest is even called “The Cook”, a reference to Diablo 1’s “The Butcher.” 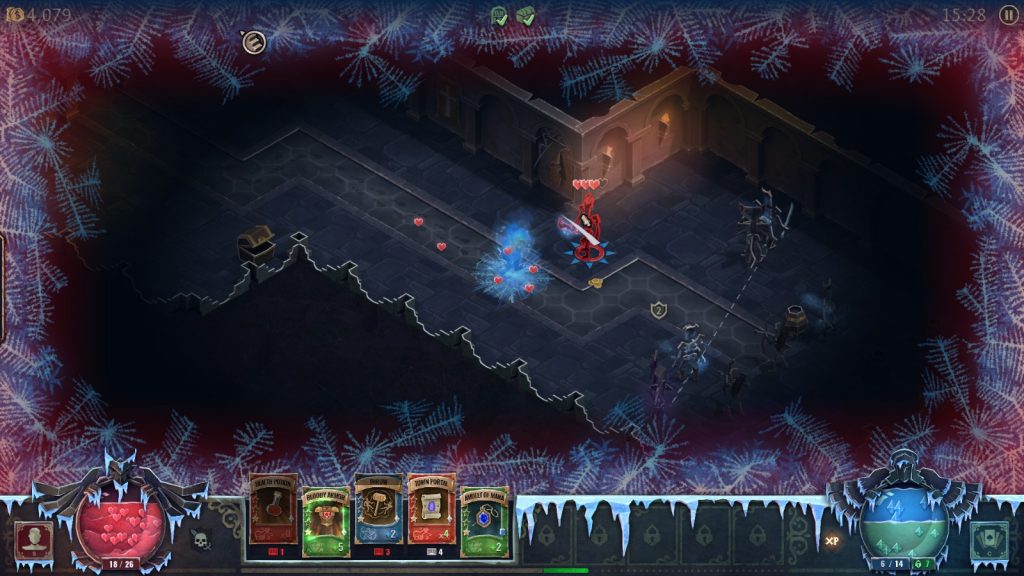 This is about a minute before I died. Can you spot some of the reasons why?

Anyways, there are a couple of ways it tries to simplify, and they don’t… Particularly help. First up is exchanging buying items, using spells and the like, for… Cards that do exactly the same thing. On the one hand, it cuts down on inventory management, because, once you start a dungeon area, you can’t change them out, you can only add cards (if you have room) or change them in town. But while this changes things on the surface, it still means you’re using number keys for potions and abilities and the like, so it just… Limits things. And The Gypsy (let’s not go there, beyond saying “Please can we not do that thing where you have a spiteful, yet helpful magic lady who is a Gypsy, ta?”) even jokes about how using a blacksmith was so inefficient, oh ho ho ho!

If that was the only example of trying to simplify by limiting, and not fully thinking it through, I’d be okay. But there’s one core element that fucks things up righteously. You can only move along a set of rails. You’re still holding LMB to move, and attack, and do other things we’ll get into in a second, but your area of movement is limited.

Sounds okay, until you realise that the monsters you find in the dungeon have no such restriction. Gargoyles quite happily leap into your “able to be attacked” radius, some doing area of effect attacks, then out again. Zombies explode into poisonous clouds that, sometimes, it’s much harder to avoid… And god help you if you’re blocked by a monster in a group from retreating, because yes, that can happen, and unlike many other ARPGs, you don’t have the option of going round. 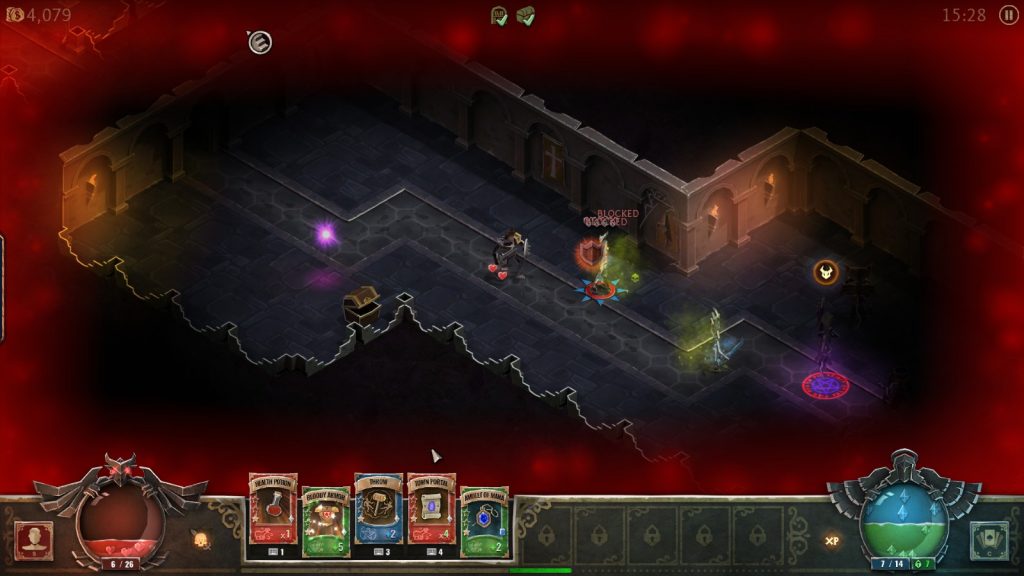 Let’s unpack this. Two of the enemies require holding LMB over their shield before I can hurt them. One is casting a spell to summon two more of these that will make them invincible. If I want to regain *some* health I have to mouse over those hearts too, and those skulls are a poison effect that’s about to make my health sphere go green and damage me, with the option to click on the *health sphere* to remove the poison quicker. Oh, and the spell icon needs to be LMB held over to stop the spell.

That’s what has led to every single death so far, tbh… There have been large groups of varied monsters, and one of them, sometimes two, have blocked my avenue of retreat, and while focusing on them, the other monsters wrecked my day. All the while, I was having to keep an eye on several different things, just like a supposedly less accessible ARPG, with the added funtimes that I could, theoretically stop a spellcaster from, say, teleporting large groups of monsters to my location, or freezing me, or, in later parts of the first third of the game, summon enemies with shields (requiring further click fuckery) that make the spellcaster immune to any and all damage while they’re still alive.

Somehow, in the quest for simplicity and accessibility, Thing Trunk, the developers, have actually made it more complicated. Now, I’m not an ARPG novice. I’ve beaten the first two Diablos, the first Torchlight, and have gotten most of the way through the second (It’s only really the reviewing that really stops me from knuckling down there, as there’s always something new to get through.) I’m having difficulty curve troubles, before I even get to The Butcher equivalent, that I didn’t get in Diablo, the game they’re trying to make more accessible.

Yes, it’s Early Access, and not all of the classes are in yet. Yes, they no doubt have time… But not as much time as they think they have if this is the first in seven games to fill up that intro set of book podiums. This is the sort of project I want to succeed, because making games more accessible means more people play, and I get more people to talk shit over with, and we can then maybe… Just maybe… Stop with all this “Elite Player” bullshit and just get down to play together.

But this isn’t exactly inspiring my confidence that Thing Trunk, despite talking a good game (Make no mistake, their marketing has been very well planned), are the ones to help people Return 2 Games. 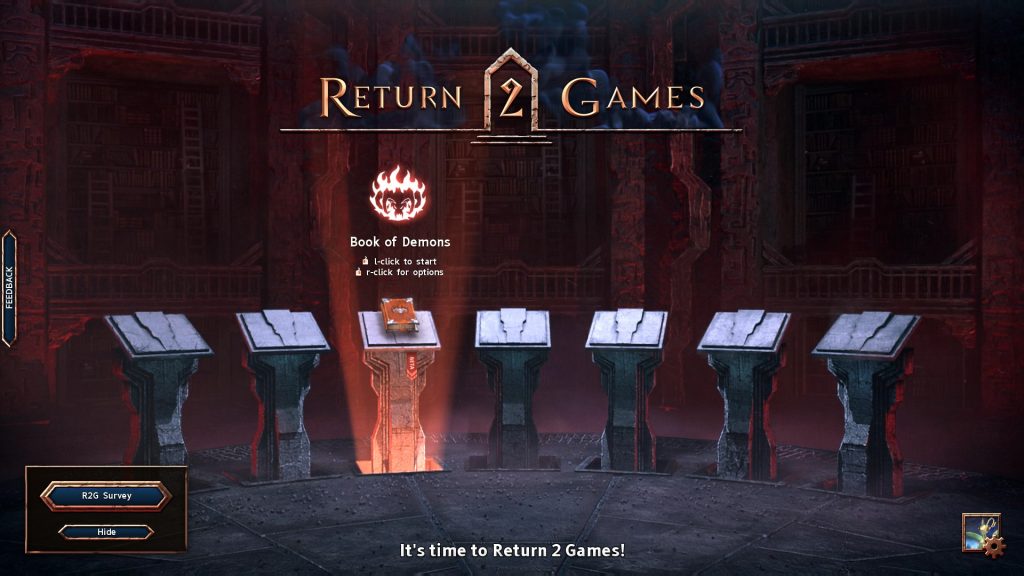 We can, at least, point out that this *is* a laudable goal.

The Mad Welshman started. All of a sudden, he couldn’t turn left… Or right. As the monsters closed in, leering skinlessly as only skeletons can, he tried desperately to wake up.

Their claws disabused him of the notion it was just a nightmare. And that he was going to wake up.