While I’m not much of a fighting game man, I love me some beat-em-up action. There’s something cathartic about beating the living daylights out of goons, beasts, and monsters, all of whom want yo- wait, speedrunning too? 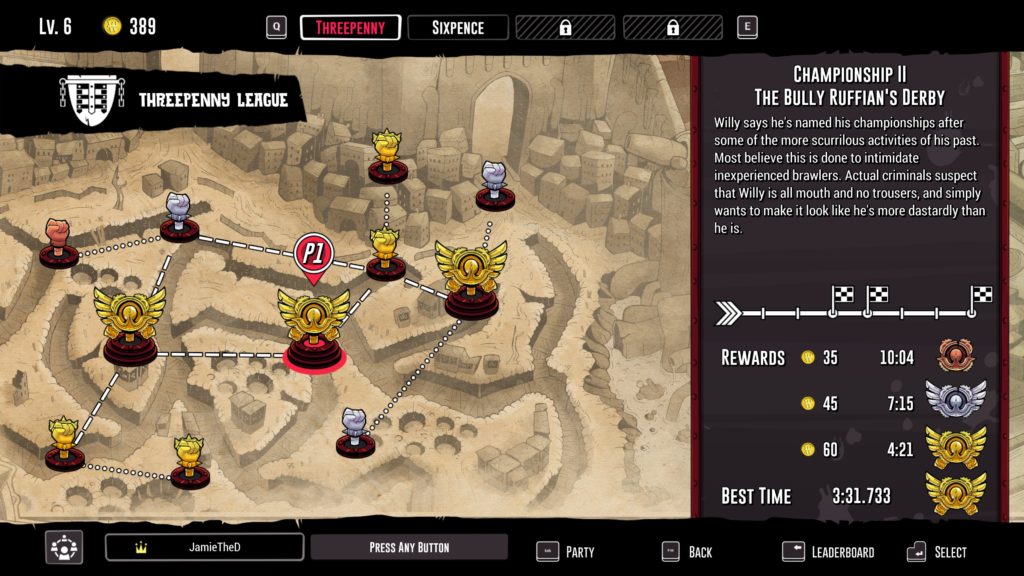 Each tournament of the game is clearly mapped out, and it’s usually pretty clear what you’re meant to do.

Yes, this is Speed Brawl, a side-scrolling arena beat-em-up where the main concept is “Gotta punch fast.”, as you’re rated more by how quickly you get through its fighting shenanigans, or how quickly you hit targets, than how much health you have at the end of it, or how many sausages you picked up from trashcans along the way. And, as with any speedrunning games, there are tricks, little things to give you an edge.

Still, even without those, it’s mostly a fun as heck game about alternate-universe victorian characters (mostly, in the early game, some rad ladies) beating the hell out of mooks and bugs (big or otherwise.) And boy, do I love two of these characters in particular: Cassie and Bia.

Each character, along with equipment to buff them, and colour schemes (both won via playing the game), has a different feel to them, and Cassie and Bia are perfect examples of this. Cassie is a short french pixie-urchin with a cricket bat, and while she’s quick, she’s not the most damaging character, and is slightly more fragile than most. She also has a fast special, and her ultimate move (gained the same way you gain Special meter stamina: By beating things up) is nigh uncontrollable, but a glory off destruction if you can get her to spin around the stage just so. Meanwhile, Bia is big, butch, and her attacks work best at a somewhat specific range (the end of her fists, obviously.) She’s nowhere near as fast, but her specials and ultimate are tight, horizontal, and repeated haymakers, which do a lot of damage. Put the two together, since each level of Speed Brawl is played with two characters per player (and switching out gives a small speed boost), and an orgy of carnage results. 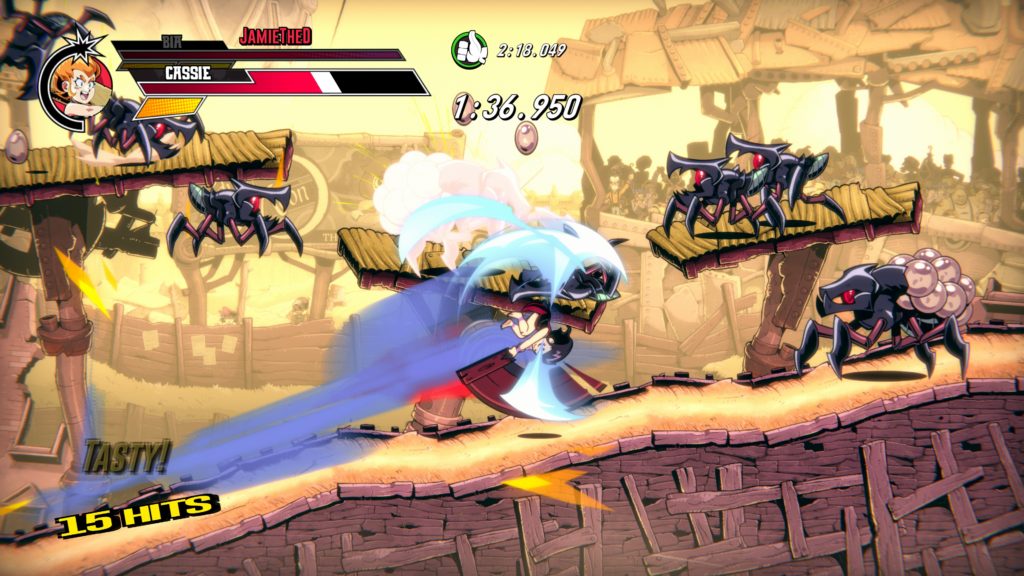 Like I said, when Cassie’s special can be aimed, it’s a gooood time!

It’s good, fun stuff, and it helps that everyone levels up once enough XP is gained, because for certain levels, folks like Cassie are, hands down, the best, while for others, you want something different. It works well aesthetically, the music is pumping and joyous, and, while the controls and later enemies (who have defences, or teleports, or ranged attacks) take getting used to, it’s definitely fun.

If I had any real crits for Speed Brawl, it’s that some enemies just feel more annoying to deal with (The large Rippers who are invincible from the front, for example), and that items don’t always feel like they do much, even though they are definitely increasing damage, and adding status effects. Part of this is that it’s chaotic as heck, and it can sometimes be hard to read what’s going on outside of your immediate circle of “Thing I’m pummelling right this second”, and this gets moreso with two players.

Then again, it also goes more quickly and is fun as heck with two players, so… Tradeoff? Either way, I like how Speed Brawl messes with the 2d beat-em-up formula, and, while it has a number of buttons, it’s still fairly easy to get back into. 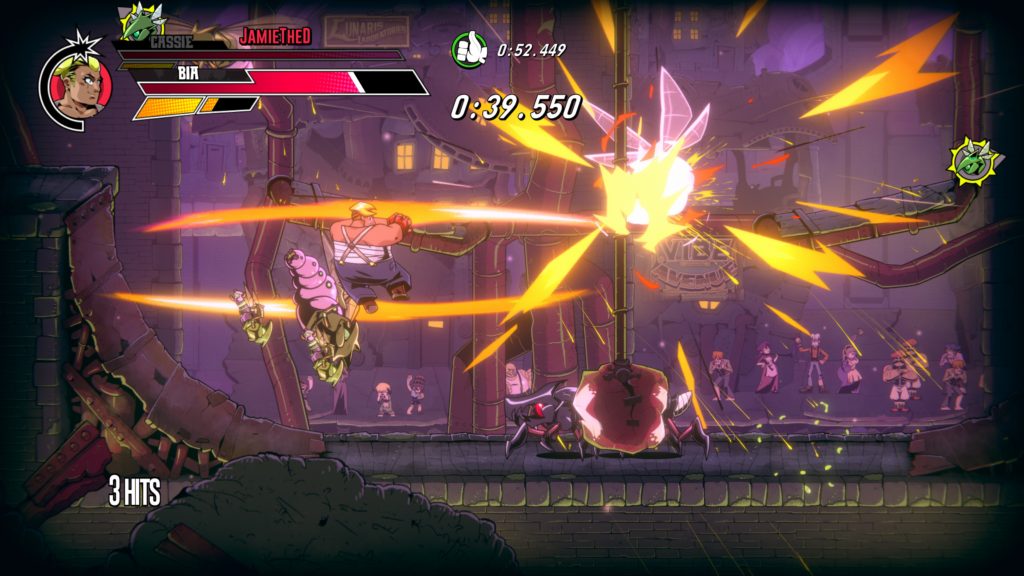 It should also be noted that the animations have a good sense of impact. Or… Multiple impact, in this case…

The Mad Welshman loves Alternate Victorian times, because they really appreciated the value of a good top-hat and moustache. And yes, that is shallow.