Source: Cashmoneys
Price: £11.99
Where To Get It: Steam
Other Reviews: Release

Slaying a sentient tower with all sorts of gribbleys living in, parasitising, and, to an extent, defending its ancient heart is, as it turns out, a difficult endeavour. Although it must be said that, at least some of the time, that’s definitely my fault. For example, spending lots of energy on a multiple attack card to try and kill something that reflects more damage than I’m handing out? That wasn’t a wise move.

Reading an ancient and maddening book when I was low on HP, and I already knew I didn’t have the HP to read it? My fault. 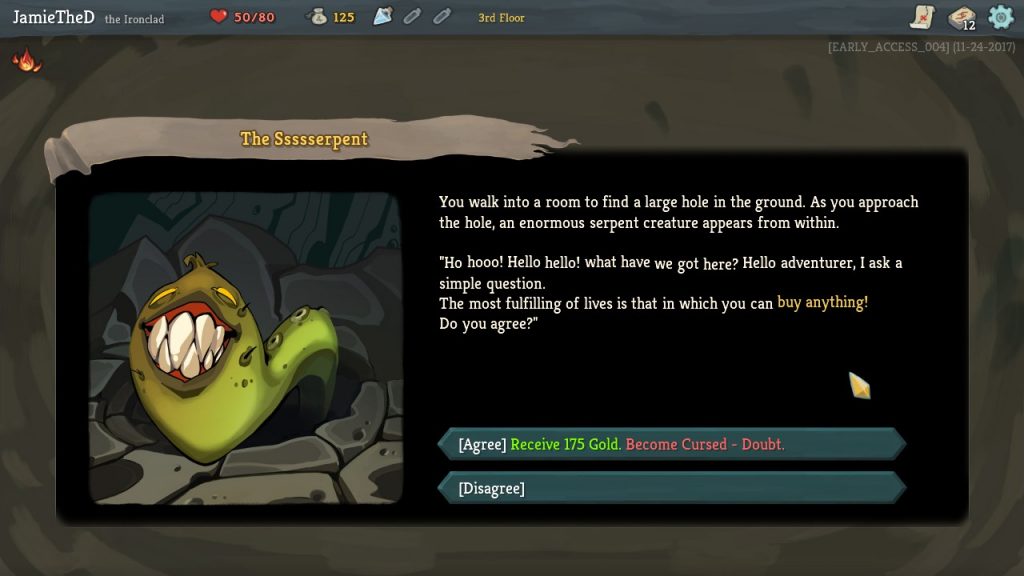 Ughhh… I will forever doubt if this grinning snake really was just giving me money.

Taking this path absolutely filled with monsters, and not a lot of healing or mystery options, because reasons? Yep, that bit me in the ass.

Still, Slay the Spire is, for all these things that were definitely my fault, a tough, turn based, choose your own path RPG brawler with a mechanic we seem to be seeing more of: Cards for skills, attacks, and powers, with what you can do limited by both hand size and Energy. And, you know? It’s got a fair few options spread among the 2 characters currently available.

The Ironclad, for example, specialises in defence, but also has nasty little tricks like Armament, a card that not only adds defense, but upgrades either a single card, or your whole hand. Or perhaps trading HP for strength, healing through murder, or Rampage, a card that slowly accrues damage with each use. Healing a little after every fight, he’s the long hauler.

The Silent, by contrast, has poison, and can quickly build up a deck where she builds up silly amounts of Energy and cards in the hand, for murderous barrages and a host of status effects. Sure, she doesn’t have a lot of defense, but when she gets going, things die very, very quickly. 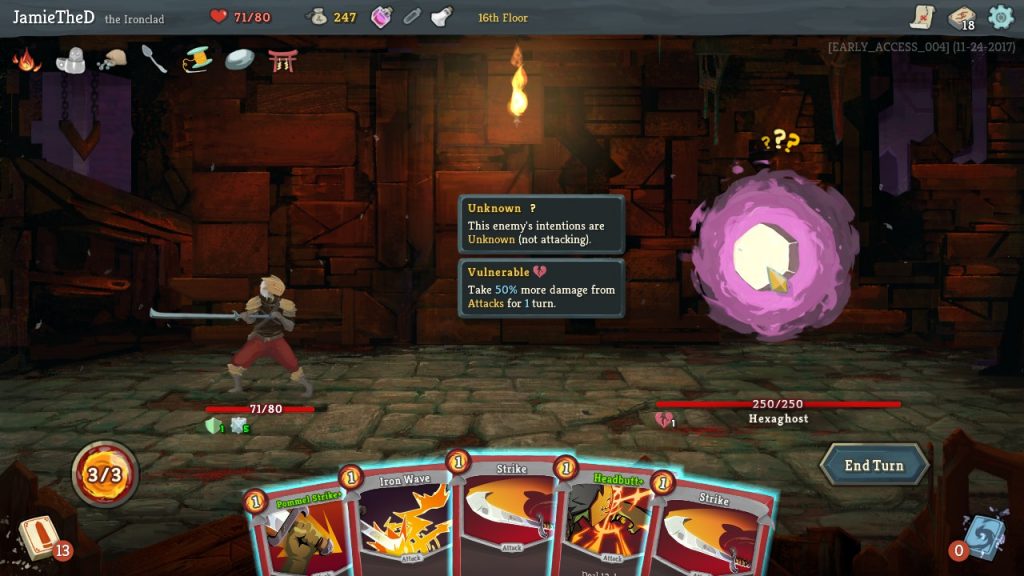 Pictured: A lot of options, from the relics I’ve obtained, to the cards in my hand. How will I deal with this goshdarn ghost?

Add in the Relics, items that change up how things go the entire run, and the “Colourless” cards, available to all characters if they can find them, and you have a game with a lot of tactical options… If you can get them. After all, this is a procgen game, and there is no guaranteed route to a single build. The only thing that doesn’t really change… Is enemy patterns. Thieves gonna thieve, Priestesses gonna buff, and thorny orbs are only gonna get thornier the longer you leave them.

Visually, I’m quite fond of it. It’s simple, but it’s also very clear. You know what’s what, from the enemy intent, the tooltips are solid, and only with extremely silly builds do the cards become a little hard to distinguish. A little. Musically, the game’s orchestral tunes really set the scene, the drama, and fit well.

So, lots of tactical options, with adaptability required due to procgen? Okay, good. Good music? Yup. Accessible visuals, simple controls (It’s all mouse, and turn-based)? Good. Pattern based enemies and bosses being difficult the first time, but once you know the pattern, you at least know what you’re in for, all with interesting visual design? Yup. All in all, a solid game so far, very promising. When the worst things you can say is “Not for folks who hate turn based RPG combat, because it’s at the core” and “Some of the animations are a little lacking (Compensated for by solid soundwork)”, then you know you’re off to a good start. 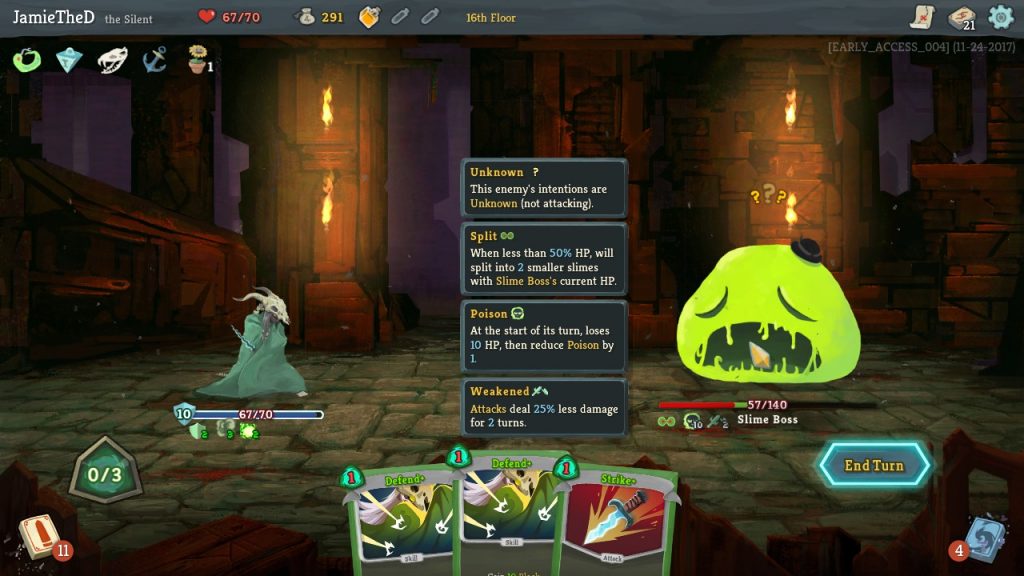 The Silent is clever. She knows poisons that even affect the dread Slimes.

The Mad Welshman idly wonders about the Hexaghost’s backstory. I mean, was it a bad hexagon in life, or did it just have unfinished business?