Freaky Awesome is one of those ideas that looks fun on paper, but alas, the execution is a little lacking. The idea? A silly, twin stick melee and shooting romp, in which a badass action star who has a soft spot for his dog goes to the abandoned Chemical Factory to find them, only to find… Gruesomeness.

It has at least some of the right elements. Pumping and threatening bass electronic tunes? Yup. Slime and goo? Core to the game. Good visual designs? Yup. But it’s when it gets to play itself that it starts to feel… Well, not so well thought out. Partly through the procgen, partly through some base choices made. Let’s start with the mutations. 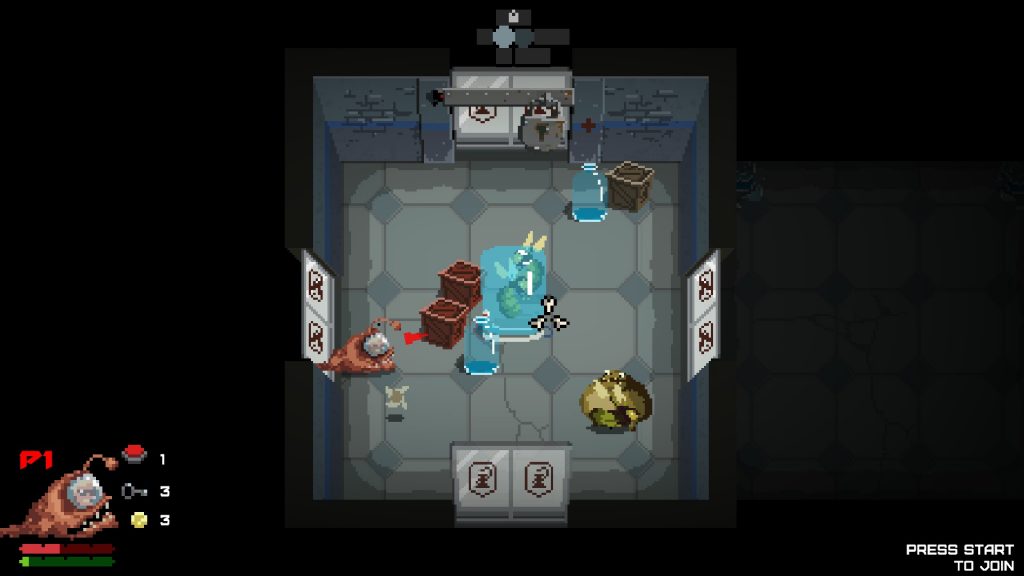 When you first start a profile, you have two mutations you choose between for your character (For lo, he has been mutated by toxic waste, in true 80s fashion.) A one legged chicken-man with a kick and a dodge roll, and the Grub, able to lay worms and whip his head to attack multiple enemies at once. As you get to new zones, you can, with an expenditure of health, coins, and keys, fight a new mutation to keep it, in every stage. But the ideas for mutations run out relatively quickly, and their secondary abilities… Well, of the characters I’ve unlocked (Almost all of them) , only Chicken’s really sees any use at all, because that dodge roll has invincibility frames, and he’s the only mutation that has such a deal. The rest? Either they take long enough that they’re not worth the risk of being hit compared to, say, backing away while attacking, or they’re just not worth it period.

Example: Head. Head has a headbutt, the same way Fish has a chomping charge, Chicken has a roundhouse kick, Scorpion (presumably, not yet unlocked) has a slash. But his alternate ability is… To throw his head across the room, piercing enemies along the way, for… The same damage as if he’d headbutted them. Until the head is retrieved, no attacks are possible. Hrm… Which to go for? A headbutt that definitely hits everyone in melee range (Which, since many enemies are melee and want to get close, is a lot), and is quick… Or throw my head, do one hit, and then have to run away. Oil, with his fiery slime thrower and oil puddles, is a similar proposition. Shoot while running away, or take time to drop a slowing puddle that he can set on fire that doesn’t really work because it relies on chasing enemies not chasing you, and being stuck in the puddle.

Of course, I’m emphasising this “Hit them more often, as opposed to special abilities” because of both the monster and room design. The majority of enemies in Freaky Awesome rely on melee, and chasing you. Some are actually really good at chasing you, such as a three legged beastie that, no matter how fast you are, is probably going to at least be able to start attacking you at least once every second or two if you’re constantly moving. Others have area effect attacks, such as the chompers or big fellers with a ground pound that… Well, here’s where the rooms come in. Those ground pounders will spawn in small rooms. And the first area they’re introduced (Furnace) further restricts those rooms with fire vents in both the floor and the walls, the former of which are hard to spot on your first try (When they’re white, that means don’t step on them, they’re hot.) 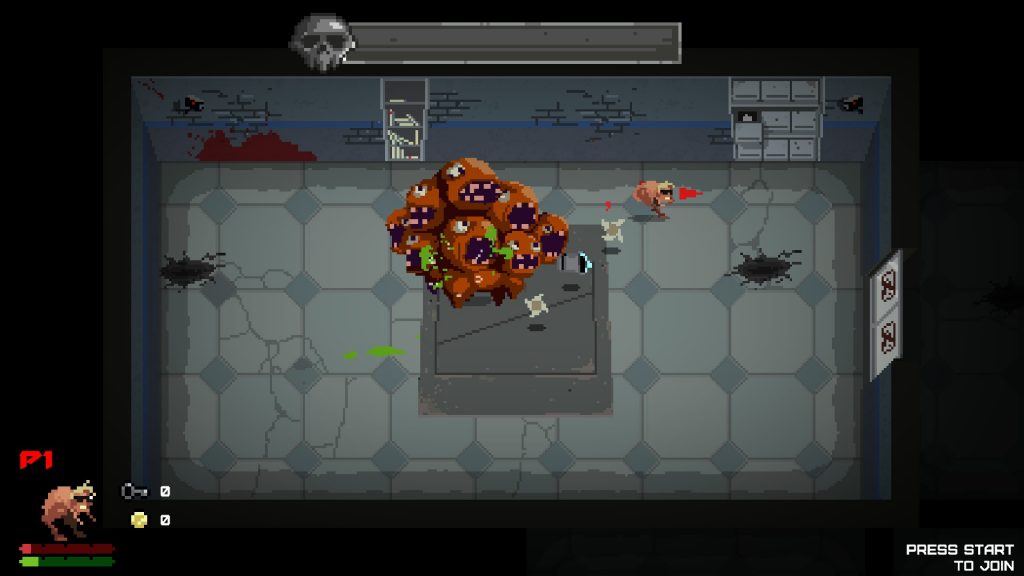 This thing… This thing I have rude words about. Unless I have several follower items, in which case I yawn and kite, yawn and kite.

As you might have guessed, this makes some rooms not so much an exercise in not taking damage, but in how much damage you take, and that… Well, that isn’t great. Outside of those rooms? Well, even with a melee character, it’s surprisingly easy to kite most enemies, so the damage you’re going to be taking, with the exceptions of the Furnace and “Final” Organic area, is mostly from inattention to enemies, rather than being heavily restricted by the environment. Bosses, similarly, vary between the “Only take damage if you’re not paying attention” of Spider-boss and the Missile-Bee, to a larger version of the chompers that chases, has his area chomp, and, on “Death”, splits into two, and then again into four smaller versions, each a little faster, with a little less hit points, but more likely to do some damage if you don’t have a very specific kiting strategy to get them all chasing you in an orderly fashion (And even then, it’s risky.)

I could go on like this, but this, honestly, is a problem that hits nearly every mechanical level. Followers can break certain encounters over their knee, or they won’t do damage when they’re meant to. DNA is meant to be an incremental method of improving, as are the Mutation unlocks, but none of the mutations feel like much of a “Must have”, and unlocking them is a grindy process, not least due to the fact that giving Health is a factor in their unlocking. DNA is just grindy, although that grind presumably gets better once you’re not concentrating on mutations, as you can get 2 per zone (One from a shop, one from the boss.) 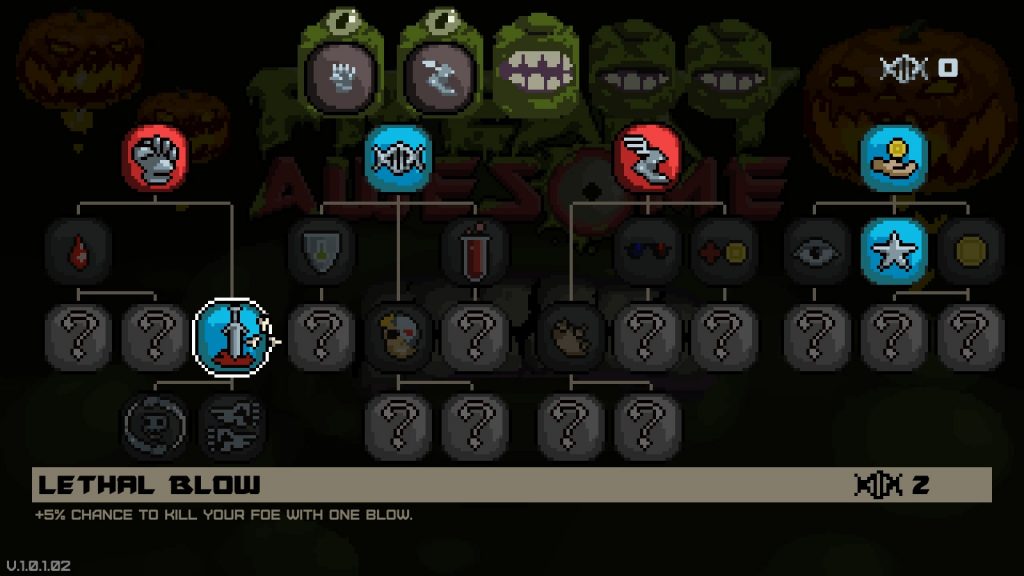 Not pictured: That third slot for a third benny costs 12 DNA. God knows what the fourth one costs.

As such, while it does have its freakiness, it’s monstrosities, it is, sadly, mostly surface level, and I can’t honestly say I’ve had much fun unlocking anything, or feeling rewarded for doing so. It’s just… Another day in the life. And that, unfortunately, doesn’t look like what the developers were really aiming for.

The Mad Welshman does not mutate. He already has all he wants: A nice, twirly moustache.