Ah, the noble highwaypeople, secretly nobles or derring doers! Oh, wait, no, that wasn’t quite the way it went, generally speaking. But there is a vast literary tradition of the noble turned criminal for Good Deeds, and this, generally speaking, is what Shadowhand is about. Also Solitaire. 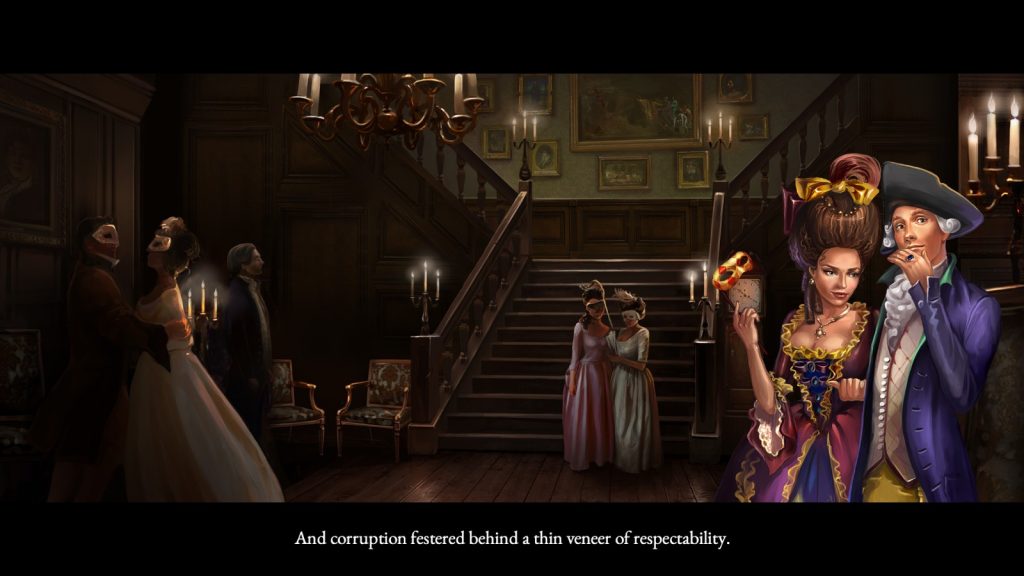 See? Corruption. ‘Sright there, and we’re gonna fight it, as Lady Cornelia Darkmoor, aka… SHADOWHAND.

Shadowhand is an odd mix, and one I’ve only seen occasionally in the past: A solitaire game, with RPG progression, inventory, and special abilities, and, because RPGs do, generally speaking, need a story, a story about a noblewoman who, at first, dons a highwayman’s costume to find her maidservant, but then gets drawn into deep intrigue, fraternising with the criminal element, mystical ladies in caravans, and grave-robbing, to name but a few moments.

However, enjoyment of the game will really, really depend on how much you like Solitaire, that card game of trying desperately to beat random chance by putting a card 1 higher or lower than the card you have drawn into the deck until there are either no cards left in the layout (Go you, you won!) , or no cards left in the deck (Aw, boo, you lost!) Because it is very much the core mechanic here. There are elements that make it easier, harder, or more interesting in those aforementioned RPG elements, like Luck, a double edged stat that presents a percentage chance of any move you make getting rid of a second, random card that you could have picked, but it remains a little bit chancy that any layout is solvable.

That’s less of an issue with combat, as combat is effectively “Try to get chains while preventing your opponent getting chains, so you can wallop them harder than they wallop you.” A thing which becomes more of an issue when the hit-points and defense keep going up, the weapon damage keeps going up, and when a chain really hits, it hits… Either way. Attacking ends a turn, but that, also, becomes a consideration when items that give extra turns, or punish you with bleeding for taking your turn come into play. 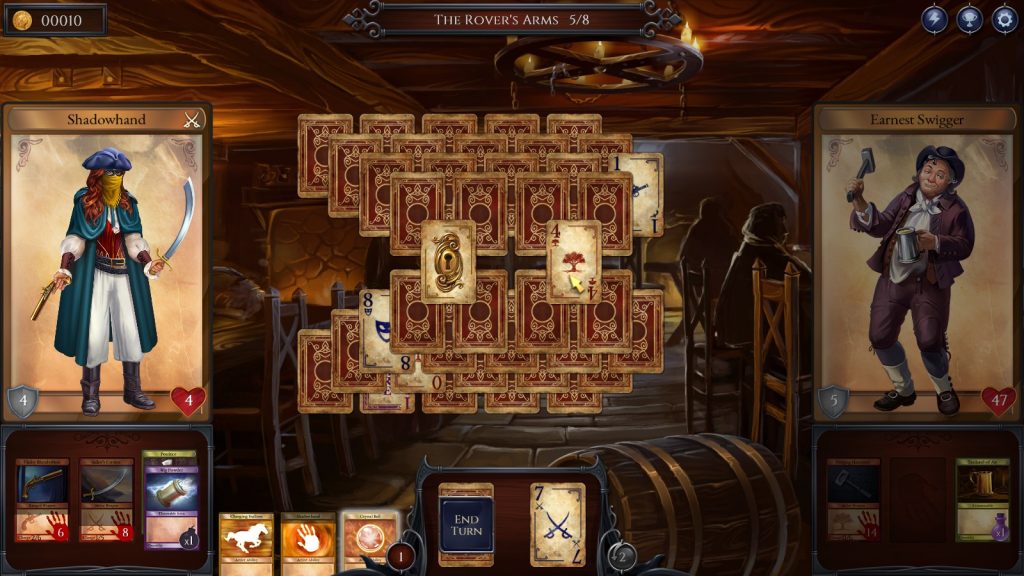 This, er… Fine gentleman managed to get me to hit the retry button something like 4 times. This was near the end of the second.

So… There’s depth to this whole Solitaire shebang, but it’s depth that becomes rather frustrating early on. Yes, okay, I can infinitely retry pretty much any segment of a chapter until I ace it. But, the further I’ve gotten, the more I’ve been hitting that retry button (and, occasionally, taking advantage of the bit I’m thankful for, being able to change my equipment before I actually start each combat, search, or gimmick level.)

You might be thinking, at this point, “Wow, he really doesn’t like this!” Not… Exactly. What I’m trying to get across here is that, yes, it’s a solitaire game with depth, some nice, relatively static visuals (Combat has short animations, and cards have short animations, but character dialogue is the static image of a character and textbox we know and love from Visual Novels and the like), some okay music (It fits the theme, it doesn’t get in the way, but it’s not terribly memorable, either), and a story (Which we’ll come back to in a second), but Solitaire, however it’s dressed up, given depth, or the like, remains a game that frustrates the hell out of even those of us who enjoy Solitaire from time to time.

Which, finally, brings us to the story, such as it is. It is not, strictly speaking, a bad story in the broad strokes. In fact, it’s one we’ve heard a few times: A noble accidentally ends up a highwayperson, finds some corruption (In this case, her family fortune is being embezzled in some larger scheme), and decides to lead a dual life in order to halt this corruption. It’s mainly that, as sometimes happens, the story takes a backseat to the game, and the tone of the story thus suffers. Oh no, dark deeds are afoot in the graveyard, and our heroine must find a treasure map by graverobbing, while also defeating Thug, Other Thug, and the boss of the area, mean ol’ gravekeeper Doug Hole! This is kind of a shame, as, like I said, the broad strokes are the bones of a good yarn. But it’s a yarn that doesn’t flow, tonewise or in terms of pacing, and that makes me kind of sad. 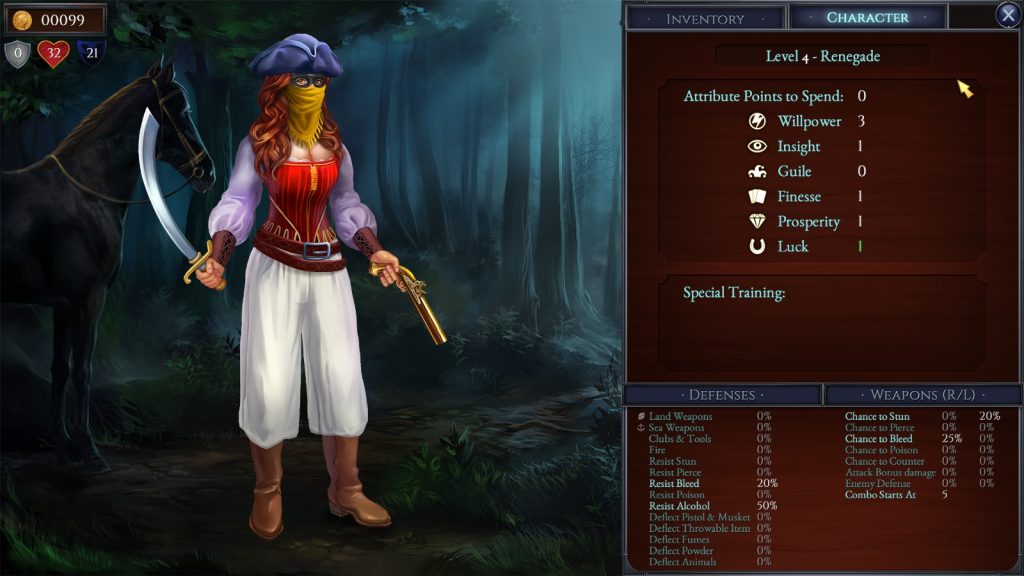 Never let it be said that Lady Shadowhand doesn’t take advantage of the finest of the Regency Roguery line!

Overall, as I’ve pretty much been saying the whole time, it really depends on how much you like Solitaire, whether you like this or not. If you accept Solitaire’s flaws for what they are, then you have a perfectly fine Solitaire game that adds depth to the basic formula, wraps a story around it, and has some interesting additions. Myself, I’m not that big a fan, so I only see myself coming occasionally back to this.

The Mad Welshman would like you to step down from the carriage gently and hand over your valuables. He also thanks you for your custom.