Source: Review Copy
Price: £3.99 (option to donate more on Itch.IO)
Where To Get It: Itch.IO, Steam Page (For the Beta)
Other Reviews: Early Access 1, Early Access 2

When last I reviewed R-Coil, I screamed a lot. It’s unsurprising, considering how tense and twitchy a game can get when, for example, your shields are all gone, and so it’s exceedingly important you murder everything before it murders you, while also doing your best not to crash into asteroids. All of this while your thrust is holding the mouse, while firing is tapping the mouse (or gamepad, which the game prefers) , and both will, in different ways, send you careening around R-Coil’s Asteroids inspired arena. 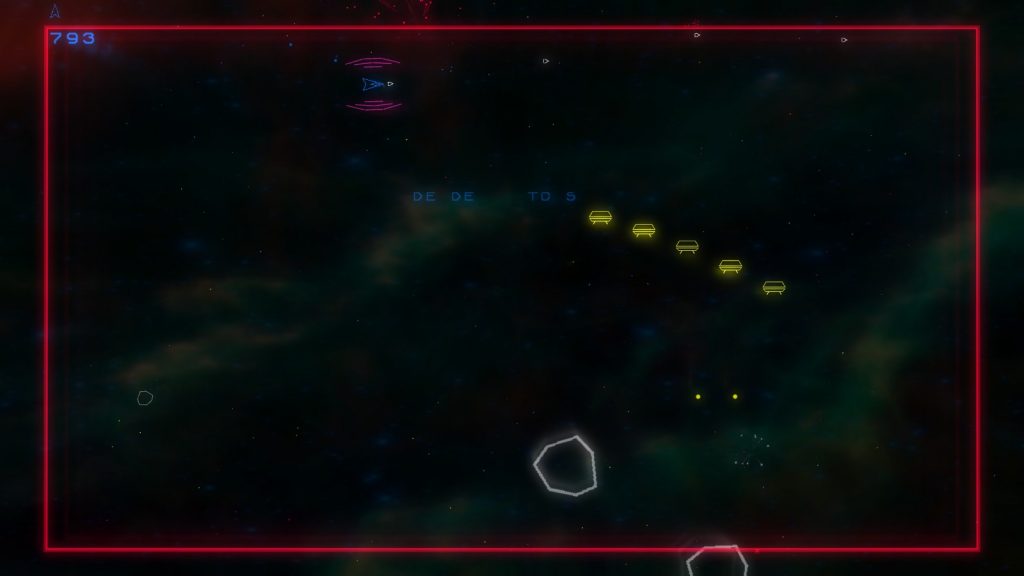 Right now, I’m lucky. These folks only fire upwards and downwards, so I can take them out…

It’s a lot of fun. But it should also be noted how, relatively speaking, the game is quite friendly. On first loading, it asks three important questions. Do you want to play in its no pressure mode, where yes, you die, but you never game over? Do you want its flashy, arcade style screen shakes, glitches, and flashing text to be turned on or off? Do you want to reverse the joystick? Save, let’s get into it, and, oh, the game’s designed around a gamepad, with mouse being an option that plays a little differently.

Not many games ask you, straight up, if you want to ease your eyes or brain, just get into the game to see what it’s like. So… Brownie points there, and, if you are completely new to R-COIL, I would recommend those answers be “Yes, No, and Whichever you’re used to.”

Apart from that, well, my opinion remains unchanged from the last review, and so do the majority of the basics. Mouse is still a different play experience to gamepad (Mouse is left and right turning, with LMB for thrust/shoot, while gamepad is thumbstick for direction, and face button(s) for shooting and thrusting) , powerups and weapons still hold an entertaining variety of both effects and drawbacks, which makes for the experience of… “Do I really want this powerup?” , the sound is retro arcade inspired, minimalist, and works with its vector graphics experience, and the enemy variety is quite cool, even in the early stages, from wildly spewing space turrets, to finicky, dodgy sniper drones, to UFOs of various descriptions, to, in true arcade fashion, minibosses and the screen splitting laser. It is highly recommended you kill those, by the way. 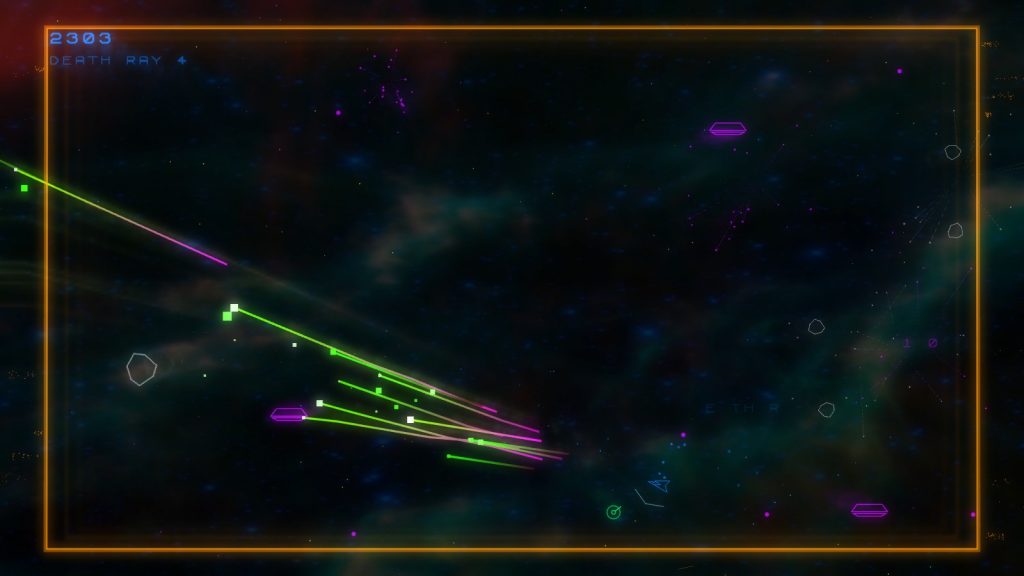 An exercise for the reader: If the Death Ray has massive knockback, as it does, what kills me milliseconds after this screenshot, the bullet or the UFO behind it?

R-COIL remains, as it has been from early days, an interesting, amusing, and twitchy arcade experience that delights me while adding a tactical twist to an ancient formula. All worthy of praise.

The Mad Welshman has nothing clever to say here. All the clever has been done by the game.