Sometimes, I’ll freely admit, reviewing can get a little odd. But when given the opportunity to compare a game’s experience both before and after a major free update, it’s an interesting window into game updates that would normally be reserved for Early Access releases.

That doesn’t, unfortunately, mean I particularly get along with Mercenary Kings, even after its Reloaded update. But in some areas, I can definitely see improvement, and I see this as a good thing, overall. Let’s get into it. 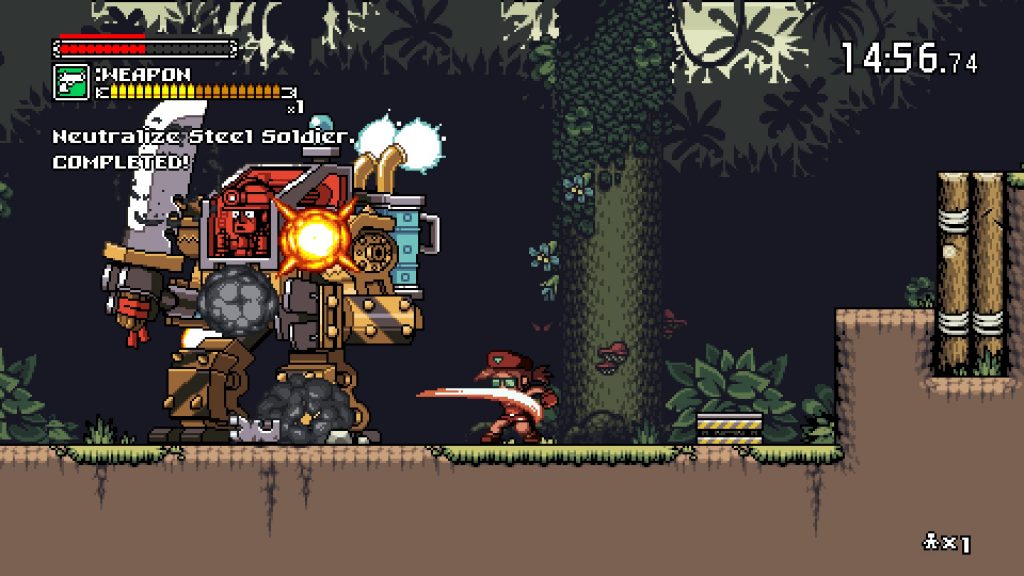 Big, lumbering… Does a hell of a lot of damage if it hits you though!

Mercenary Kings is a 2D platforming shooter with quite a few elements that are inspired by the gameplay of Monster Hunter and its ilk. Several repeatable missions in areas that expand as you get further toward the end of each chapter, with random drops from a set pool that depends on the enemy or, in the cases of boxes, on the mission itself. Said drops, along with the money reward, goes into unlocking or buying kit, skills, and usable items, which make your pretty damage and defense numbers go up, allowing you to fight bigger and nastier things… With the caveat that really big numbers tend to have a tradeoff, like weapons being heavy enough that you can’t run or jump nearly as well, for example. Mostly, getting through is a combination of knowing enemy patterns, good item usage, and picking your fights.

Thing is, flow becomes very important in such a game, and, before the Reloaded update, the early game flow was painful, at best. Certain enemies (Shield Joes, Pyros, and Drillerillas, for example) felt more like living roadblocks than an organic part of the experience, hard to avoid even with the lightest of equipment, and equally annoying to kill without damage, and, beyond the weapons, early game progress was slow. 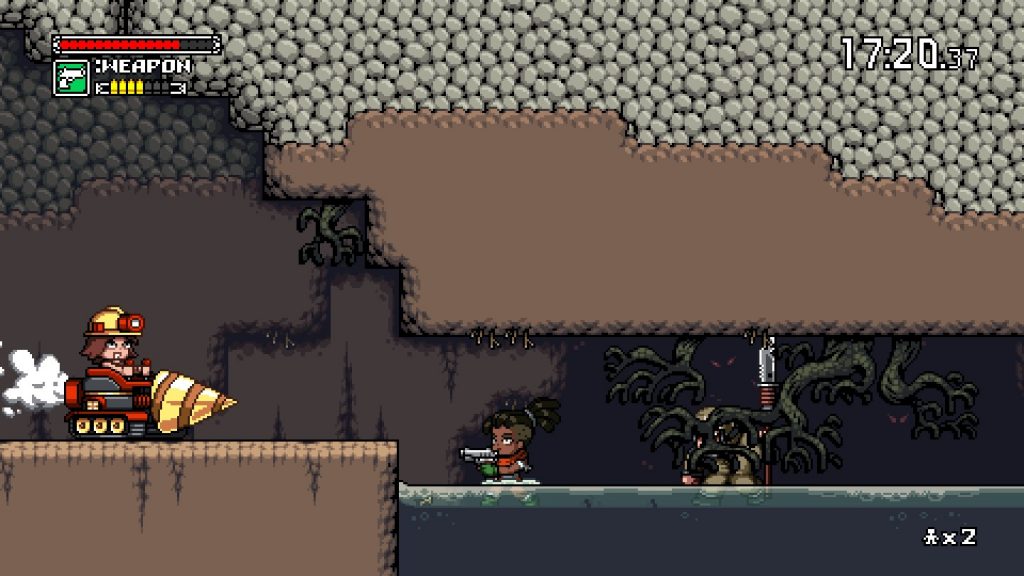 Right is, in this case, the safer choice. This drill kills bullets.

Aesthetically, the game was (and is) strong, with the one notable exception being Empress (the original woman character) being… Well, an Escher Girl in her title appearance. Otherwise, the spritework’s good and clear, and the music is reminiscent of quite a few nostalgic treats, mostly platformers and shooters (The camp music, for some reason, reminds me of Blake Stone, an old Apogee published first person shooter. Maybe it’s the sound font.)

Has the Reloaded update improved this? Somewhat. The aforementioned roadblock enemies still feel like roadblocks, and are still somewhat annoying, but the weapon updates and balancing has definitely improved things, even if the early game flow remains a little slow and grindy. The two new characters are a welcome addition, as is objectives clearly being shown on the map (Something I don’t recall before Reloaded. Happy to be corrected if it was the case previously, and I just didn’t see it.) The bosses are mostly pretty interesting, even if I quickly saw the base enemies as a chore, rather than a challenge, or source of enjoyment, and seeing various new knives and guns is always a pleasure to my monster huntin’ mind. 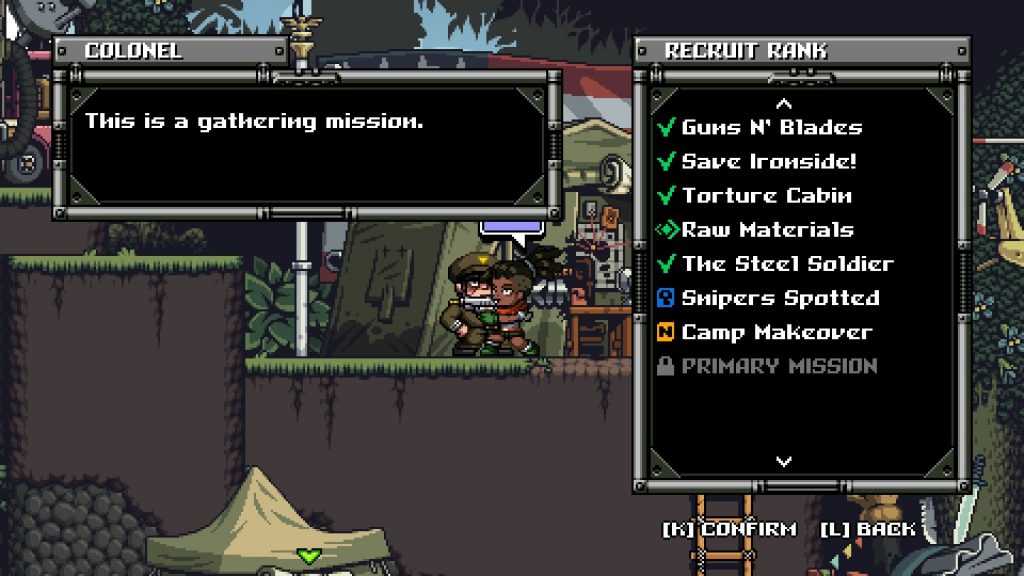 *Sinks to his knees, fists clenched to the sky* GATHERING MISSSSIOOOONNSSSS!!!

As a platformer shooter, Mercenary Kings Reloaded feels a little slow (unless you have the sprinter upgrade), a little grindy at first, but it has taken steps to make its early game a little more friendly, and this is one of the few times where I will say “It Gets Better.” It’s no Contra, no quick, twitchy game this (Although some bosses do require a good handle on movement and dodging), and 4 player multiplayer definitely helps when you have friends to play with… But, as mentioned, despite its influences, it’s sadly not my cup of tea. Regardless of my opinion, though, I will state: The Reloaded update is an improvement. Respect for that.

The Mad Welshman killed 23 CLAW soldiers to make this review. It would only have been 7, but fabric drops were low on the mission he was on.