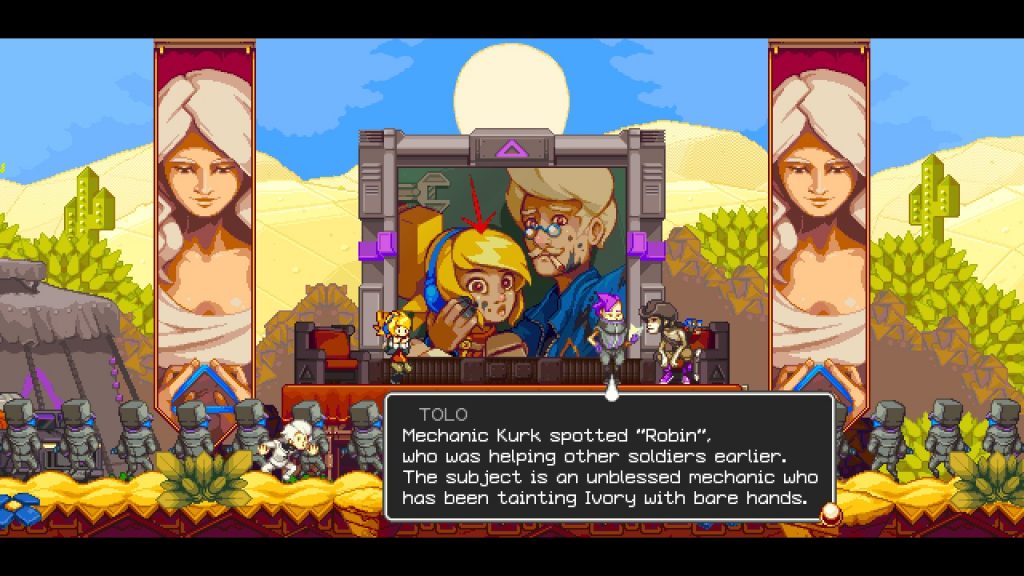 Of course, sometimes it can be a little hard to tell *why* an institution is cherished as an outsider. Who do you love and who loves you? YES!

It’s kind of interesting that this is the title of the game, not because of the story (involving a mechanic rebelling against a techno-religious regime that’s repressive because ??? . No, they’re demonstrably evil. It’s just their reasons are unclear for the majority of the game) , but because Iconoclasts, in its way, is trying to shift things up mechanically. Nominally called a Metroidvania, it nonetheless does… And doesn’t fit that mould. More accurately, it’s a puzzle platformer where even the combat against the many bosses… Is a puzzle.

And, at times, the game contains the frustrations of both. “Oh, sod!” I mutter, as I backtrack three times round an area to solve one small puzzle. “Wait, what am I meant to do here?” , as I get lost, or encounter a new enemy who’s immune to what’s worked so far. “Wait, my reward for solving this bit is… more, with a different element? ARGH!” as, yes, puzzles mix things up, and bosses often have multiple phases. That isn’t to say there isn’t joy, or the appreciation of a well-crafted fight… But poor explanation or signposting often leaves me irritable as I play through. 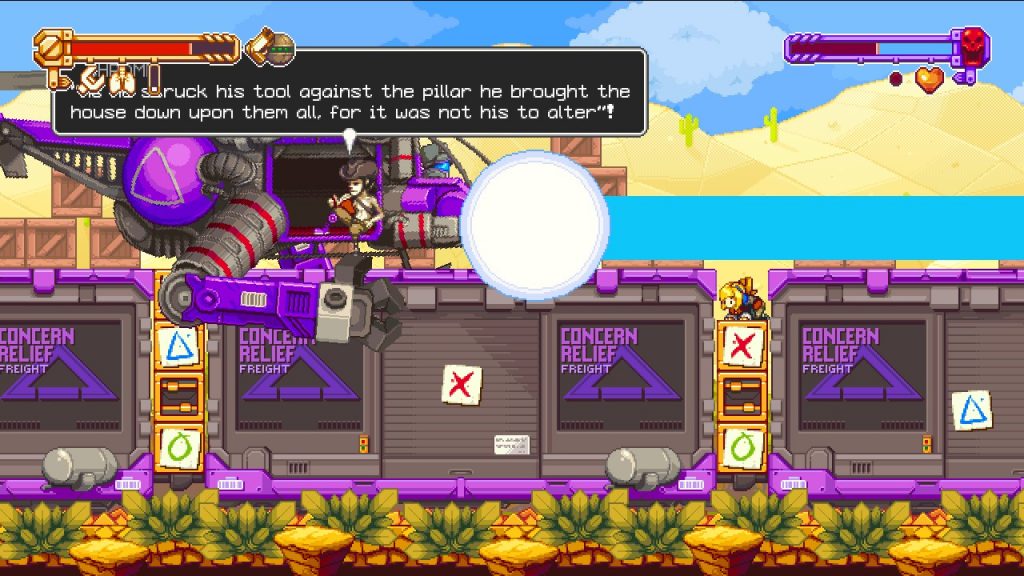 Aesthetically, the game works quite well. The music is wonderful, the world is interesting, if a little confusing at times, and enemy designs are varied and numerous. The writing, on the other hand, is a little heavy handed, and I’ve found it, at times, a little difficult to precisely work out what’s going on. Okay, pirates. Who are ancestor worshippers and use seeds, which is apparently heretical. Nearly everyone seems to be going through some form of survivor stress, with abandonment and safety being prime concerns (Presumably because this safety is provably rather hard to keep, even if you follow the techno-theocracy’s rules, and because people keep dying or being kidnapped), and it can sometimes be hard to keep up. The techno-theocrats have pseudo-magic powers, presumably through this Ivory stuff, which may or may not be nanomachines, son?

It’s a bit confusing. Does this necessarily make it bad? Well… Not really. It doesn’t make it great, or possibly even that good, but the movement is fluid, the combat moves mostly responsive, and being able to move (or charge your wrench, when the time is right) while charging up gun attacks is a nice move that makes things a little easier. The physics are pretty dependable, and that’s a good thing, because some of the puzzles really do depend on object physics to get by. 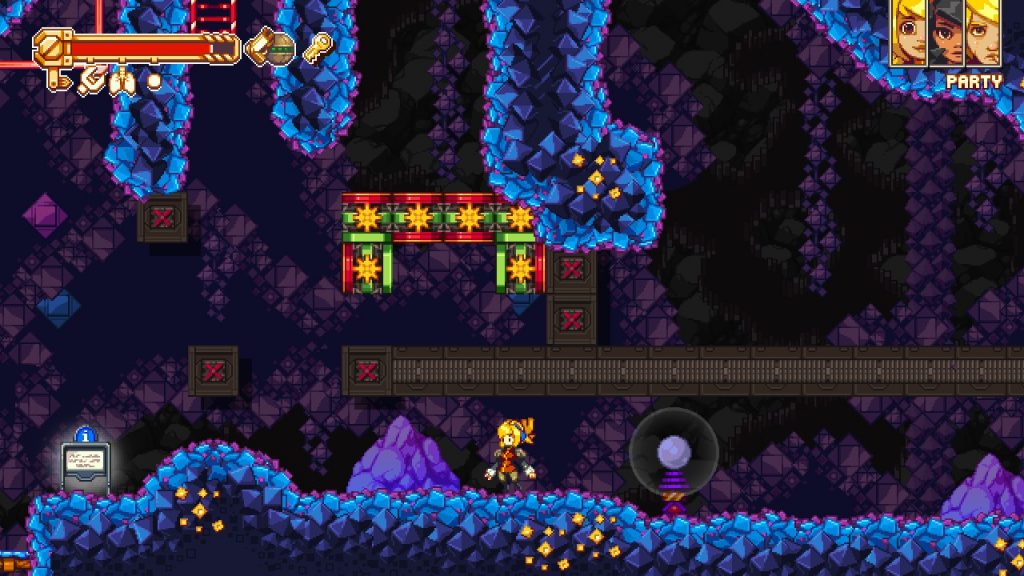 Explained: That ‘sploding the red parts push the box in the opposite direction. Demo’d: That the seeming background blocks stop its movement. Not quite explained: To use your charged shot here, you have to be at least a certain distance *away* from that rightmost pad. Otherwise it clinks off harmlessly.

As to how it feels to play? Well, sometimes, it’s good. Oh hey, a new area. A cool new ability (sparsely handed out in the first two thirds of the game.) A new character. This area’s pretty straightforward. Other times… Well, the frustration kicks in. I’m sure, eventually, I’ll finish Iconoclasts. I’m sure, eventually, I’ll get the point. But it’s not a game I’m playing in more than little bursts, and I’m probably not alone there.

The Mad Welshman wants to clarify that this is an okay game. The frustration balances out the joy of working out how the heck ass gets kicked.