Source: Free-To-Play (Tables come from Pinball FX2, mostly)
Price: Free (Tables are DLC ranging from £1.99 to £7.99 packs, 1 table (Sorcerer’s Lair) included, with option to trial play tables)
Where To Get It: Steam

It’s nice when I get to say something has improved. Even if it’s basically a new lick-of-paint, some community features, and quality of life improvements, it’s still nice. And so it is with Pinball FX 3, by Zen Studios, a free to play pinball game with tables-as-DLC. Let’s get into that. 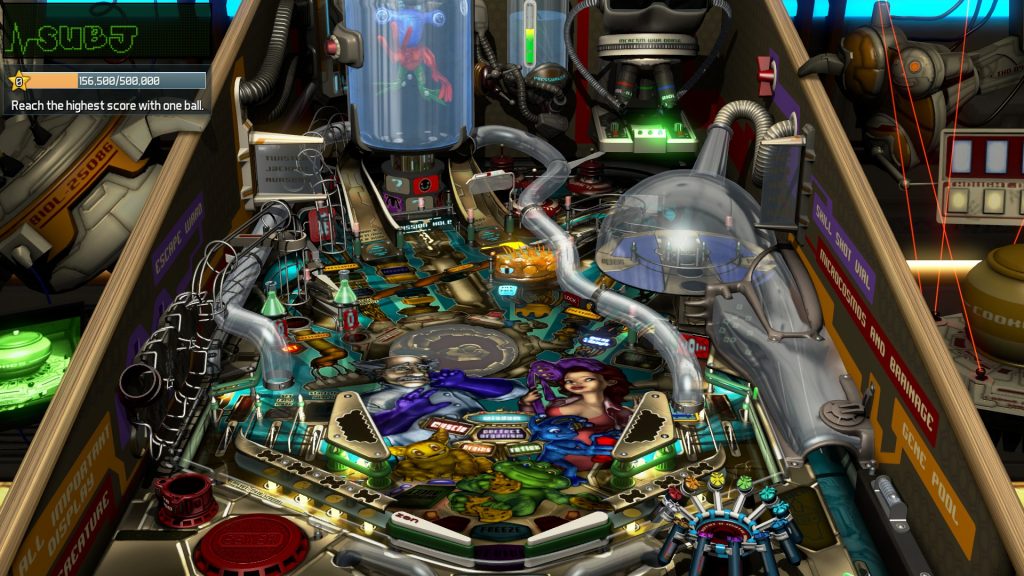 Pinball games, thankfully, are somewhat simple in terms of basics, so let’s sum this up quickly: The shift keys control the paddles (Left side paddles on left shift, Right side on right shift… A scaled down version of how pinball machines’ paddle buttons are generally placed on either side of the cabinet), Space tilts the table (Used sparingly, firstly because it’s rarely needed, and secondly because pinball machines don’t like it when you tilt them, punishing someone trying to cheat by lifting the table with a loss of control, and consequently… The ball), and Enter starts the game or, held down and released, launches the ball. Bam. There’s also camera and powerup controls, but those are either not used so often, or are clearly shown when you have a powerup unlocked and usable.

No, the real joy is in how the tables of the Pinball FX series play with the basic rules of pinball. The special modes in the Marvel: Infinity Gauntlet table (Yes, based on one of the many times cosmic gems and Thanos co-incided) can change the camera, elements of the table… Even the basic rule that shift flips the flippers, rather than holding them down, is exploited in the Mind Gem mission. In the Aliens table, the game will, at certain points, flip to a game you wouldn’t possibly have on a real pinball table, a segment where you’re piloting the APC down a corridor, dodging debris by shifting left or right with the paddles. Even some of the earlier tables have their own, separate mini-tables for certain minigames, and each table has its own twists. Epic Quest, for example, has a combat system, an XP bar, and spellcasting. Yes, on a pinball table. No, I’m not messing with you. Right ramp for Sword, middle left ramp for shield, smash bumper for smashing, and you get XP for completing quests and beating up monsters. 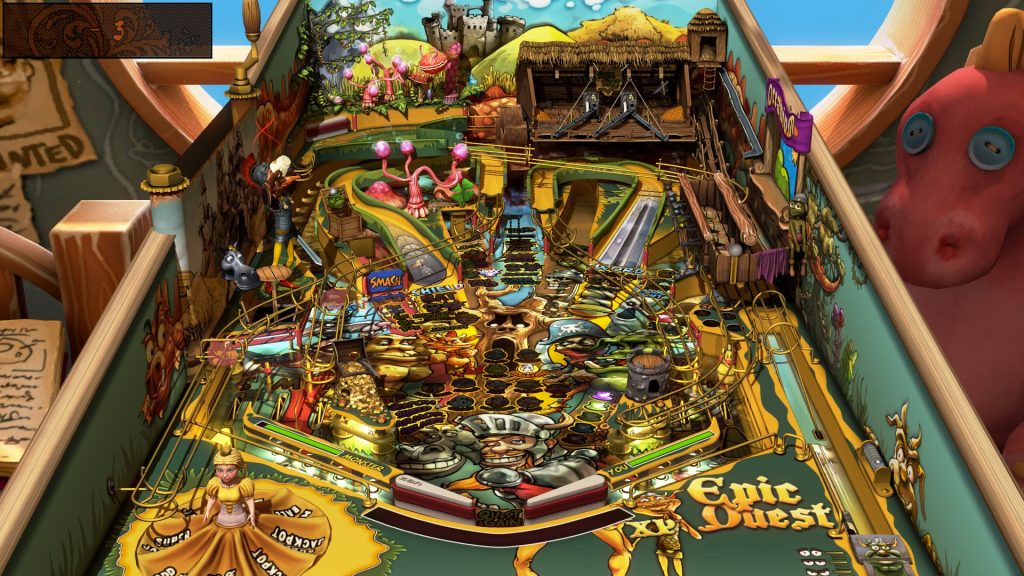 See? The, er… XP and HP bars are a little hard to pay attention to, however, seeing as they’re *below* the flippers, and you’re generally paying attention *above* them.

So, let’s talk about upsides and downsides. Firstly, if you did not have Pinball FX2, it’s no longer available for sale, nor are the tables that were licensed to it, and it alone (A list is available here). There is, at base, only one table available for free (Sorcerer’s Lair), but the table sets are, for the most part, reasonably priced at between £1.99 for some individual tables, and £7.99 for the Bethesda 4 table pack (With most at £6.99 for three tables, and bundle options.) Due to the updated visuals on tables, the game has higher system requirements, and is not quite as accessible as FX2, specwise. New tables have already been licensed, such as in the Universal Classics pack (consisting of ET, Jaws, and Back to the Future.) A downside is that the high-score table seems reluctant to share with me some friends’ scores, counterbalanced by an, overall, friendlier UI.

Finally, there are community improvements, powerups, and challenges. Tournaments, for example, are easier to see, and there’s a “matchup” mode where you can play multiple tables to try and get the top spots each month (Alas, the tables chosen aren’t guaranteed to be ones you own, and yes, this is a subtle way of trying to get you to buy tables, along with the Wizard Score, partly based on the number of tables you’ve played. I’m not going to begrudge this considering that the game is microtransaction free, honestly.) Similarly, tables now have different ways to play them, such as the three challenge modes (1 ball mode, 5-minute mode, and Survival mode, where you have a minute to reach an ever increasing score level, the clock resetting each time you get the score up to the maximum of 15) and powerups. Unlocked partly by playing the table normally, and partly by completing the challenge modes to a certain level, these add a bit of variety and score to your game, such as more score when hitting bumpers, or the ability to rewind time a certain number of seconds, improved by use. 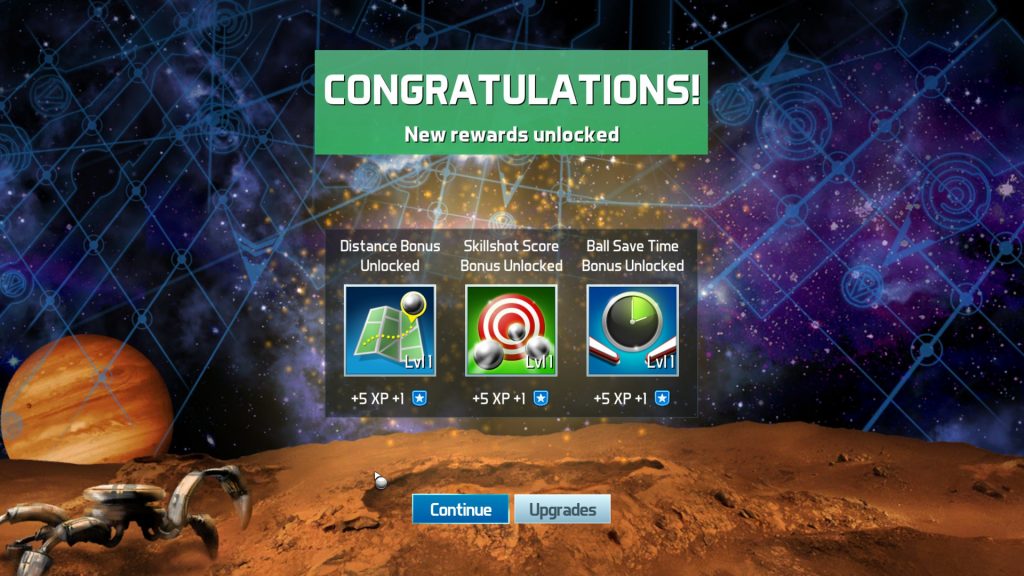 Two modifiers and one powerup can be chosen per table, although modifiers level up just by… Well, going farther, or hitting more bumpers, for example!

How does it feel? Well, there’s quite a variety to the tables, so the feel varies quite a bit. Weakest in my opinion is V12, a table with a high emphasis on edge ramps and a limited lower play field, and have had the most fun with the Aliens, Sorcerer’s Lair, Epic Quest and Mars tables, but I’ve sunk a fair amount of playtime into the game, feel like I can ignore the tables whose properties I don’t particularly care about and still have a good time (Sorry, Balls of Glory pack, I don’t particularly want to remember that time where Family Guy was shit, or, y’know… Family Guy in general), and the tables are reasonably priced in reasonable packs. The tables have easily accessible guides as to how they work, and trial plays so you know roughly what you’re in for before (IE – before you say if) you buy, so… Yeah, I quite like it!

The Mad Welshman likes a bit of pin-of-the-ball. It reminds him of ye olde days of cabinette arcades.