Source: Cashmoneys
Price: £18.99
Where To Get It: Steam
Other Reviews: Release

Six Degrees of Freedom. Ahhhh, I remember well when that phrase was marketing magic. Wait, a first person shooter where you have complete freedom of movement? Sign me the hell up! 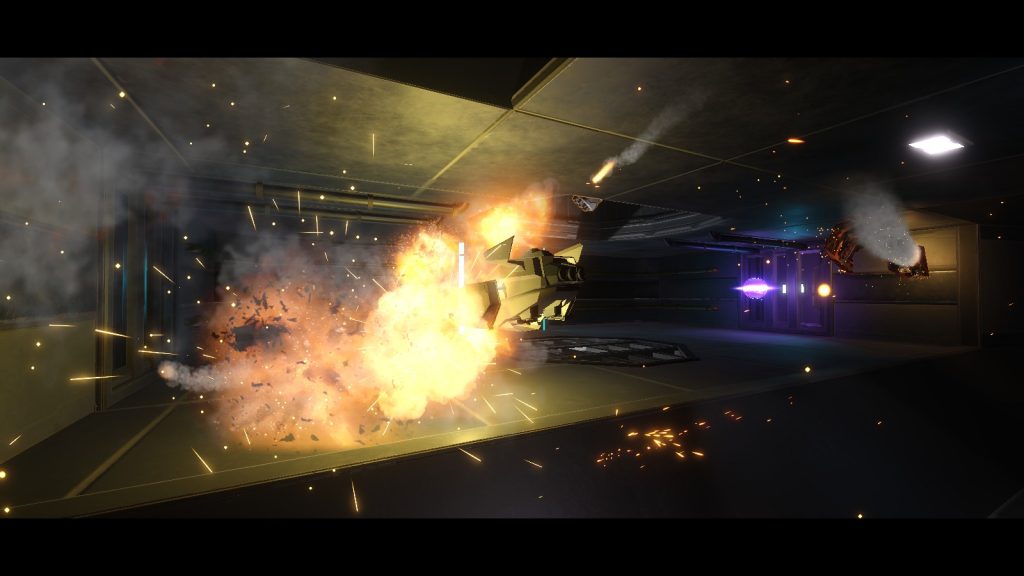 Wait, no, I didn’t sign up for thiiiiii- BOOM.

While OVERLOAD is certainly not the first game to attempt a revival of this particular genre of first person shooter, where you pilot a spaceship, destroying robots gone bad, OVERLOAD hits me squarely in the nostalgia glands because not only is it headed by the original Descent developers, Mike Kulas and Matt Toschlog (Not to mention various folks who worked on other Descent games in the original series, and the original CD soundtrack composer, Allister Brimble), it’s very clear they’ve refined their formula over the years.

When OVERLOAD eventually leaves Early Access, it will have 15 story missions, several challenge maps, and, of course, a variety of murderous robots to destroy, guilt free. The story missions follow the same rough formula as the game it’s a spiritual successor to, where you enter a base of some description, attempt to hunt down a generator, blow the hell out of it, and escape. Meanwhile, there are secrets, monster closets, upgrades… It is, in a sense, a very traditional game. 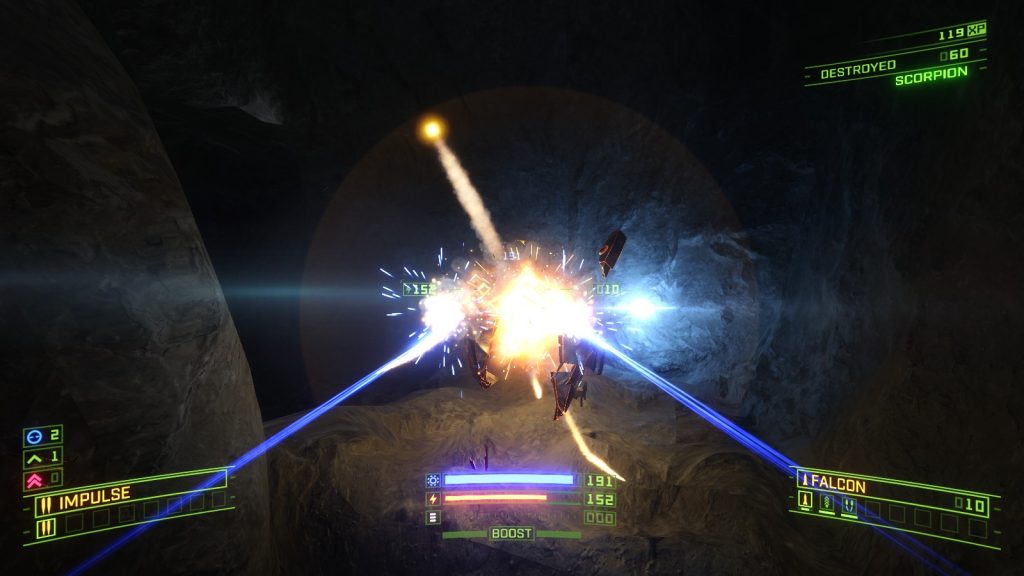 While the game definitely has its dark areas, a combination of the flare, your shots, and the explosions of deadly robots will light your way.

But here’s the thing: It doesn’t feel traditional. It feels very modern indeed, and at least part of this comes from, as mentioned, this obvious, yet hard to pin down refinement. Levels aren’t quite as claustrophobic as in the original Descent games, and so far, I’ve had very little trouble familiarising myself with the levels, the controls remain simple, but fluid, and the difficulty seems pretty balanced so far. So far, so appealing to the first person shooter crowd, and this seems unlikely to drastically change, considering the polish shown so far.

I will, however, freely admit to a minor bias here, due to the developers actively tickling that nostalgia in small, but noticeable ways. Example: While playing the first Challenge map (Essentially, survival against endless waves of deadly robots, escalating in difficulty as you go), something was grabbing me, something above the dark, yet somehow quite clear visuals, and the sound design, which, even through the chaos, will occasionally give you something memorable (Some of the more melee/explosive based robots seem to growl and, occasionally, scream at you, while still sounding like… Well, like robots. It’s quite disturbing!)

“Wait… Is that… Is that the original Descent theme, remixed?” 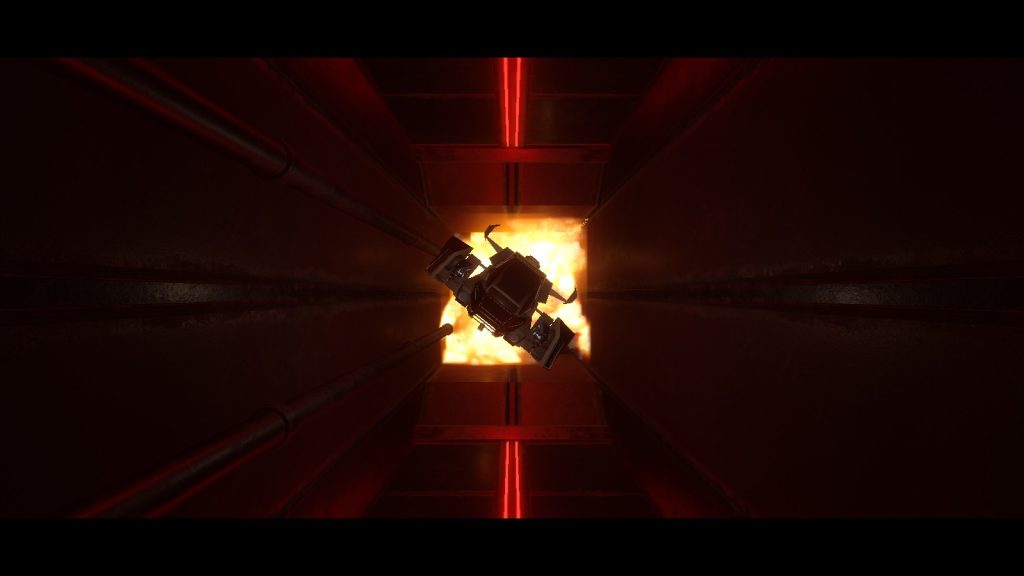 In single player missions, once the reactor has been destroyed, and providing you find the exit, you get to feel pretty damn badass. Just like you might have in 1994

Immediately closing the game, I hunt around, and lo and behold… It was. Darker. Nastier. While still retaining enough of the motifs that gripped me while I was young (and having nightmares about four clawed robots, being interrogated by violent tiger aliens, and skeletons with rocket launcher shoulderpads, as well as the more usual Daleks and Critters.)

In summary, it’s Descent, but for the modern generation. It’s not the only one by a long shot, but so far, it’s the one that’s coming out ahead in my mind as the best spiritual successor, and a nice confirmation that sometimes, the original developers retain the Good Ideas they had in their younger days. It seems fairly accessible, but if you’re on the fence, there is a free demo, and that, at the very least, is well worth a go. 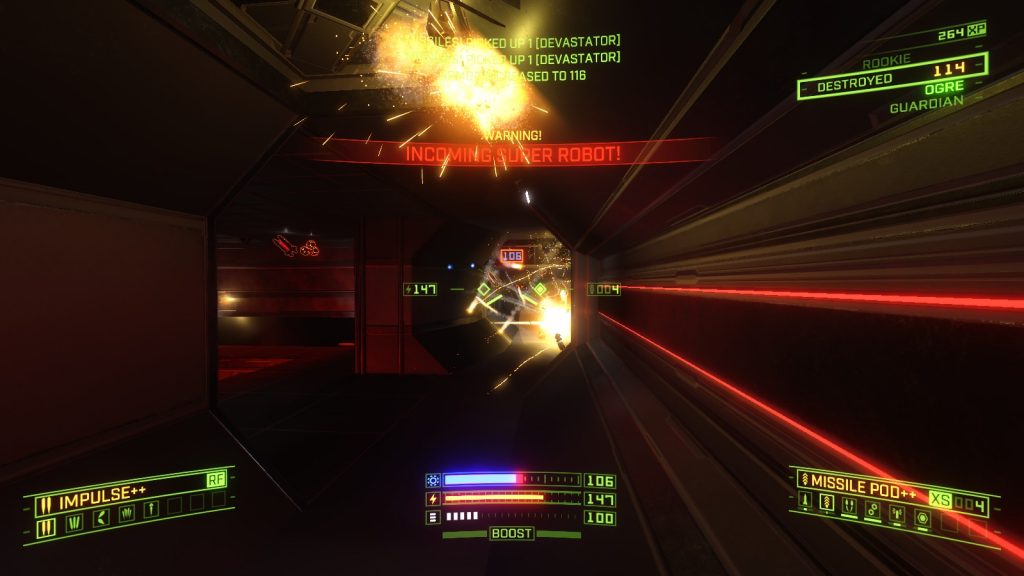 The game, whether in single player or Challenge mode, can get a little busy, what with all those chunks, explosions, and pews going on…

The Mad Welshman is well aware that medical science poo-poohs the idea of the nostalgia gland. But it exists, oh yessss, it exists…