There is, on the face of it, not a lot in Slime Rancher. You would think this was maybe a bad thing. But cute slimes, exploration, and expanding seems, honestly, to go a long way. And Slime Rancher is one of those games where a somewhat humdrum early start… Opens up. 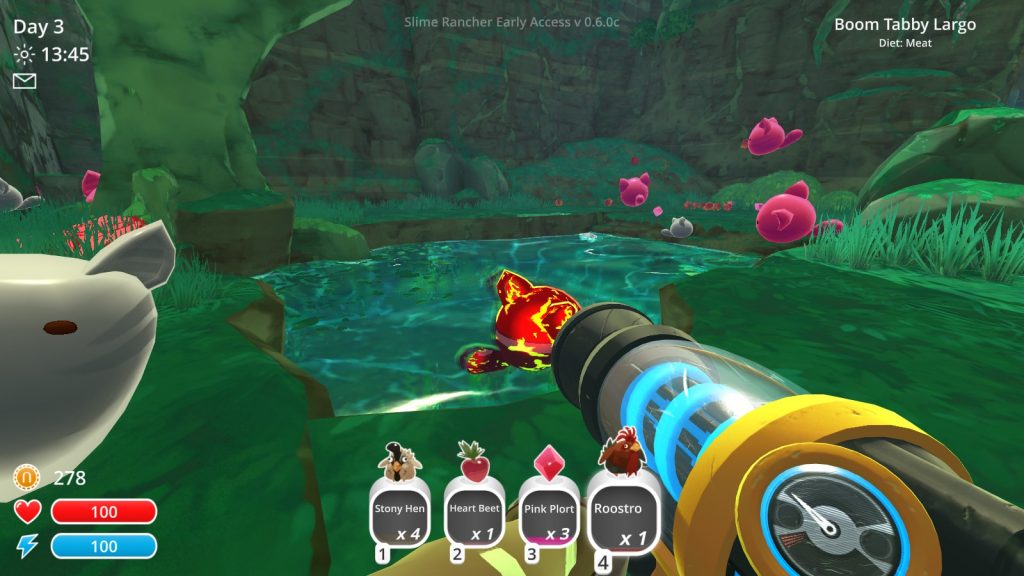 Ah, look at all these slimes, frolicking together in a pool. Better leave before one of them becomes a Tarr… 🙁

Considering the start, however, I certainly wouldn’t blame you, as, at the very beginning of the game, there doesn’t appear to be a whole lot to do. You encounter four slime types (Plus their Largo variations, and a few massive Slimes), can capture three, and once captured, it’s feed, collect, rinse, repeat. Pink Slimes, being the most common, rapidly drop off in value, so until you get some cat and rock slimes, you’re in a rather grindy situation. And, funnily enough, many of the options for cages, farms, and the like is to reduce that grind. Higher walls so you don’t have to keep an eye on the slimes so often. Music boxes so they don’t try to escape so much. Auto collectors and auto feeders (the latter reducing feeding.)

It’s an interesting comment on the game, really, that I’ve started to have real fun with the game once the farming aspect is toned down somewhat. Because then, I’ve been able to experiment with mixing slimes, fighting Tarr (the dread result of Slimes mixing and matching themselves too much, and common in any area where there are three or more slime types co-existing… until they eat all the other slimes, then starve, anyway), unlocking Slime Gates to new areas, and encountering new and even more interesting slime types, from Gold Slimes (can’t be caught, run away, but can be fed for GOLD PLORTS) to Boom Slimes (The clue as to why they’re dangerous, friends, is in the name.) 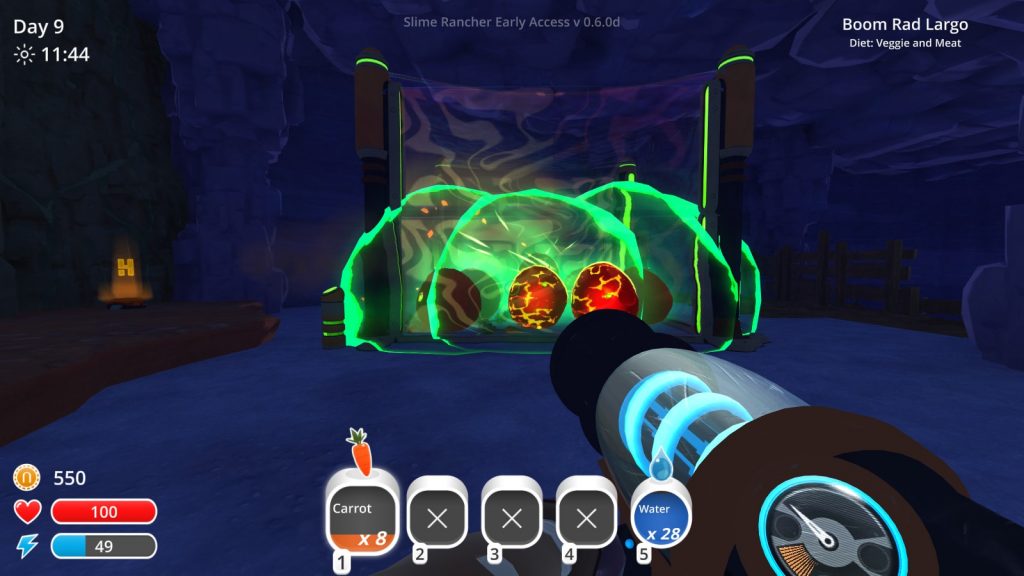 Some slimes are extremely dangerous to keep. Just for giggles, I’ve mixed two of the more dangerous varieties, just to add a bit of spice to it all…

This, in a way, is why the game definitely isn’t for everyone. “Omigod, how cute!” gives way to “Grumble mutter feeding time is it you sneaky gits?” gives way to “Hrm, I wonder which of these huuuuge slimes unlocks the way to an area where the Big Money is so I can get this Lab thing?” , and progress is gated behind… Well, exploring and trying things. Feeding Gordo Slimes to get Slime Keys to reach new areas. Earning enough money to open up the Ranch and its features. Getting a jetpack, and extra energy. And, finally at the present version, unlocking the Lab so you can build stuff, open those Treasure Pods that have been annoying you all this time, and capture rare and huge slimes.

Is it cute? Oh gods yes. But whether you enjoy it or not really depends on how far exploration, finding snippets of world lore and conversations that don’t necessarily make sense at first, and the cycle of feeding slimes, collecting their diamond shaped poop, and selling it in order to find better slimes with better poop will take you. For me, it works well in small to medium bursts. But I won’t pretend I don’t hope to see something that will keep me going once I’ve found everything. 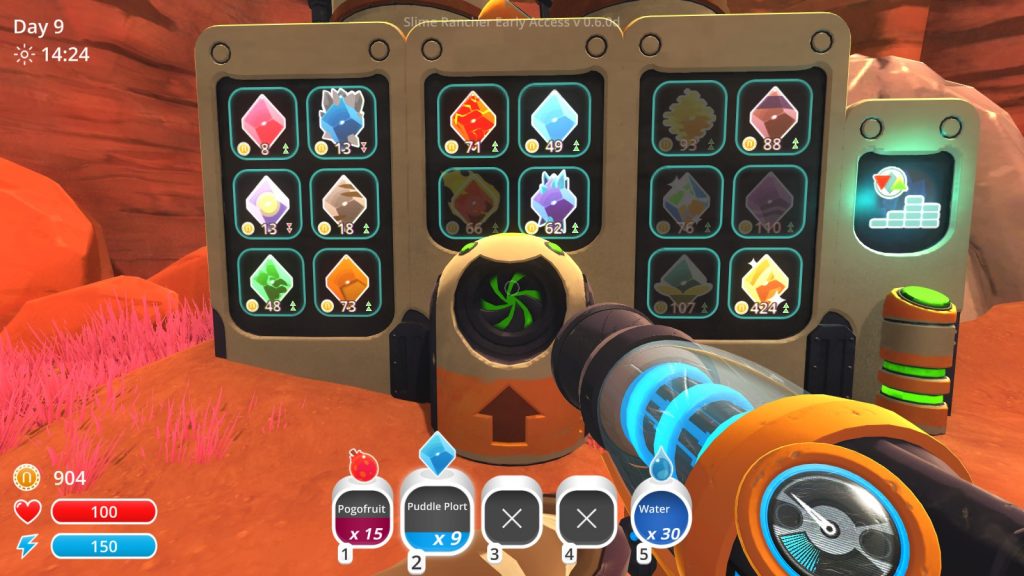 Still some slimes to collect. C’mon, Beatrix, we can do it, and please Harry and the others too!

Yes, The Mad Welshman is somewhat conflicted about Slime Rancher. As noted, cute slimes go a long way… But not all the way.