On Games Journalism – What A Presskit Actually *Is*

So, quite recently, thanks to the “Games journos are all bribed” crowd and some games journos who drew attention to the arguments (Which are by no means new), I was reminded there was a hole in my “On Games Journalism” series (I mean, there’s a few holes, but I plug them as I go along.) Specifically, talking about Press Kits, what forms they take, and how a respectable games writer deals with them.

Speaks for itself, really.

So, let’s begin with the absolute basic form: The PR mail. Almost invariably, any mail trying to get you interested in a PR key is going to have basic info on what’s going on, sometimes with florid language, sometimes not. This one, for Endless Space 2 (already on my docket) is an about average example. Hey, this thing is going on, here’s a youtube link, interested in a key to review it?

If the answer is yes, and you are on the list of “Folks who’re approved for keys”, then you get a steam key. Y’know, a thing you’d need to review the game. So far, so very not bribe, because you are now pretty much committed to reviewing that product, regardless of its quality (or lack thereof), and not doing so will result in an unseen black mark against you. Enough of those, and you are, at best, greylisted (Your emails are not answered, leaving the question open as to whether you’re blacklisted, which is outright told “Nope, if you want to review our products, do it out of your own pocket.”) Yeah, sure, the game could be good, but if you knew it was good beforehand, then you’re a psychic. Many’s the time I thought something looked interesting and cool, and then… NOPE.

But anyway, that’s your most basic level. Then, you have the most common form of Press Kit: The information pack. Sometimes, these physically get mailed to you, with a page of A4, maybe a steelbox, or one of those many ubiquitous “USB keys shaped to look like a thing.” More often, they’re a ZIP file with some screenshots, an info PDF, and it’s usually filled with advertising blurb.

This is what an actual press kit looks like, 60% of the time. Another 20-25% of the time, it’ll be the screenshots folder and logo.

If you think a USB Dongle shaped like a car key is a bribe, I really can’t help you. For an idea of what a PR fact sheet looks like, here’s the fact sheet for Colt Express, a game that isn’t on my docket, but I got a PR mail for. 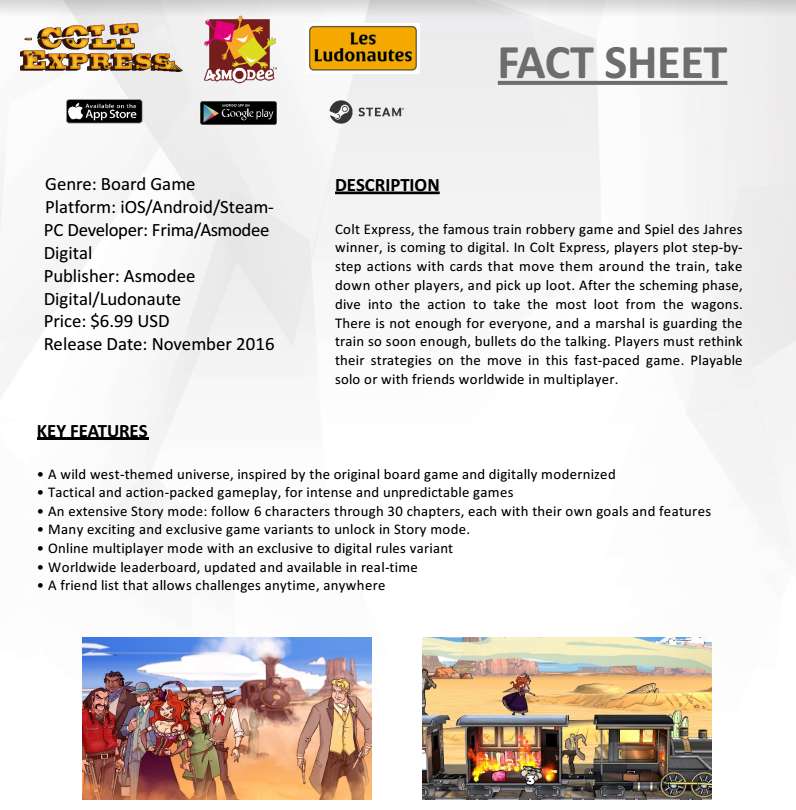 Yes, I can see myself being bribed by this. No, re- Of course not really, it’s info for convenience of access. 😛

This is the unromantic, very un-bribe like reality of 95% of press kits. This, ladies, gentlefolk, and folk of nonbinary genders, is all that most reviewers will ever see. So how do reviewers deal with them? Well, it depends how informative they are. A presskit like this will most often be ignored in favour of actually playing the game. Y’know, how a good reviewer will ignore the trailers, except as a point of reference, and instead write their review based on playing the game.

At this level, which is the level most people will encounter when games writing, there’s really not a lot of reaction or thought needed. So let’s talk about bigger press packages. Let’s try the Bloodborne press kit (Youtube link), shall w-

Oh. It’s basically a shinier factsheet with a silly CD case, a notebook, and a small artbook. Yay. These are decidedly uncommon, with only the bigger companies even bothering to send them out. And I’ll let you in on a little secret…

Most games writers who’ve been in the biz for more than six months are slightly embarassed by these things. I mean, that satchel thing’s vaguely useful, the artbook’s kinda nice, but that book CD case? Worse than useless. That notebook? Yeah, I [eyes A4 notepad and, y’know, his computer, which he is writing this from] don’t really see it seeing much use. Of course, there’s bigger tat out there, but, as much as I hate to piss on the poor sods who worked very hard to put on a show? It’s tat. Most of this gets thrown out, and you can tell a reputable games outlet by the fact that they don’t let you sell this stuff either.

So… Let’s kick it up a notch. Let’s talk about the kind of swag you will see handed out if you get a press pass to an expo or con. No, really, this shit’s handed out like god-damn candy. The reality of it is… Somewhat disappointing. 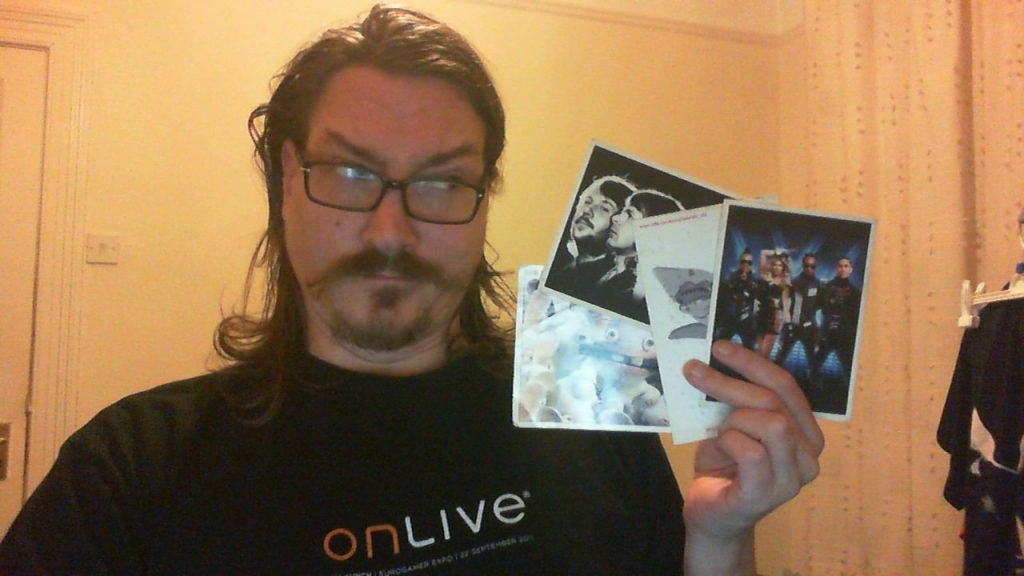 Actual “swag” I have received. T-Shirts. Postcards. Candy (Not pictured because candy, it’s eaten already!)
…Guess how many of these things I even covered, let alone was nice about? (Answer: Not a fucking one)

This is the reality of it. You will get handed postcards. Small to medium, easily ripped bags. If they’re really splashing out, you will get T-Shirts. And nearly everything except the T-Shirts… Just look pretty. The T-Shirts are the most expensive part of this “Con swag”, and a T-Shirt… Comes to around £15. Which, you’ll notice, is below the absolute low end of what I consider “significant enough to declare.” It should also be worth noting that I got an Id T-shirt at the same expo, and you can already see how that came out (The bit about Rage.)

Y’know what I consider more important? These… 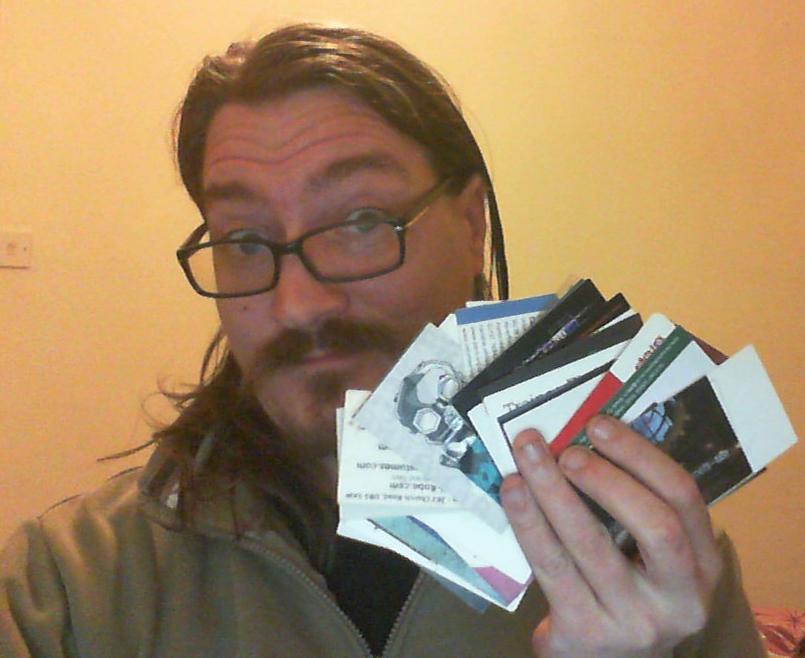 …THESE actually have a POINT.

These are contact cards. Some of these people aren’t in the biz anymore. Some I’d have to rehunt the address for. But these are the real swag. Because the more of these you have, these small contact cards, the more your options open up for who to talk to. Not just developers, but lawyers who work with games stuff, reps for engine developers like Unity. Heck, somewhere in here is the card of the director of BAFTA Wales (Although I highly doubt they’d appreciate me mailing them out of the blue without a good reason.) That’s what’s important at these cons and expos.

But still, sometimes, once in a blue moon, you get big stuff. Being but a humble independent, I’ve never even seen one of these up close. Little statues. Sometimes not so little things. And the weird thing is, most of us are embarassed by this stuff too. Any reputable outlet doesn’t allow resale of such things… They are, again, of no practical use, and a lot of the time? They’re not as hot as people like to think they are. And again, they have no real effect on whether the game’s any good. A good writer is laser focused on the product, and honestly, most of us really wish big developers would save their money and spend it on, Oh, I don’t know, maybe paying the coders better and better coding conditions so we don’t have any of the frankly disastrous Day Ones we’ve had this past two years alone? Because I can say, from experience, that the smaller studios tend not to have those.

In the vast majority of cases, how to deal with Press Kits is, er… To focus on the game rather than the shinies. The vast majority of press kits aren’t useful for anything except quick reference and a lazy source of screenshots (Most games writers prefer to take their own), and the minority with swag are, quite honestly, embarassing, impractical, and our ethical options for them are 1) Throw them in the bin or 2) have them clutter up the bloody place. I can’t show you any of those “USB keys shaped like other things” because they’ve either gotten lost, or been thrown in the bin, or both. I definitely can’t show you any statues, or serious swag beyond T-Shirts (and damn few of them at that), because most folks don’t actually get that shit.

I leave you with a simple comment that spells out my opinion on “swag” , from my twitter feed.

EDIT: Another, calmer perspective comes from fellow games journalist Nick Cappozzoli, who points out that another, better way of looking at the situation would be to consider the “Tchotckes” (another nickname for this kind of thing) as inherently tainted… Since he’s worded it better than I, I’ll just let this speak for itself also.