So, less than a week after the endorsement by Id software and nomination of fan Total Conversion Brutal Doom 64, Zenimax media, owners of Bethesda, Id, and thus the Doom license, decided to capitalise on that goodwill, by…

…Oh, wait, did I say capitalise? I meant fritter away. Because they decided to send a takedown notice to Kornel Kielewicz, creator of a little game from 2002 called… Doom: The Roguelike. 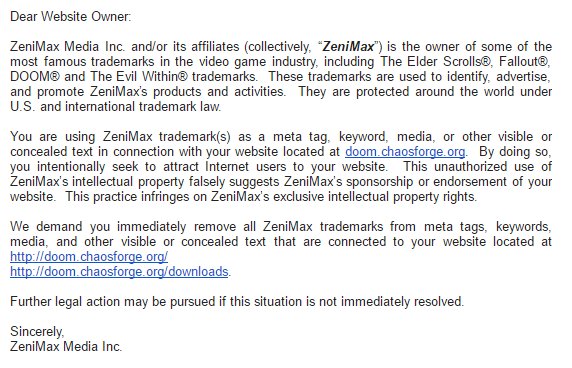 Legally, fair. But that’s about it.

So, for context, Doom 3 was released in 2004. It was basically a sparkle in the Id team’s baby blues at that point. Doom 2 was released in 1994, and is what Brutal Doom 64 will eventually be using, to my knowledge. Doom 1, the game Doom: The Roguelike is based on, was released in 1993. And DOOM, the Bethesda/Id partnership, has been wowing a lot of folks this year by being a Good Game.

So, let’s start with the legal. Honestly, even if the game had previously been endorsed, or at least tacitly ignored by Id, Zenimax are within their rights to do this. I’m sure they believe they’re setting a precedent, protecting their IP…

…But PR wise? Lot of us game journos enjoyed Doom: RL. Lot of players enjoyed DoomRL. And taking down what’s rather blatantly free, and not a threat of any actual substance to Zenimax Media’s publishing giant. Let’s face it, if lots of people shitting on Skyrim: Remastered, the original Skyrim, or Oblivion hasn’t fucked their sales over, I highly doubt a small roguelike homage or pastiche of a game published twenty odd sodding years earlier is going to be much of a threat. It also, despite the differences in case, feels like a betrayal after their subsidiaries’ PR victory in endorsing the Game Award nomination where their bigger competitor, Nintendo, had decided to screw the pooch by doing the same thing to fangames.

Keepin’ this short and sweet, the DMCA will probably go through, even with me screamin’ and yelling (And, indeed, the RTs, and condolences, and shit-talking that is being sent to Bethesda, the most public face of Zenimax Media) , and the site will most likely go down.

The game, on the other hand, is already being downloaded by fans, and I have no doubt that Zenimax Media will have lots of fun trying to enforce the public erasure of a fangame that was never a threat to them, and had very little to do with something they’d actually made themselves (Id, you did make Doom. But you’re obviously not calling the shots here, are you?)