Clockwork Empires is meant to be a survival management game (Like Dwarf Fortress, Rimworld, or the like, where orders are indirect and resource/building management is important) set in a lovecraftian, jingoistic steampunk world based on a satire of Victorian Britain. Unfortunately, not all of that satire on drudgery and misery is intentional. So… Let’s talk about housing. And cabinets. 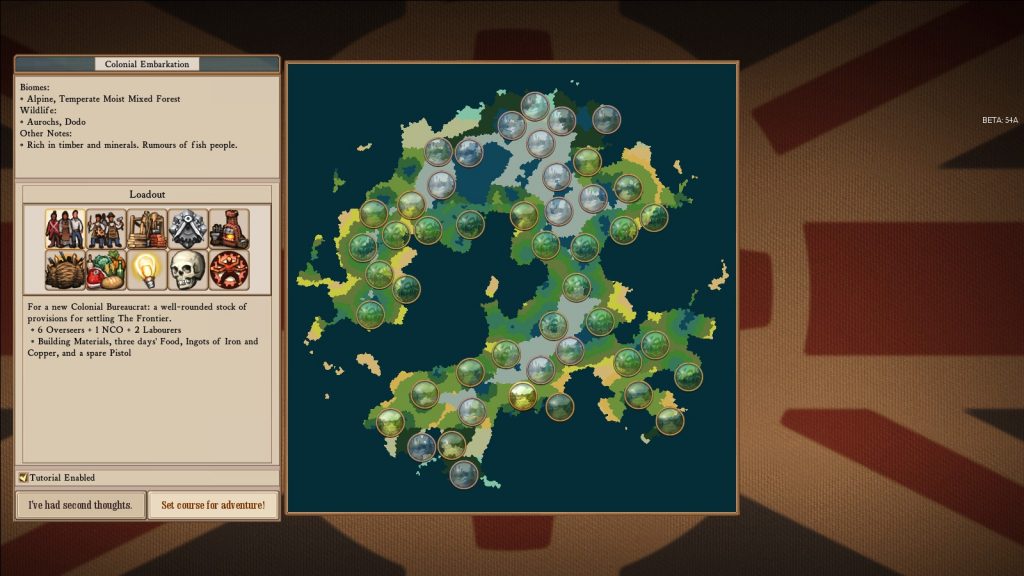 Mood is an important factor of Clockwork Empires, as happy labourers and overseers will work an extra shift, whereas despairing ones will slack off, and fearful or angry ones will be actively counterproductive. Obviously, this at least partly means housing them, and making that housing appealing. The workplace must also be prettified, or production will suffer.

There’s just one small problem with this, and the game doesn’t bother to inform you of it: Cabinet Tax. Let us assume, for a moment, that you have 2 labourers, and give them a 3×3 house with 2 windows, a door, and a bed. They aren’t happy with it, they aren’t unhappy with it… But you may have noticed the population count go up by 6. Because each of those houses can add population. So, when those labourers inevitably turn up, you build 6 more of these houses. And now you have many more labourers than you know what to do with, eating your food. Each building has a Quality Level, and this is, effectively, based on cabinets (and shrines for houses) in the early game. So, building individual housing? That’s… 12 cabinets to build to make them happy. The situation then becomes more clear when you turn to the workplace. Let’s use the carpenter as an example. You need a workstation (for cutting wood, making paper, etc), an assembly station (To build other workstations), and a décor station to build wood decorations. Y’know, like cabinets. But each of those workstations beyond the first reduces the Quality of a building, making workers unhappy. And when you try and build your first labourer housing more efficiently (7 beds, for the two workers you have, and the 5 you’ll eventually get.) you realise that this applies to houses too (For lo, the bed is a workstation as far as quality goes. I can understand why, few folks enjoy bunking long-term.) So your efficient solution still requires 12 cabinets for maximum happiness (6 for the extra beds, 6 for max Quality) 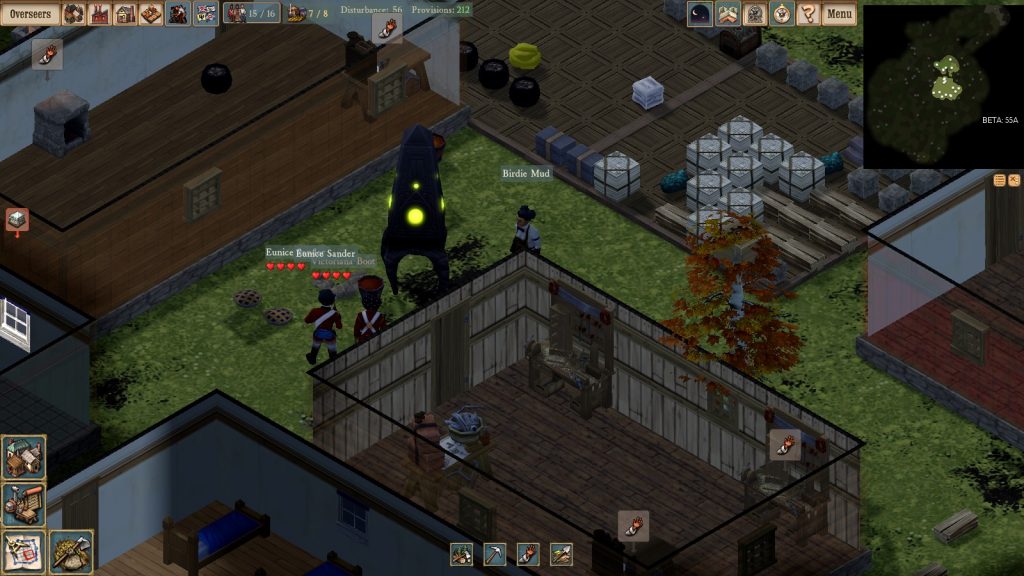 Not only have we a rare example of a nasty thing happening, you may note I don’t have enough cabinets.

So, for a good, efficient first labourer house, you’re looking at at least a 14 x 10 building (Space for beds, and space for at least two windows, and 12 cabinets/shrines. After that, it’s a little easier, as you’re only catering for 4 or 5 labourers at a time, but as it is, you have a minimum “happiness tax” on all your buildings of 1.5 logs x (Number of Workstations/Beds -1) , and, obviously, the extra time and labour to make them. And no, you can’t just make more work buildings of the same type to get around this, due to the Overseer system, limiting both your number of workshops, and the number of job types you can do at any one time. Labourers just allow for more of the same job type once assigned, or, in the case of single jobs like mining or farming, doing it quicker. And yes, individual farms count as a job.

The in-game help hints at some of this. Specifically, the overseer job limitation, the fact that mood is affected by decorations, and that houses have conditions (That you won’t know until you build them) on extra population counts. Gee, I hope you found some sand, or can trade for it, because otherwise you’re in big trouble later on!

…Or, of course, you could not know this, and play for several hours, and an in-game month, and watch as your labourers and overseers become less efficient, before you realise what’s going on. It’s not very intuitive, and it may take quite a while for you to realise how badly you’ve made mistakes. Considering that a month of in-game time took me something like 3 or 4 hours to play out, it’s the kind of unfriendliness that turns me off playing for the long periods of time the game obviously wants me to play. 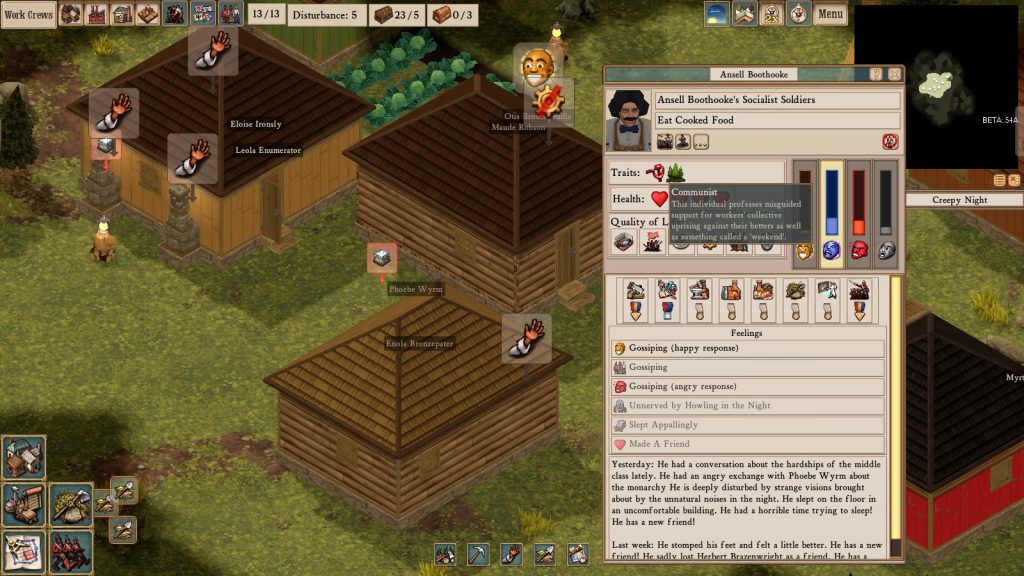 This is what happens when you don’t have enough cabi- No, not the communism, the *Despair* … Can’t blame communism on the means of production, friend!

And this is a damn shame, because the game is visually kind of nice, the music fits the mood very well, changing with events. Unfortunately, the game is best described as “plodding”, “unintuitive”, and “frustrating.” I can’t select things behind buildings, even with the walls visually turned off. If I want to know what kind of mine I can build on a survey point, and there’s anything in the way, well… Good fucking luck without clearing the obstruction, mate!

And eldritch things and events. Oh, how those make me sad. Just before release, I had played a full month, and, while some eldritch things did happen, such as an invasion of moon-balls, another of eldritch cuboids and polyhedrons, and at least seven or eight obviously occult things dug up, the one death was from… Bandits. And that was because I hadn’t switched to my better weaponry because I hadn’t properly understood that 1 set of stone pellets equalled about 100 rounds. Meanwhile, the entire time, said eldritch gewgaws, such as a canopic urn that was actually a klein bottle, sat happily vibrating or lurching awkwardly in spacetime in between the maize chowder, some planks, and some coal that had eventually been put there by my heavily depressed people. 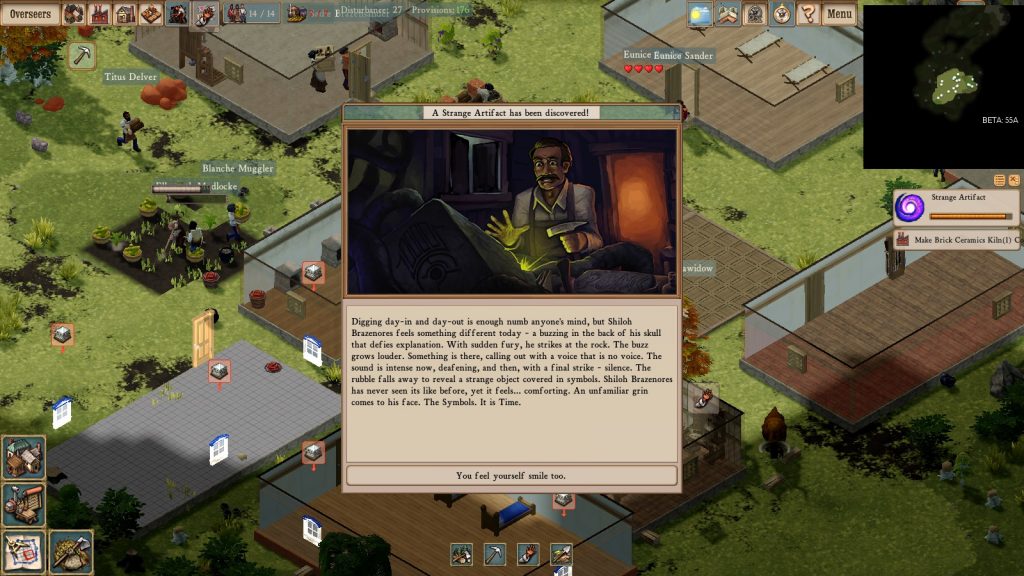 It’s such a shame that their normal reaction isn’t “Try and break it” or “Try and worship it”, but “Put it next to the paperwork.” On the one hand, very British. On the other, very little drama until *much* later on…

When the game goes well, it goes really well, and you can build up some serious cities in the limited space allotted to you, researching cool things, arming your soldiery with lightning guns (Leyden Weaponry) and clockwork armour, oppressing the fishy natives, and generally being the colonial asshole you may have dreamed you are. But to get there, you have to struggle with odd limitations, an AI that isn’t entirely sure if it’s coming or going, and a UI that makes the increased busywork from more colonists more and more a matter of hitting pause and checking things, slowing the game’s pace even when things begin to get interesting. And I’m really not certain I’m up to that.

The Mad Welshman liked his new Shining Trapezohedron. It set off the Crystal Egg, the Green Soapstone bookends of unknown providence, and the Eldritch Tomes he’d been collecting from the book club. Just another day…