Source: Cashmoneys
Price: £5.59
Where To Get It: Steam

Space, it seems, is similar to War, in that it’s longish periods of nothing happening, followed by moments of pants wetting terror. Also of not knowing who your friends really are. Both of these, it seems, tie in to Mars 2030, a game which has apparently hit full release. 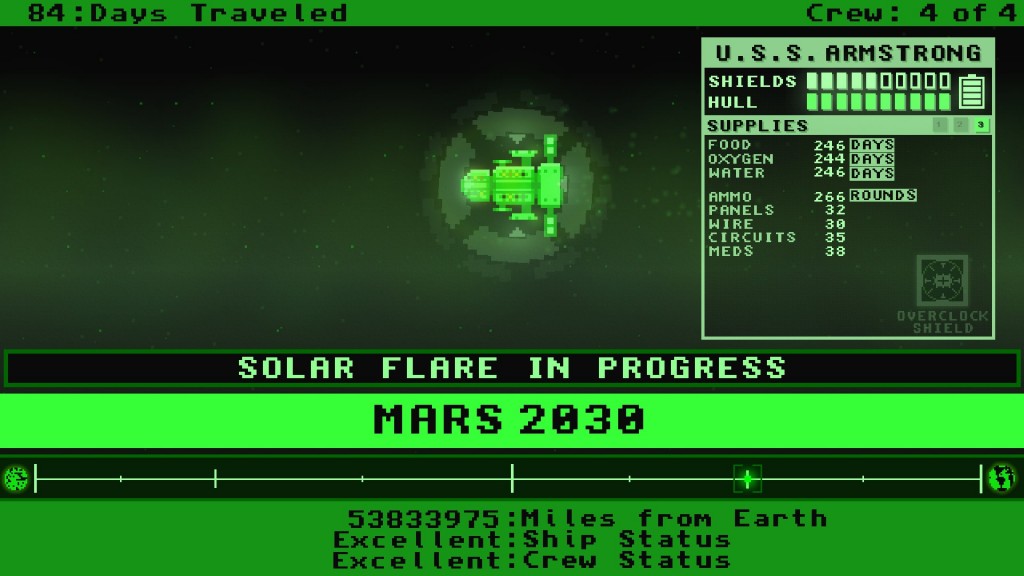 I will survive *this* Solar Flare. The next 9? Perhaps not.

I say “apparently” , because, honestly? It doesn’t feel quite finished. For the £5.59 you pay, you get a greenscreen styled Oregon Trail type game, in which you load up, try to travel to Mars, and get assailed along the way by various factors like asteroid belts, solar flares, medical problems, and… Computer virii. Which made me blink a bit. So far, so fine, and in fact, ignoring certain factors, it’s entertaining, in a relaxing, “Something I can play while I’m wanting to relax” sense.

There’s just one problem, or rather, a series of small problems making one bigger one: I can’t ignore those things. Not just because I’m a reviewer, and not mentioning these things would be bad, but because they have an impact on the game from the very start. By which I mean picking supplies, because this is, essentially, Oregon Trail… IN SPAAAAAACE!

You’re not actually told what you get for picking, say, “10” food. It’s certainly not 10 food. It’s definitely not just ten bits of ammo for your mass driver. And that’s a problem, because part of the fun of Oregon Trail type games is taking risks, or, more accurately, gauging risks. Beyond knowing that more than 10 food would appear to get me all the way there… I don’t actually know for certain. Likewise with, er… Everything I have. Meds, Food, and Ammo are fairly obvious, but Circuits, Panels, and Wires? Well, they’re possibly something to do with shields and system repairs, but it’s not very easy to tell. 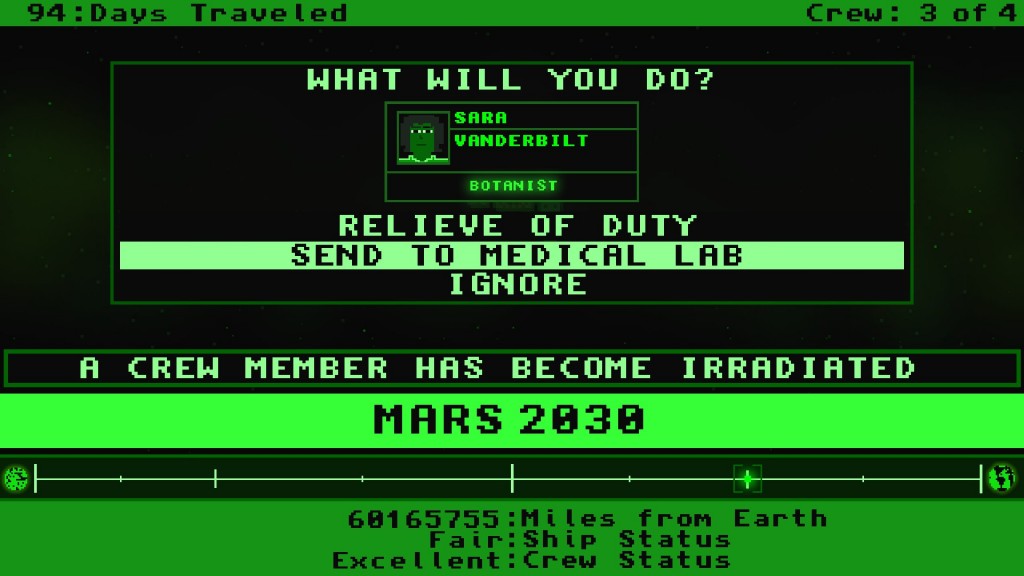 Just a week before release, this could happen to dead crew members. I *think* that’s fixed… But I can’t be *certain*…

Similarly with the crew. I know, from experimentation, that my Software Engineer is the only one who can fix virii, and my Hardware Engineer fixes the shields. My gunner, I’m assuming, does gun things. Sod knows what the fourth crew member does. And sod knows, from the overlays I have, who’s still around to do these things. Because it doesn’t tell you, anywhere I can see. And once someone’s seriously laid up in the medbay, say from radiation poisoning thanks to Solar Flares, they don’t do their job any more. Which I also don’t know, because the game doesn’t tell me.

I don’t know what a virus in the Auto-Nav actually does. Or the Disposal System. And sadly, I suspect the answer to both is “Nothing.” But the fact I’m not being told these things, things the game presumably knows, is a massive black mark against it, especially since I know the developers have been informed. I would, I was one of the people who told them.

And then there’s the little things. Little things, but telling things: The “Repair” button sometimes blanks out just after I get the window back to do the thing, and also just after I’ve re-opened the ship status window because being told I had a thing to do, for some reason, closes the window. It’s pretty easy to pin down why it’s happening: Because you can’t do anything while the crew are having an event, or just before, and the game, just after giving you a thing to do, then checks to see if anything else happens, stopping you from doing the repair while it checks if something’s going to make your day more complicated. And that one little thing, combined with the other little thing, makes for frustration in an otherwise relaxing game. 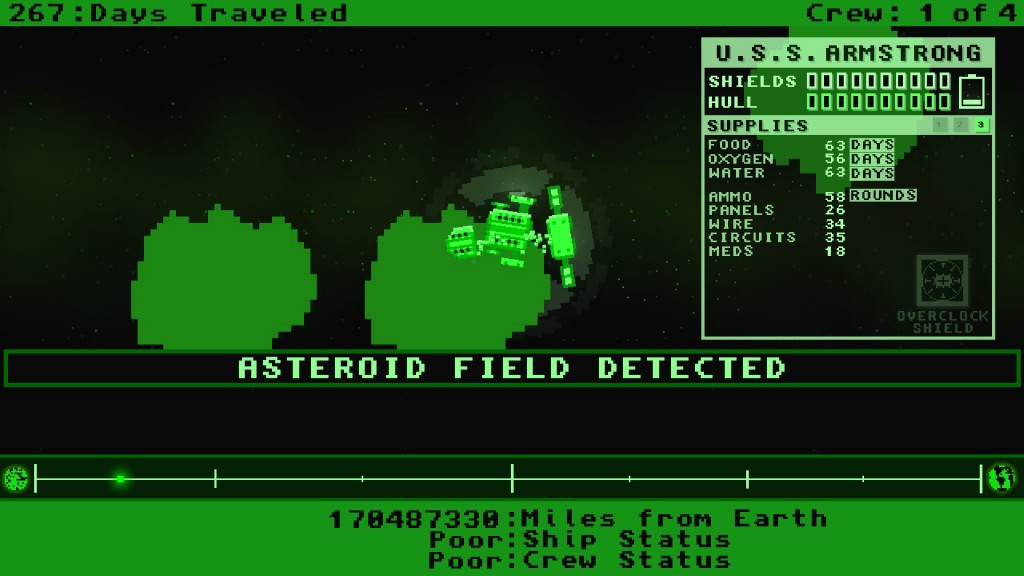 A bone headed death, and my fault. Not all of them will be.

Oh, there’s also a lackluster minigame you can play, in which a defense satellite goes up and down, and you have to time your shots to defeat never ending waves of enemies. Whoop.

So, despite it having some nice ideas, some nice visuals that are inspired by, but by no means replicating the 8-bit greenscreen of my youth (Too smooth in places, too small in others), and the same with the visuals, I really can’t recommend this, because it claims to be finished, and feels like a beta still, with bad tutorialising, and promises that seem a bit empty about “crew status” being the next feature… Which is baffling when you consider this “Big feature” is literally adding a segment to the ship status UI, and using that same code to, er… Print some variables. Which… Somehow hasn’t been done in two months. There may be crew members still “with[out] activated game content”, and I don’t, neither as player or reviewer, know. I’m informed, just as I was informed a while back, that support will continue through 2016 for the game, but as release states go, this isn’t great.

The Mad Welshman looked up at the bright eyed, bushy tailed astronaut candidate. “Space Walker? So… No software, no gunnery, no hardware? YOU’RE HIRED.” He grinned, as another useless waste of human resources was sent into space.