Source: Free
Where To Get It: Steam

Let’s begin this review with the most important facts of all: Mandagon is free. It takes, on average, less than an hour to play. Also, it is meant to represent Bardo, which is described as “Limbo” in the game’s description. 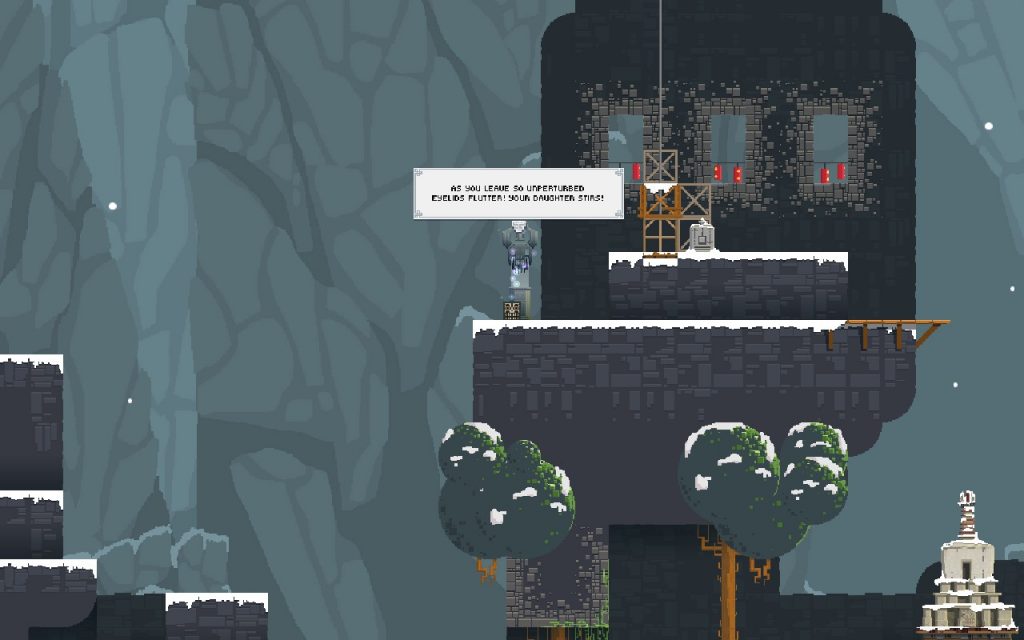 This is, presumably, a good thing. Also, proof the game is somewhat pretty.

These are important things to note, and indeed, look up, because the last one is pretty much going to be the focus of this review. So let’s get the mechanical and visual stuff out of the way first: There is no death, it’s just exploration. It tells a story of a man who has sacrificed himself for the sake of his daughter. It’s visually pretty, and the music and sound are all chill as heck. Also there is a not-bad representation of Palden Lhamo, who you may confuse for Kali (Indeed, there are some schools of thought stating that she’s an emanation of Kali.) The controls, as such, are simple, although the “maps” do not seem to show where you’re meant to go… Although the six sacred tablets do show you where they’re meant to go if you activate them in your inventory.

Bam, mechanical, visual, and aural stuff over with. Let’s get to the meat of things, and why, despite the game being free, I’m being a bit critical. Not of the game mechanically, but culturally. It should also be noted that I am not, myself, a Tibetan Buddhist, so my own criticism should be taken with a grain of salt. All that being said, let’s start with the elephant in the room: Cultural Shoehorning. We see this a lot, even within Europe (Wales, Brittany, the Scandinavian nations, pretty much anything that’s been shoved under “Faerie”… The list is a pretty long one), and to be honest, it annoys.

Bardo is not Limbo. Heck, this is only one sixth of what Bardo appears to be (Chönyi Bardo , the Luminosity of the True Nature, commencing in between the final breath and the transmigration of the mindstream to its next existence, going back to the first Bardo, Kyenay bardo, which encompasses a person’s life.) Making it worse, not even Limbo is Limbo as most folks understand it, and yet the term continues to be used for a transitional state between lives (A concept that mainly came into the consciousness via Dante’s Inferno, which was, itself, a sort of discussion of the theological concept), despite being… Er… Not really a transitional state. 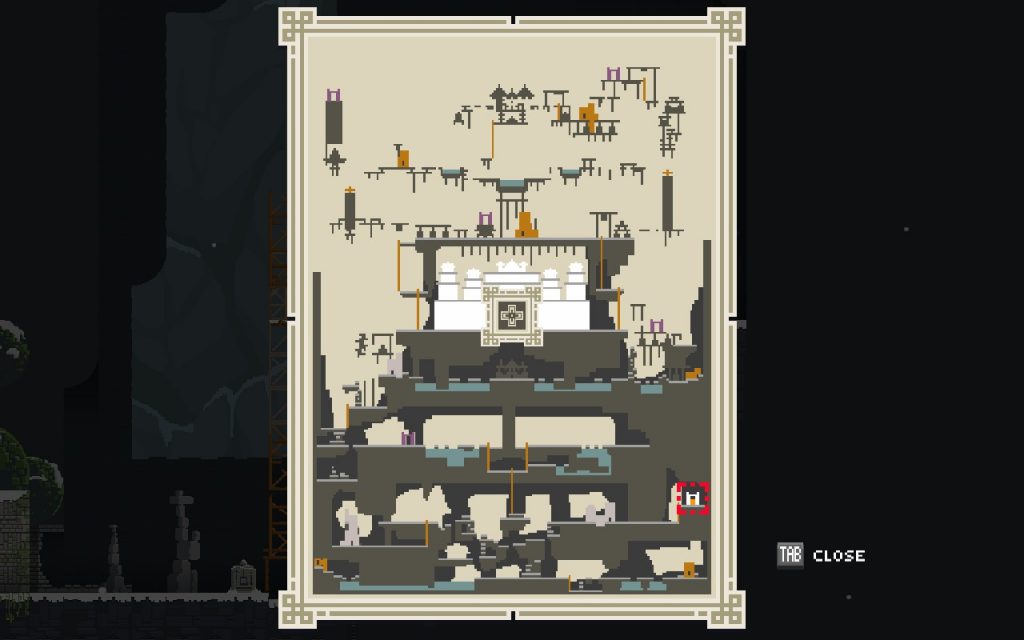 As you might have guessed, this is a game world. The map is showing me where I am.

Yes, I know that’s some heavy shit to lay on you this early. Stick with me. Anyways, Chönyi Bardo is when those who have finally died experience visions, and the nature of those visions depends upon how they practiced and/or understood Buddhism during their life, and whether they recognise this in the first place. Spoilers, the main character of Mandagon must have been someone spiritually buff as hell. I mean, we’re talking enlightenment muscles out the wazoo.

Not that, you know, enlightenment is like muscles. Or maybe it can be. Enlightenment’s odd like that. Anyway, the point is, that only if you are a spiritually aware person will you have the chill as heck experience as you do in game. Otherwise, to simplify things a little, you terrify and delude yourself, adding this baggage to your next existence because you didn’t prepare to shed said baggage. However, that they do not get reborn is perhaps another sign of this, as adherence to the precepts of Karma allow one to escape the beginningless cycle of rebirth that Buddhism calls Samsara (In many forms of Buddhism, a less than ideal state, as opposed to a state of acknowledging unbeing or non-self.)

This may seem like grumping, or nit-picking, but it’s actually kind of important to note, because too often, we simply accept a thing for what it seems to be, rather than what it is. A good example of this would be the Steam discussion on what actually happened in game, where there’s a sadly unsurprising lack of awareness of a lot of this, even with the individual who appears closest to “Getting it”, as it were. Games abstract things, sometimes to the point of misrepresentation, and Mandagon, while very pretty, very chill, and having some great moments, does this by its very simplicity. 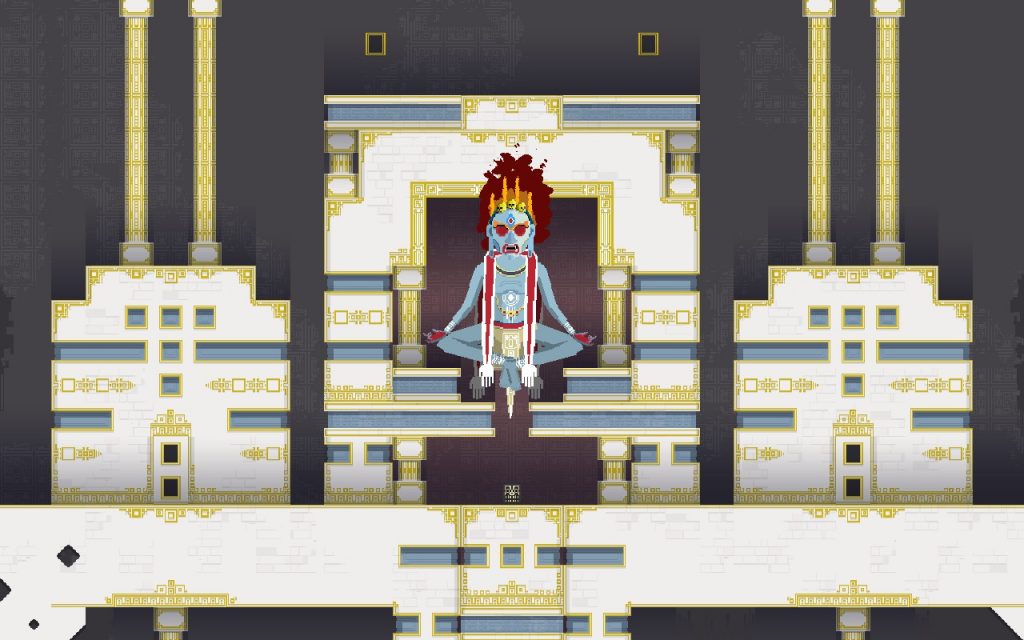 So this isn’t so much nit-picking, or grumping, as helping you be aware that yes, while this is a pretty game, a chill game, a short game, and a free game, it’s also a game referencing a thing that’s a lot more complicated and interesting than the game presents it as. So go enjoy it, it’s all good, it’s free… And then do what I did, and look at the bigger picture. Otherwise, it’ll end up like that Bill Bailey line about the Gandhi Pinball Machine, where you have to light the three Magic Naan-Breads to… Oh, you get the picture!

The Mad Welshman is a long way from breaking out of the cycle. And he likes it that way.