Holy Potatoes! What The Hell?! (Review)

For those who haven’t seen the Holy Potatoes series, they’re essentially games that futz with some established formulae, set it in a world where potato based people live, sprinkle in a boatload of referential humour, and set it into the wild. With Holy Potatoes! What The Hell?! (Yes, the punctuation is mandatory), Daylight Studios have taken on the cooking game genre… And, in the process, given it a very fitting title. 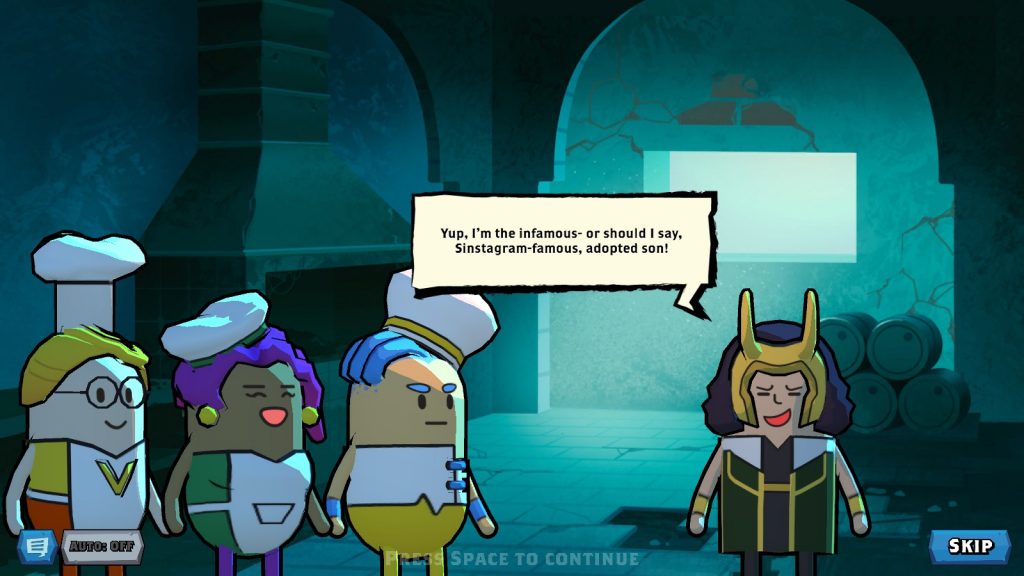 I somehow don’t think this is going on his account.

I mean, what else can you call a game where you, a trio of potato people (and additional, potato based cast) are chefs in Hell serving the souls of the damned in various, delicious, potato-based flavours to deities as you travel through the seven circles of Hell?

Gameplay wise, the basics are very simple: Feed the sinners into various pots to create ingredients. This takes time, you won’t be able to put more sinners in until your current batch is done, and each ingredient maker makes better quality ingredients if they fulfill certain arrangements. Early on, for example, very high sin makes for Good baked potato people. A little later on? Oh no, we’re not doing that “More is more” stuff, sins within a certain range are what makes the ingredients truly… Mwah. Anyway, those ingredients go into a pool, and, after a certain amount of prep time, your customers (an increasing cast of hungry deities) start demanding dishes. Each dish takes time to cook, the customers have requirements, and, for the early levels at least, you only have one stove. So the addition of potato drinks, in which you send dishes to be made into a delicious Baaleys, comes in. Baaleys in moderation delays those deities from getting angry and docking you Favour, serving within a reasonable time, to requirements, gets you Favour, and, while there’s a fair bit more mechanical gubbins than that, constantly expanding as you go through the circles of Hell to your “Reward” , those are the basics. 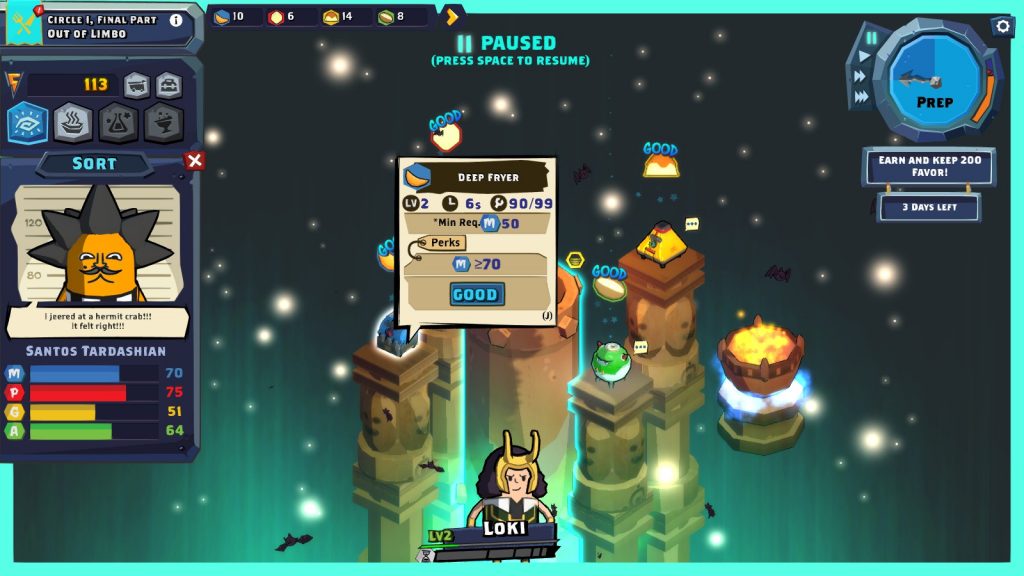 As it turns out, the Potato Holy Book is *really strict*

And yes, at no point have we lost sight of the fact that we are potato people, serving other potato people to potato deities, including Potato Loki (Sinstagram star), and Potato Thanatos (The actual Greek God of Death, who, in this game, guilts over his duties because, even though he doesn’t punish people directly, he still has to watch. Poor spud.) So… How does it feel to play?

Mostly pleasant, actually. For all its grisly premise, its sometimes disturbing sins (Mostly wacky, but sometimes icky, like “I stalked a politician, because I have no morals.” Ew. Ew ew ew.), the game is quite accessible, for several reasons. There are skip buttons for talkiness. Everything is clearly colour coded, and, where colour alone might suffice, shape coded or numbered clearly to boot. Tooltips are friendly and, again, clear. And, and I cannot stress this enough… There is a pause button. Oh, thank Potato God for that!

See, while I can certainly appreciate the high pace and stress of unpaused food making in, say, Cook, Serve, Delicious, a pause button is an option I like, because it gives me the option to remove a layer of play that I don’t want on top of what the game already has (Time and resource management, because, even without the pause button, I’ve had a few hairy moments where I’ve been running low on different flavours of sinners, and, in one area on the Second Circle, I was also running out of sinners. They were being cooked faster than they were coming in… And it still came close to not enough!) It also gives the game room to add more layers, which it’s been consistently doing throughout. The 3rd Circle, for example, introduces condiments and the aforementioned Baaleys. 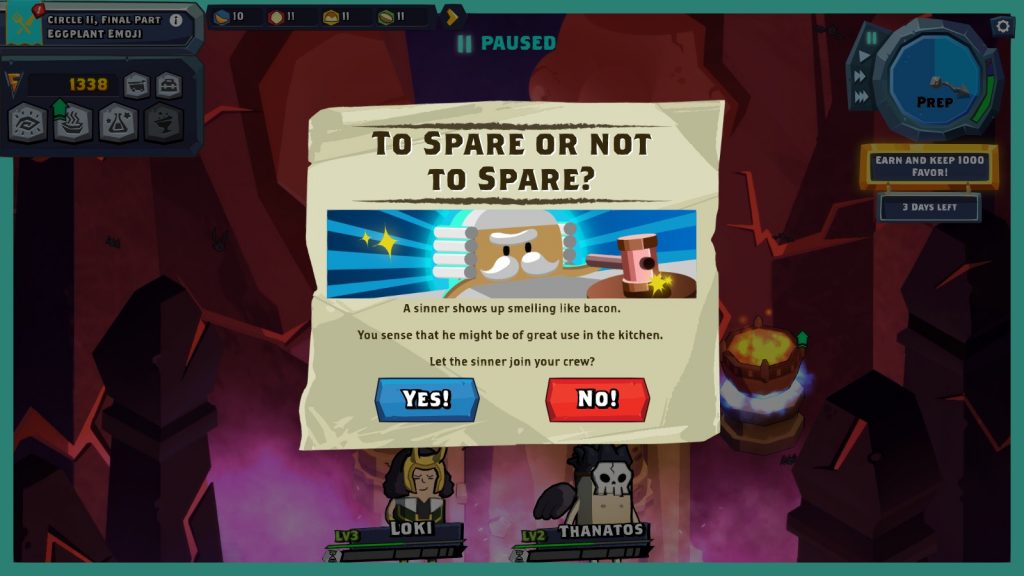 Occasionally, you will be given the option to spare a Sinner, on the offchance they’ll make life easier.

Overall, I somewhat enjoy the game. It’s accessible while also providing a challenge, it has, for all that it’s an excuse for potato jokes, an interesting premise which occasionally does raise interesting questions… And, y’know, potato jokes and oddball humour. At less than £6, it’s very reasonably priced, and I would honestly say it’s worth a go if you like cooking management type dealybobbers.

The Mad Welshman prefers to eat at Tony’s Hot Manna, down the street (metaphorically speaking.) Damn, those pizzas are heavenly!