The wheels of the revolution are always oiled with the blood of the people. That may sound like a needlessly depressing start to a review of Suspicious Developments’ Heat Signature, a game about invading spaceships, but, in a very real sense, that’s what it is. Consider… 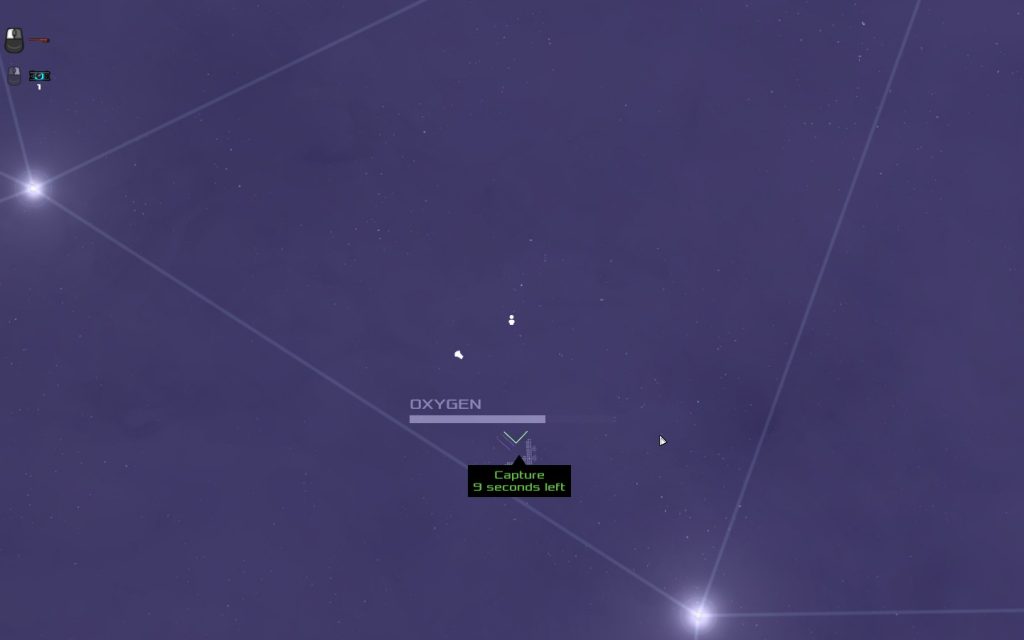 …Dying in the cold depths of space… It ain’t so bad, compared to failing the Liberation…

For all that characters have a brief, procgenned story, a reason for them to join the revolution, it’s their stuff that matters. Yep, okay, once you’ve done enough missions and earned enough intel on the ongoing interstellar war we’re trying to stop by, er… Liberating everyone with guerilla warfare… We’ll let you know how to save your sister, or steal that thing to pay off your debt, or murder the guy that sentenced your parents to death. Cool. No, you can’t will your things to others, even though we basically tell you, every one of you, that it’s basically a suicide mission, and good luck!

Essentially, while you can change characters at any time (even leaving them to die in the cold depths of space, if you so choose, as I admit I’ve occasionally done when particularly annoyed by a mission failure), what you cannot trade is their stuff. And, believe me, you’ll need some of that stuff, as certain enemy types are unkillable without either some very silly plans (Like shooting an airlock to blow them out of it, or just plain blowing up the room) or some very specific stuff in limited supply. Shields, for example, can only be dealt with by subverters and crashbeams. Turrets, at least, you can turn off if you come at them from the right direction… Shielded guys? Nope. Similarly, if you don’t have something armour piercing or explosive, you’re screwed regarding armoured guys who spot you. Those are the only truly egregious examples, but yes, some enemies just aren’t killable without either blowing up the room they’re in, or stuff.

Secondly, over time, the Revolution will tire of you. After a certain point, your liberations, your strikes against the four Mans of the game (the Foundry, the Glitch, Sovereign, and Offworld Security… Independents also exist, but don’t have a specific style, usually just denoted with “They’ve gone rogue, they won’t be running to anybody.”) won’t be as effective in liberating the stations, which provide challenge runs, possible unlockable defectors, and, of course, better stuff in the shop, be that armour piercing weaponry, rechargeable teleporters (Glitching reality in specific and interesting ways), better pod types (like the Foundry Brick, which can just ram its way into a ship rather than have to faff about with all this “Airlock” stuff), and the like. You’re not the hot new flavour of the month, Pavo, it’s maybe time to either retire or go out in the blaze of glory you deserve. After all, the end-goal of the game is to capture all four main factions’ home bases. Your “personal” mission? Even if you finish it, that will be so that you can pass on one of your things (aka, part of your stuff), to ensure it has extra nice traits for somebody, somewhere in the interwubs playing the game. Maybe even you! 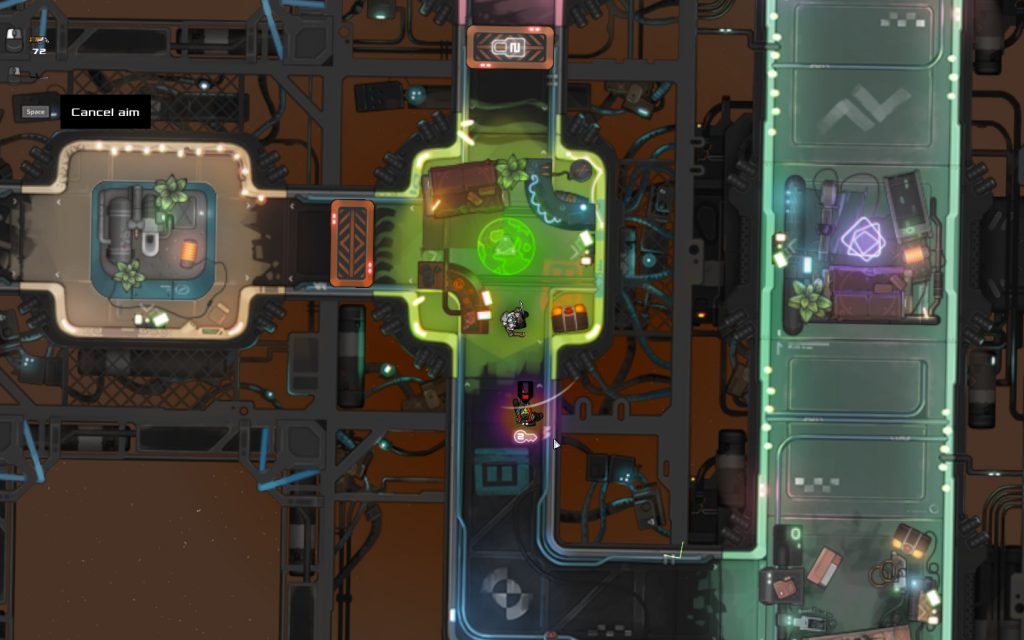 Sorry buddy, nothing personal, but you have a key I need.

Similarly, you can, as a personal mission (Personal missions are always max difficulty), rescue another player’s character, giving them… Perhaps a fresh start? For a time, anyway… As noted, the Revolution cares not for Johnny-Come-Latelies, only the New Hotness.

Overall, the game is somewhat friendly to play, as, for all that it can get twitchy at moments, time slows down when you’re doing something, like lining up a shot or an item use, you can freely switch between items by pausing with no penalty I could see, and, beyond the visual designs of the ships being somewhat hard to read at first, the important parts (the guards, the keys, the captain, the timer, and boxes from which you can steal more items) are very clear. There are also clever ways of doing things, if you have the balls and the right idea… Luring or Swapping an enemy into your ship, then taking off, for example, knocks them out, letting you murder or capture them at your leisure. A Sidewinder or two, cleverly used, can teleport you in hops to the objective or the captain, as, once the captain’s down, alarms no longer trigger. You can even, if you’re ballsy and skilled, blow someone out of a window, and catch both them and yourself with your pod, remote controlled.

So, in the end, Heat Signature is a fairly well designed game. Even folks with silly equipment can, with planning (or a plan you’re not sure will work because holy crap, the first plan failed spectactularly but you aren’t dead and you have a few seconds and… Wait, it worked?), be dealt with. Nonetheless, even acknowledging this, I freely admit I don’t like Heat Signature. Not because it’s a bad game, because it isn’t. 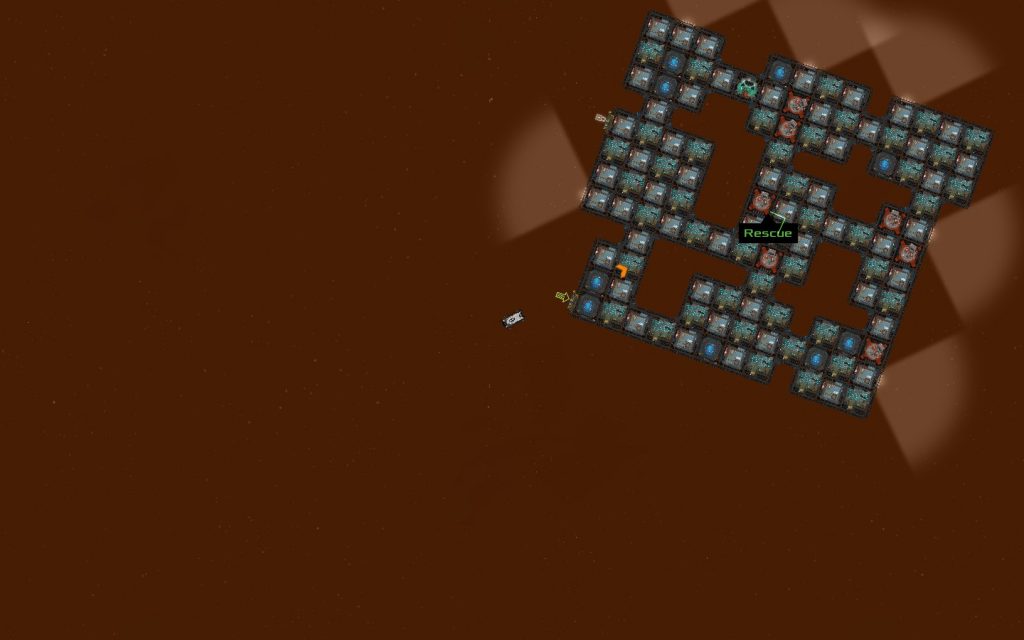 Ships get *big* , and chock full of deadly things in the higher difficulty missions… and Personal missions are always the *deadliest*

But holy crap, do I not like being reminded of the subtext on display here.

The Mad Welshman would very much like armour piercing concussive weapons. Hopefully one day, he will find them. Or make them. It matters not.