Source: Cashmoneys
Price: £10.99
Where To Get It: Steam
Other Reviews: Release

Capitalism sucks. There’s really no easy way around it. It’s biased, it’s unfair, and it promotes shitty attitudes that make everyone’s life a misery. Which is, in its way, a good segue into talking about Gremlins Inc, a computer board game about a steampunk capitalist society of Gremlins being dicks to each other. It’s a game that needs a little polish, a little toning down of the single player AI, and a somewhat more clear tutorial and UI… But it’s also got the same ingredients that give certain well known board games their rep as awesome games that destroy friendships. 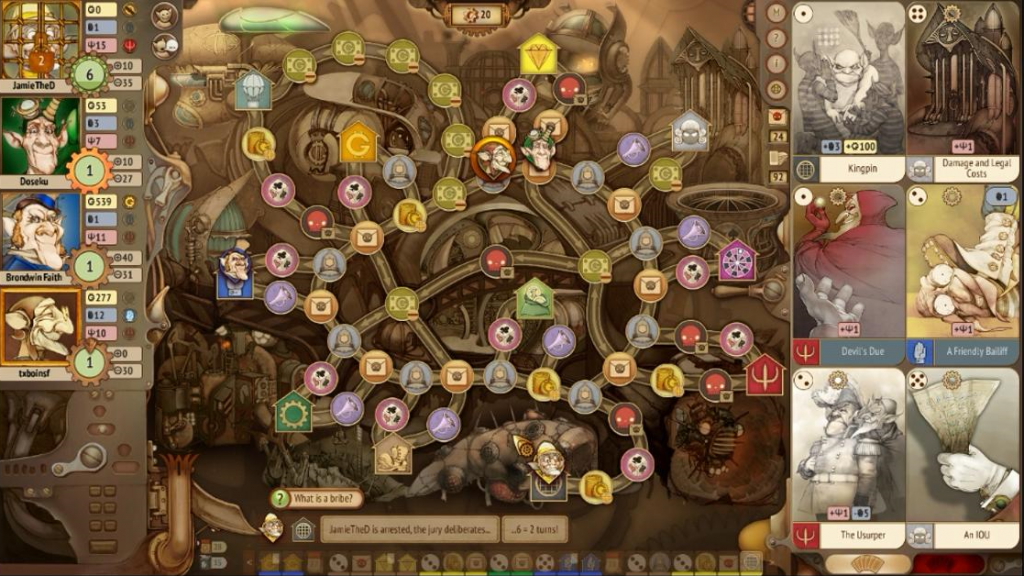 A little hard to read parts of the UI at times, but the art style is *gorgeous*

Ruleswise, there’s a lot to go into, so I’m just going to sum it up: You have to achieve X victory points (With 20 being average), while stopping anyone else from doing the same, and you do it by moving around a board (using cards), and playing events when you’re able to (using the same cards). Sometimes bad things happen to you, and there doesn’t appear to be any single “OP Strat”, as it were, because everything is out to get you, including large portions of the board. It’s a little more complicated than that, and the tutorial doesn’t cover everything (Like the existence of a collective pool of “EEEEVIL” cards, as a prime example I wish I’d known about), but it’s effectively in a very solid beta (Meaning there are bugs, but not as many as a release would have, and nothing that appears game breaking), and board game afficianados would definitely enjoy it. Why?

Let’s start with how it encourages a wide spectrum of good, strategic thinking. I have three cards. One can be used relatively nearby, but I can’t afford it. Yet. One can be used right across the board, and one can be used back the way I’d already come. All of these options are technically viable, but to play any of them well, I have to think. The first option just requires both time and not being dicked over. It’s do-able, but requires me to either not be seen as a threat, or to pre-empt the threat from whichever player I think is going to threaten me. The risk there is that I’m either wrong about which player is the threat, or don’t keep a low enough profile. There are shortcuts I could use, but they have a chance of screwing me over just by taking them, especially on the shortcut through the middle of the map. I have to be adaptable. I have to play the players as well as the game. I have to risk assess. And I have to be lucky.

Even Jail can be used to win the game, if you’re clever about it…

This turn, I am not lucky. “Who rolls a 1?” I ask jokingly, as I refuse to bribe my local policeman so as to stop any searches without risk. After all, if I do that, another player gets to profit off my loss. And I roll a 1, immediately being sent to jail, and watching one of those options evaporate. But that’s okay. Even jail can be used to better my circumstances. In the long term.

Secret and Criminal cards. Evil cards. Elections. Bribes and Searches, and the role of the buildings… The game has somewhat of a learning curve problem, which means the tutorial has to be spot on (And currently, doesn’t show off everything you might need to know). A good system of tooltips somewhat helps, but new players will want to invest time in the single player to get a feel for things, and those of us who can’t invest an hour or so into a game? Probably shouldn’t get this, as a 20 point game might take as long as 4 hours, and the first single player challenge is 30 points to victory.

Similarly, the aesthetic is both a good and a bad point with this game. I love the art style, having always been a sucker for some good ink and pencil work… But the UI suffers in readability because some of the parts of it are small and relatively unhelpful (The turn log, for example), and the board looks busy because light value contrast isn’t as clear as it could be (Although, again, the tooltips help somewhat with “Where can I go?” and “What does this do?”) The music is pretty good, just the right, farcical feel for a farcical fantasy dystopia. 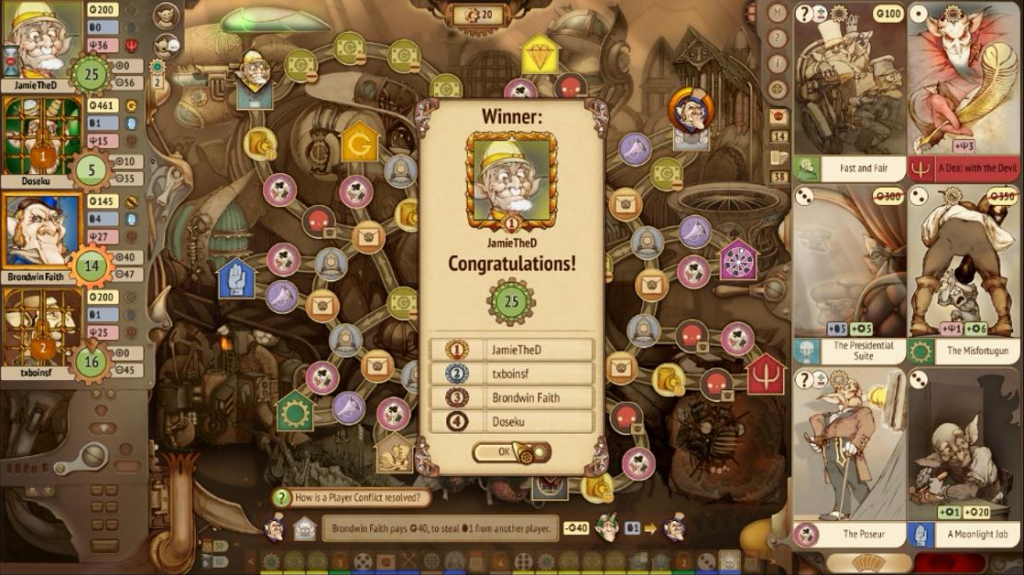 However, when all’s said and done, I look at this game, think “This cost me as much as Dr. Lucky did, back in the day”, and smile. It’s a fairly well crafted, competitive game, and the devs know exactly what they have on their hands, with a tournament already having been started in the Early Access phase. If you want a competitive, multiplayer computer board-game, and have the time to spare, I really don’t think you could go wrong with Gremlins Inc. I would, however, mention one final thing in regards to the multiplayer… Er… How do you make a game friends-only again? Wasn’t a problem right now, but best to nip it in the bud if that hasn’t been thought of. I had a lot of fun with this, and expect to have more fun in the future.

The Mad Welshman cackled with glee as he dipped freely into the Widows and Orphans Fund for Disenfranchised Gremlins. Campaign Contributions, it seems, were always there if you knew how…