Hidden Object Puzzle Adventures, in my considered opinion, are mostly creatively bankrupt. I’ll save the rant as to why for another time, but one of the main elements is that there is little to no consideration of where the puzzles fit. I’ve seen Memory puzzles in churches and “secret doors”, I’ve seen evil lairs guarded by the amazing security system that is… A brute forcable colour matching puzzle. The story, similarly, is often formulaic, and often has a “Tell” that conflicts with its “Show.” 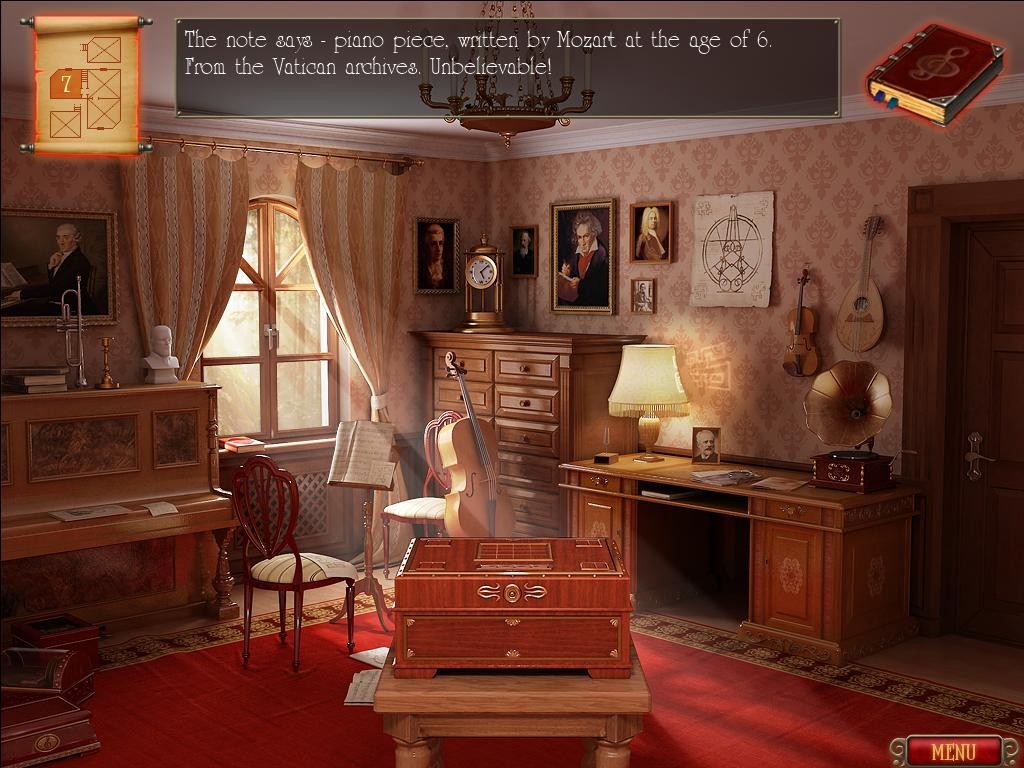 Five rooms, each filled with bits of music trivia and puzzles for your puzzle box.

But I have actually found a good HOPA. And I’d completely forgotten about it. Let me correct this injustice, and show people why it works, when so many others make me groan and grumble. Let me tell you about Musaic Box.

Musaic box is the tale of a woman of somewhat indeterminate age, who has an explorer grandfather with a taste for music that was passed down. She comes to visit her grandfather, on the promise of a very special birthday present. But first, she must solve the riddle of the Musaic Box, and the clues are left around the house. Doesn’t sound like much, does it? It even takes around the same time as your average HOPA (Two or so hours.) However… 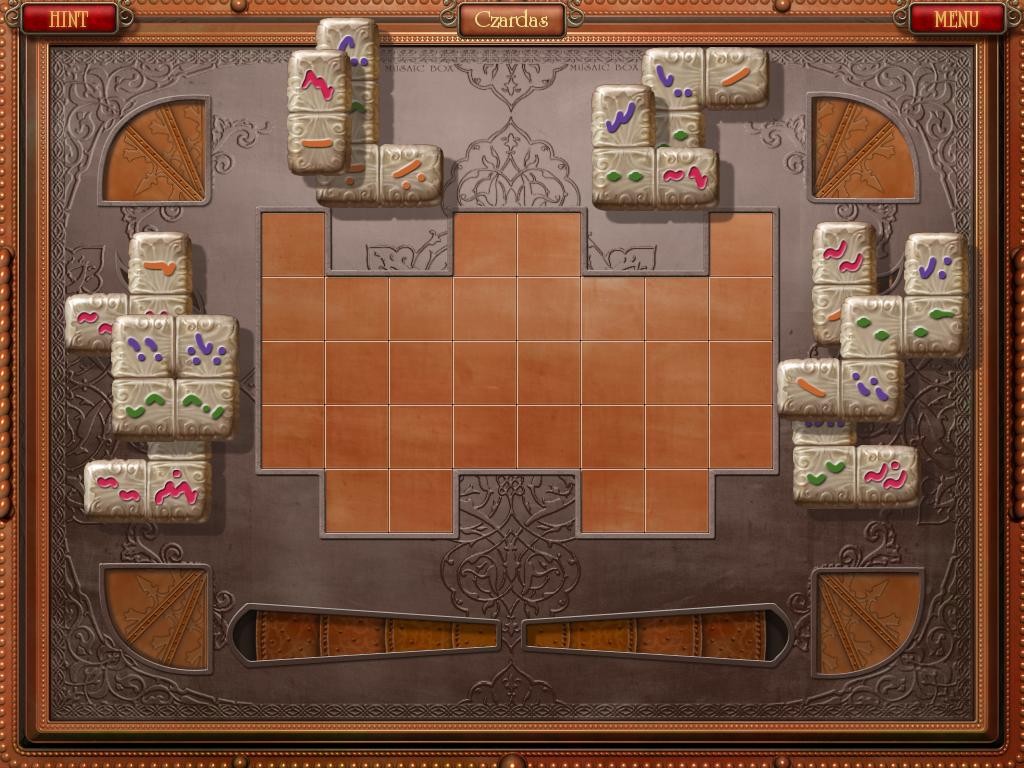 You didn’t really think I’d show you a completed puzzle, did you? For shame!

It’s tightly focused. One house, six rooms, and every room has something to do with music or musical history. Within each room is a collection of patterns for the Musaic Box, hidden in places like on the shade of a lamp, or on a printing press stamp, and those patterns lead to the core element of the game: The puzzles. The descriptions for the puzzles are from the character’s perspective, so we know that she was called ‘Little Figaro’ for singing the Barber of Seville at an early age, that she used to do ballet, that she skinned her knee while climbing trees… The puzzles round out her character in a way that supports her sometimes bemused commentary on Grandfather’s collection. In its small way, the story supports the game. And, because it’s in a small way, it doesn’t over-reach itself. There’s no moment to moment supernatural drama that falls apart after a slight examination here, just a young lady playing a game on her birthday. But, as I mentioned, the puzzles are the core element to the game. Let’s go into those. 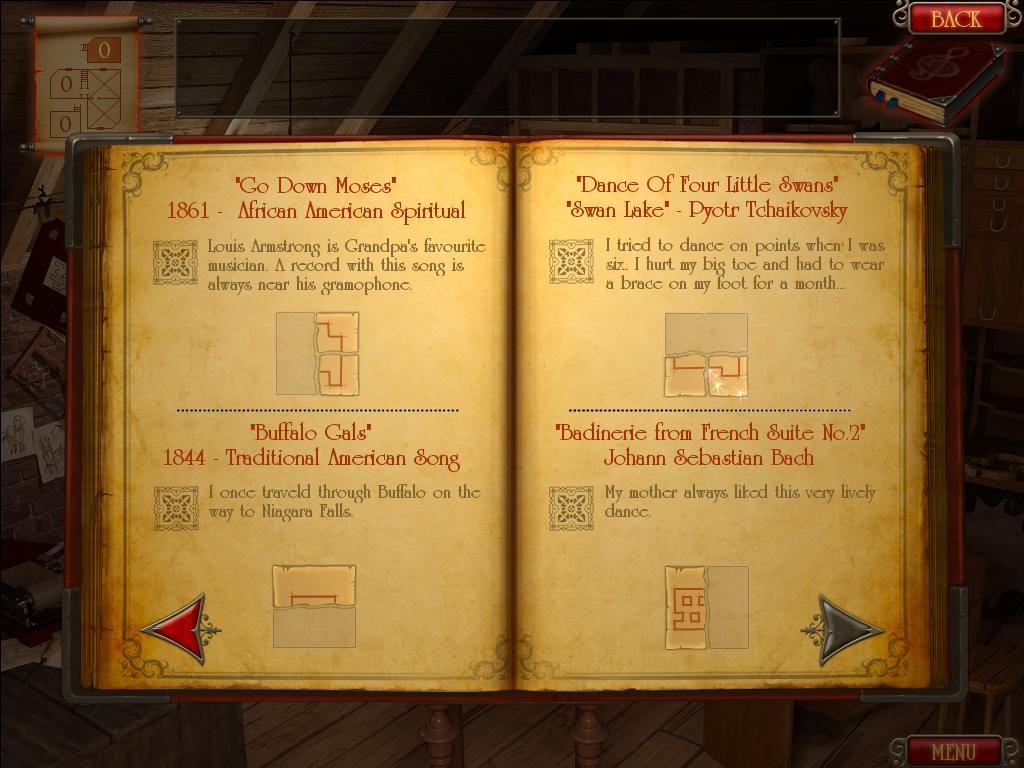 Not only the core of the game, but where we get character backstory. Not a whole lot of it, but the game doesn’t contradict itself.

Musaic is a portmanteau of “music” and “mosaic”, and, essentially? That’s the puzzle right there. It’s a jigsaw, but a jigsaw that involves music. There’s usually (But not always!) one instrument that you can hear, and you’re supposed to piece together the short tune, making sure that matching colours of symbols aren’t on the same column. Sometimes there’s no lead instrument to listen to, sometimes there’s patterns to match up instead, but for the majority of the game, it goes like that, leading to one of my two criticisms of the game: It’s only moderately challenging until near the end. Otherwise, it does everything it sets out to do, it entertains, and everything fits together as a well designed game should. Of course, finishing the game nets you the birthday present, an “Atlantis amulet” (sic) that allows you to rearrange the tunes in the game any way you want (Which sounds horrible, for the most part: My second criticism of the game) , but then you realise “I spent a third of what I would spend on Hidden Secrets: The Horrific Jumble Of Items” , and you remember that the game has some pretty good short arrangements of classical tunes (Including a surfer rock version of “My Bonnie Lies Over The Ocean”, and a properly swinging “When The Saints Go Marching In”.) And you smile. You may not play it twice, but you have had fun.

HOPA devs could learn from this example, which goes to show that “more complex” doesn’t necessarily mean better.

The Mad Welshman smiled as he slotted the last part of the Musaic into place. Victory, as it turns out, sounds like The Entertainer.