Screwfly hate you. They love you, but at the same time, they hate you (Well, not really… But it seems that way when you play sometimes. ;D ). They want you a gibbering wreck on the floor, babbling about the dark between the stars, or, in the case of their first game, Zafehouse Diaries, about how the dead won’t stop moaning and scrabbling at the walls outside. Screwfly make Legit Hard Games. And I want to celebrate this, by talking about Deadnaut, and how the game supports the mood it wants to invoke. 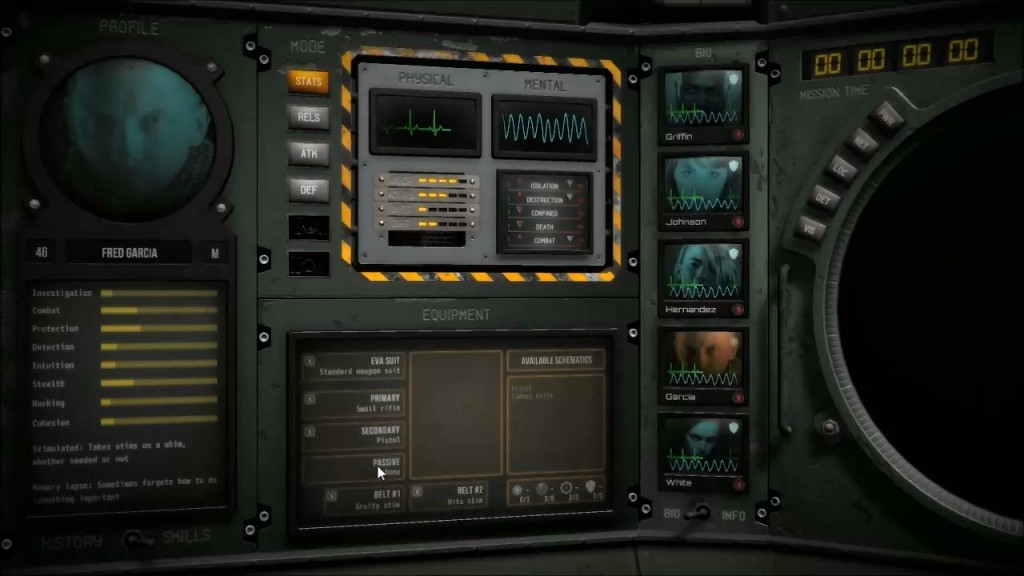 You can create your own crew, but monitoring and equipping them from then on is up to skill *and* luck.

Deadnaut is not a game I’m good at, and I don’t think I’m meant to be good at it. The game, in a sense, resists it. But this is one of the rare cases where I find myself more immersed in the experience because of obtuseness, not less. Why?

Because in Deadnaut, I’m a Lieutennant Gorman, watching my own maladjusted crew of misfits and criminals attempt to board supposedly long dead alien ships that, you guessed it, aren’t long dead after all. Not for me the experience of directly seeing what’s happening through amazing Commander Vision. Oh no. That would imply we’re valued, and have the technology. No, we, the characters (And, by extension, the player’s unnamed and invisible character) are the dregs, the people Humanity would rather throw in a meat grinder. So we have three screens we can switch between. And, bad commander that I am, I’d rather get fucked than micro manage anything. 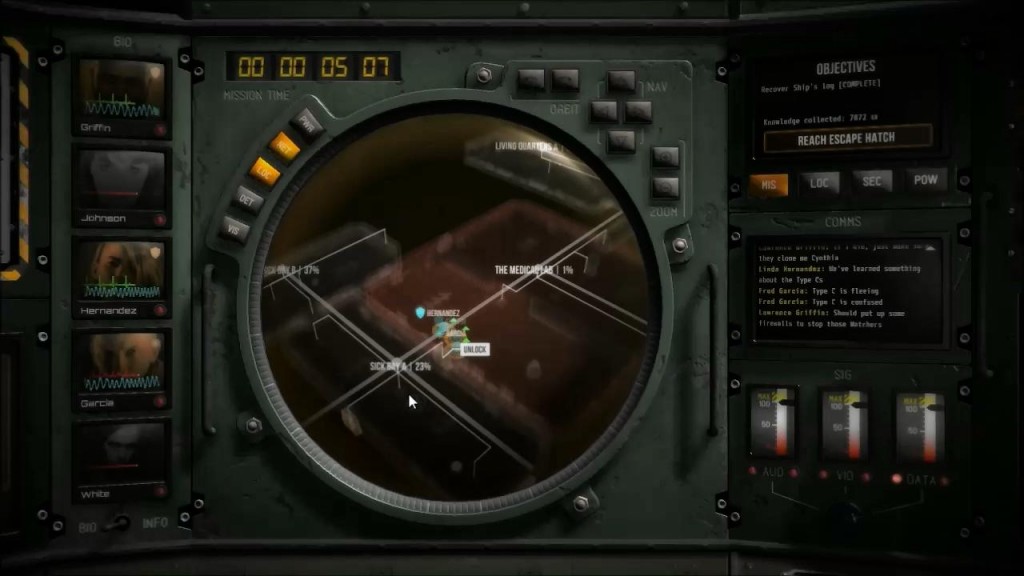 Pictured: Me suffering because I was weapons-free in a heavily damaged hulk.

The three “screens” are pretty simple in theory: The left shows the team, their equipment, their stats, their quirks and flaws, and their health, mental and physical. Being a Gorman, I don’t really look at that too much in missions, and panic when the suit-breach alarms are going off. The right shows information we’ve gathered, giving me clues as to the threats we’re experiencing, the ship and crew logs we’re salvaging, and the security/power status of the ship we’re entering. I only look at this between missions, even though it could give me early warning that no, our guns won’t work in this situation.

The middle screen, for me, is where it’s at. The buttons sometimes bewilder me, but I know enough to push NET to see the Watchers, automated, roaming antivirus programs gone wrong, as they go about their not-so-merry business of Keeping Things As They Were (to my detriment); LOC , which lets me see how damaged an area is, and occasionally, when the situation demands it, PWR, which lets me see if a turret I’ve noticed is powered up or not. I know enough, being a greedy corporate scumbag, to turn the signal booster dial to SIGnal, and leave it there, even if it dooms my crew because I can’t see what’s happening (VISual) and can’t give them orders (AUDio). The more signal I have, the more KnowledgeBux we get from looting these rotting hulks, and the better I can equip my poor, doomed squad for the future.

Hell, sometimes, I’m nice enough to resurrect one, if I can afford to do so. So, as you might have guessed from this description, there’s a lot to take in, and not a lot of it is in easy reach, having to switch between screens to see things, having to, god forbid, split the group so we can keep the Watchers from resetting that turret that almost chewed the squad up when they opened the door, or use the special abilities of the Shield and Sensor suits to scan ahead, plan, and protect team-mates from the dangerous conditions created by nigh-destroyed rooms (Because our vacuum suits are cheap, and don’t protect against space worth a damn.) This is a game where, if you’re good, you can micro, switching between screens to gauge threats in a safe moment, pair up team-mates efficiently (This one hates this one, don’t keep them close. This one hates open spaces, try and keep them in small rooms. This one doesn’t like open spaces, use them as a rearguard) 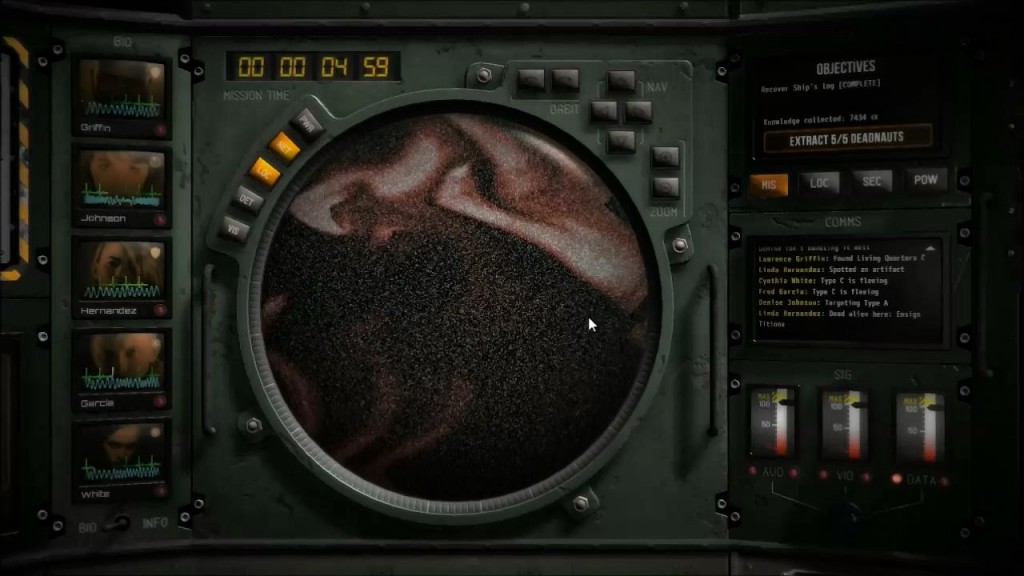 This screen may not make much sense… Until you realise I’m being screwed around with by ancient space-ghosts.

But this game, in a sense, doesn’t want you to do that. Watchers and Signal Dampers can mess up your visuals (Leaving you nothing but static) and audio (Leaving you unable to even warn your team of nearby threats, or tell them to get the fuck out of there right now before it collapses). Your guns are useful, but also damage the ship, so sometimes, you will have to order your squad not to use their weapons… And it won’t always help, either, because sometimes the enemy has guns. And sonic shockwaves. And plasma bursts. Melee weapons exist, but I’ve never seen them used very well. And the game’s controls don’t help either, there are very few hotkeys, so nearly everything is “Click shield person, right click this person we want to shield” or the like.

Despite that, I love the game. Why? Because, with its flaws, it makes me feel like a Gorman, and, on a good day, like a Corporal Hicks. The game, through its flaws and hateful moments, creates exactly the feel it’s aiming for: That moment where everything is going wrong, and you have to act and oh god someone’s dead what the hell do I oh god another beep beep beep BEEEEEEEEEEEEE-

I have precisely one criticism of this game: I’d like to actually read logs, instead of being unable to look at any screens the moment I either win (By completing a set number of missions), or lose (By all my squad dying before extraction.) I know the logs, just like the diaries of Zafehouse Diaries, are also procedurally generated, and so lose their lustre if you look at them too closely, but I still want to see. I want to see what I missed, why I failed. I want to reread the last communications. I want to know. 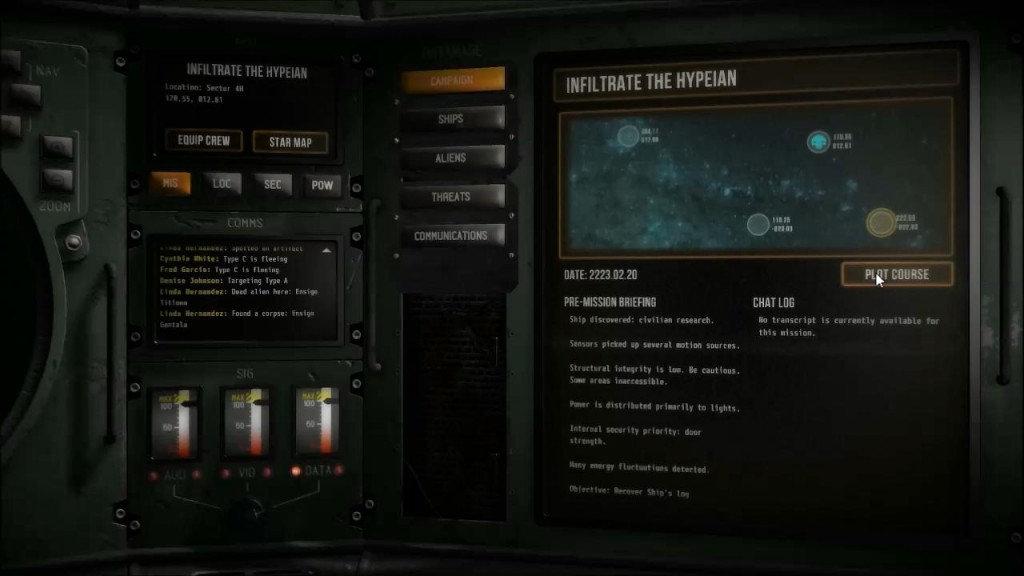 All of the buttons on this right screen provide potentially useful information. It is not a good idea to check it mid-battle.

But if you want a good example of a game that accurately creates the feel of being the inept (or life saving) commander giving orders from afar in a sci-fi action horror, then Deadnaut is pretty bloody close. You can even, if you’re feeling particularly sadistic, make your friends in the game as crew members (Although I’m not sure how many people you know who have the drawback of fucking up radio reception randomly wherever they are, as an example), and forever voyage with those instead of procedurally generated crew.

Me? I like the procession of badly mismatched crew. Makes me feel better on those rare occasions I win. There’s even the promise that some Deadnauts can be given parole from their forever deadly duties. I have yet to see it. One day, I may be a Good Commander, and have that happen.

Hahaha no. They’re all screwed, every time. Because I am Gorman, and I love to panic. I’m an asshole that way.

Deadnaut is available on Steam for £6.99. I have also recorded some LP type footage of it here.