Regardless of your position on the worth, correctness, or validity of Art Games, Antichamber is a game I would defend as “An Art Game” to the death. It is, in its sense, art. It is most definitely a game, with challenges, obstacles, and mechanics. And it is a utopian game.

Wait, what the hell is a utopian game when it’s at home? Read on, and I’ll try to explain. 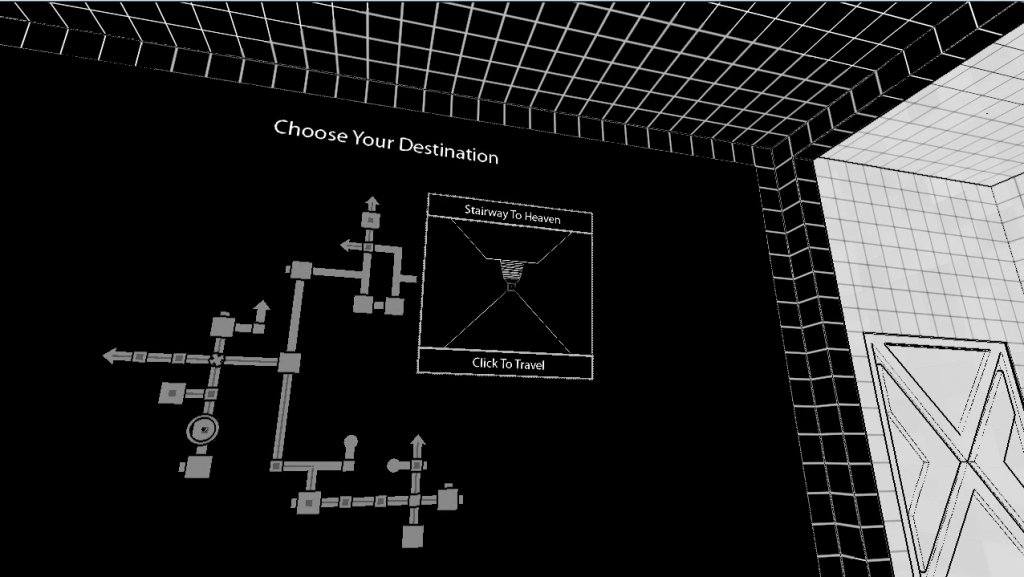 There’s a lady who knows… All these puzzles are gold… And she’s sung in the title of the puzzle.

Antichamber is a game without a fail state beyond you giving up. Now before you think that’s boring, let me point out that that doesn’t mean you’re not going to fail to solve a puzzle. But you’re not only always going to be able to have another go, you’ll be able to travel between most puzzles without a care in the world. Nothing is going to kill you. Nothing is telling you you’re shit at the game. In fact, quite the opposite: The game’s signposts are basically life advice, generally quite chill life advice at that. And it’s often pertinent. For example, there’s a bridge of sorts, and the signpost for both crossing it successfully, and falling off it reference a tightrope. The game shows you what happens if you take that bridge too quickly beforehand, and what doesn’t happen if you take it slowly (It won’t disappear from under you unless you deliberately step off it or speed up at the wrong time), so… It’s basically an analogy for tightrope walking, which is generally best done at a relatively sedentary pace. Another has a sheep leaping off a cliff, after you followed an instruction to, er… Jump off a cliff. Something something cliff something something everyone else something? I’m sure, if you’ve even encountered fictional parents, you can fill in the something somethings there. It’s a thing parents like to say.

Antichamber owes a lot to… Well, a lot of things. Life is what the game is an analogy for, but it owes bits and bobs to Portal (As it uses a sort of non-violent, puzzle solving “weapon” with multiple functions unlocked as the game goes by), to M C Escher (As it plays with perspective, direction, and space being a bit bendier than usual), and to logic puzzles (As everything has internally consistent rules, and so you can deduce, reasonably, how doing thing A will affect problem B with at least good accuracy most of the time.) You are… Well, you, really. And you’re in a maze. A maze that is life. You start with no tools, no knowledge, and a fleeting sense that you don’t have enough time (Because, at first, it appears you are on a timer, and it’s not a long one for a sprawling puzzle game.) As the game goes on, you accrue knowledge (Certain walls go away when you do one thing, this part of the maze acts like this), tools (One of four cube guns, each one adding an ability to your arsenal, from the ability to take individual cubes and put them somewhere else, to the ability to make nigh infinite cubes, to the ability to make walls of cubes, moving them around), and, along the way, you discover… That actually, you can take the game at your own pace. Just like life, Antichamber is not a race to the end. Stop. Enjoy the flowers. Or, in this case, a picture of a man with his trousers off, and the associated life lesson. 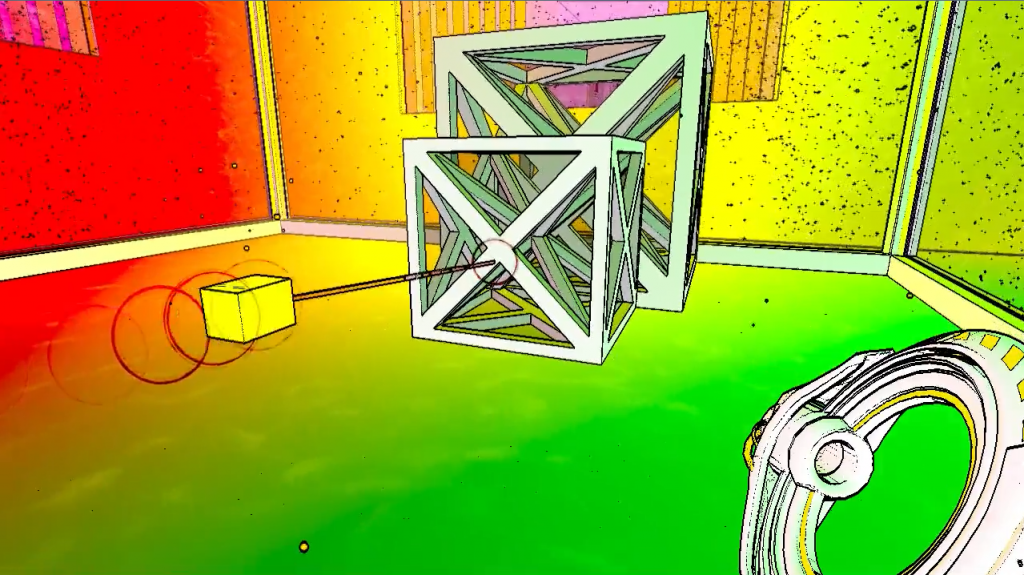 You may be mistaken for thinking this is an easy puzzle. It still has challenge. Because everything except those crates is lava. To that brick.

The thing being, of course, that you are, in this game, trying to get to the end. The game tells you what a bad idea it is to try and race there. It shows you little easter eggs, misdirects you, tries to slow you down with increasingly more skill intensive puzzles… But you’re curious. There is something that eats light. Something to which doors are no obstacle. Something which seemingly eludes you at every turn. And… When you catch it… It’s all over. That’s right… The game ends, and oblivion results. That something, that nebulous, slightly ominous thing you’ve been chasing for no reason you can determine beyond the goal… Is death.

It’s rather clever. But it doesn’t stop there. Everywhere you look, there aren’t only puzzles involving perspective, there’s the overriding message that hey, maybe… Just maybe… If you look at things from a different viewpoint than the one you’re used to, think sideways? Things will go better for you. You’ll expand your mind. You won’t only get better at the game, you’ll get better at being you. It’s a positive message. In fact, the only negative messages in the game are that you shouldn’t really hurry (The antithesis of many games), and that you won’t get through things consistently by just bulling your way through (And you won’t.) Like I said, utopian. No danger unless you actively seek it out. No challenge that you have to accept (There’s often another way until near the end, when your choices narrow due to… Well, having solved everything else!), and you can always, always go somewhere else… Maybe play with an old puzzle just for the heck of it. You just have to remember how to get there. 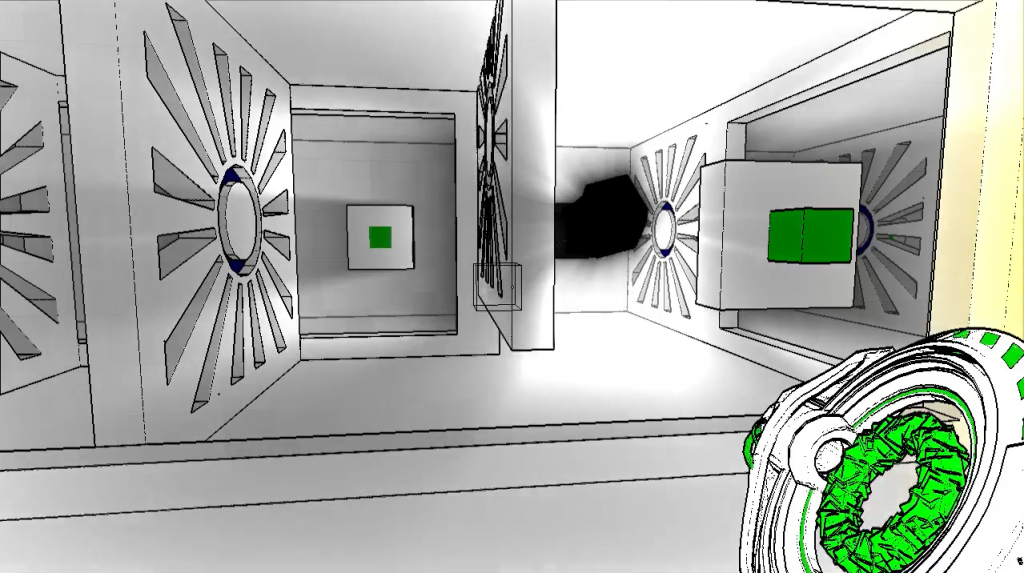 It’s kind of clever, really. Normally, this room is actually quite well lit.

Finally, it’s tightly designed. There is no HUD. The options, as well as the map and your collection of signposts are all in a single, easy to return to location, and whenever a new mechanic is to be introduced, you can guarantee something’s going to either be nearby to show you how it works, or you’re going to come across something that teaches you sooner or later. Good example, Eye Walls. Eye Walls are terrible at staring contests, fall asleep, and vanish when you stare at them for a time (The time being dependent on the door.) There’s a crossroads at one point early in the game, a door that won’t open if you look at it, and directly opposite that door? An Eye Wall. Walking slowly backwards, you’re guaranteed to see it close. Or, another, sharper example happens when you enter a room with a tantalising hole in the ceiling. Inside the hole? “Don’t Look Down.”

Well… Whyever no- AAAA EYE AAAAAAA FALLING AAA WHERE DID THE FLOOR GO?

And then you land harmlessly somewhere new. Because the game’s cool like that. And you’ve learned a new thing.

So, Antichamber is tightly designed around a theme. Good. It imitates life (Via analogy). Good. It is, indisputably, a game. Cool.

So it’s an art game. And it’s well worth checking out.