Oh, that poor old Van Helsing bloodline. They’ve been put into some pretty awful films, continuations of the Dracula storyline, lampooned… Oh, it’s tough to be a Van Helsing. However, this isn’t quite so true of the Van Helsing Jr in The Incredible Adventures of Van Helsing series. And now, for slightly less than the original trilogy put together, we have the whole shebang in one package. 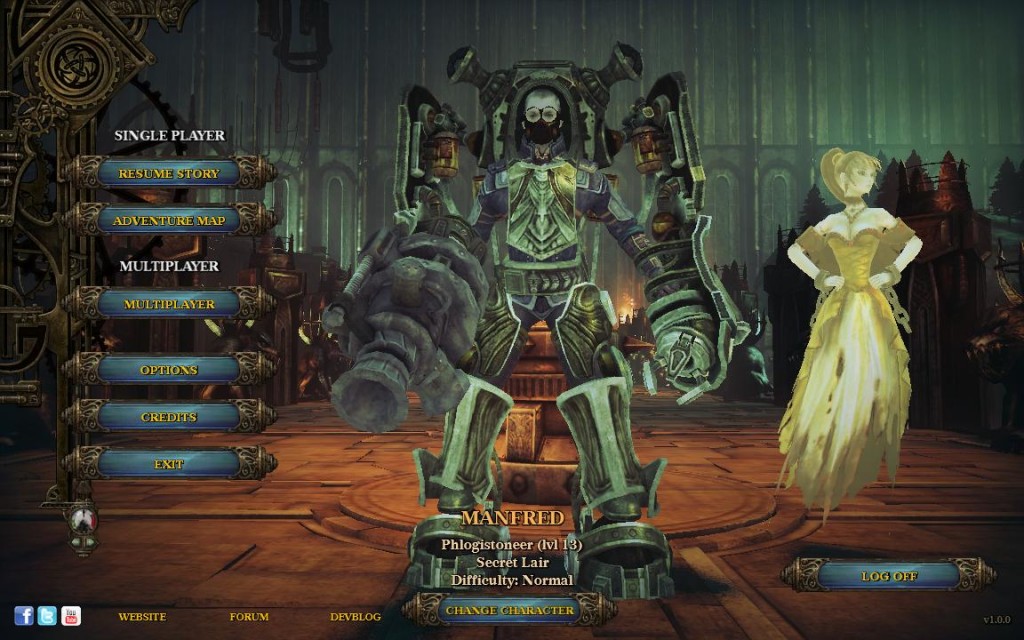 I’ll mention a couple of things right off the bat. Firstly, this requires an online login to play, even in single player. I’m not entirely happy with that, but there it is. Secondly, I have not played the trilogy before this point. This is basically a fresh look at it.

So, if you’ve ever played the Torchlight or Diablo series, you’ll have the rough idea: Left click things till they die, occasionally hitting numbers, right click, or the heal button (Q), then left click their loot, make your numbers bigger, and go off to kill things. The devil, of course, is in the details, and there are definitely things that make Van Helsing unique, such as an upgradable companion (The irascible, vain, and selfish wraith Katrina), a crafting and upgrade system (using magical essences and the banging of three items of the same type together), hidden quests, and power-ups to your active and passive skills (called Auras.)

The thing is, it suffers a little bit from a somewhat erratic difficulty curve. For most of the first chapter, I happily murder nearly everything in sight, often killing entire groups in one blow (This is especially true of the Phlogistoneer, whose weapons are basically rockets and cannonballs), but when I got to a certain boss fight, suddenly, it went from “Ahahaha! Die… Dieeee!” to “Huh, I have to take the prie- sigh … The priest out first, run round like a blue arsed fly until my shields regen, kill the- Oh, sod, I died again.” 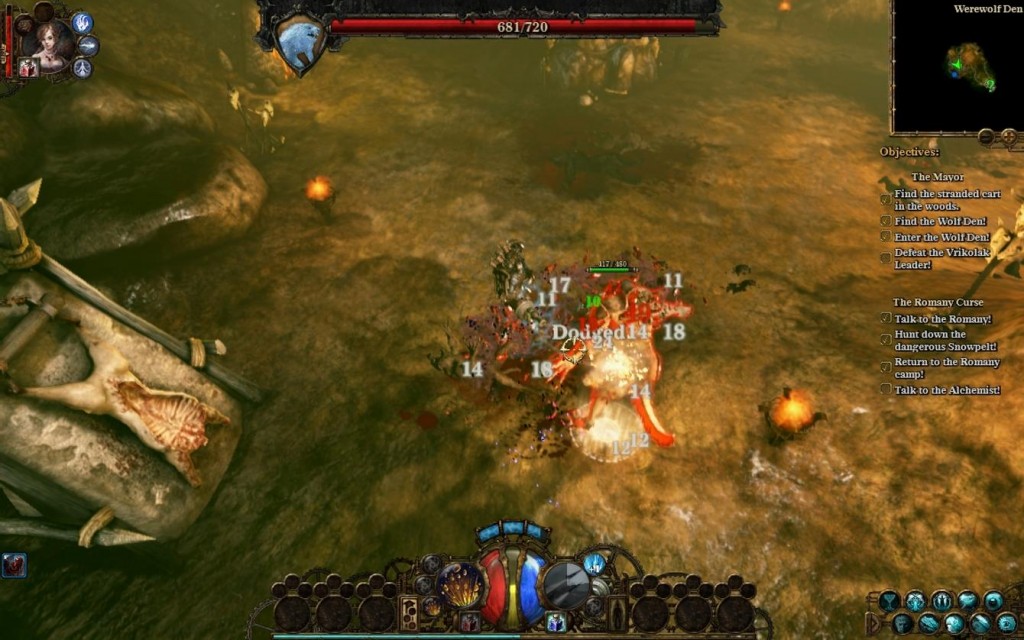 And from there, it was challenging all of a sudden, and has remained that way up till halfway through Chapter 2. I expect another sudden difficulty spike any minute now.

However, once I hit multiplayer with a friend, the game changed. We laughed, with one or the other of us making “Ohhhh”s and “Ahhhh”s as we showed each other the Hidden Fun Stuff in the game (For lo, there are hidden quests), and chuckling at the fact that, due to budget and time constraints, the voice acting for the first chapter is aimed at the Bounty Hunter class (originally the only one, now one of six.) It’s okay, though, they all wear silly hats, so we were fine with it, NeoCore.

It’s important to say, at this point, that the game is fun. The writing is silly and over the top at times, but presents some interesting ideas, and does so consistently (Turns out the original Van Helsing brokered a peace between man and monster, an interesting inversion of the way things usually go), while, if what I’m seeing and what I’ve been informed is correct, there’s been some major changes under the hood to mean that no one class feels less than interesting to play. It still retains the three chapter structure, and I enjoyed messing around with the crafting system. 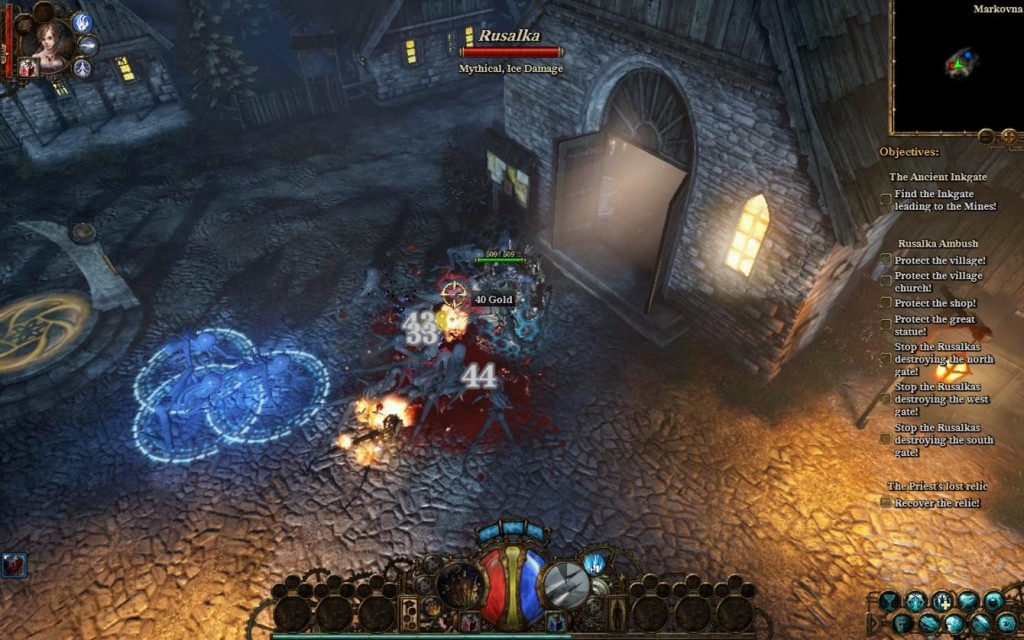 Just like any ARPG, when you get swarmed, it can be a little tough to work out what’s going on.

Of course, it’s not without flaw, and some areas (Most especially in the crowded urban landscape of Chapter 2) could do with a bit of a readability pass, as I often thought I had found a clever way around things, only to find that no, actually, the path I’d taken became impassable only a short distance in, with nothing interesting to show for it. The ability tree for the main character also seems to encourage specialisation, as you’re not going to get your second tier abilities until Chapter 2 (Unless there’s something I missed), so spreading your points around seems an easy way to fatfinger your way to death. There’s also the N key, which zooms in to where your mouse pointer is because… Well, actually, we never figured that out. The angle doesn’t seem quite right for dramatic closeup.

Overall, though, I think ARPG fans would like this version, and it seems like an okay introduction for new players to the ARPG genre (Although I’d still say Torchlight is tops for that.) I shall leave you with the parable of the Big Red Button. So far, I have encountered two Big Red Buttons. You should all know what is said about Big Red Buttons, and it won’t surprise you to know that Katrina, bloodthirsty chancer that she is, wants to push said BRB because she wants to know what it does. One of these times, it ended in tragedy. Another, it ended in murderous glee. In a way, this sums up the experience very well, with both good and bad coming from the same… Shiny… Red… 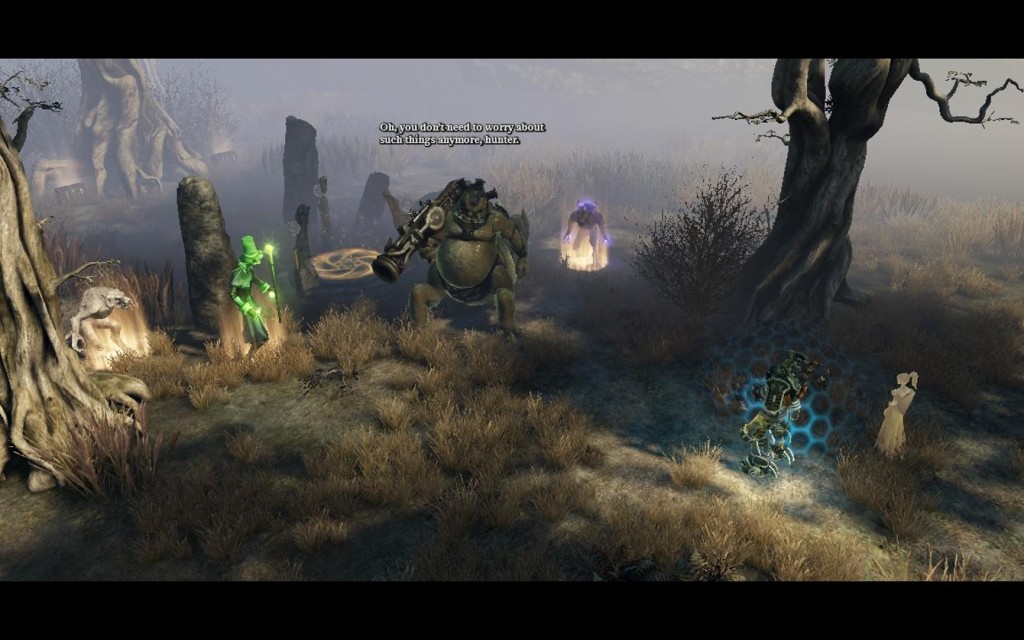 I should also mention, at this point, that the voice acting can be quite good at times.

The Mad Welshman sweated as Katrina grinned. His finger hovered. Fate hung in the balance.