Source: Review Copy
Price: £14.99
Where To Get It: Steam, Official Site
Other Reviews: Early Access

Erik Johnson, one of the Misfits Attic team on Duskers, stated “When I created Duskers it was really around a feeling: of being alone in the dark, of isolation, of being surrounded by old gritty tech that could only give you a partial picture about what’s going on around you, like the motion sensor that goes off, but doesn’t tell you exactly what’s out there. I like the idea of needing to rely on that tech, and the claustrophobia and isolation that would cause.” 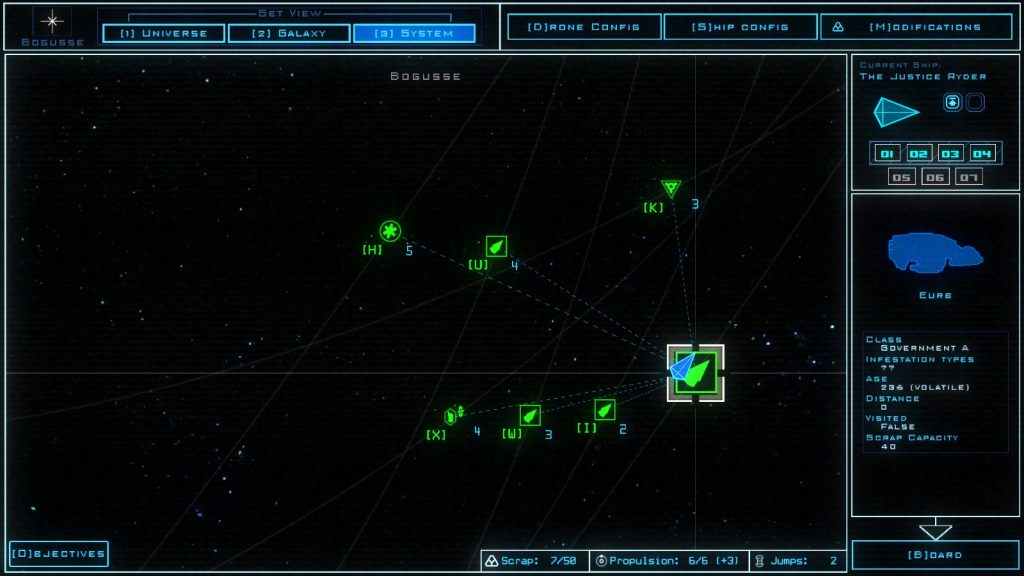 Every single one of these ships is devoid of its original crew. Every one is deadly.

He’s not wrong, and Duskers is an interesting game that somewhat defies easy genre labelling. But hot-damn, am I grateful the difficulty is so customisable, because with all the options on, it’s tense, and death, or rather, being left without your drones, is quite easy.

Storywise, it’s simple: You are possibly the last human being left alive, and you want to both survive… And know why, how it happened. All you have is a small drone salvage ship, with a (mostly) full complement of drones, and your wits. Good luck with that!

What this means, however, is that you are controlling a variety of drones, none of which see overly clearly, through an easy to learn text interface and HUD. You can directly control the movement of a single drone with the arrow keys, but for everything else, it’s commands like “Navigate 2 r4” (Move drone 2 to room 4) or “Motion 1” (Use drone 1’s motion tracker, because another drone I brought along also has one), with some easter egg messages available using the “Run” command (For example: Run twirlygig)

Most of the time, this isn’t a problem, and the game is like a puzzle. But the older the ship, the larger the threats that loom, and the less time you have to react to them. And often, it presents you with tough and interesting decisions. For example, spacing threats is, especially with radiation turned off, an option… Once you’ve discovered them. And there are three and a half ways to discover a threat: Motion trackers, which don’t always work; Sensors, which require you to place them; Stealth, which doesn’t always work; And, of course, them discovering you. Which is bad. Very bad. 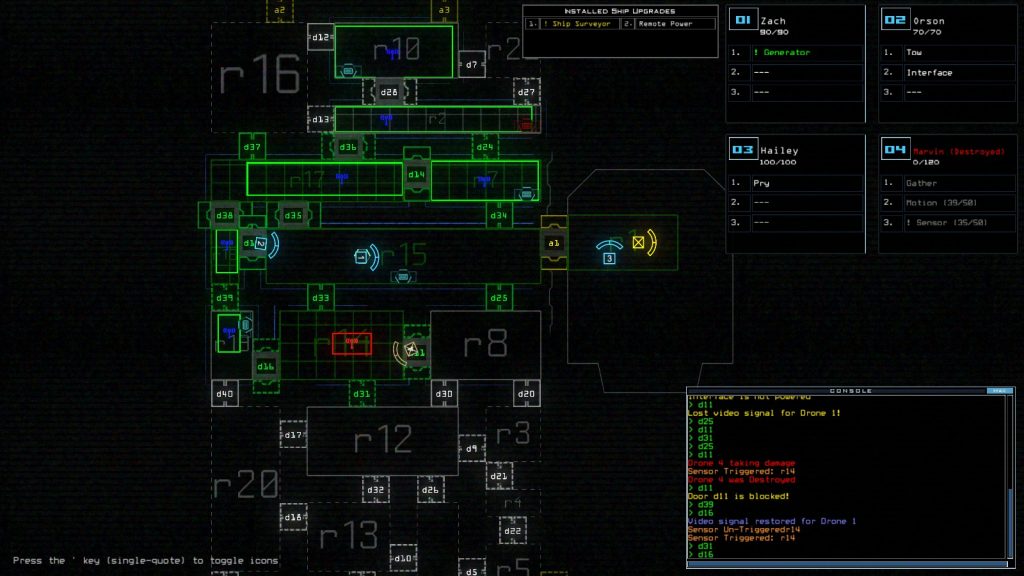 Map view, where we see some sensors, the sensors picking up someone bad, and the remains of one of my drones. SOD.

At the beginning of the game, you will have, at most, two and a half of these options. And maintaining all of them once you get them is asking for a “Reset”, which, on the one hand, keeps your objective progress and logs collected. On the other, it puts you back in the original ship, with starter drones, and the threats discovered remain as well.

If a ship is cleared of enemies, it can be commandeered, sometimes allowing for greater Scrap storage (The currency of the game, and the only means of keeping your upgrades active for more than a few missions at a time), more ship upgrade slots (Which give you more responses to situations), a few ship specific upgrades (Such as the Military Ship’s cannon, which will kill everything in a room… At the cost of permanently opening it to space), and better fuel storage (Allowing you to travel further without jumping to another system.) There’s also a lot of options, and all of them have a help command that explains their function. It makes for a lot of choices when you get a good run going, and it’s interesting to see the developers do a lot with a little.

However, that doesn’t mean the game is perfect. I’ve often said no game is, and there are things that could possibly be worked on. The reset option takes a lot of the sting out of failing a boarding, losing nearly everything, and that’s a good thing… But it, along with the procedural nature of the universe, means the game slows down a fair bit when you get to the third or fourth sets of objectives in the various disaster questlines, due to needing specific tools or places. Right now, for example, I have to find a specific class of ship, with at least the “pry” or “teleport” tools, preferably a turret and some mines, and destroy all threats within it without turning the ship’s power on. Even if the ship is found, that’s a fair bit of setup, and you can only visit a ship once. 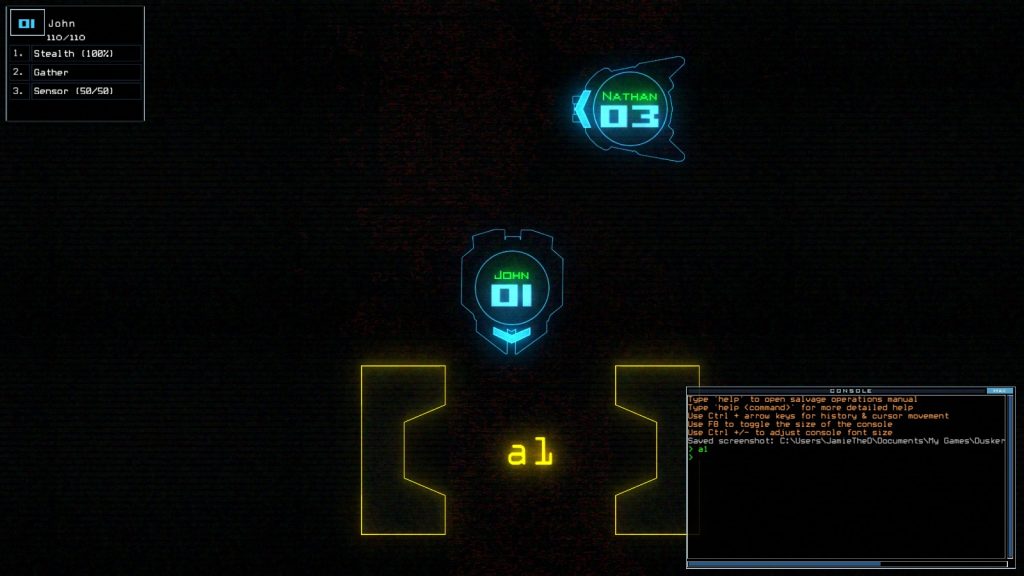 Similarly, there is no colour blind support for this game, as, while most of the drone colour schemes are thought out nicely, some make the drones unplayable, perhaps even to folks who see colour better than I do. Dark brown on black, for example, is a terrible idea, and dark red on black, similarly, isn’t great. Thankfully, those are relatively rare, but it would be nice if they’d vanish entirely in a later patch, for the sake of everyone’s eyeballs.

But, while you may be thinking that graphically, this doesn’t look like a whole lot for £14.99, there’s a lot under the hood, and I find myself coming back to it, wanting to know… What red button did they push? Was it machinery out of control? A super AI? A galactic war? Maybe they found something that somehow killed us all on its lonesome? What’s the real secret?

So if you like procedurally generated games, mysteries, puzzles, and a little bit of existential horror, perhaps give this one a go. It seems barebones at first, but there’s definitely some interesting things being done with this game, such as allowing you to continue the story even if you “died.” And, when you think the mystery’s been solved with this one, try a clean save, see if it’s any different. I ruled out Grey Goo, for example, let me know if you did too! 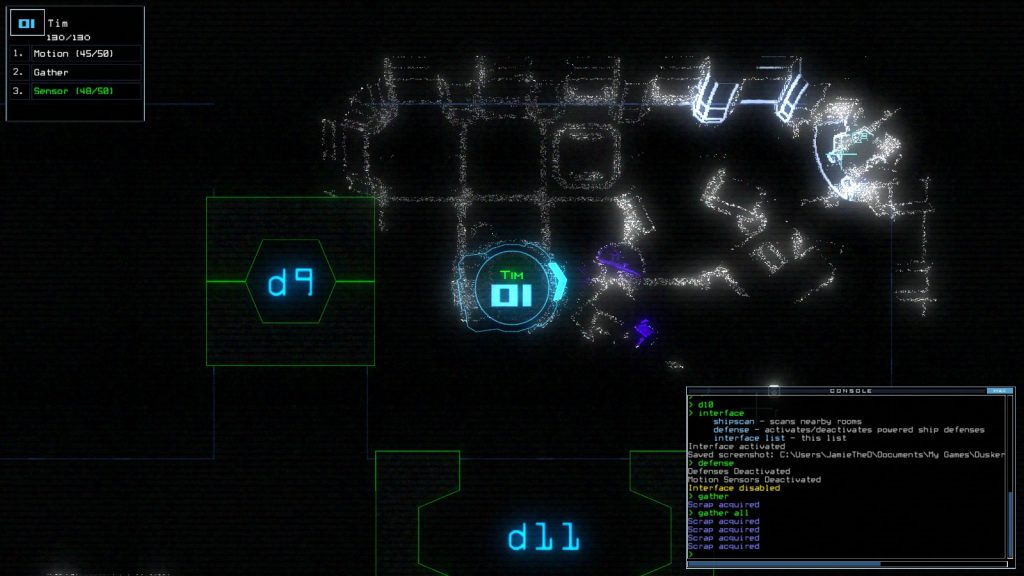 Tim took out its electronic frustrations before a security bot did the same.

The Mad Welshman sighed as Abby’s microphone picked up the telltale synthetic drone… Checking his shipscan, he grinned. The room was worthless, and bordered on an airlock. “NOT THE BEES”, he cried with glee as he violently flipped the “LOCK OVERRIDE” switch.