Source: Cashmoneys
Price: £8.99
Where To Get It: Steam

This review took a while because, at first, it’s somewhat hard to see what the problem is with Dungeon Girl. After all, how complex, or intricate, or messy could a game really be, when its main game loop consists of clicking on groups of same-coloured blocks to remove them, and other blocks fall down? 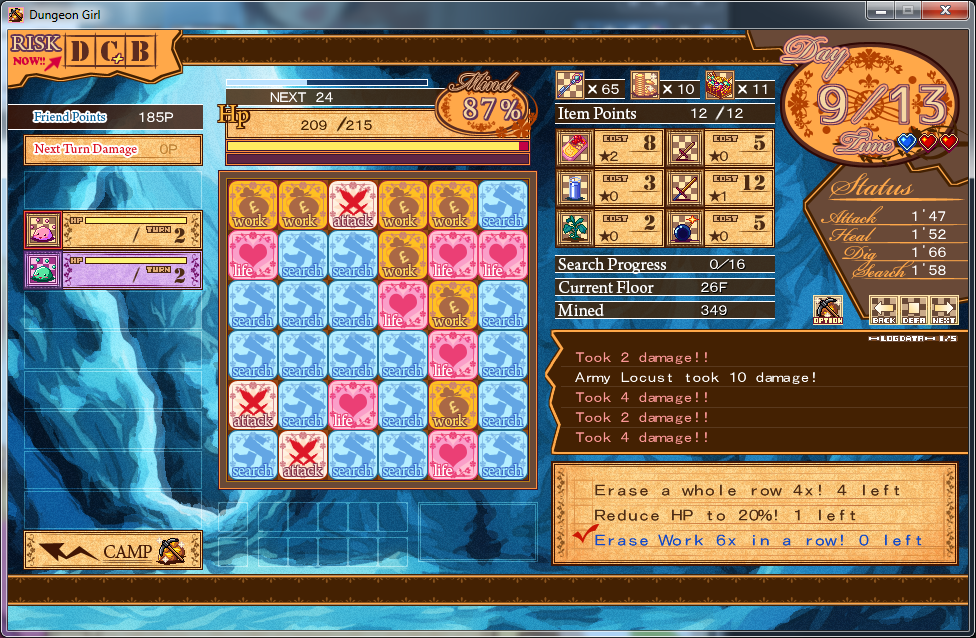 Looks p. simple, and the main action (clicking on those blocks) *is* . Everything else? Nooooot so much…

As it turns out, a fair bit. So let’s get into Dungeon Girl, in which a dungeon explorer for the Kingdom explores dungeons, albeit not in the fashion many are used to.

Dungeon Girl is, simply put, a block removing turn-based game with RPG mechanics. There are several kinds of blocks, but the most important (and common) are Life (Heals you), Work (Digs out ore), Search (Finds the exit to each floor), and Attack (Does what it says on the tin.) More blocks of the same colour make for a larger effect, and if one or more rows of the grid are filled with a block-type when you remove it, this has another extra effect. 200 dungeon floors, bosses roughly every fifteen floors, stairs roughly every 5 floors, and if you get damaged or your Mind meter goes to 0% , you lose that exploration run.

What’s that? I didn’t mention Mind? Are there Mind Blocks? What are these RPG mechanics? Well, this is where it gets a little complicated. Yes, there are Mind blocks, uncommon as they are. There are also items that heal mind. There’s also quests, and item mixing, and an item encyclopedia, and support members with their abilities and skill grids to put Friend Points in, and… Oh, your eyes are already glazing over. Yes. Mine did too, until suddenly some of these things become important. While others… Don’t. So much. So far. This, readers, is the problem here. It’s a game whose core game loop is simple enough, but everything surrounding it isn’t. And not a whole lot of it feels very useful, whether it is or isn’t. I can, for example, affect the tile drop rate by changing my Adventurer Type, unlocked by specific Friend Point tiles on their skill grids. I can also unlock their Stories, little vignettes, and extra HP, and Treasure Keys, and… 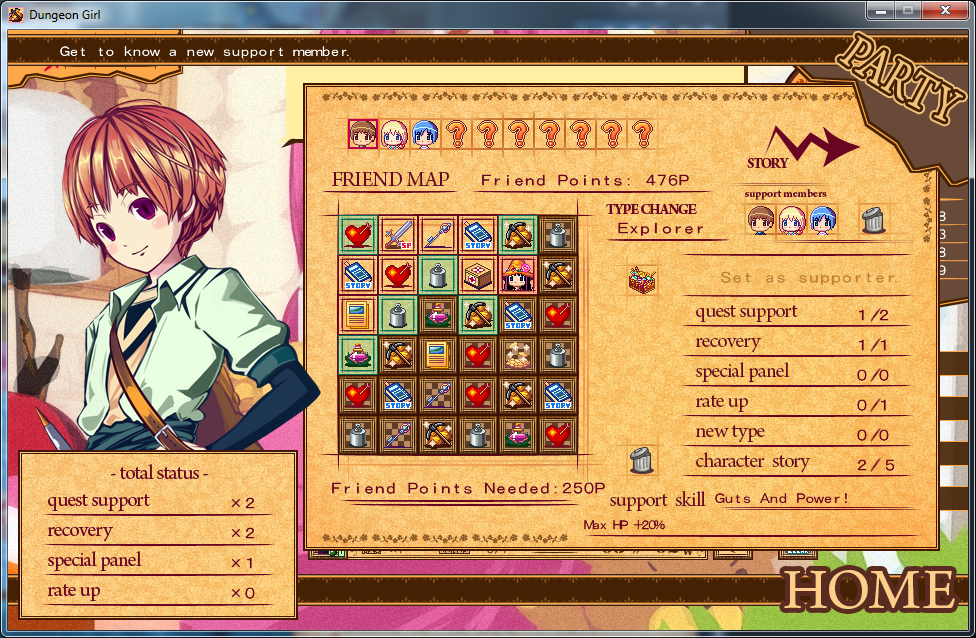 Yes. Yes. This is definitely a skill square. Those are definitely words, and abilities, and rising numbers.

…And while a fair amount of this is explained, not all of it is explained well, and so I’ve shied away from certain features because I genuinely can’t grasp their utility. These Object Points are good, huh? How do I… How do I get more of them? What does that actually do? I have Nono’s Bento at something like +4 , with 7 of them, at 0P. Looking at the help explains it a little, but I have 7 Nono’s Bentos, a +4 that doesn’t seem to do anything, and no bonus (the Help tells me it’s because I haven’t got enough of Nono’s Bento to unlock said bonus.) As such, mixes have largely been left the hell alone in my playthrough, and types left unchanged. Nothing seems to have suffered as a result.

But how are these items gotten? Treasure chests. Which require keys. Which require either unlocking skill grid items on party members (Considering how quickly the Friend Point requirement for the next grid item rises, this is not a preference) or Quests. Quests refresh every ten game days (three moves a day) in a dungeon, and, while some are perfectly do-able (Remove X blocks of Y type, Remove X blocks in one go of Y type Z times, Don’t Get Hurt for X turns), others seem, at best, counterproductive for their gains (Reduce yourself to 20% HP! Fight 5 enemies at once!) and others a matter of luck or speed, rather than skill (Fight X enemies, Fight Y rare enemies.) There’s conflicting elements here, and while choosing between them adds to the difficulty (because treasure chests can only be opened with keys), some seem particularly silly. Use X stairs? Er, yes, because I really want to be going deep quicker when my attack isn’t actually good enough for five floors down right now.

Dungeon Girl started somewhat enjoyable, a little confusing, a little popcorny, and I can see how folks who gave up on it early disliked it for “simple” gameplay. Over time, though, I’ve grown to dislike it because it’s not simple. It’s a hodgepodge of systems that aren’t terribly well explained, with elements fighting each other over how you should progress using its “simple” game loop. Which is less simple because that hodgepodge of elements seems to be affecting, behind the scenes, how well I attack, or the like. To the point where even explaining why it feels like a hodgepodge has turned this review… Into a hodgepodge. 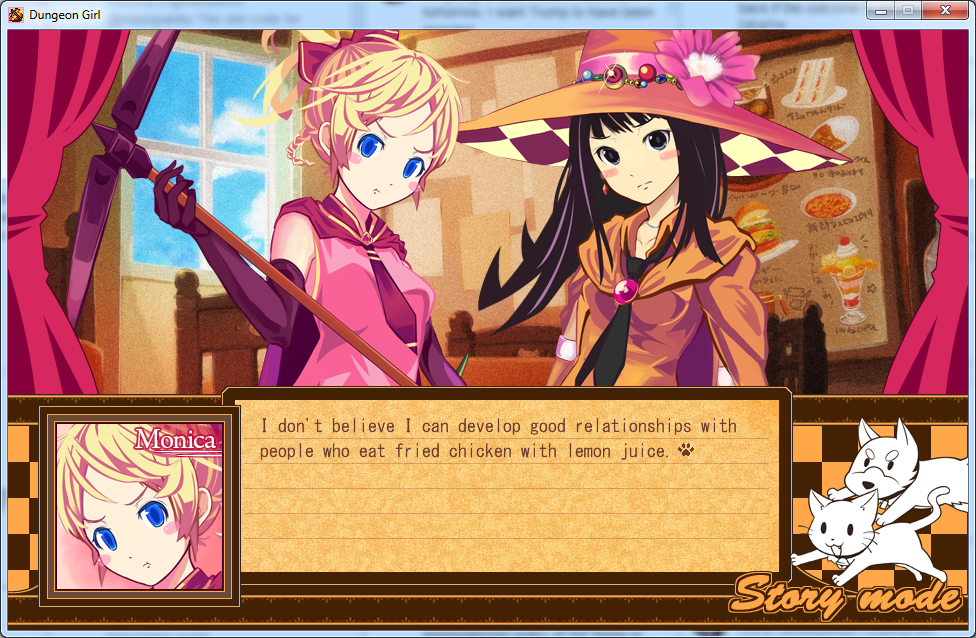 While this ends well, I can’t help but feel this isn’t a good way of going about things. Also, I like pineapple on pizza.

The Mad Welshman loves tooltips. But tooltips, as he’s found elsewhere, are of little use when you don’t know the tooltip is there.