Defect is possibly the oddest premise I’ve seen for a build and fly game in a while, but before we begin, like the game, I’d like to make clear which version of the word the title’s using. You’d think, considering the “Spaceship Destruction Simulator”, that it would be as in “Problem or flaw”, but no, it’s actually “Join an opposing side or political group.” Because that’s what your crew does. Every. Sodding. Time. 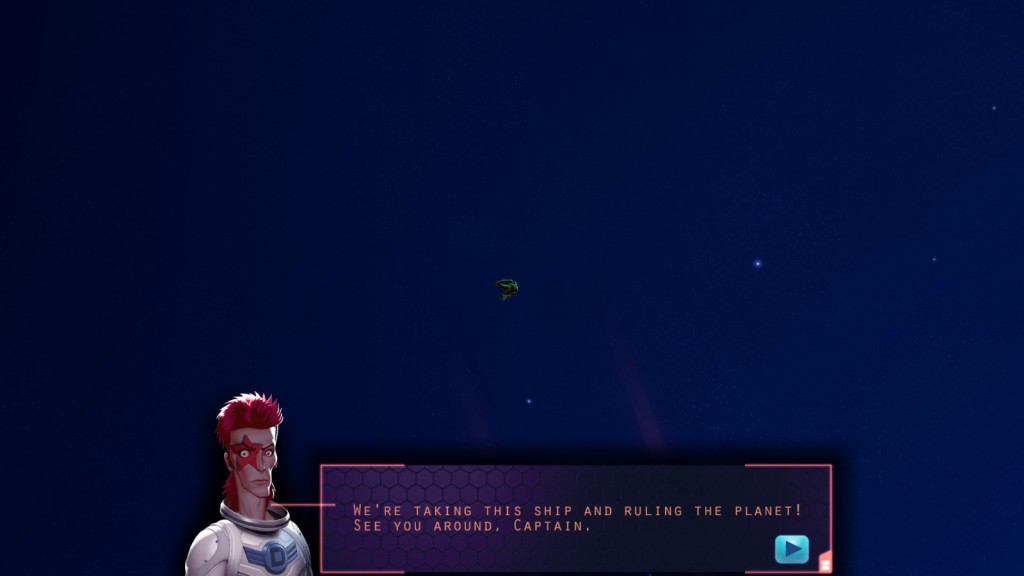 It’s amusing the first five times it happens. Then you get horrified. What kind of civilisation encourages such disloyalty? Then you just get plain angry. How dare they steal your… Okay, for the first few missions it’s not going to be a sweet ride. But part of the difficulty curve is that you’ll be going up against that ship you built last mission in among the others. It’s an interesting idea, but I’m kind of hoping it’s got a little more nuance than the same set of events each time. “Oh hey, this is now the most powerful ship in the sector! G’Bye Cap’n, we’ll put it to good use!” “Oh… Well, surely that won’t happen next time, huh?”

I’m thinking of defecting myself, engineer lady. It comes from working for a navy that’s obviously a big shower of assholes, the way everyone keeps mutineering. Speaking of, why do they keep letting Crewman Bowie back into the Navy? Why do I keep letting him back onto my ship?!?

Well, okay, we all know the reasons, but still… Everyone in this universe is dumb. But is the game?

Not really, no. The main variation is in what you can build, which increases after each mission. Good example, after I’m done with the tutorial missions, I finally get a shield. Which, unfortunately, I can’t use without some other facet of my ship suffering right now… Like decent guns. Or steering. The UI, and the music, are nice and minimalist, and I do like the caricature designs of the characters who, variously, advise and annoy you. The one problem I have right now, though, is a bit of a weird one… 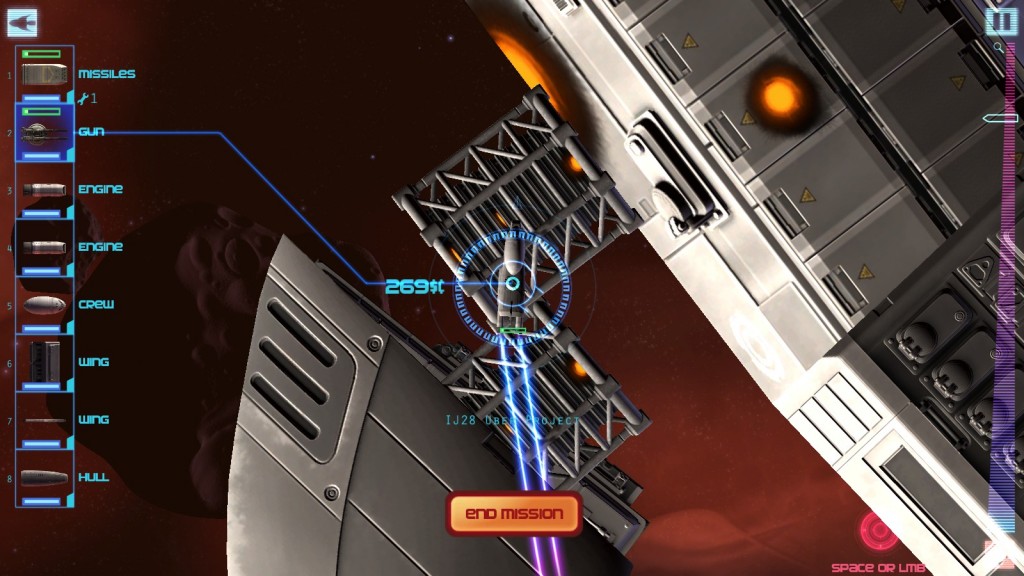 Take a look at that zoom meter on the right. That will give you *some* idea…

…The maps are too big. On the one hand, this is to allow the frankly huge designs you get later in the game, and fight pretty early on. But for at least the early missions? You’re quite small. And that means you don’t really get to see your ship in action, except as a tiny thing on screen, shooting at other, possibly as tiny things on screen. An automatic zoom helps with this, but it unfortunately doesn’t help that much in the early game. Also not helping is that you are very limited by your Core, and you have to work with that, which becomes… Very fiddly. Seven or eight missions in, and you’re going to wish you had something better. Which leads to the other problem… It’s not very balanced right now, and it seems like you’re pretty much expected to grind missions you’re good at so you can have the equipment to deal with those you don’t. Good example, the game is reminding me why I hate escort missions.

“Oh yeah, defend this freighter against some pirates, and… OH NO, TORPEDO BOMBERS.” Fuck. You. My choices at the time this mission comes up (And three others of its ilk) are something nippy and tough, but with next to no firepower; something able to turn on a dime, but with only forward firing weapons (Because turrets take up more crew than I’m comfortable with); or something that shoots well, shoots in many directions, but has armour thin as tissue paper. This is about where I got frustrated, because everything currently needing work starts giving you a kicking, like a schoolyard bully and his mates. The camera wants to encompass as many enemies as possible, so you have to fight the auto camera to avoid the torpedoes, which will kill you in one, maybe two shots. The game’s preference for forward firing weapons means you have to fight the steering of your design, and the fact that nearly everything is faster than you, because the engines aren’t quite balanced, means that you’ll die… Again… And again… And again, because you can’t quite build something useful. 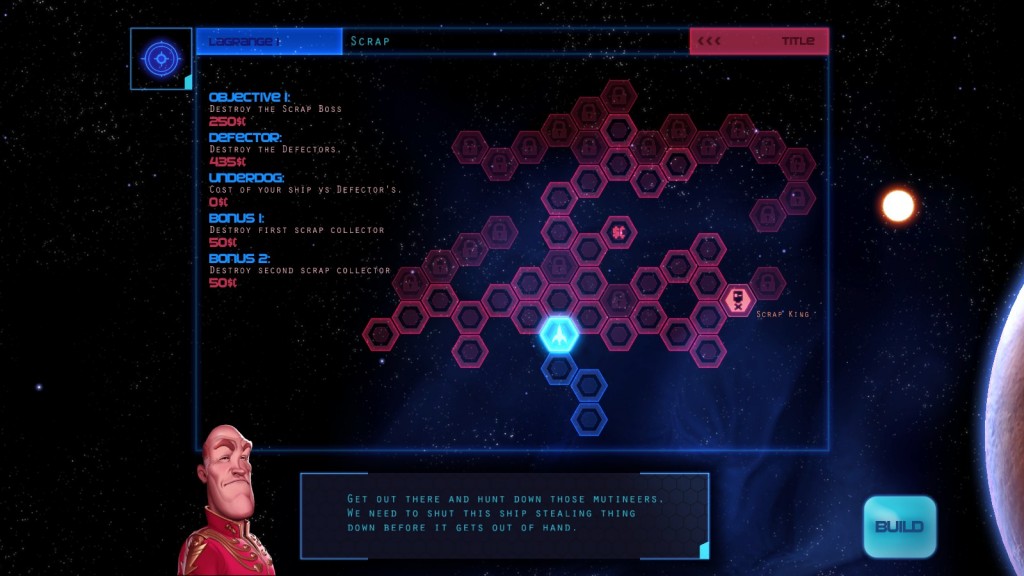 Yeah, um… Good luck with that!

Then you go back to grind, and realise most of the rewards up till now have been mission rewards. So your rate of new equipment slows to a crawl.

In summary, while Defect is definitely interesting, it’s looking right now like it might be a good idea to wait and see. The mission requirements definitely outpace the equipment right now, the camera needs a bit more work, and it gets frustrating once you’re out of the tutorial. It undeniably has its cool moments, it’s UI is pretty nice (Although Symmetry mode, also, needs some work), and I kinda like what’s going on with the visuals. Thankfully, it’s a pretty early version (0.12.22076), so there’s plenty of time for the devs to balance things, and fix hiccups.

The Mad Welshman sighed as he tumbled through space, waiting for the pickup. You’d think, after the 253rd time, that he’d remember to lock the bridge door.