Source: Cashmoneys
Price: Planned to be free to play, but Early Access buy in ranges from £30 to £72. Microtransaction currency £6 and up, and yes, you will end up with spare currency.
Where to Get It: Official Site
Version Reviewed: CB 0.3.4 (Jan 16, 2018)

Monster hunting is fun. And honestly, up until the announcement of MonHun World, there really hadn’t been enough of it on PC. So when I was informed of a game that’s planned to be Free to Play, with an Early Access buy in, I bought in. 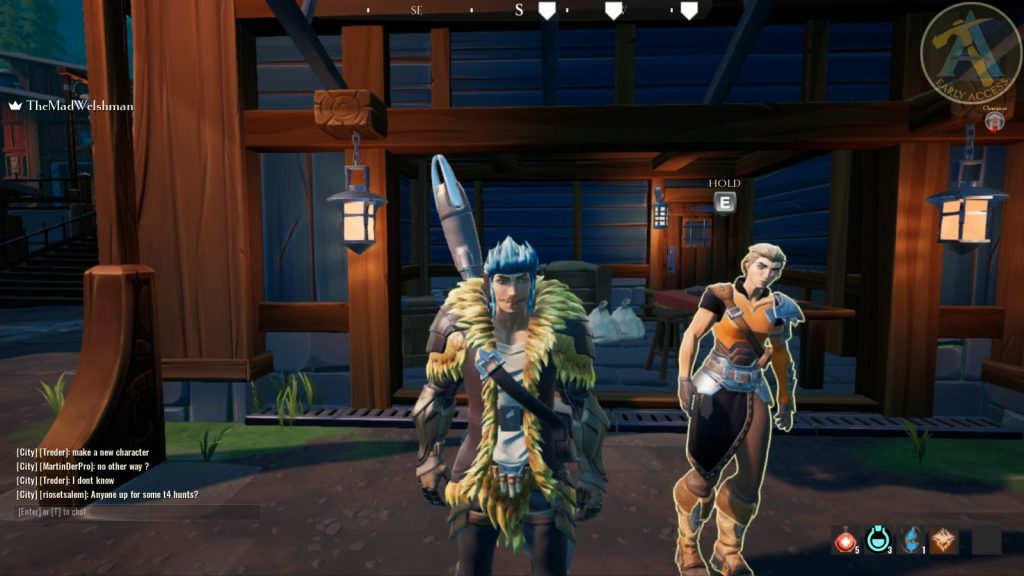 “Er, why are you posing?”
“For the invisible people watching… Aaaaalways watching…”

What I’ve found has me conflicted. Dauntless is, at the present stage, a very streamlined game, almost minimalist. But also with the second currency (The F2P’s main income) already implemented and balanced around. It’s… An odd feeling. Let’s start with the actual hunting.

Actual hunts are very simple: You sign up to a hunt, either waiting for other players, playing with friends you have or have made, or going solo. Up to five minutes later (plus a small loading time), you’re dropped onto a floating island, for lo, part of the world is that everything is floating islands, and you’re only hunting monsters that get too close to the settlement of Ramsgate (Or so the quests would state.)

There are three things on the island: Resources (One item per resource spot, for potions, lanterns, and other useful gubbins you’re going to need), goats (Contain, as with resource spots, one item, but can also ram you if you annoy them), and the Monster. Monster Hunter fans will already be scratching their heads: Wait, what about areas? What about wildlife, what about? 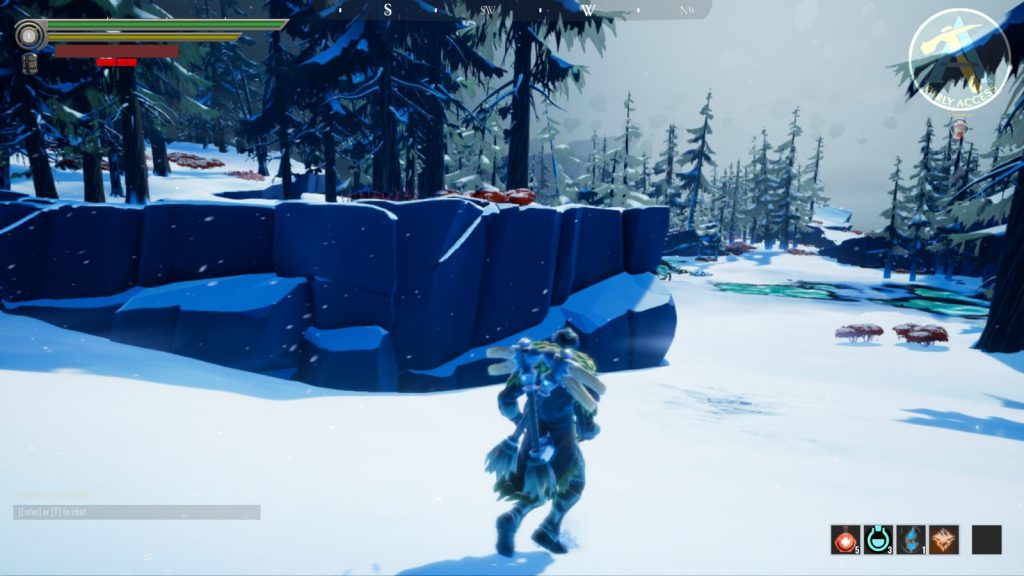 The current wintery aesthetic of the floating islands is perhaps apt, considering…

Nope. You (plural or singular.) And the monster. Ramsgate is filled with people to talk to, quests to consider, things to buy or make, but once you’re there, it’s you and the monster. Successfully kill the monster in the 30 minute time limit, and you get resources, especially if you broke parts from it. Fail, and you get bupkiss. Nothing. Zilch. And you’re out of whatever resources you used. There are plans on the roadmap to make the world a little more thriving, but that’s very much a wait and see thing.

It’s a little more than that, of course, as you have, at the time of writing, five weapon types to choose from, but this minimalist approach is what sticks out the most with Dauntless. That, and the resources. Streamlining, similarly, has hit Dauntless’ crafting, and nearly every monster based item requires precisely one kind of resource, that only drops on the “Normal” (read: Group recommended) monsters: Their skins. Or nails, or claws… What’s important here is that it’s a single resource, and, generally speaking, you get up to three of them. And if you don’t get them, you get Archonite, some mysterious, Plotanium substance that is also used in crafting, er… Everything of substance, from weapons, to armour, to lanterns with special abilities.

This, in essence, is its biggest problem, really. In a real sense, it’s too streamlined, to the point where hunting the monsters in question is so very core that it’s the be all and end all, and for that to be sustainable, the monsters have to stay interesting, or players have to be moved onto new monsters, new experiences, quickly. 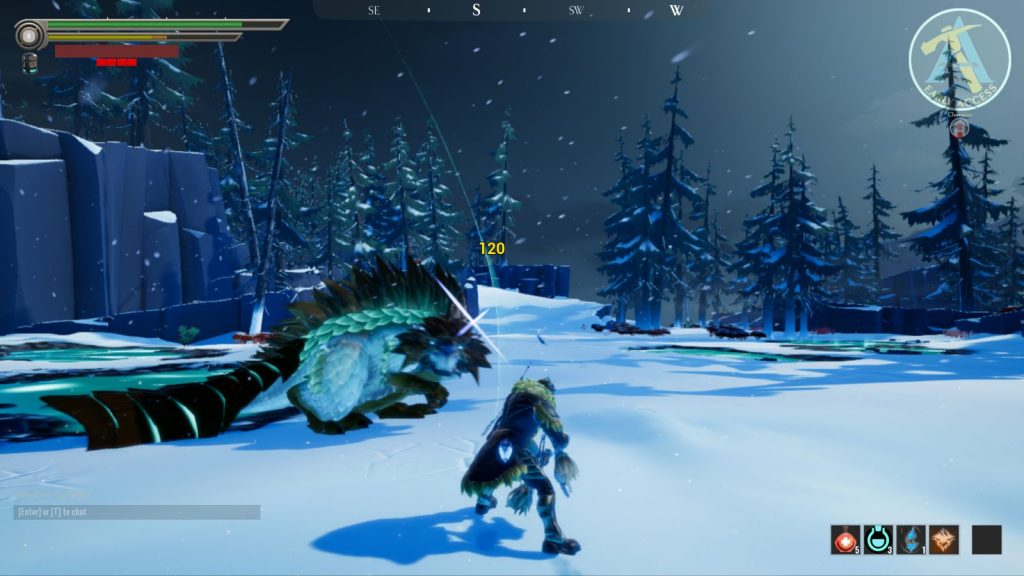 On the one hand, the mid poly aesthetic works for the game. On the other DAMMIT I AM WHIPPING YOU IN THE FACE, REACT!

Sadly, neither happens. It’s interesting to compare with other monster hunting games, because it’s taken me a few hours to move up to the next tier of armour, whereas elsewhere… That few hours, I’m usually a few armours in, and experimenting. Once the parts from a monster have been hunted, well, going back to them feels a bit pointless, and once you know their tricks, there’s nothing in the world to add spice to the fights, with combat feeling limited in impact. Sure, numbers come up, but staggering is an occasional thing, interrupting rush attacks a matter of excellent timing on a heavy attack (even then, you may get damaged), and…. Well, the fact that once a creature’s armour and weapons have been crafted, there’s no incentive to come back feels part of why, with the “weaker” monsters, I have trouble finding folks to fight them with.

After a fairly early point, yes, finding folks to fight them with, or, more accurately, divide the monster’s attention is pretty much mandatory. When they hit, they hit hard, and learning weapons becomes a pain when you have a triple hit point jump between the first hunting area and the second. As such, having someone, anyone else to lighten the load feels extremely important, if not, as I’ve said, mandatory. 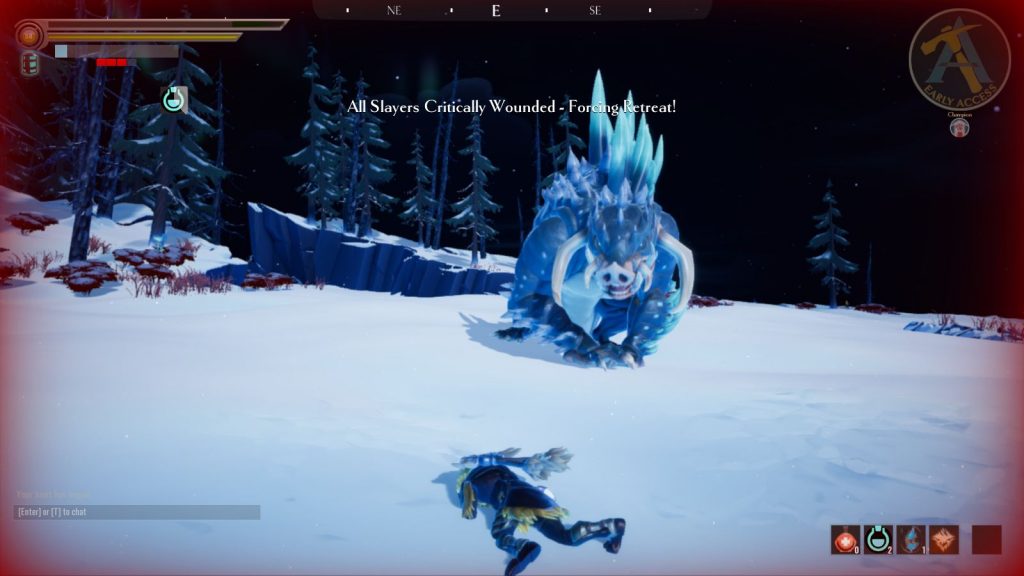 Hunting solo, unless over-equipped, is a very bad idea. This will be your inevitable result. And no, you get jack and squat for collecting things beforehand.

Right now, Dauntless feels like it’s in an awkward place right now. It’s trying to streamline, but not all of that streamlining is good. It’s free to play, and as such, has microtransactions to feed it once it’s out in the wild (As well as, during Early Access, Founders Packs of three tiers), and, minnow that I am, I’m genuinely not sure how impactful they are right now, but the grindiness is definitely there. The worlds are an interesting idea that works with the Monster Hunting genre’s general map design philosophy, but currently feel rather empty, with little beyond need to recommend exploration, and the monsters… Well, they’re there.

The Mad Welshman doesn’t have a lot to add this time. He’s busy recuperating from the porking he got before the review.