I love me some Lovecraftian fiction. Yes, he was racist as hell, and a lot of his horror stories were based on that, but they’re enjoyable nonetheless. Similarly, I love me some fictional jingoism. Real life jingoism? Sucks. I mean, you only have to turn on the news to see sabers being rattled to see that. Finally, I love me some Steampunk, despite the fact that, often, it’s classist as hell. You rarely see the working man in such settings, only the rich idle going on adventures. But it’s an interesting aesthetic done right.

As such, your first instinct, considering Clockwork Empires contains all three, would be to say that I like this game. Eeeeeehhhhh…. Sort of. It’s like a banana-curry-chocolate cake, in that it contains things I like, but the whole? Not so much. Let’s start with the fact it’s somewhat unfriendly to new players. 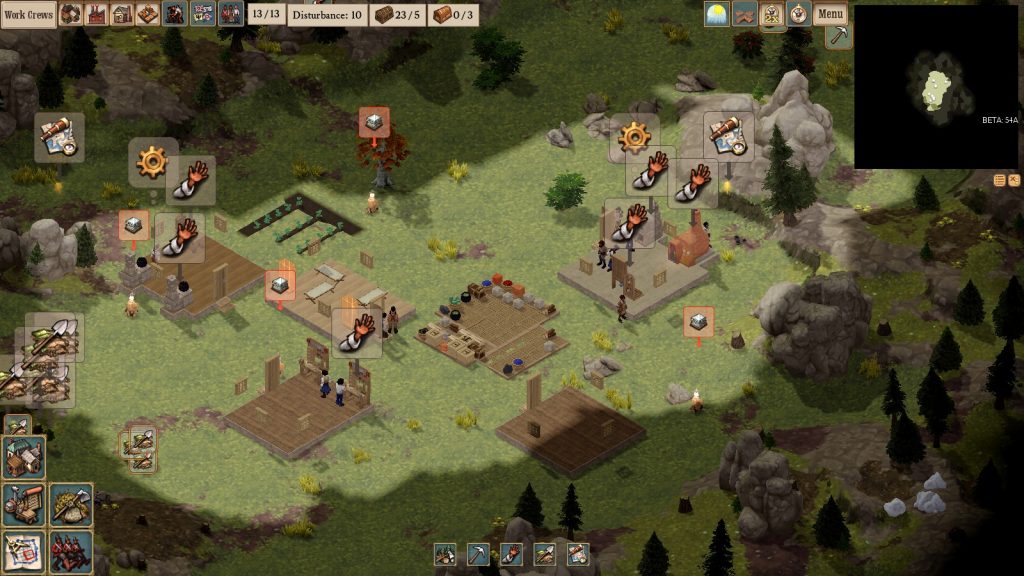 There’s a lot going on here. Not a lot of it is explained well.

Now, yes, before you say anything, it’s a survival strategy game, those tend not to hold your hand, but while the tutorial does indeed teach well (This is your early game order, etc, etc), the UI… Needs work. For example, you may wonder, if you play the game, how to stop seeing a farm’s statbox. Farms are, apparently, offices… So it’s the office button next to “Work Crews.” Some things work just by mousing over, such as the population and food button, others stay up until you left click the “Cancel” button that appears at the top, and there don’t appear to be keybindings in the Beta of Clockwork Empires.

Basically, it’s busy, it’s not very well explained, and as such, it makes a game in a genre that’s already quite slow even slower with all the pausing I’m doing. On the upside, the people are fairly readable. If they’re clomping around, they’re particularly annoyed. If they’re doin’ the Strut, they’re happy, if their heads and arms are down, they’re sad, and if their arms are waving and they’re on fire, something has probably gone wrong. Y’know, as it often does in such games. Of course, all that stops when they actually start a job, which is a shame… But at least you have some warning.

Visually, it’s much like the UI: Busy, lovely to look at in places, but not overly readable as a result. This, by the way, is nothing to do with the colourblind function (Which is a nice touch), but just the sheer amount of things and textures on view, and how a fair amount of it actually is useless. Add in the houses and workshops, and the fact that you can’t click on colonists “behind” them even if you have the walls off, and you start to have problems. Happily though, the music is fairly calming, and helps lower the irritation factor. Somewhat. 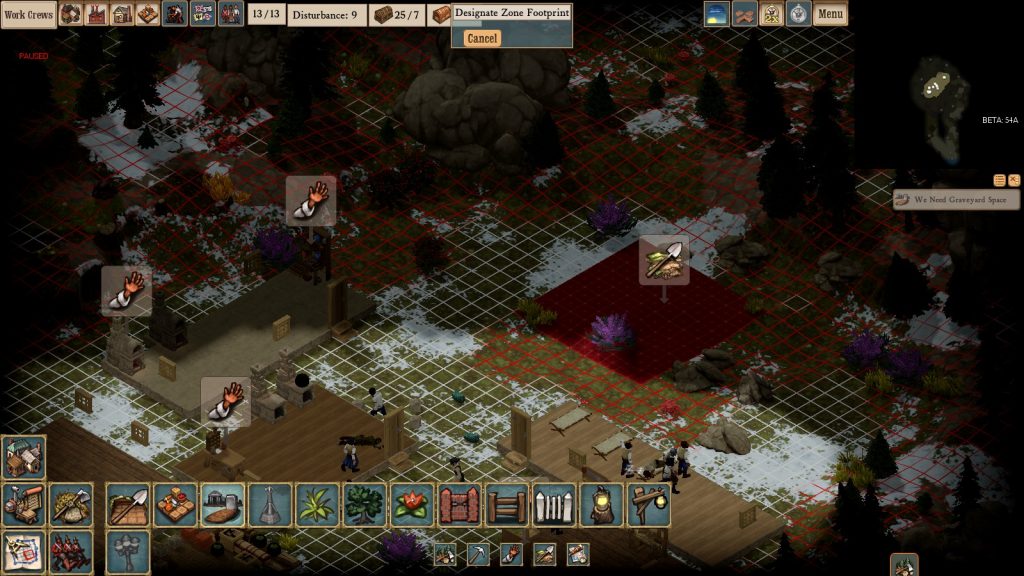 In any case, as you might have guessed, the game is all about tough choices. Day 4 of my colony saw a bandit group incoming, and I was several days away from a Barracks for soldiery. I was a few weeks away from giving them decent weaponry. So I decided to let them raid a little. In other games, I made friends with fishmen (Which is bound not to go sour when home finds out, eh?), discovered an ancient idol, and had a meteor from the moon disgorge… Something. Which thankfully, was beaten off by a warlike Overseer with a stick.

Of course, being a complex game in Early Access, bugs are bound to happen. One to watch out for currently is the infinite workshop job bug, where having more than one workstation in your workshop with the same job can mean that one job correctly registers the job being done, while the other… Doesn’t. In the case of “Minimum X of items”, this can mean you’re building planks forever and ever, whether you need them or not.

I feel kind of sad, actually, because there’s a lot of interesting events, and yet… Bureaucratic bumf and a flawed system bar me from getting to those interesting things. For example, I currently have a bandit corpse lying in my kitchen (Most unsanitary, I think you’ll agree), and yet… I can’t build a graveyard because it has a set space requirement, and nobody seems to want to flatten the terrain. Being a pastiche of Victorian Brits, the workers take a break at tea-time, do not burn the candle at both ends, and, once assigned a job, seem to pursue it with a single mindedness that bars common sense. And, of course, when it rains, it pours, as a day later (Corpse still there, ground un-flattened), the grass and rocks start singing eerily, which may have nasty effects if I don’t clear the ground nearby (A different job in and of itself.) This, basically, is to do with the Overseer system. Rather than have jobs be individually between workers, there are Overseers (Who pick what job there is) and Labourers (Who are assigned to Overseers.) 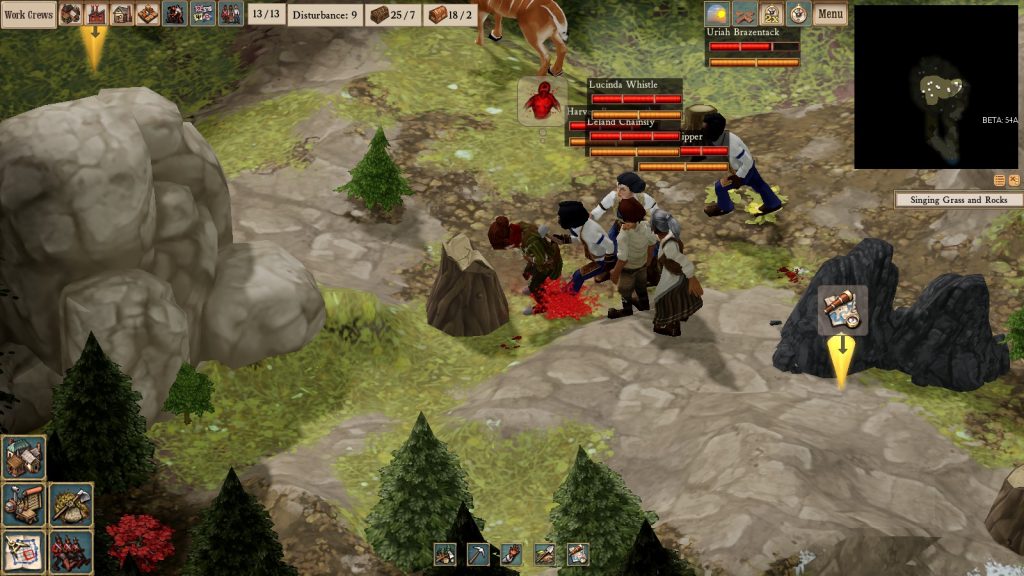 Bandits and Selenians. The only time I’ve ever seen a colonist attack something rather than gesture angrily at it.

It’s a very management heavy game, even for a strategy survival game, and, honestly? It’s leaving a bit of a sour taste in my mouth, as everything appears to be going wrong. A little late, I realise… Oh, yes, becoming a Workshop Overseer disables all other jobs. A rhythmic “Whud… Whud… Whud…” floats across the colony, mixing with the sound of flies buzzing around a corpse, and the eerie singing of rocks and grass. It’s the morning of Day 8.

In the afternoon, a bandit raid occurs. In the evening, a grimoire is uncovered while trying to make room for the graveyard. Ohhhh boy…

Right now, Clockwork Empires, sadly, feels clunky, unintuitive, and unfriendly rather than challenging. Which is a shame, because I’d like to see more of these strange events and cool things, but the game itself seems to be resisting any pace above plodding with some very hard limits on what can be done, and a lack of useful explanation for many of its systems and trees. It doesn’t help that some systems appear to have more than one “method”, and it’s unclear which works (Is hunting via the Naturalists’ Office, or via the Hunting labour? And are we not able to hunt before we achieve some sort of iron ranged weapon and the ammunition at all? I wasn’t able to find a clear answer.) 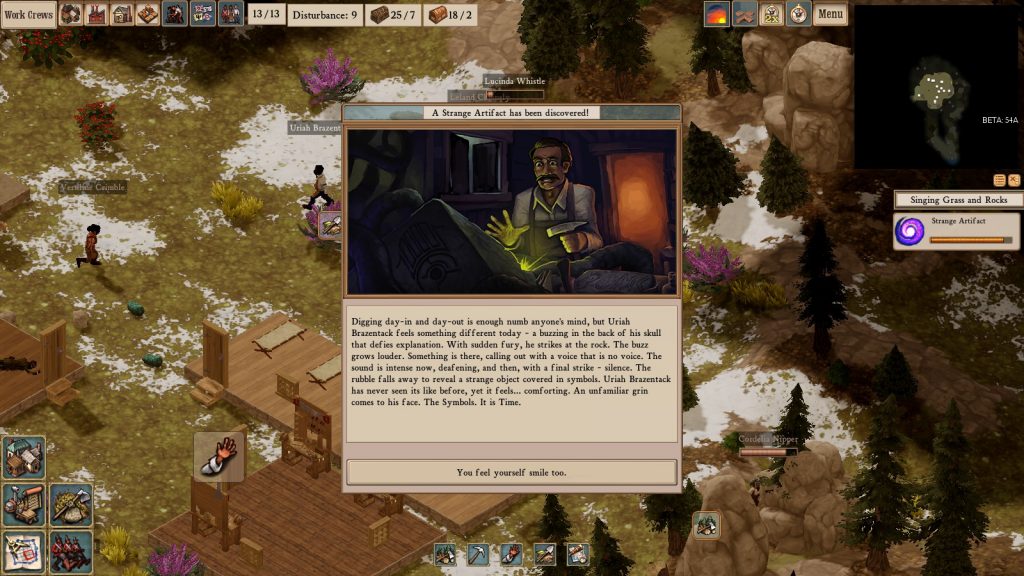 Cue nothing happening as a result of this. No, really, it’s still there, in the graveyard, an in-game fortnight later.

The Mad Welshman sighed, understanding why the jolly old bureaucrat at the Foreign Office was so delighted to send him on this job. He whiled away his time thinking of synonyms for “Feckless”, “Moaning”, and “Children of Low Breeding” these days…