There’s a fine line between challenging, and dickish design in Future Racing. And it depends upon a lot of factors, including handling, how responsive the controls are in the first place, track design, enemy AI… It’s a long list. 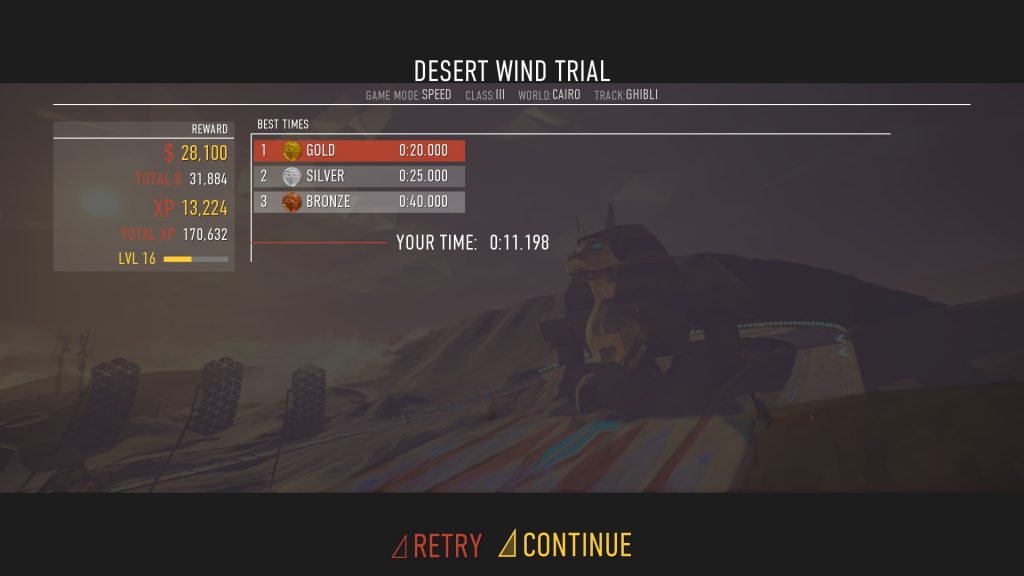 Sometimes, I scare myself. To be perfectly fair, the track helped scare me.

RedOut, I’m happy to say, definitely seems to be hitting the sweet spot for me where I’m earning my Gold medals, but not struggling for them. And good gosh, it feels good. It especially starts to feel good once you’ve got a feel for each vehicle. In fact, as the screenshot above shows, once you truly get a feel for a craft, it can get scary.

So, let’s get the bad out the way first… This is only just Future Racing newbie friendly. And I say that because, once it hits about the middle of the Class 2 events, the gloves really start to come off, and there are some bits of unclear track design. Looking at you, Abruzzo and your Tube of 50% Racer Survival Rate. Overall, though, despite speed filters, EMPs fuzzing up your view, all sorts of effects that serve to both pump up the adrenalin and make racing anything from the middle of Class 2 one long, extended cry of “OHHHHHSHIIIIIIIII-”, it’s fun, the difficulty curve isn’t too bad, and the AI rubberbands just enough that you can beat them with some moderate screwups, but you’re probably never going to lap them, and a major crash is going to set you back at least a couple of places… More usually 5 or 6.

Still, that aside, there is a lot to be said that’s positive about RedOut. The visual design is sumptuous, with high variation in the tracks (From Cairo’s deserts, to Alaska’s ice-floes, to Abruzzo’s forests), the craft (From the Sulha’s almost Pod-Racer like design, to the alien curves of the Asera, to the scrappy Jet-Junkers of Conqueror Technologies), and a UI that doesn’t distract from what you really should be paying attention to, the track. The tracks are, for the most part, highly readable (With the exception of a few tunnels like in Abruzzo), and the sound is equally variable and classy. Sometimes, there’s pumping beats, others, guitar riffs galore, and it’s very clear when someone’s nudged you, you’re scraping a wall, your turbo has fully charged, you’re using your turbo… It’s well planned, and I applaud it. I equally applaud the fact that 34 Big Things have gone for relatively low poly models for the craft, as… Well, it fits! 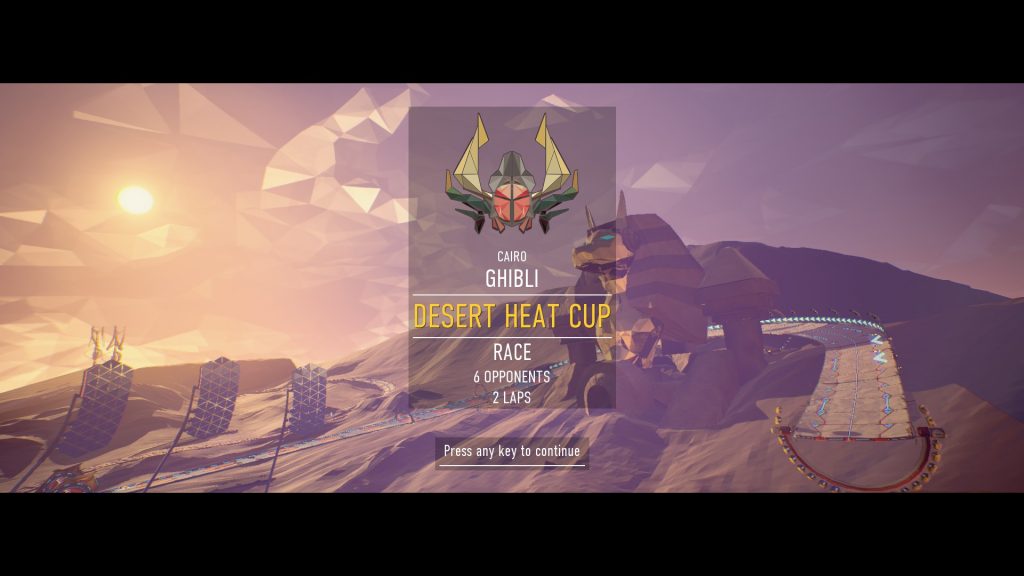 Now, while the game does have multiplayer, alas, it doesn’t seem to be terribly busy, so it’s very much a case of “Host your own when friends are around”, but the Campaign… Does interesting things. You can see it trying to engage you, and get you to experiment. Fly with this ship for two races, it will occasionally say, and we’ll give you money. Win a race with this one, with this loadout, and we’ll give you that powerup. Don’t change craft just yet, because you’ll lose out on the sweet thing. It’s seductive, and, as a method of engagement with a campaign that’s basically “Earn money, unlock ships and things”, it works… I keep accepting the contracts, because hey, a little extra never hurt, free powerups when unlocking them normally costs 4 grand never hurt, and all I have to do is… Try a different style of racing.

Because yes, each racer has a different style. The Asera is twitchy, turning rapidly, accelerating quickly, but relying more on its mobility than its top speed… Or even shields. The Sulha craft, by comparison, are also not very well shielded, but are decidedly drifty, and extremely fast. That first screenshot was a Class III Sulha with its speed boosted as far as I humanly could. I exploded an average of once a lap… And still beat Gold time. Because when I used full boost on a long straight… It wasn’t a long straight anymore, it was a brief prelude to another corner. Not even recharging shields would have saved me for long, because the shields recharge when you’re not hitting things. 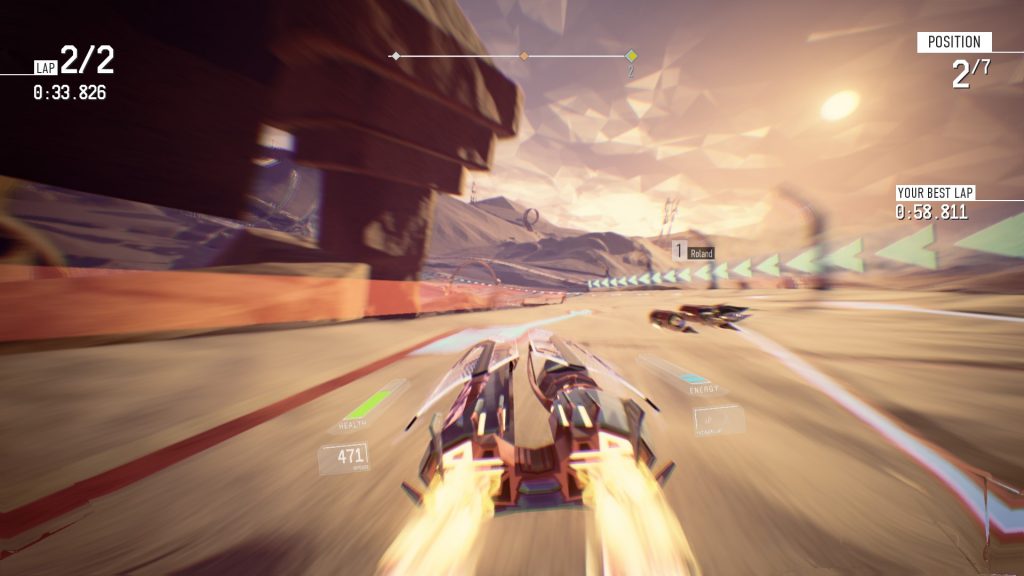 It’s surprisingly hard to get a good screenshot, because it isn’t screwing around, motion wise…

As such, I have yet to truly win an Arena match (A race, but you don’t get respawns, so when you explode or miss the track? Game over, baby!) with a Sulha racer. Speaking of, events also have a fair bit of variety, with Races of various types (No Powerups, normal Race, Last Man Standing, and Arena), Time Trials and Speed Trials, Score Survivals, and… “Boss” Races. No, not as in “There is a boss racer, like in Quantum Rush Champions or Wipeout Fusion”, as in “Hey, did you know these tracks in an area are actually linked? Now race the whole thing.”

It is very rare that I’m enthusiastically for a game, much less in the Future Racing genre, which is very much my bailiwick… But RedOut is well crafted, well balanced, with a good difficulty curve, only one or two tracks I actively dislike (34 Big Things, please make Tubes more clear… Thank you), and design that shows some real love and attention. 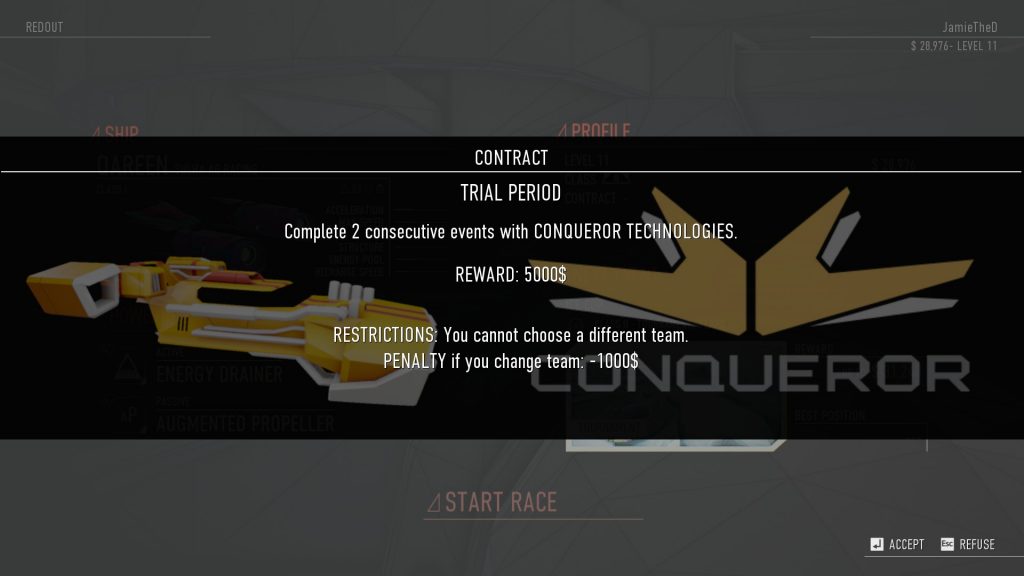 The Mad Welshman smiled as he ran his hands over his new Koeniggswerth Yggdrasil. Then he grinned as his mechanics started hauling in the improved turbines. Ohhh yes. This was going to be good.