Source: Cashmoneys
Price: £18.99
Where To Get It: Steam
Version Reviewed: 0.5
Other Reviews: Early Access 1, Release

City of Brass, last time I looked at it, showed promise. A game of quickly executing your plans in order to progress further into a city cursed with greed and everlasting life (of a sort) , it was already drawing me in, luring me with its traps, its enemies making for interesting, emergent challenges, and its middle eastern setting. 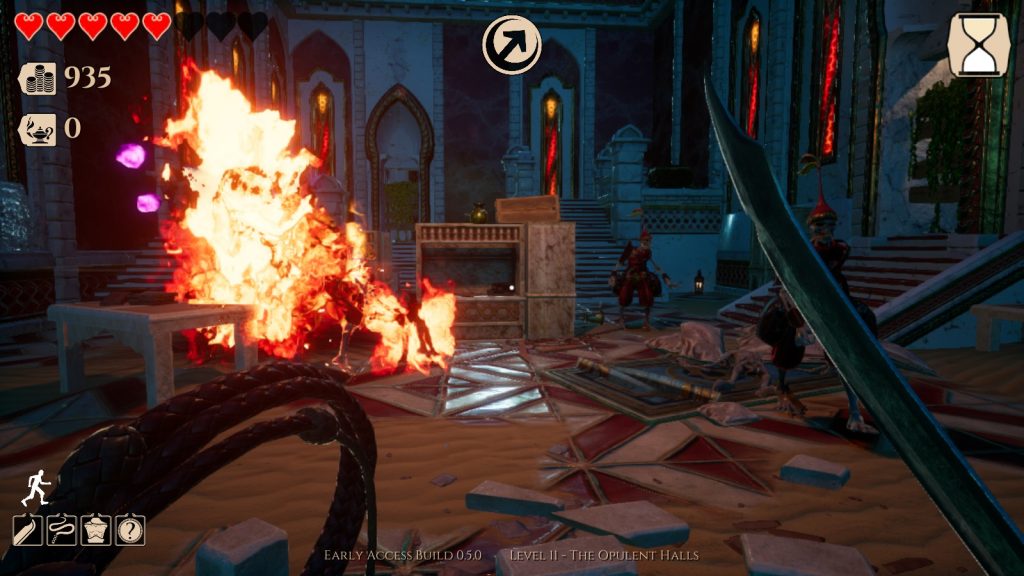 Mmm, the sweet smell of incense on the – oh, that’s burning undead? Huh, learn a new thing every day!

With blessings to match the burdens, further customising difficulty, I’m somewhat happy to say that the game has, overall, improved on its original promise. Even if some things remain roughly the same. Specifically, the Gatekeepers, bosses of each of the game’s five areas.

Before we get into that, though, let’s recap what remains good. Aesthetically, the game is on point, from its lush setting that subtly changes as you get further into the city, its musical and sound cues, and the clarity of everything. This is a treasure, I can tell by the noise, and the sight. This is a windtrap, clearly identifiable from even a fair way away, which is important if I want to know what not to randomly back into for instant death funtimes. That noise signifies I’ve been spotted by a sorceress. Not an archer, a sorceress. Maybe I can use that. I can, with the knowledge I’ve built up over three areas of the game so far, use a lot of this, if I play my cards right. And this is definitely a strength of the game.

Keeping the core gameplay simple, and challenging, is also of note. While items may affect, for example, the strength of your throws, or lure treasure to you, or change something about your basic weaponry and armour, you still know, roughly, what to expect: Here is your whip, for pulling and shoving enemies and items, triggering traps, and swinging off things. Here’s your sword, for walloping things. Here is your armour, and, normally, it will sort of protect you. Sort of. Three levels per area, three wishes you may or may not wish to spend (Including using all three at the beginning of the game to shortcut to the third area), it’s all simple to understand, and explains itself well. Similarly, blessings make things easier, but deny you a place on the leaderboard, burdens make things harder, and give you extra gold or XP. 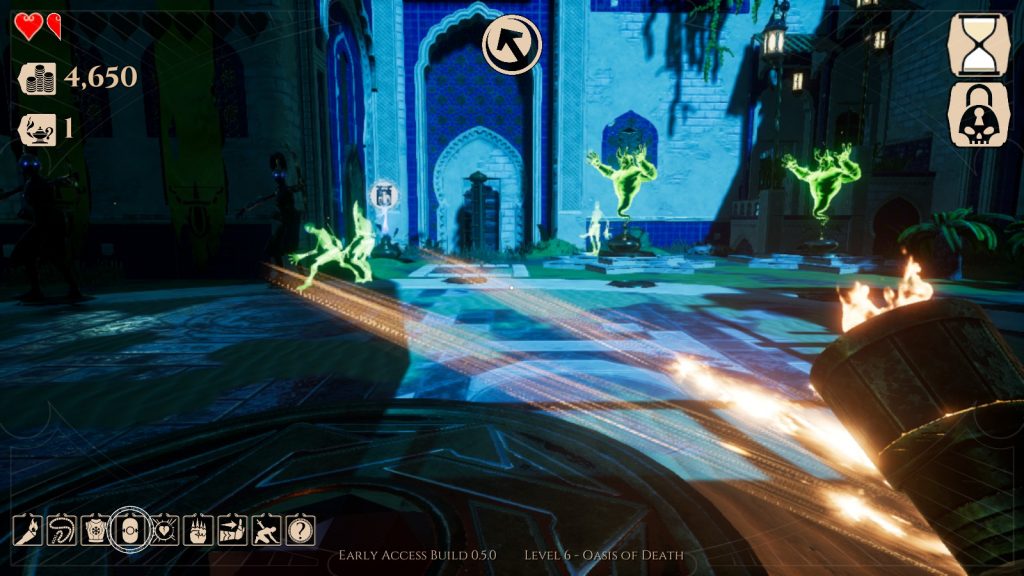 Wishes, if not used on skipping areas, can sometimes change the tactical landscape greatly. A good case in point are the trap genies, who now serve… ME.

The only wrinkle to this is that, once you get used to enemies and traps, you’re inevitably going to reach that third level, and find yourself facing off against something rare, that’s simultaneously harder to learn, and less likely to give you lots of chances to learn it: The Gatekeepers. Based on enemies previously encountered, the Gatekeepers are a leap in difficulty, and I’m thankful I have the option to skip three of the five with my wishes. Because oh boy, they’re hard. Take the first, the Sorceress analogue. Okay, so sorceresses are a pain. They don’t let you get close for long, take about as many hits as a guardsman (three) , and fire ranged attacks that, if they hit, hurt. They’re still something you can work with. The Sorceress, on the other hand, is, like her Gatekeeper Brethren, a gimmick enemy of a sort. No hitting her until her shield’s down, and how do you knock that shield down? Whipping homing projectiles back at her.

On the upside, you don’t have to hit them directly back at her. On the downside, you will, every few seconds, have to whip, block, or run the hell away from those projectiles, and you never have many hits with which to do it. It’s not insurmountable. It is a leap in difficulty, so these Gatekeepers are aptly named, skillgates of sorts, where, while they don’t take many more hits (not counting shields and the like), the difficulty is in getting those hits in. 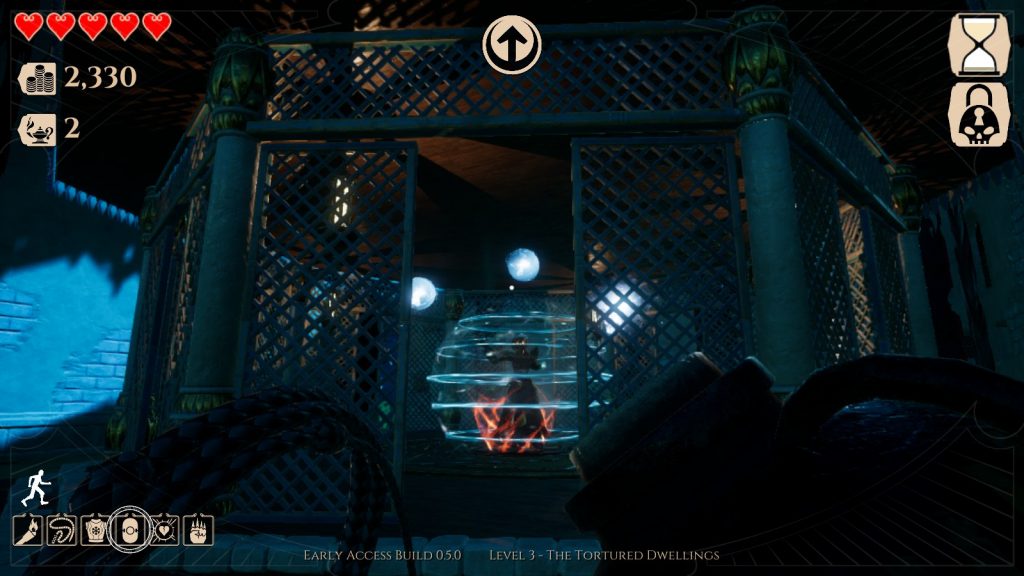 These shutters, thankfully, block some of the projectiles, and give you a temporary chance. Make the most of it.

Despite this, I still feel City of Brass definitely comes out more positive than negative. The developers have been very thoughtful in providing means of skipping some of these once they’re beaten for the first time, and the addition of blessings, in order to provide an easier experience, are a godsend. The game is clear, lush, and, for the most part, teaches its world and rules very well, and I continue… To look forward to what’s coming next.

After writing this review, The Mad Welshman had a run where he got to level 10, using the Extra Health and Damage blessings. They make a Big difference!