Last time I looked at Crest, the indirect god game in which you set commandments for your tribes (and they try to weasel out of them as soon as they humanly can, using their faith as a bargaining chip) , food was a bit of a problem. I am, on the one hand, happy to report that this is no longer the case for the majority of your early to mid game. 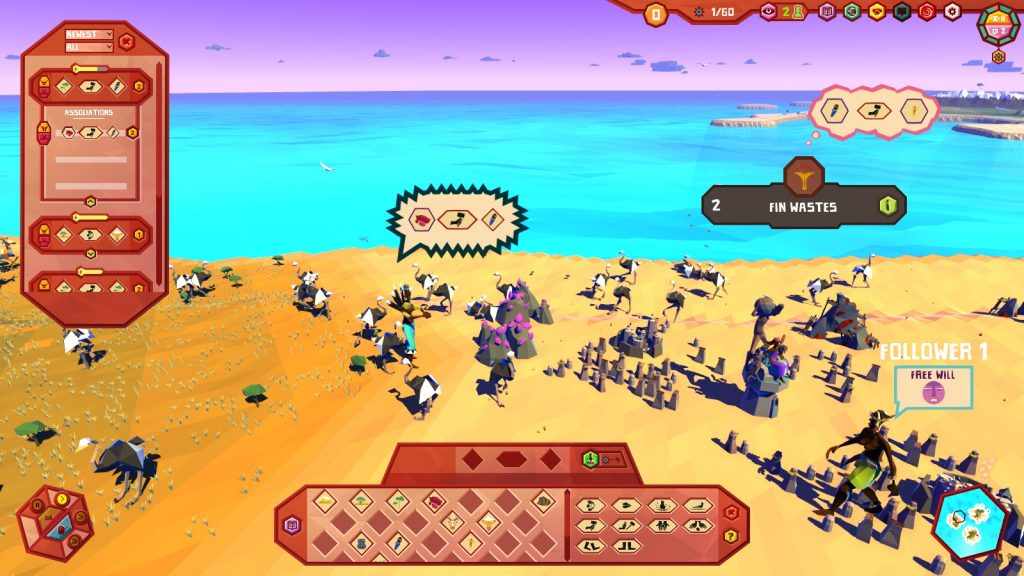 At times, priests of cities will travel to others, to spread their version of The Word. In this particular case, I suspect the villagers were confused about this mention of berry bushes, although “Nookie” was understood.

Sustainability, on the other hand, is a bit of an issue, and, as you might have guessed… I mainly think it’s because my followers are a bunch of gits. My own fault, I suppose, because keeping your followers happy, and keeping them sustainable is, as it turns out, a bit of a struggle.

“Go forth, those of you with children!”, I declared. “Go forth, multiply further, and be fruitful!” And lo, they sort of did, grumbling a bit because they were currently into gathering as many resources as possible, not all this babymaking business. But eventually, and for a while, it was good.

“My children, now that you know about these Antelope things I have created, go forth, and eat well (But sustainably!)” I called. And lo, they went to that one with gusto, and, for a little while, it was good.

“Spread further, and learn more of this world!” I proclaimed. And funnily enough, not everybody was happy with that one. Or the one where I asked the folks near metal to mine it so they could grow strong (and maybe defend themselves against what I knew, in my omniscience, to be Lions, but they hadn’t quite gotten the picture yet.) At various points, these turned into things like “Let us make more children if we already have them!” , “Let us hunt ostriches if we’re near antelopes, because we’ve suddenly decided we like ostriches more!” , and, most odd of all, “Let’s expand this whole Desert thing until everybody can share in our bounty!” 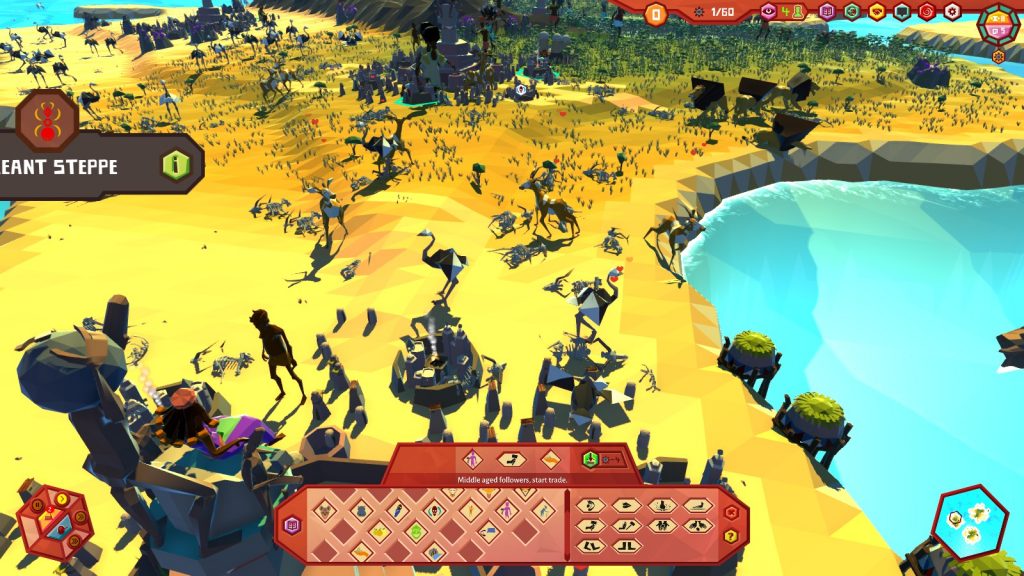 And yea, did WelshGod look down upon what he had wrought, and mightily he did facepalm.

I hate to break it to you, my (sometimes, conditionally) loyal ones, but that doesn’t spread metal, gems, or even ostriches. So, er… I did nix these commandments, as far as I could with the faith I was given, and lo, faith in me did drop, so they did what the hell they wanted for a short while, until I had another bright idea.

“Young of the world, socialise with thy brethren, learn more of thy neighbour!” And lo, that one went down rather well. Of course, by this time, the antelope were looking a little thin, and the lions (they’d finally learned what they were… Painfully, in at least some cases) not very thin at all. Hummm…

“Go forth, those of you near lions, go forth with all that metal you have, and bang it loudly near the lion, to scare it from you unto the territory of those people you dislike!” I spoke. Well, more generally than that, working in Noun Verb Noun isn’t exactly a science, but they at least looked like they had the idea. 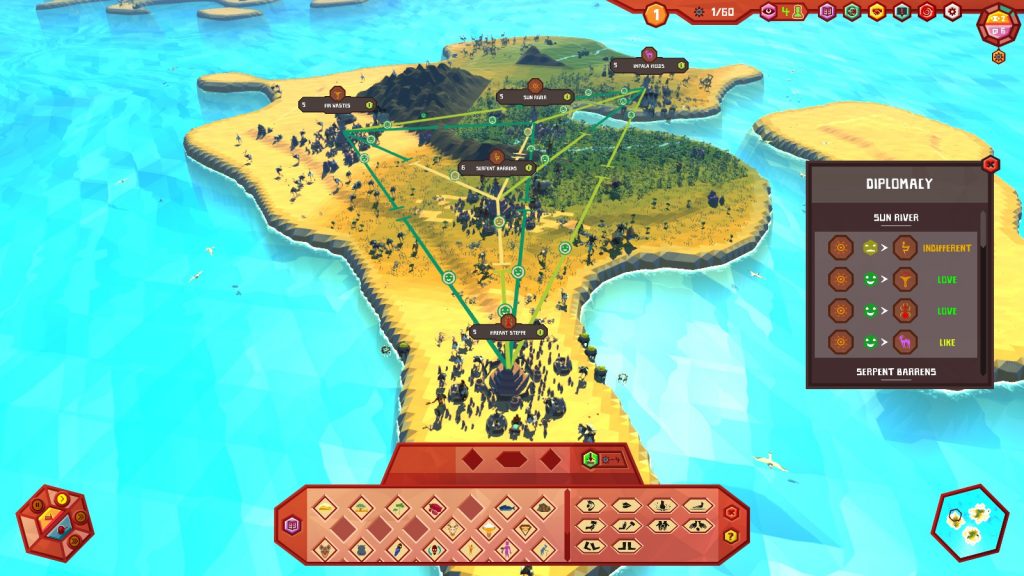 But, apart from, like, *one* war, everyone was talking, so most people were at *worst* apathetic! <3

And lo, that wasn’t very good at all. In fact, that’s the story of how a deity managed to kill the second city its followers had ever built, in under 10 minutes. Of course, by this time, I’d also taught my followers all but the final tier of words, which would have included useful things like “Ocean” (for sending my followers far, far away, to new lands), and firmly reached the point where, beyond keeping my followers alive and (relatively) faithful, there wasn’t really much of a goal.

Still, it was a fun time, being a deity, even if I was well on the way to cocking it up royally by the time I started writing this review. A shortish time (It takes only a few hours of judicious commandmenting to get the majority of words), but one I enjoyed a fair bit, due to a fair tutorial, an improved word discovery system, the fact that followers now fed themselves (and procreated, once they got the idea), and the lovely, low poly aesthetic of a sub-saharan world where survival very much meant living in balance with nature.

I didn’t get the hang of that bit (or rather, was heading toward the point where it was clear I hadn’t got the hang of that bit, not the point of no return), but for all my mistakes (and the aforementioned weaselling of my followers) , I can tell you this: Unhappy was a word they never learned. Also, annoyingly, Gems. But I’ll take the fact nobody knew they were unhappy as a win. 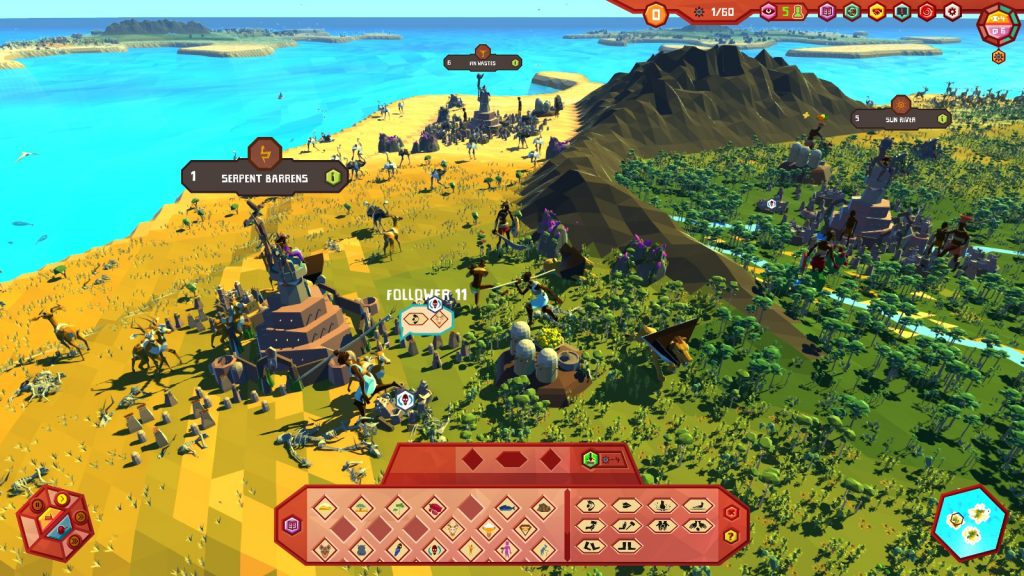 Mere days (minutes, in DeityTime) before the final follower of the village realised a single villager is not, in fact, scary to a lion that’s already eaten so many delicious humans.