It perhaps says something, whether about me, or the design of Caves of Qud, that I hadn’t actually noticed it was still in Early Access. “Oh, I haven’t gotten to this fellow yet!”

“That’s because we hadn’t put him in yet.”

Before you go thinking this is a bad sign, I’d like you to take a look at this map. This map is, as far as I am aware, entirely explorable, although certain areas are more deadly than others. It’s just, right now, there’s only a few quest lines, and you have to explore to find more than two of them, or, indeed, some of the other odd sights of the game. 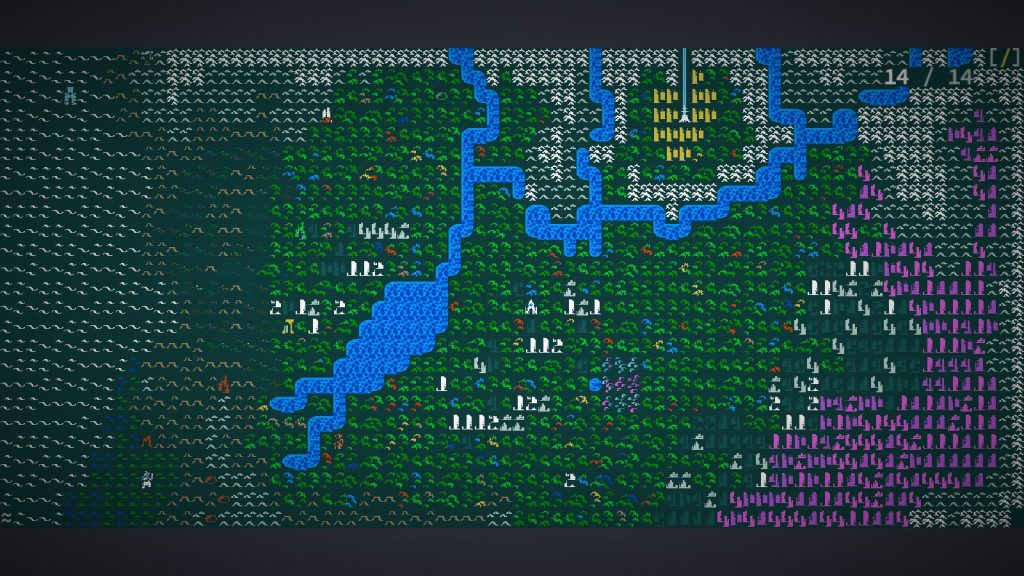 Pretty much all of this is explorable. Each “tile” here appears to be about three screens wide/high. That’s a lot of screens.

Good example, on my last run, I was curious about a fish, just sitting there in the open. Turns out it was a trader, and a pretty good one at that. So yes, this is emblematic of how Caves of Qud is meant to be played: Carefully, and with attention paid both to the in-game manual and the surroundings. Especially since even the starting areas are a threat. So let’s talk about the various early-games of Timot, Mutated Human Tinker.

Timot, in all of the universes we are about to discuss, knows how to move, has a stinger on his back with paralyzing venom, glows in the dark, and is strangely muscled for one of his slight stature. He has learned a secret of the ancient mechanisms of Qud (Usually, it must be said, some form of grenade or other easily understood weapon), and can make them if he has the materials (Again, he usually has enough to make at least one.) His story always starts in Joppa, a small village with a food problem, a Zealot of the Six Day Stilt (an anti-machine cult… The Zealot seldom survives), an irascible tinker named Argyve (Who Timot invariably makes friends with, by trading some of his gear with), a trader of the Dromad people (Camel like merchants), and several chests (Which Timot loots. So don’t feel bad about his many deaths, Timot is not a nice person. So few are in Qud.) 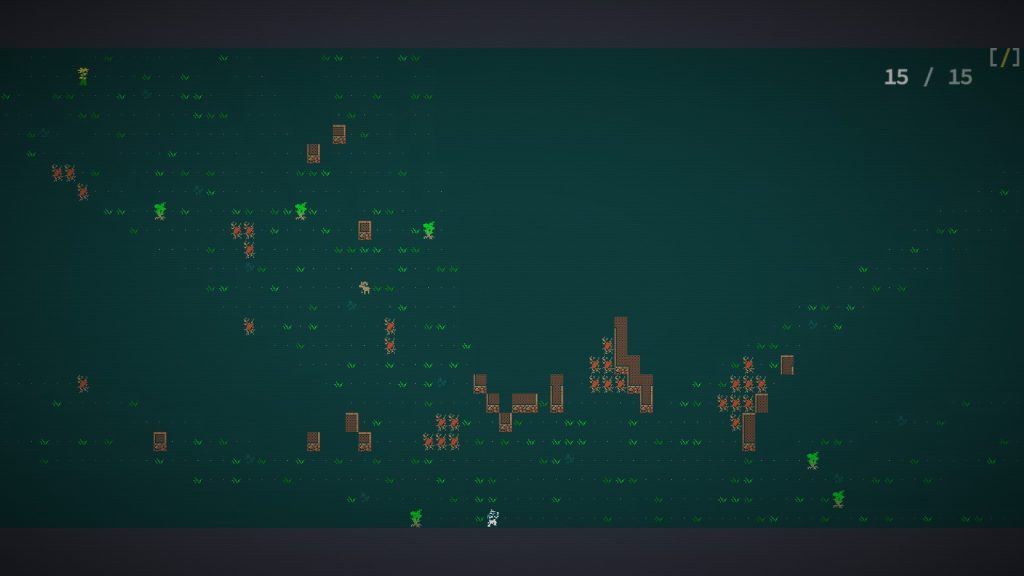 A Qudzu field. Qudzu, in this game, is even nastier than normal. It rusts things. And it *wants* to rust things close to it…

Even here, there is potentially death. In some universes, Timot is interrupted in his thievery by Ctephius, a glowing ray-cat, and the villagers’ justice is swift. Rarely, the Zealot is triumphant, and Timot’s corpse feeds the water giving vinewafers. But Timot soon sets off, either to the Rust Plains, to gather copper wire for Argyve’s communication device, or to the caves to the north, to deal with Joppa’s food problem.

To the east, canyons and caves. To the north, however, the universes diverge more readily. Sometimes, a road bisects the vinewafer marshes Timot tramps through. Sometimes, Timot encounters ruins of the ancients, with their defenses still active, and larger, nastier creatures. All too often, Timot has cried “I have found this ancient device, and divined its meaning, it is a fine weapon, and no-URK” , as the Chitinous Puma he hadn’t noticed, or foolishly ignored, eviscerated him. Yes, even on the way to one of the first quests, creatures vastly more powerful than you can be encountered, and you can’t always run away in time. Other things only look tough, thankfully.

In another set of universes still, a vast fungus or slime field lies between Timot and his goal of Red Rock. These also have potential for good or ill, as the Weeps of the fungal fields, long forgotten biological tools of the ancients, create many substances, whether water-spoiling salt, black welling oil, life giving water, and sometimes, stranger substances, such as acids, cider, wine, honey, and even, in one case, lava. But guarding those Weeps are the fungi themselves, infecting any who dare to come close with their own unique brand of fungal infection, from the relatively benign Glowcrust to the more annoying Azurepuff. 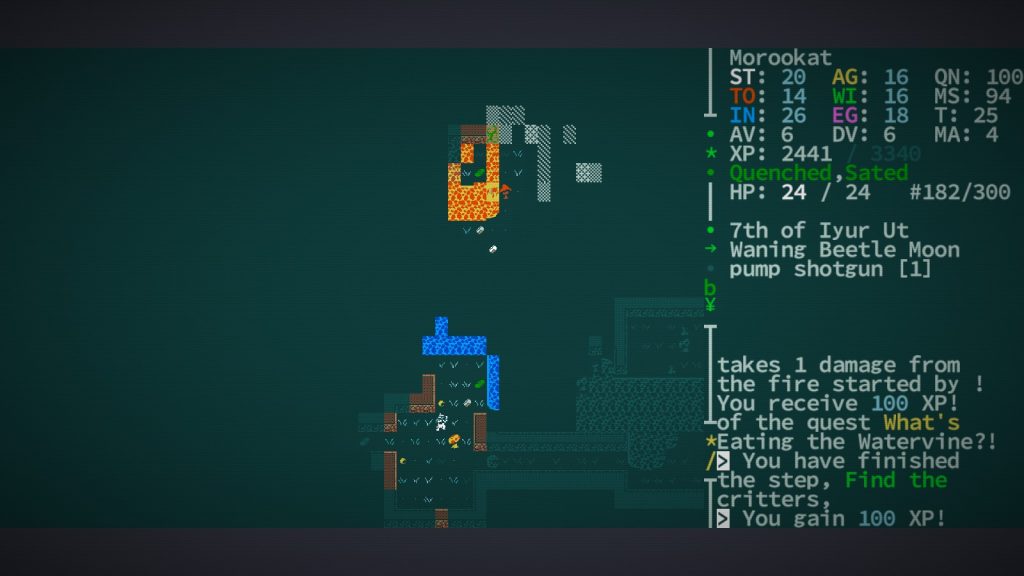 This is all before Timot even reaches Red Rock, although he could bypass a lot of this by virtue of quick travel. But then, why would he, when the rewards can be so grand? Admittedly, a lot of the time, it’s food, or basic weaponry to trade in exchange for items, trade goods such as copper nuggets, or that combination of lifegiver and basic currency, water. But a single Water Weep, especially early on, is the stuff of mercantile legend, and the canny (or lucky) explorer can find lost technology, from grenades of various sorts, to utility devices like those poorly understand teleportation devices, the Recoilers, all the way to the truly strange, such as symbiotic fireflies, spheres of negative weight, or the fabled gaslight weaponry, elegant and lethal symbols of forgotten glory.

Of course, death also comes in many forms to the unwary, and the game is not the friendliest to begin with. It’s definitely a game where reading the in-game help is highly recommended, and, while the alternate overlay mostly reduces clutter, I find it far more useful to use the older stat/message overlay, turning it off to reduce clutter when I’m not in a dangerous situation, and holding ALT to more clearly see certain terrain features (Trash, mostly.) Sadly, the alternate button overlay is somewhat cluttered itself, obscuring several portions of the screen.

Still, that there’s enough in the game already to explore and wonder at that I completely missed the fact an important NPC hadn’t been introduced until last week speaks well of the game, and roguelike fans may do well by themselves for checking it and its mostly readable tileset out. They’ll certainly find quite a few stories waiting for them.

…Stories such as Morookat, The Spiteful Thief and his Fiery End.

The Mad Welshman looked around after he closed the door. Nobody, good. He opened the Joppa villager’s chest, grinning as he saw steel and water. And then he heard it. “Mrow?”

Fuck. The Cat had found him.