Blood Bowl, the turn based strategy game set in Warhammer’s equivalent of American Football, has returned. Except it never really left, and I’m feeling very conflicted about this release. For context, this review comes from somebody who has been playing the game since Dark Elves Edition of Blood Bowl “1”. Which was the second of four editions of the same game. This, in essence, is an elephant in the room. And I can’t really avoid talking about it. 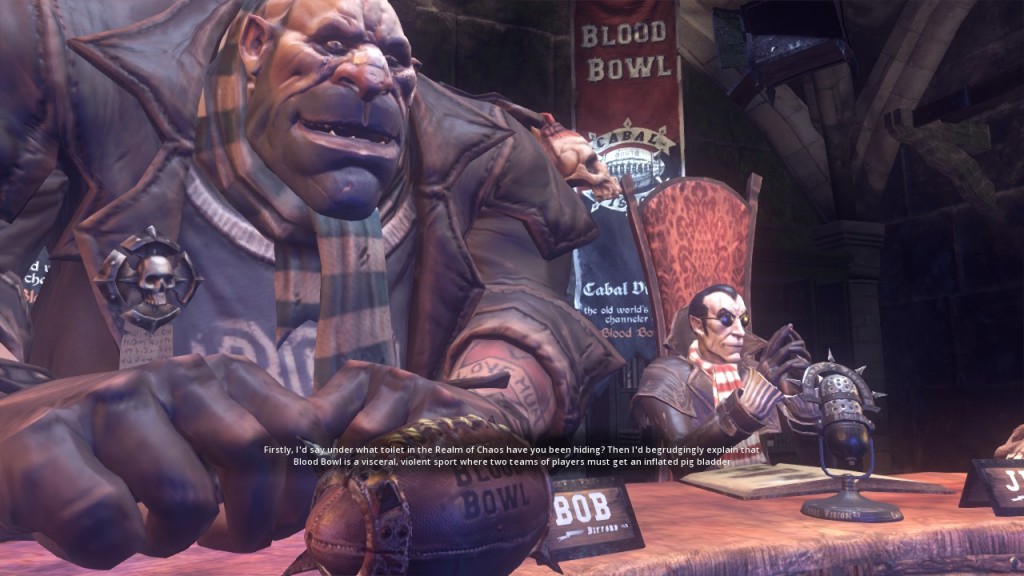 At its core, Blood Bowl is about positioning, use of skills, and dice. Lots of dice. Dodging is a dice roll. Passing, blocking, throwing, catching… All dice. Rerolls are a thing you can buy for your team, and they’re important. Beyond that, there’s play styles that each team are suited to. Skaven, for example, play a running game: They’re only okay at passing, but they’re good at dodging away from players marking them, and they can run a long way. Orcs, by contrast, are bashy: They excel at punching things, relatively bad at passing and dodging, and are about average in terms of mobility. It’s relatively easy to learn, but mastering it takes a bit of thought and practice. Your average game takes between 1 and 2 hours, so it is somewhat time consuming.

I would like to begin by mentioning that Blood Bowl has a variety of teams, but this is only really true for Blood Bowl: Legendary Edition, and Chaos Edition. 2 is a complete reset, with a new engine, and new design decisions… And funnily enough, this is part of the problem, the elephant in the room. Blood Bowl 2 is undeniably prettier than the previous 4 editions, with meaty animations, a UI where players’ stats and skills are represented by collector’s cards, and some quality sound work. But it’s also a more limited experience than previous editions, in more areas than just the 8 teams (plus one team if you pre-ordered) compared to Chaos Edition’s 23 (More teams are coming, but as DLC.) Not helping is the fact that many of these new or changed features are implemented in odd ways. 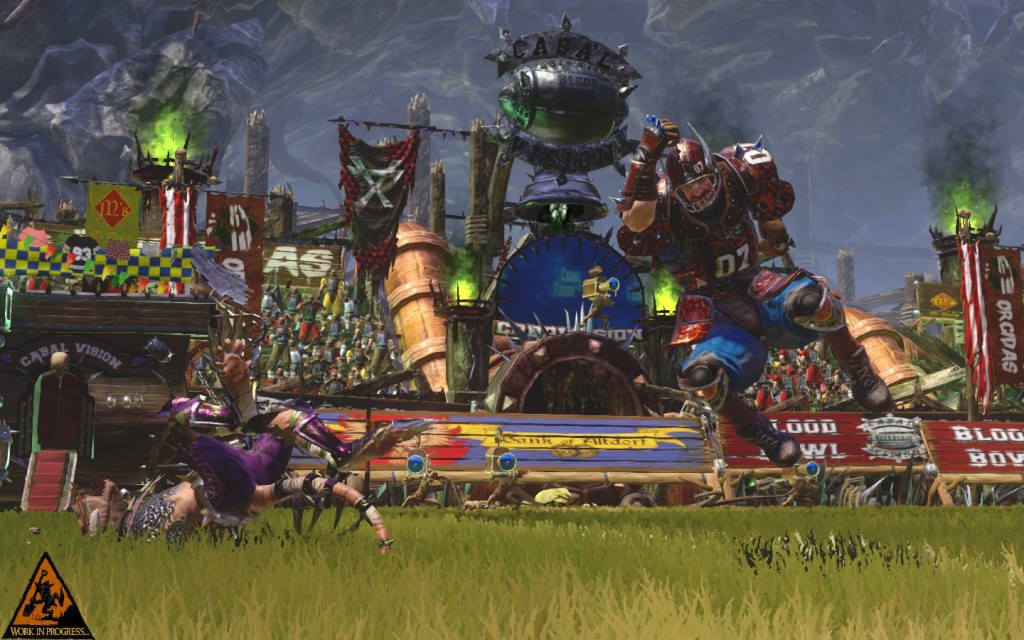 The animations are undeniably cool… But they pad playtime.

For example, the “Campaign” is somewhat similar to Legendary Edition’s, in that it’s a combination tutorial/challenge mode, with surprise events. But it’s more limited in the sense that you are playing one team (Humans, the generalists) instead of learning core mechanics from multiple teams, and oddly implemented in that the tutorial section (Comprising at least the first two hours of play if you go there first)… Is teaching in ways that experienced Blood Bowl players would scratch their heads at. Part of a match is played before teaching about buying players (With less options than you’d have in a real game, and much worse AI), and then another match goes by (Finally showing you blocking and other important skills) before you can buy “Staff” (Apothecaries, “Fan Factor”, Cheerleaders, and, rivalling in importance to Apothecaries… Rerolls).

Meanwhile, if a new player chooses to hotseat play both sides of a Friendly match, with an experienced Blood Bowl player’s YouTube video open, they’ll get a feel for movement, passing, skills, and the like in… Probably less time than the Campaign does, and for the team they want to play.

Animations, meanwhile, are a feature that experienced players would like to selectively ignore. But the selections are… Touchdowns only, “No animations”, or All animations. So that’s a choice between “Watch running and touchdowns”, “Watch running”, and “Watch running, touchdowns, and every single block that isn’t a push, with a side order of every time you fail a dodge or attempt a pass.” The animation system also appears to have led to less customisation than previous editions of Blood Bowl, with only set colours, no armour changes beyond those gained by levelling up (and some skills/mutations), and a set of heads to choose from as your main customisation option. 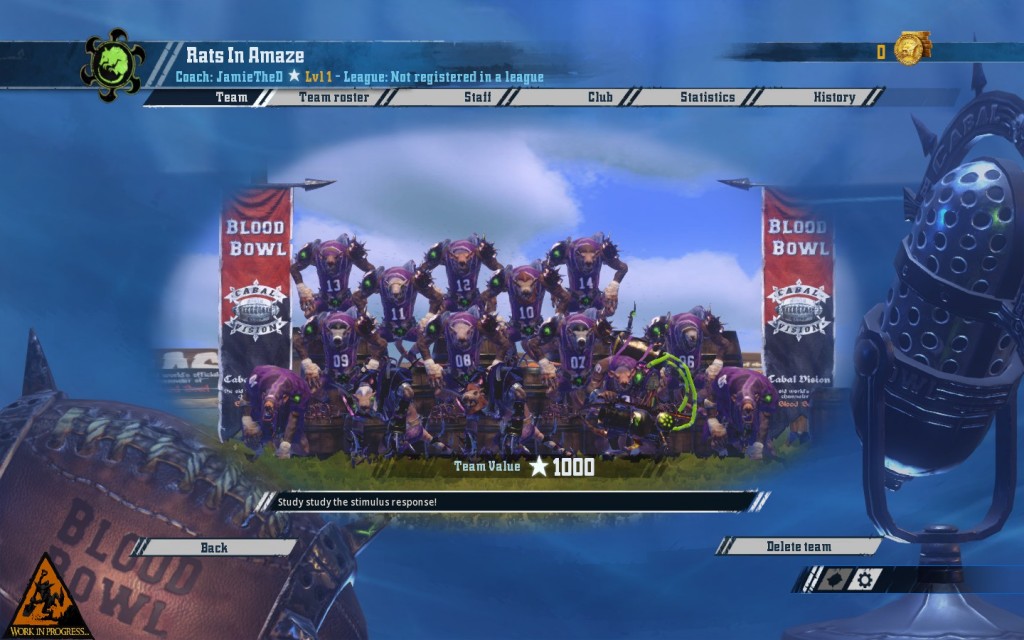 It is an unofficial “rule” that you must make bad puns when naming your team and its members.

Controls and camera, similarly, will make returning players scratch their head. Previous editions had a fully movable camera with the ability to show player names, player positions, and tackle zones/movement ranges, but Blood Bowl 2… Plays it slightly differently. There are two cameras at a fixed angle, with a fixed zoom arc (Movable, though) marked “Blood Bowl 2 Camera” (Faces toward the opposite left corner of the pitch) and “Blood Bowl 1 Camera” (Faces the opposing endzone). Controls are also in “Blood Bowl 2” and “Blood Bowl 1” flavours, but the latter isn’t quite accurate, as Blood Bowl 1 allowed a player to queue movement, then passing in one go, while Blood Bowl 2… Doesn’t. The difference appears to be “Right click for movement in Blood Bowl 1 Controls”… And that’s it. Passing, as opposed to BB1, is a case of moving, waiting until the move animation is done, then passing.

Some features, also, appear to be missing or imperfectly implemented. Jim Johnson and Bob Bifford, the two commentators, have been placed firmly in both the menu and the Campaign, but their expressions in Campaign mode… Don’t follow nearly the same range as their voice does, and their subtitles have this tendency not to match what they’re actually saying (Sometimes drastically, as in the case of the Halfling Joke. Two bad jokes for the price of one if you have subtitles on, I guess?) You can buy cheerleaders for your team, but will be faced with human cheerleaders every time. Buying rerolls before a team basically involves specifically turning down buying players, then going through the tabs and buying what you want, in the order that you want. And there is an achievement that involves deliberately inflating your Team Value (A dangerous proposition in a League) by having 500K in your bank (A new rule was introduced that means all earnings in your account over 150K count toward your Team Value, you see.) 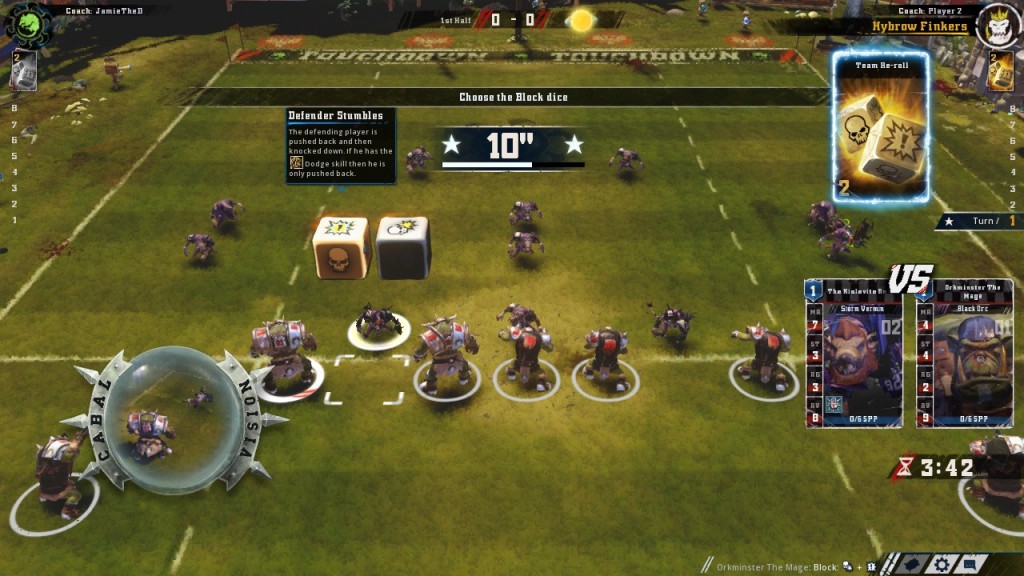 Generally your first action in a Blood Bowl match is to hit someone.

This isn’t to say that there aren’t some new and interesting features. Upgrading your stadium. Coach levels. Sponsors. Aging. And, of course, the newly implemented team, the Bretonnians, whose Blitzers do most of the work, whose Linemen are, as with most Linemen, fodder that you might care about if they levelled up, and whose Blockers are interesting in that their starting skill (Wrestle) means you have to make a deliberate choice of ignoring Wrestle, and thus having a slightly weaker “Blocker” than similarly levelled Blockers of other teams, or making a nonstandard build and ignoring the majority of the Strength skill tree (Which is normally a good thing for Blockers, but the majority of Strength skills don’t synergise well with Wrestle). The preview of what your action will likely do is also nice.

Normally, I’d say this was an interesting game with some odd design decisions and implementations. But the elephant in the room, that all important context that there are four previous games, at least two of which have more teams (Legendary/Chaos Edition), at least one of which has a better tutorial/challenge campaign for its Single Player in terms of teaching and team variety (Legendary Edition), and at least one edition has both a devoted playerbase and a cheaper price tag (Chaos Edition, at £20) means that… I’m not entirely sure I can recommend Blood Bowl 2 at the present time. Which is incredibly awkward for me, as, while I want Blood Bowl to continue selling, the increased shininess… Really doesn’t disguise some awkward design decisions that make it, in its own way, just as clunky as the previous 4 games in the series.

The Mad Welshman coaches many teams, in many universes. He’s going back to the one where he can play the Legendary Khemri Passing Game now. He feels oddly sad that this is so.