Ahhh, Battlechasers. An interesting comic about a young girl called Gully, who inherited her late father’s magical gauntlets, and now… An interesting RPG mixing turn based combat with real-time exploration. So, with the foreknowledge that I mostly like this game, let’s get the “Your mileage may vary” bit out of the way, shall we? 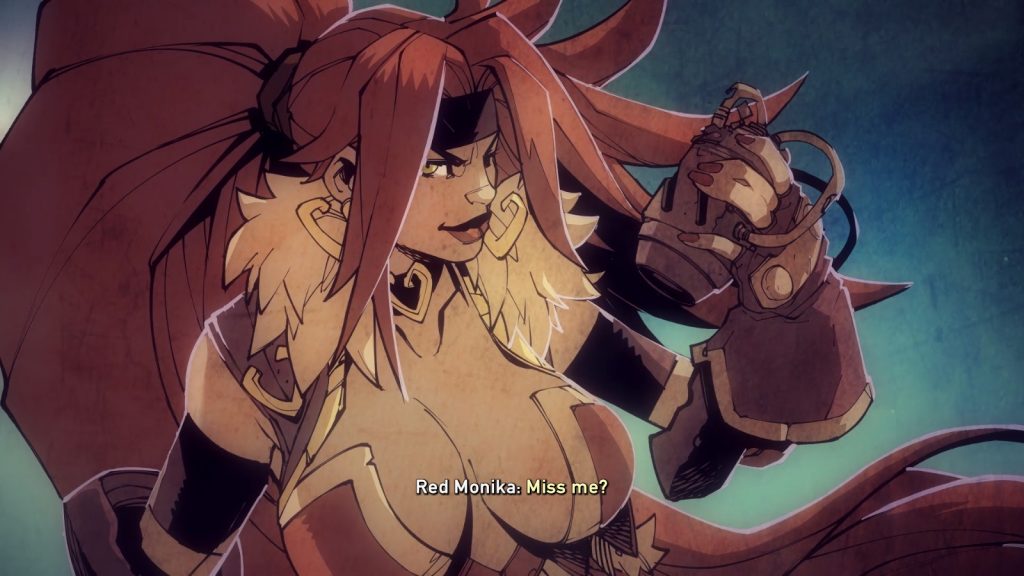 Er… No, Monika. Although you’re one of the few I *don’t* miss in this game.

Nightwar is, as I stated, based on a comic called Battlechasers from Image back in the late 90s. It was written by Joe Madureira and Muneir Sharrief, with a variety of artists, although the pencils were all done by Joe Madureira (Who, not coincidentally, was the art lead on Nightwar.) Even though it ran for only 9 issues, it’s had a cult following, and the art style is very distinctive. Also distinctive are the sometimes implausible costumes that mainly seem to affect the women (His work can be male gazey. Like… Juuuuust a tadge.) This is a good segue into the visuals.

So yeah, while I’m not the biggest fan of the more implausible lady costumes (Which isn’t a huge pool to choose from, and mostly consists of Red Monika, the heavily Red Sonja inspired and largely unsupported rogue of the group… And yes, I was talking about the boob cup), I cannot argue that I like most of the character and monster designs of the game. Gully is perhaps the best example of a teen punchwitch I know of, Calibretto is an interesting and cool design, and there’s a lot of dynamic, colourful, and well crafted art on display here, and not just in the characters and creatures. The overworld map gives the impression of an actual map, with little crosshatches, designs, and other nifty little elements, and the world is both colourful and clear. The battle animations are meaty as heck, and quite a few hours in, I’ve yet to tire of even some of the more basic ones. Soundwise, the game’s a little less impressive, but only a touch, and so, aesthetically, it’s been quite the pleasing experience. 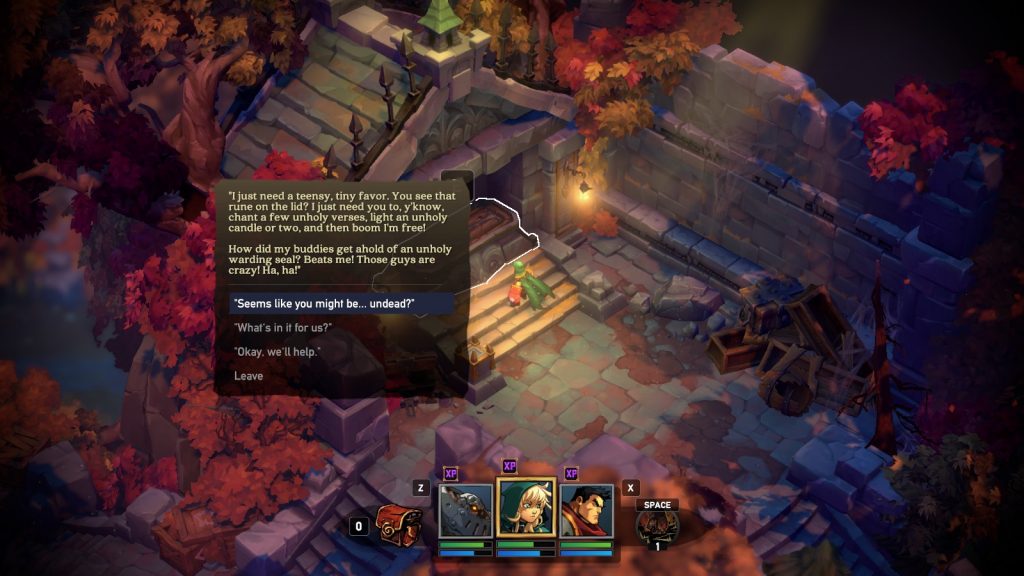 Example of the charm: I genuinely appreciate a Lich who has the brass to try something like this.

Writing wise, well, it’s high fantasy where Mana, the source of magic, is a mineable resource, and technologies both ancient and new have arisen as a result. Our heroes go to a forgotten island, get shot down by unexpected pirates, and get embroiled in deeds that threaten the wooooorld. So, on the surface, the writing isn’t exactly going to win awards. But, with the exception of Knolan, who is presented in barks as quite the unlikable asshole of a wizard (and not much better outside), again, it seems to work. Quest steps are mostly well explained and reasonable, there’s at least a little bit of character in everyone (From the snobbish, jaded alchemist to the Lycelot who believes his tribes have lost their way in following… [DRAMATIC THUNDER] The Dark Lady) , and everything has a sense of place, fantastic as it is. Mana mines that have been abandoned due to some unforeseen taint (Not to mention the fact that they’d almost run dry)? Reasonable. A shanty-town with industrial elements as a bandit stronghold? Reasonable. Heck, not even all the bandits are willing to fight. It’s one of those things where I’d feel silly trying to explain its charm to someone who’s never seen high fantasy of any sort, but it is, nonetheless, pretty well put together.

So… We’ve established that, narratively, there’s charm… What about the damn game, Jamie, what about the gaaaame? Hold your horses, because that, also, is reasonable and with a charm of its own. First up, this is fairly friendly for an RPG. You don’t die, you get knocked out if you screw up, lose some money, and end up back in town. And the difficulty curve is reasonable enough that the only times that’s ever happened are either when I’ve unwittingly disturbed something way above my pay grade (For example, an Elder Elemental Deity. Ohhhh, they’ll get theirs, the rocky, fiery asshole…) or during trap-heavy dungeons (Traps, being in the real-time exploration, are somewhat harder to deal with than, say, a magic/coal powered mechanical device built for ramming people with spiky, speedy violence.) Heck, I haven’t even been grinding that much, and I’ve been Doing Okay. Part of this is that stats are mainly linked to your level, with some boosts from equipment, some from perks that let you mix and match two paths of each character, and some from the Bestiary, which improves your stats the more goals you fulfil… Most of which you’ll be doing organically through play. Kill 50 beasts? Yeah, no prob, thanks for the 1% increase in health! Similarly, each character has abilities that either affect the world (See stealthed enemies, smash secret walls), an impending fight (Inflict bleeding if you hit with Calibretto’s cannon, for example), or both (that smashing secret walls? Also stuns enemies at the start of a fight if you get it off.) 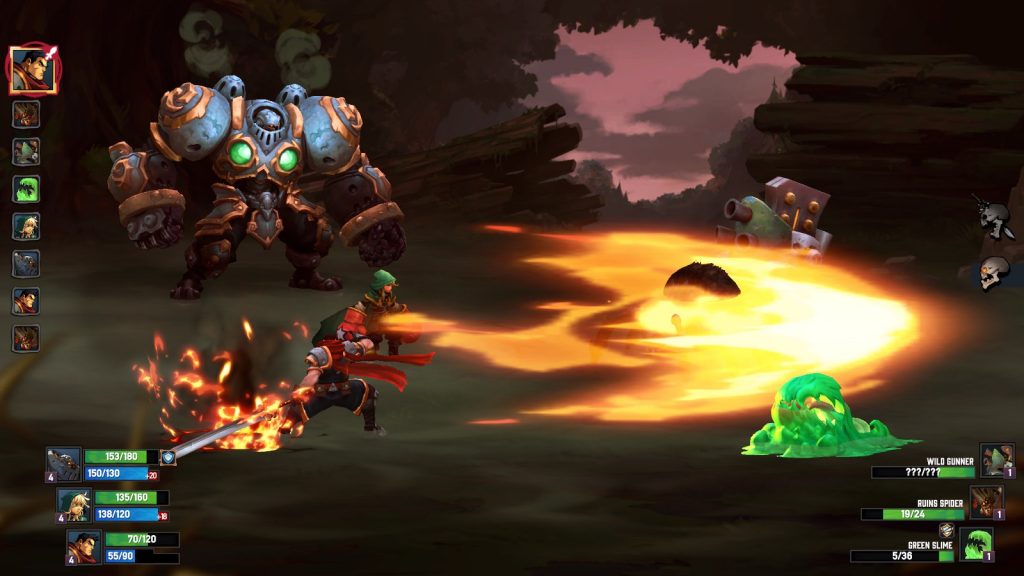 This was 0.1 seconds before EVERYTHING DIED (Also two XP bonuses, possibly three)

What I guess I’m getting at is that Battlechasers: Nightwar, for all its niggles, is a solid, charming, and, for an RPG, a friendly experience overall. I quite like it, and I definitely see myself aiming for finishing New Game+ .

The Mad Welshman would like to know where one can get these self-propelling tanks. Answers at the tradesman’s entrance, please.