As Future Racers go, Antigraviator is an interesting, but slightly flawed one. It’s trying something different, and I appreciate that, but that doesn’t really change that it doesn’t, entirely at least, work well. 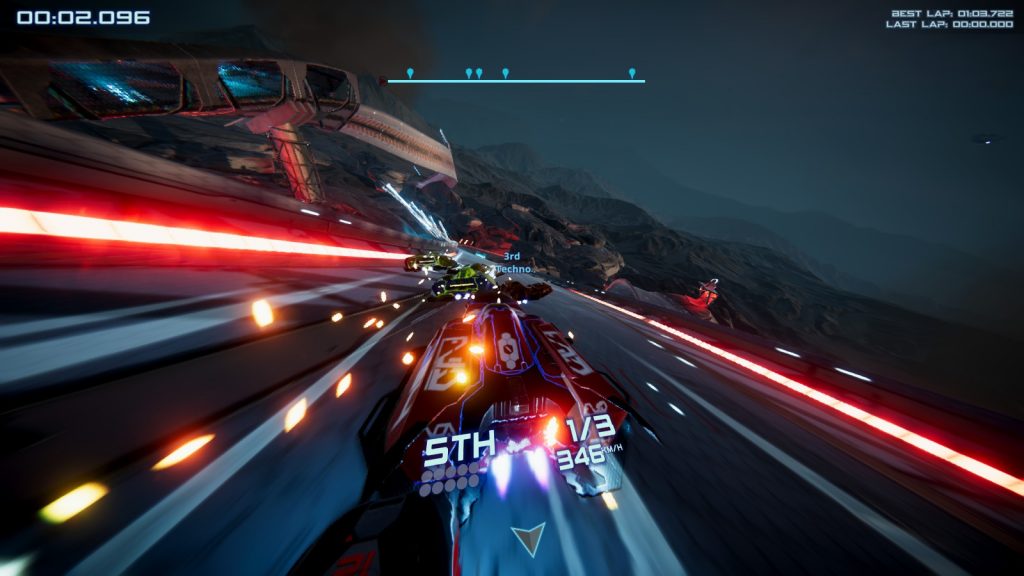 I would like to apologise for being good enough at Future Racing games that this is the only mid-pack screenshot I have.

So, it’s a Future Racer, so there’s gravity hovercraft wot go fast, a lot of tracks in varying locales in tournaments of increasing difficulty, a boost start (Gotten by holding accelerate just as 2 vanishes and 1 is about to count), and… No context for any of this. Nope, this is a racing tournament, just a racing tournament, and that’s all good, with no in-game lore. Interesting move.

But, make no mistake, the tracks are very pretty. Even in the first tourney, you go from a “standard” city setting, to racing over the ocean, through a canyon system, and in orbit. It’s lush, and it’s fast, and it’s here we start to see this minimalist future racing game fight with itself, design wise.

It’s fast, and there’s a lot, I mean a lot, of blind jumps and turns, sometimes quite hard ones, sometimes in quick succession. But don’t worry, because only grievous collisions slow you down more than a tadge, and, unless you’ve gone for a low armour craft (more on that later), getting blown up by anything short of leaving the track (an instant explosion if you don’t land on the track, followed, in most cases, by respawn and loss of all speed you’ve built up) is quite tough. Okay, cool, these design decisions appear to have cancelled each other out for an alright, if odd baseline. But then we hit the Deathmatch mode of races, and they’re longer, and harder to lose, precisely because you have so much armour (and so do some of the other racers.) So, how do you blow people up?

Well, instead of weapon pickups, you have, at pre-determined points of the track, traps. Some are near-certain killers (like the reverse controls/magnet trap) , some are, basically, weapons (the missile), and the rest vary between fitting and slightly silly, deadly and slowing. Most require someone to be in front of you to trigger, give you a temporary immunity that usually gets you through the trap yourself, and have the good feature of telling you whether they caught somebody. 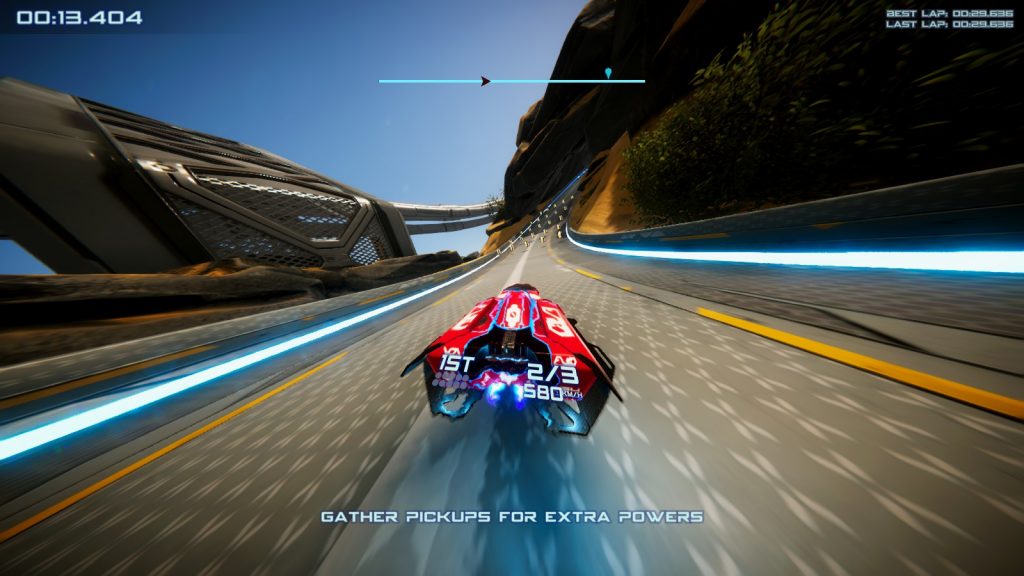 The first time playing, it goes straight to the mandatory tutorial. Not sure how I feel about that.

Unfortunately, they also require you and the other racer to be in a specific set of ranges to trigger, which conflicts, somewhat, with the other main mechanic, boost energy. See, going fast by collecting boost cylinders, and then boosting with the up arrow (2 cylinders per boost, and you can chain them pretty quickly) means that, funnily enough, you can end up first very quickly, so most of these traps… No longer mean much to you, especially if you stay far ahead enough that traps mean nothing. Even if, due to the fact the AI racers are fairly good, you’re not in first, you’re going quickly enough that, by the time the icon on the back of your ship lights up to show a trap has gone off, by the time it tells you a trap is ready, and by the time you look away from your real visual focal point of the track ahead of the ship (because you’re going very fast) … You miss your chance. The better a racer you are, the less you get to see or use a feature.

I’m not going to lie, I don’t have good answers for alternatives beyond the traditional, and I can also see why the traditional is being turned down here: It democratises things, to an extent, as the traps are track dependent, not based on loadout, or pre-genned track items, or a semi-random weapon pickup. The higher armour definitely helps ensure you can keep your speed (mostly) in track design that just wouldn’t work if, for example, wall and other ship collisions seriously hurt you, so the developers can use all those blind, sharp corners and jumps that normally, I would be crying hatred for, from the word go… Indeed, the final track of the second tournament, Michael’s Bay, earns my ire for being more hostile than the tracks bracketing it on either side, a solid and frustrating difficulty spike in a game otherwise able to mitigate that.

Finally, we get to the customisation options, and my greatest mystification. Scaling costs, I somewhat understand, but they’re applied inconsistently. Non-body parts, for example, don’t have nearly the steep cost rises that the two other body types (one tankier, one the “hard mode” craft that’s supremely fast, but has far inferior handling and shields), and… The colour schemes? 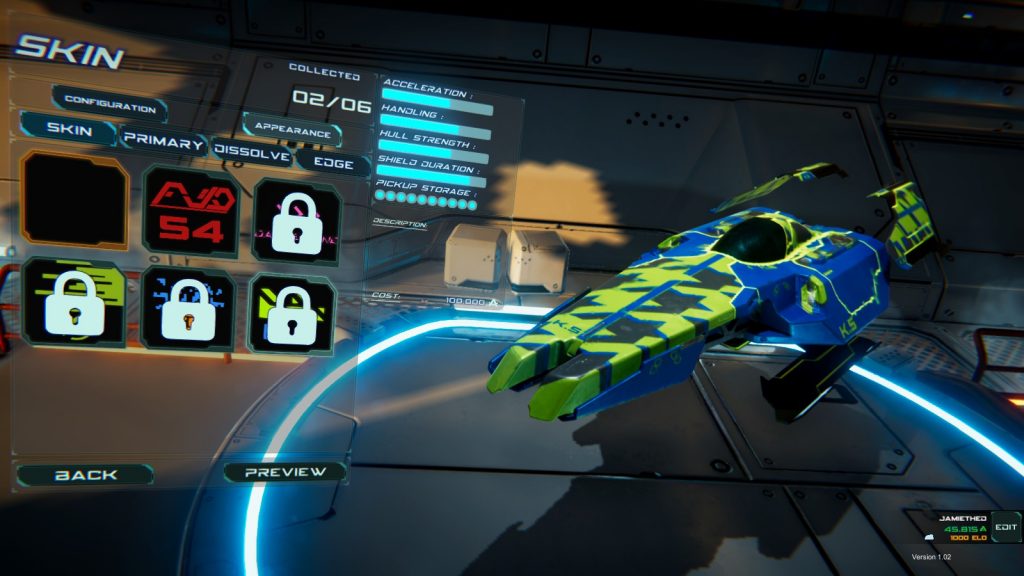 Accessibility note: The cost of the item should not be below the stat bar, and should be bigger than it is. The cost is 100,000.

No, really… The final colour scheme costs almost as much as the hard mode body part, and each colour scheme is more expensive than the last, because… I genuinely couldn’t tell you. I have no answer here, and it both confuses and annoys.

In the end, with the odder exceptions aside, Antigraviator is actually fun. It manages to be fun despite its design decisions fighting each other like design decisions were a cage match. Its online play has rankings, but remains fun, and the quick race mode means, unless you want to buy from the somewhat limited part set, you don’t have to engage with the tournament structure, just… To have a good time. Doesn’t change the fact it confuses me greatly, but it does make recommending it for what it is slightly easier. Worth a go to see something different being done in Future Racing, a genre that, amusingly enough, has been highly resistant to formula changes. 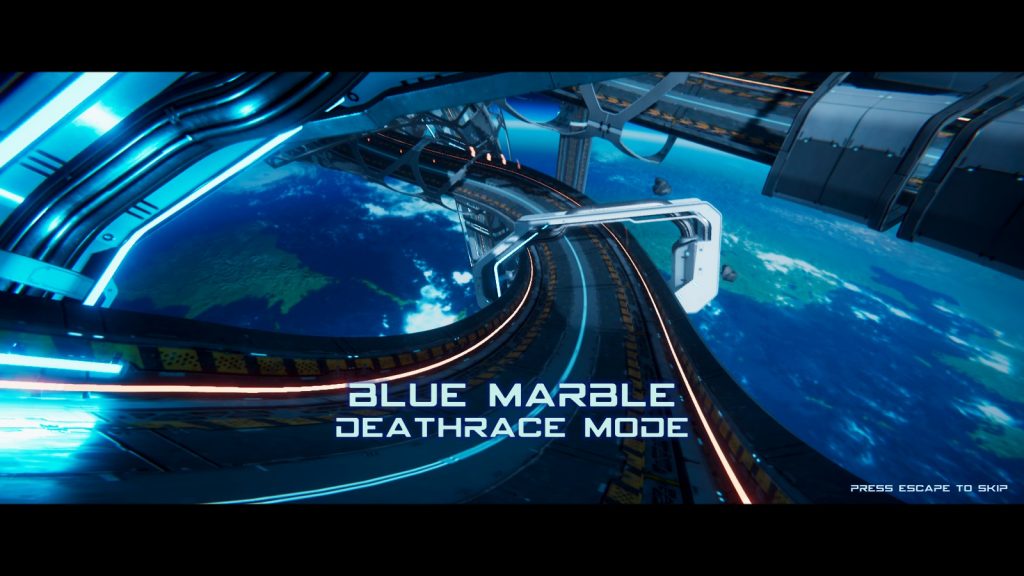 The Mad Welshman likes walls, so he’s glad he’s been given so much leeway to grind against them in racing.