Okay, maybe they do. Fast zombies, big zombies, little zombies… There’s a lot of zombies out there, but Zafehouse Diaries 2, like its predecessor, pretty much sticks with our shambling, flocking, endlessly moaning dead folks. It also tries to update the “Bunch of bigoted assholes are the only ‘survivors’ of a zombie apocalypse” formula Screwfly used in their very first game, Zafehouse Diaries 1, and… 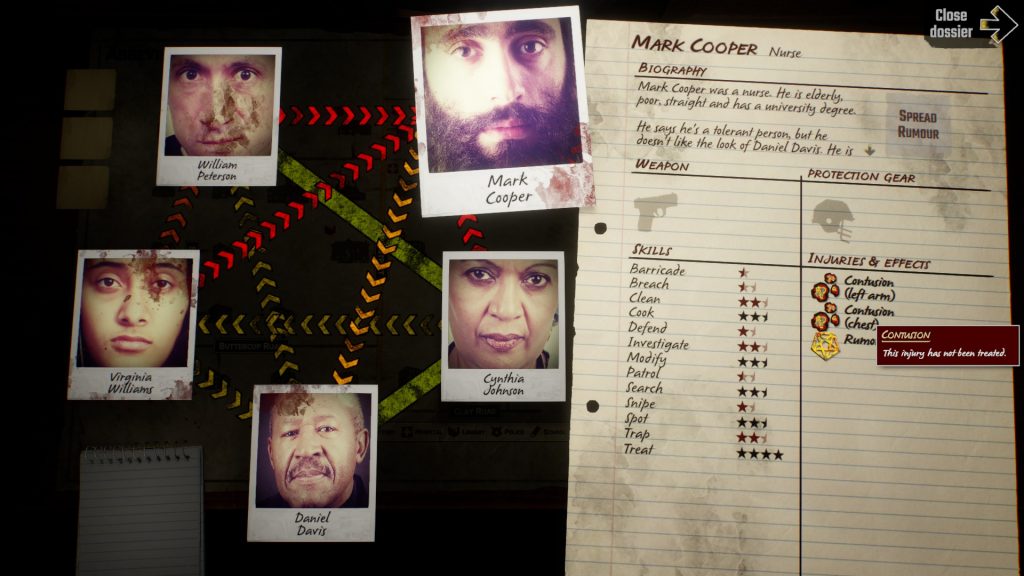 Mark, like many of his ilk, is dancing around the fact that he judges books by their covers, or, more specifically, the *colour* of their covers. Redemption is possible, but I foresee head noms in his future…

…Honestly, Zafehouse Diaries 2 is one I feel conflicted about, because while there’s undeniably more to the game than its predecessor, there’s also more confusion. The Investigate/Snipe/Breach interface, for example, has become a little less clear. Click on the little icon to customise what you’re doing. This is kind of important, because that involves taking things with you, just one example of things you could be doing.

In any case, it’s a turn based strategy game in which you marshall a bunch of survivors, trying to feed yourselves, deal with internal conflicts, and, in at least some cases, try to get the hell out of town. Folks can work together on tasks, but, as in many zombie media, the survivors come from all walks of life, including howling bigots. Timothy, a middle class musician, doesn’t “like the look of” Dana, because he’s a racist. Jeffrey doesn’t like women. Dana, meanwhile, has beef with older folks (like Timothy, funnily enough.) Spreading rumours once a day can improve the mood, but it can also backfire horrendously. Heck, you can do it deliberately, if you really want to. 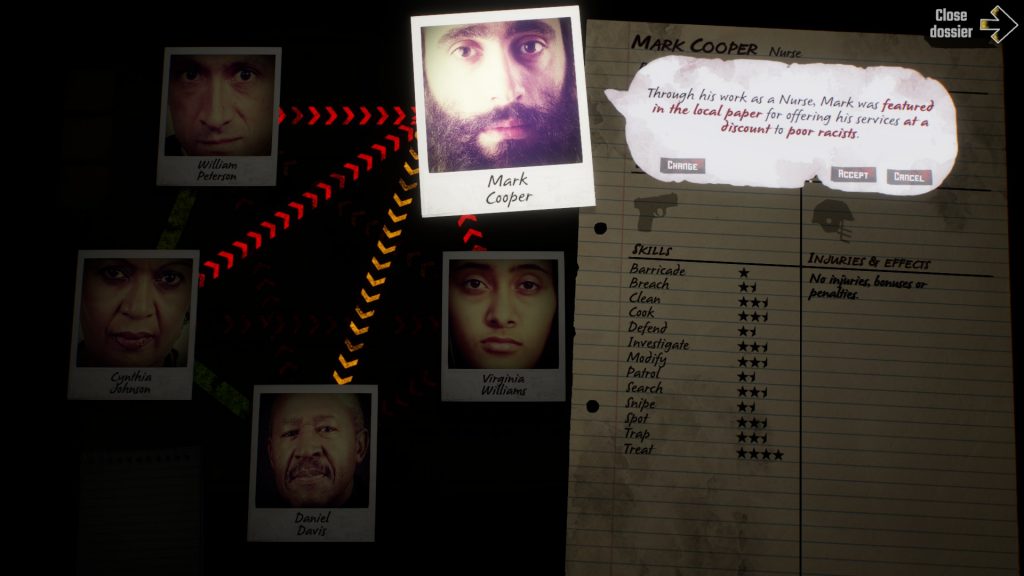 Not gonna lie, I kinda blinked a bit at this rumour. The options are racists and foreigners, and while it makes sense after thought… It did make me blink for a bit.

There are several scenarios, from the return of Road Kill (find a roadmap, a car, a repair manual, and five bits to repair a car to get out of town before everyone dies) to the new Kill Switch (Five soldiers, no relationship problems, stop an airstrike while nastier zombies try to wreck the town’s power grid.) As before, you can add custom content, such as making yourself in the game, but custom content (and indeed, changing the difficulty via the Custom Game option) stops you getting achievements. Similarly, there are events in game, such as the Piper, an asshole in a pickup truck who gives you the option of giving one of your folks as zombie bait, or having a tantrum, and beeping his horn as he drives off, attracting zombies. I hate the Piper.

Sadly, it isn’t the friendliest of games. Although Screwfly have clearly made an effort to improve over Zafehouse 1, making more things clear, such as customising orders, it’s a game where reading the manual (Which is in-game, under Help) is very important.

Overall, visually, Zafehouse Diaries 2 is an improvement over 1 (Although, as mentioned, that Breach/Snipe/Investigate could probably stand to be clearer), it does have more content, and it is a friendlier game than Zafehouse 1, especially with a tutorial, it’s still one you’ll want to explore the UI of before you make a move, and some things still aren’t quite clear (Survivor relationships, for example, affect the quality of their work together.) 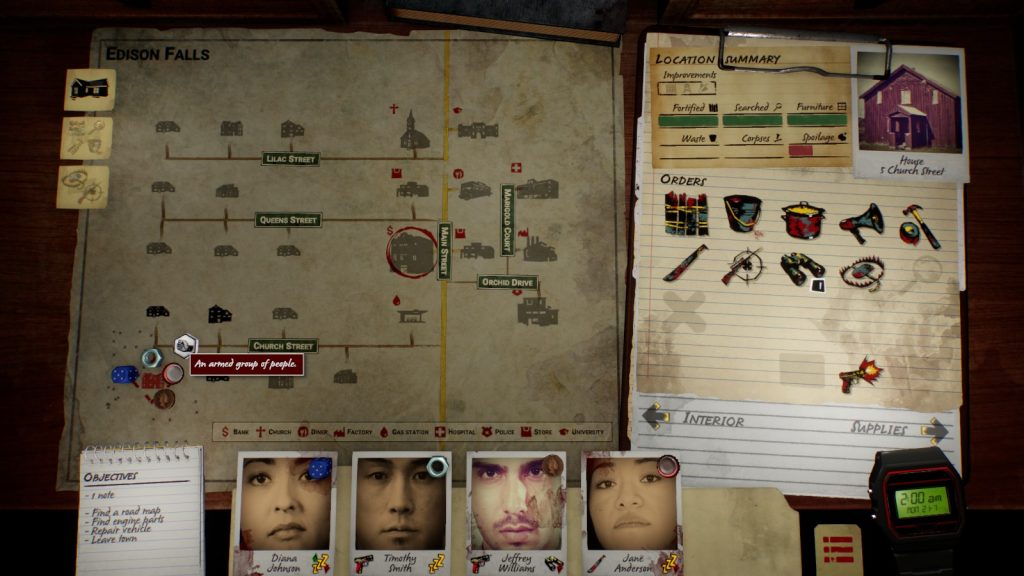 While it’s not pictured, the Breach/Investigate/Snipe button is a post-it note next to Location Summary. A *small* , two-part post-it note. It could do with being a tadge bigger.

The Mad Welshman wants to eat the rich. However, he sees better chances of doing so as a zombie than a survivor.