A question, and a statement, that keeps coming up, if only now and again is: “Why don’t you do video reviews? I’d see you more if you did video reviews!” And, honestly, while I can sort of see the point folks are making (Accessibility, “Seeing the game in action”), I’d like to point some things out.

This Ain’t Exactly Sustainable As Is

Right now, at the time of writing, I get approximately $80-87 USD a month for this. While the writing of each review takes anything up to two hours, the actual reviewing process is a bit longer, and varies wildly by game. I’ve written about this fairly extensively in the On Games Journalism series, but one thing I haven’t covered is video reviews. Below are two images, now somewhat out of date, but still illuminating. Less than a hundredth of the folks who, potentially, look at my work pay for it. On a bad week these days, less than a hundredth of the people who visit the site each week pay for the content produced.

While out of date, this is a nominally “Eh” week, in terms of visitors. 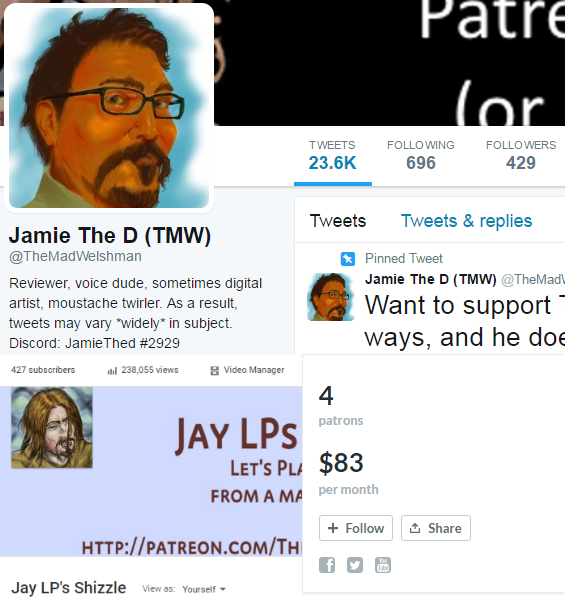 Let’s talk about videos a little bit now. Video reviews require recorded footage. They are, in my personal opinion, best done as post-commentary, which means I’m guiding my words. Similarly, it’s often best if they’re at least edited to show what the hell I’m talking about. As such, recording can take a while, anything up to four or five hours. Editing is going to mean recording commentary, slicing and splicing to fit, and extra stuff that, thankfully, only takes a few minutes more to add, less once it’s nailed down. But even that’s an extra hour or three (The latter in the case of particularly difficult to present stuff.)

Considering that, at national minimum wage, that should be earning my ass approximately £60 GBP a video? You can perhaps see why I’m leery of this. You can also, perhaps see, when I point out that just two of those videos a week would ensure I have no safety net, as 16 hours is the point at which state benefits (AKA – The Safety Net) is pulled out from under my ass, which also takes the rent with it.

Two, probably less than 30 minute videos, more often ten minutes for the brevity many folks demand in their reviews would, no joke, have the real potential to make my ass homeless. Hilarious, isn’t it? Let’s use an example from my earliest days, when I was young, and foolish, and got exactly nothing for this task. This review, by the way, led to my editor of the time asking for a re-review, something most games journalist will flat out turn down, let alone their editors.

This one was relatively short to edit, at an hour and a half for recording (Three or four races), half an hour for commentary (I knew exactly what I was going to say), and three hours for editing, encoding, and uploading (I had a bad computer then, but I also wanted to splice footage in a sensible manner.) It’s perhaps unsurprising, considering racing games are among the easier ones to splice footage for. Which leads us nicely to the second subject.

Your Mileage May Vary

Video reviews vary in usefulness by a number of factors. With something like Blur, I can get across the gameplay quickly and consistently. But what about something like Offworld Trading Company, or Crusader Kings 2, or Endless Space 2? There’s a lot more going on in many of those, and it’s not exactly obvious a lot of the time. There is also, sadly, another minefield waiting here: OMG SPOILERS SPOILERS SPOILERS. I’ve already talked about spoilers in reviews elsewhere, and navigating this particular minefield (In which, as ATLUS recently demonstrated, can come from the developers and publishers as well as the audience) is an added risk.

With a written review, I can still be clear, show off some things, talk about things, and, funnily enough, it’s easier to navigate the Spoilerfield, because there’s more than enough going on to focus on. It helps that I don’t like repeating myself. Of course, with videos, it doesn’t help that I don’t like repeating myself. If Gamerfill still existed, you would have seen me make many of the same points in the review that I make in the video (And, indeed, the re-review, which is one of the rare times that happened at all.)

…Did I mention that I really dislike repeating myself?

Anyways, this has been a brief summation dealing with the question of video content for TMW. Want more? Support the writer. Then the writer can pay his bills. He has more time. He spends less time worrying about said bills, and can, potentially, pay other writers, who also have more time and spend less time worrying about bills. If you really, really want video content, then you’re gonna have to be able to reassure me I’m not going to lose out by doing so.

Thank you for your time.