Source: Cashmoneys
Price: £14.99
Where To Get It: Steam, GOG, Humble Store

It’s no exaggeration to say that The Sexy Brutale, by Cavalier Games and Tequila Works, has been the high point of my month. Not least because it’s so pleasurable to see a game so delicately planned that the keyboard and mouse control scheme, while a little clunkier than controller, has a neat little touch that made me chuckle. 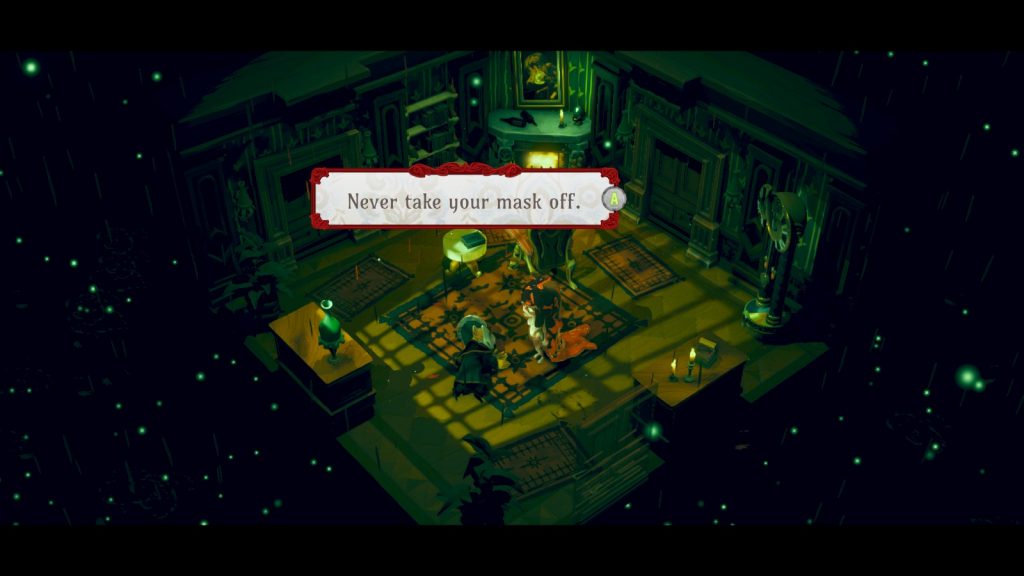 Reversing time is bound, on keyboard, to F1. I’d like you to think about that for a second, and chuckle with me. It’s nice and subtle, and a good segue into the rest of the game.

The Sexy Brutale can best be described as a stealth puzzle adventure with almost Metroidvania elements, in that solving the puzzle (Which, funnily enough, involves using your time travel and stealth powers, gifted to you by a lady made of blood) gives you extra abilities that will unlock new areas, new people to save from a devilish casino and its employees that, all of a sudden, has stopped fulfilling dreams, and is now murdering folks in blackly fitting ways. Ways that range from the mundane (Poison drinks, a stabbing… It was the 8 of Diamonds, officer, in the Church with the Rifle!) to the bizarre (This is a good time to mention that the game has something that arachnophobes may want to steel themselves for: A giant spider. Just the one, as far as I know, but… Be warned) 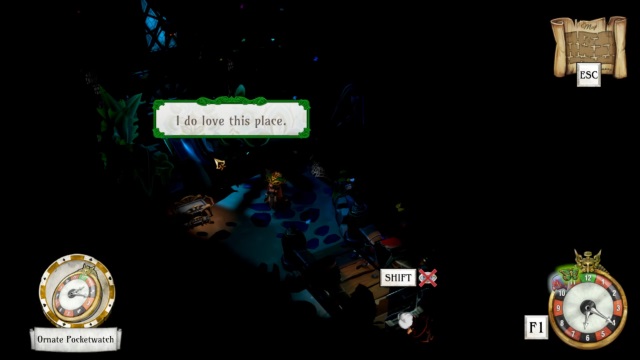 The game has Content Warning: Arachnophobia. Thematically appropriate, considering the mask, but yeah, you have been content warned.

But I’m not saying any more about the plot, as this is a moderately linear game, and instead, I’m going to try and persuade you by telling you just how accessible it is, and charming to boot.

First up, aesthetically, the game is beautiful. While the models are not hand-painted, they are stylised in such a way that you could almost believe they were, and the exaggeration helps make this game keep a somewhat light hearted tone despite the fact that, y’know, it’s a supernatural murder party. Similarly, the swinging music helps the mood immensely, from when it’s jazzy and breezy, to the tense tunes when time… Is running out. Everyone is a character, even the Playing Cards, the murderous henchmen, and it says a lot that I was perfectly fine with both watching the demise of the characters for their speech, and spending a lot of time making sure I knew everyone’s route, rewinding the clock to get collectibles, story, and the like. It’s a game where, thanks to the time mechanic, and the usefulness of a map that tracks characters you’ve seen during the day (As long as you’ve seen them, that is), I don’t feel bad about taking my time. 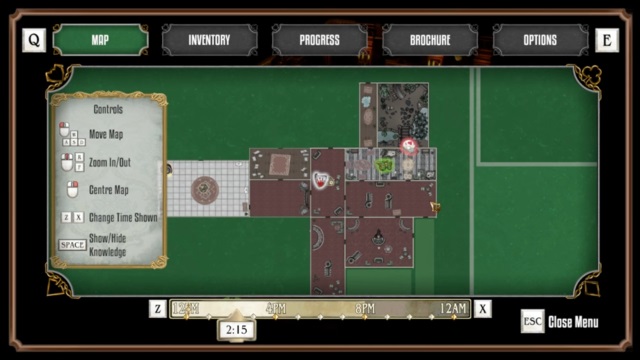 The game encourages me to explore as a result, and that’s a good thing. Similarly, the differing control schemes of the game are both understandable, from the mouse and keyboard’s Dungeon Siege like “Hold right mouse to move, left click to do things, and then keys” to the controller’s “Right stick to move, face buttons and trigger to do things.” So it’s an accessible game too. Things are highlighted, the consistency of the UI is a delight…

…It’s very rare I can say that I don’t have anything negative to say, but I’m quite happy when it happens. The Sexy Brutale is one such game, as it’s accessible, charming, and the clues to its puzzles are uncovered organically. Recommended, and gladly.

The Mad Welshman wears a wolf mask. Well, he would, if the damn thing wasn’t using american shipping. He really wants a nice wolf mask. A red one.